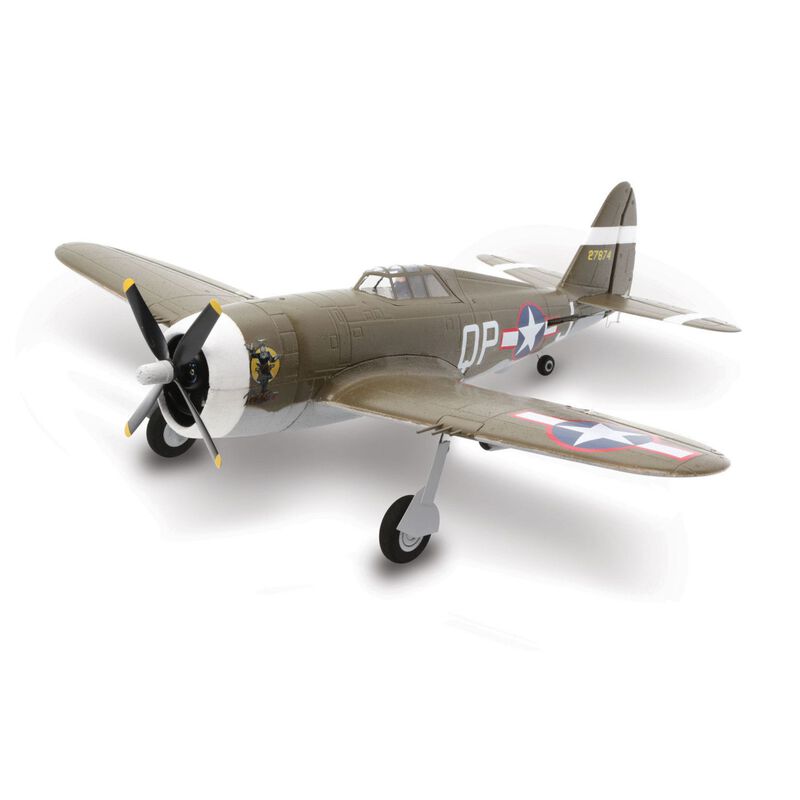 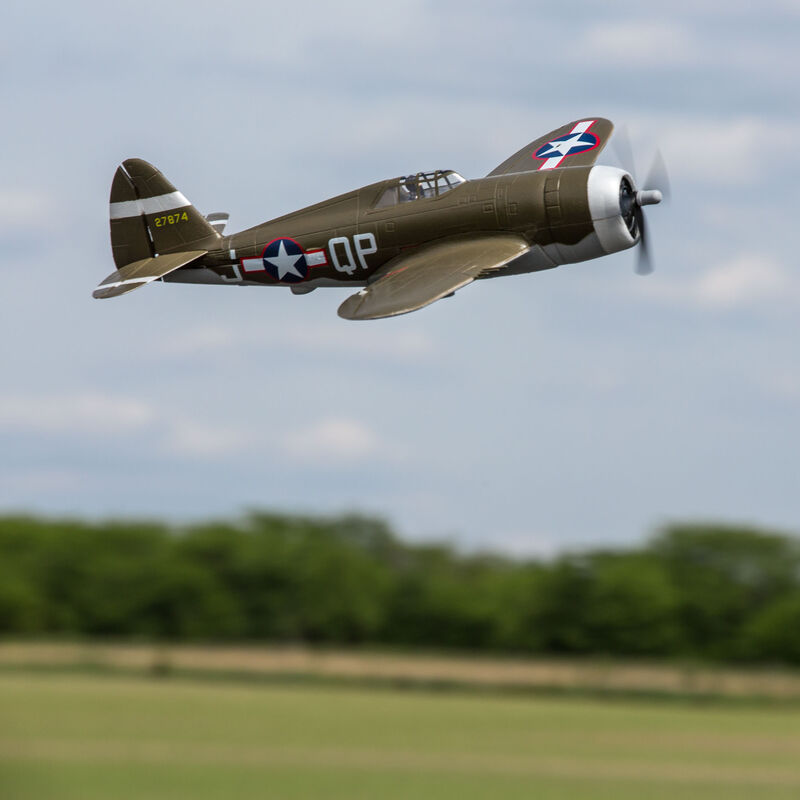 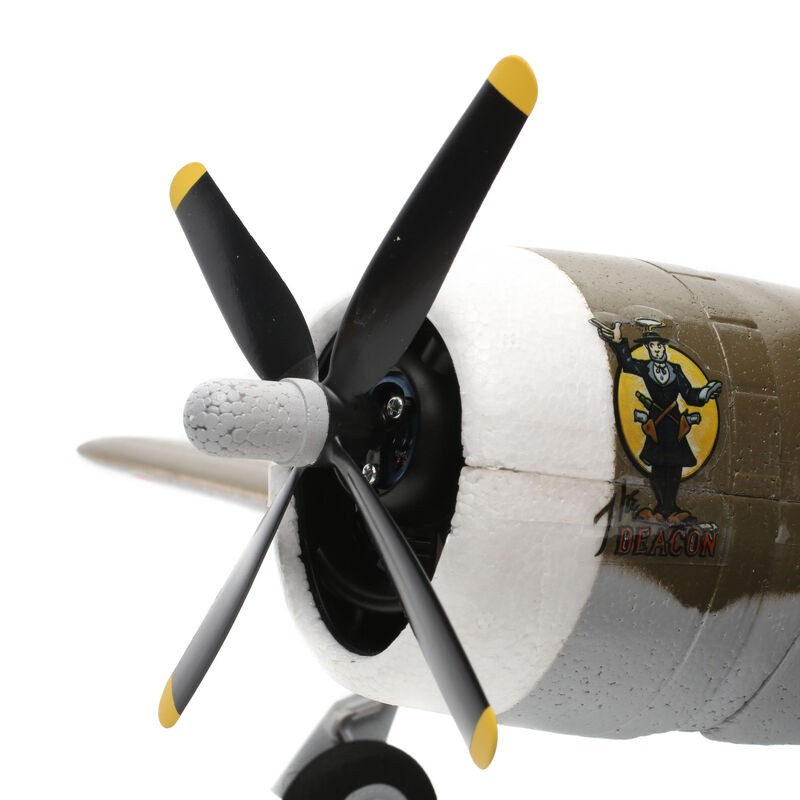 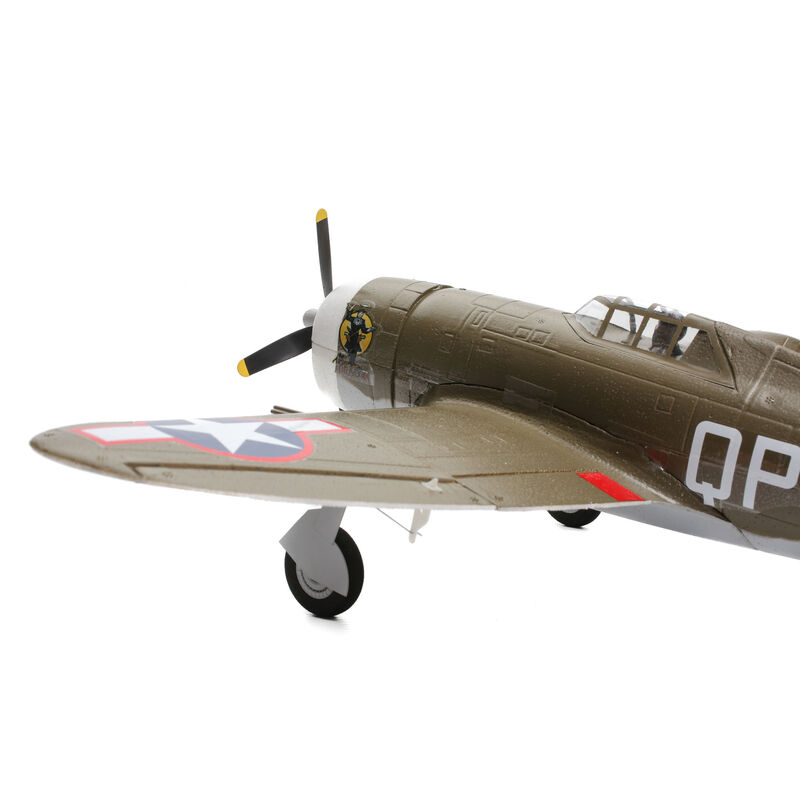 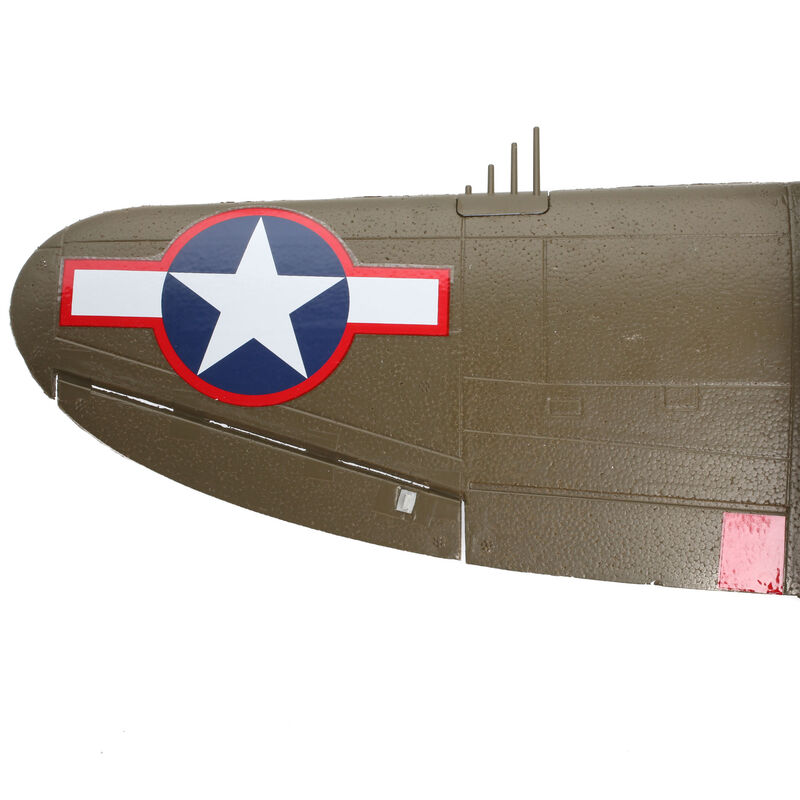 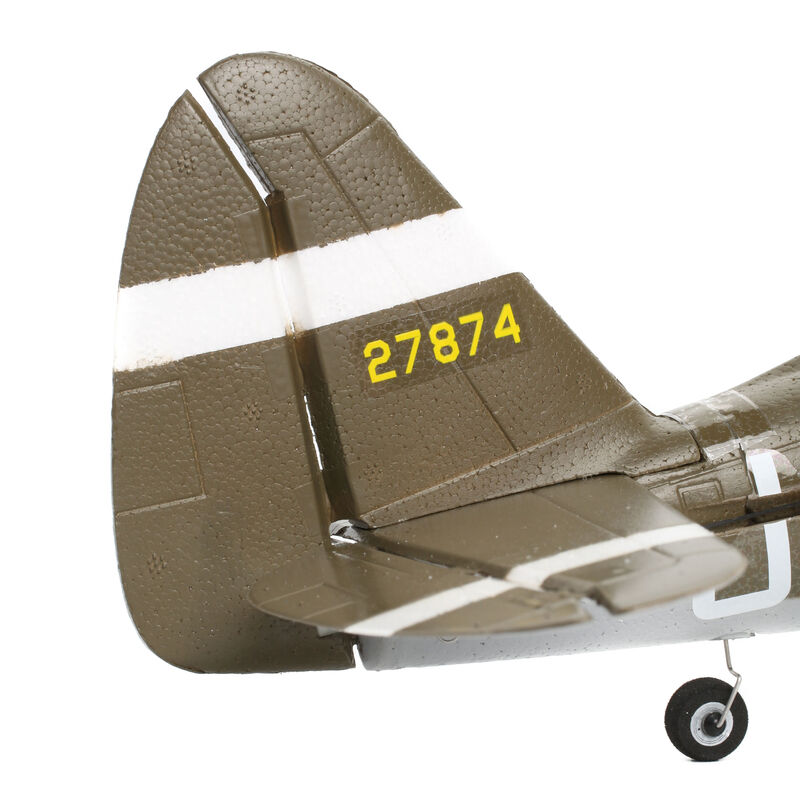 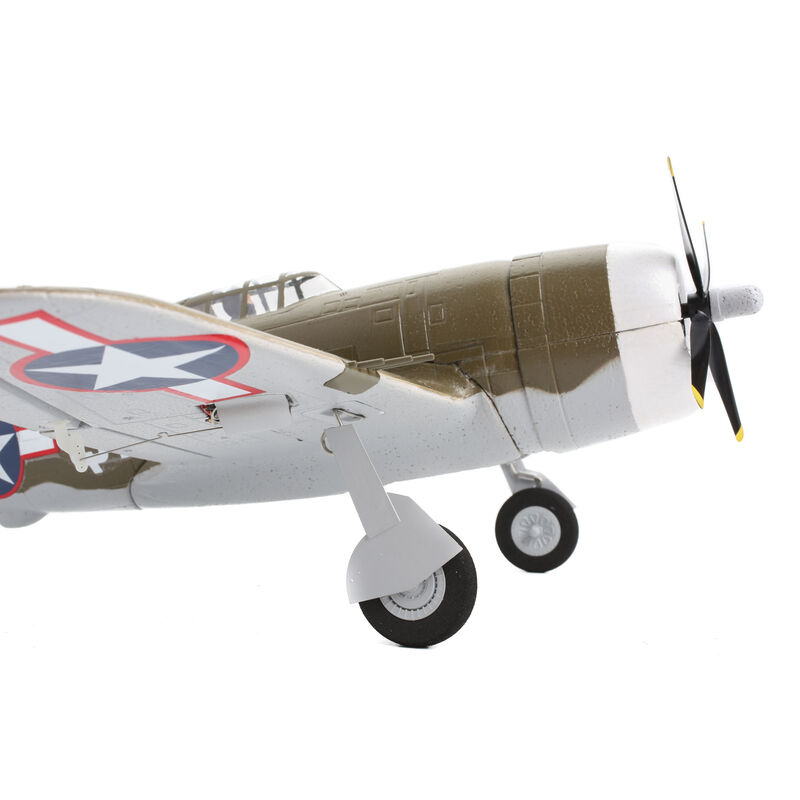 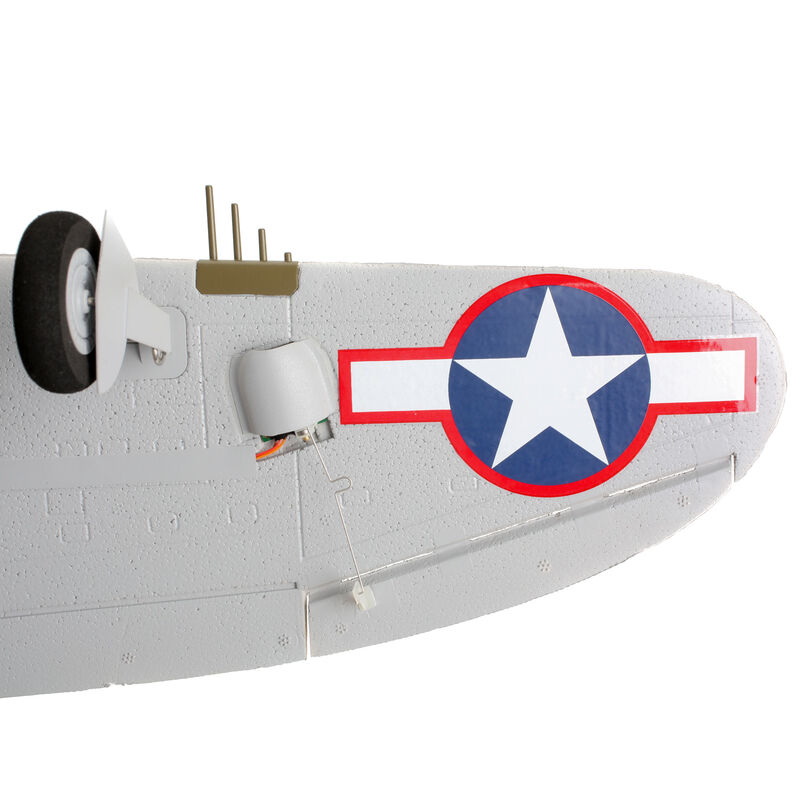 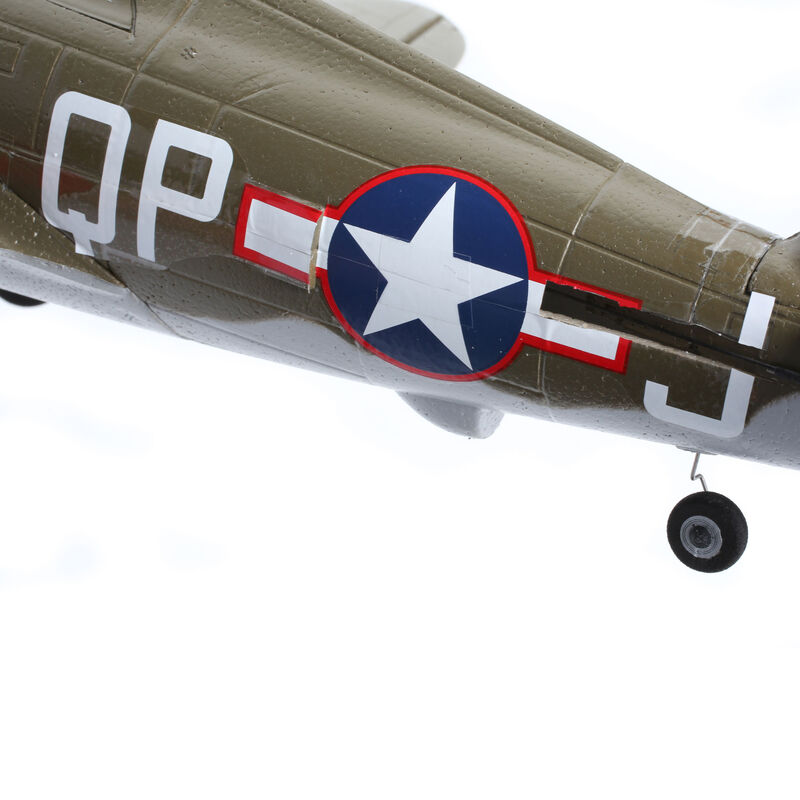 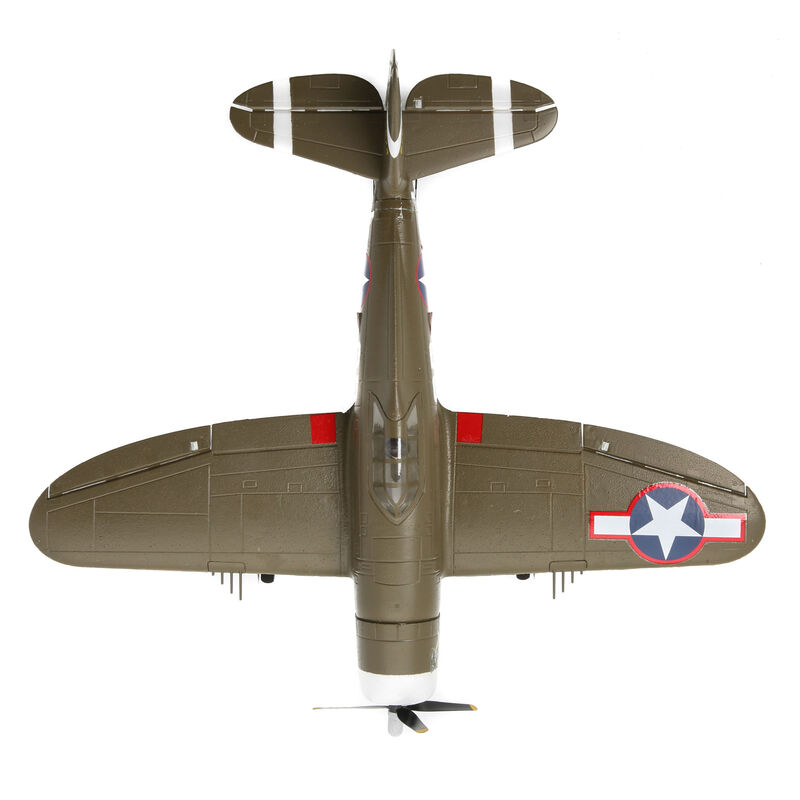 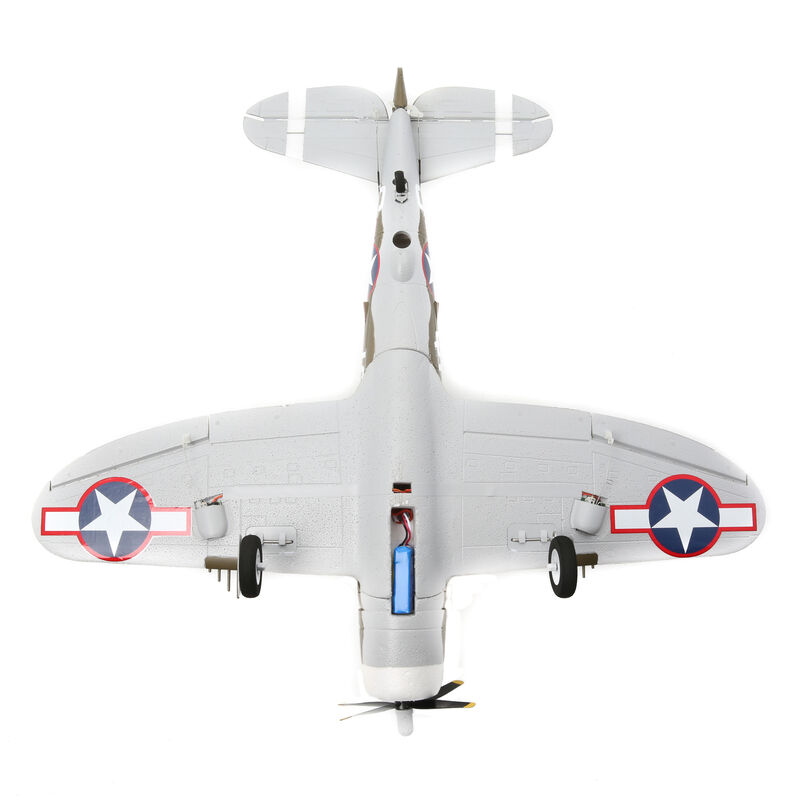 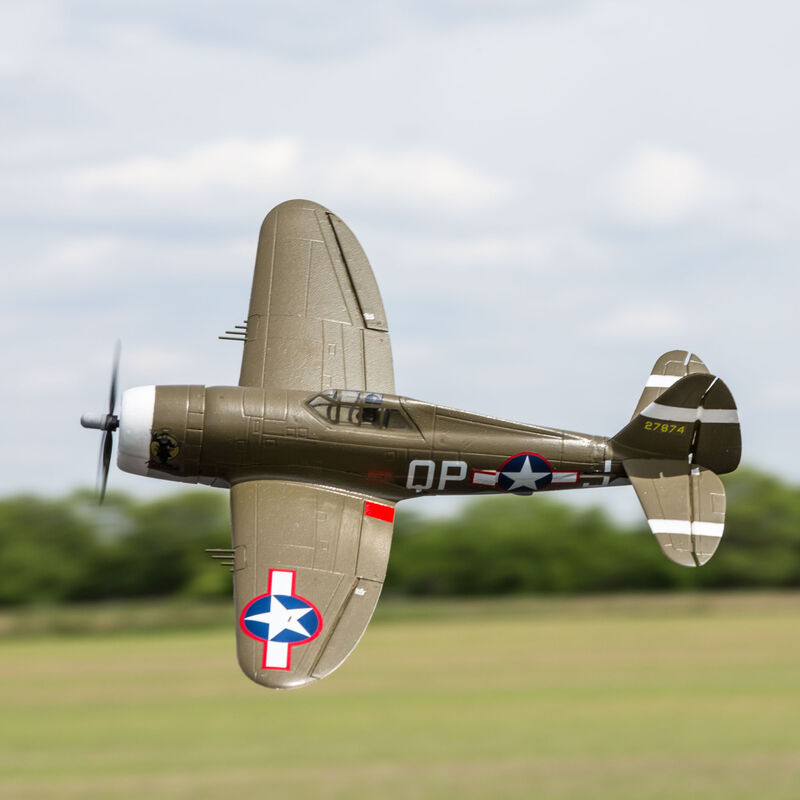 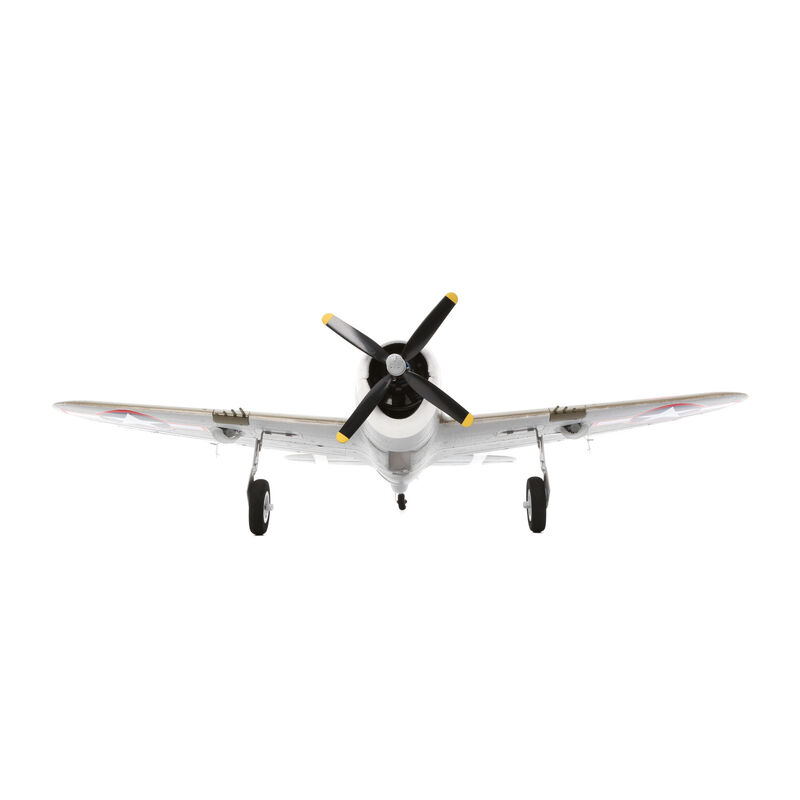 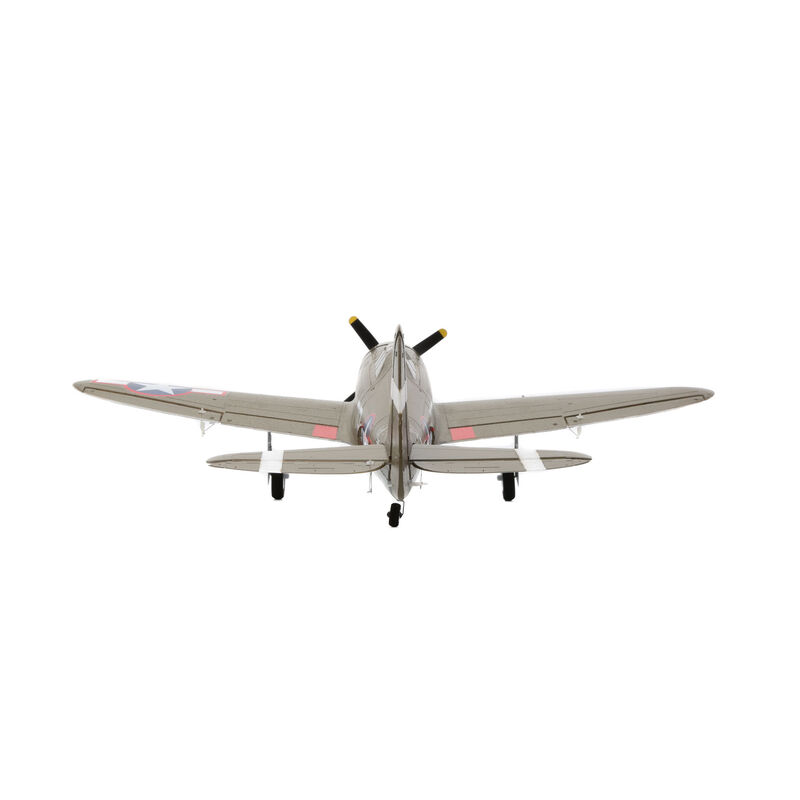 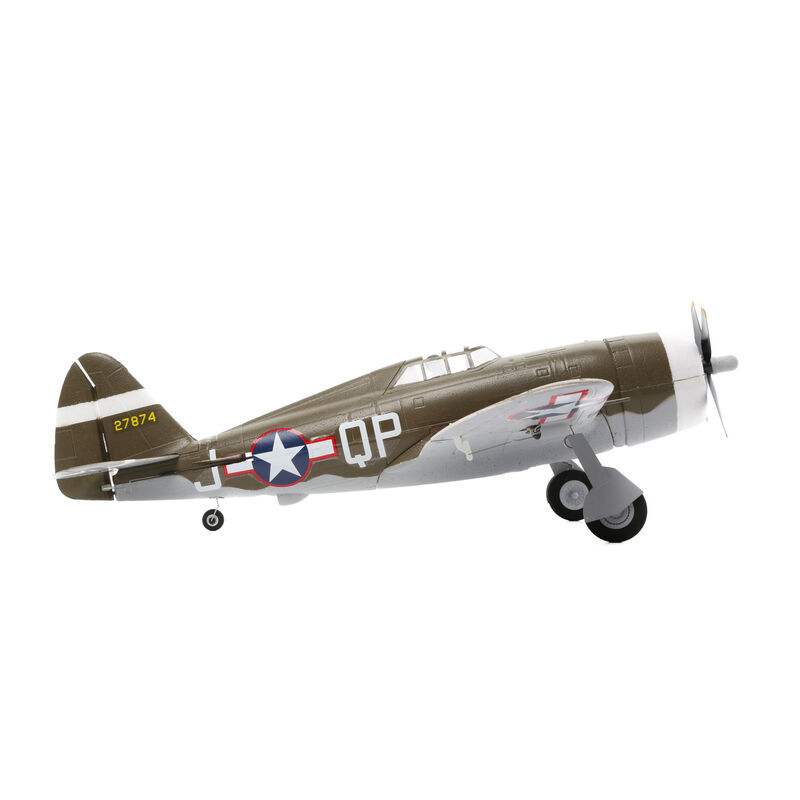 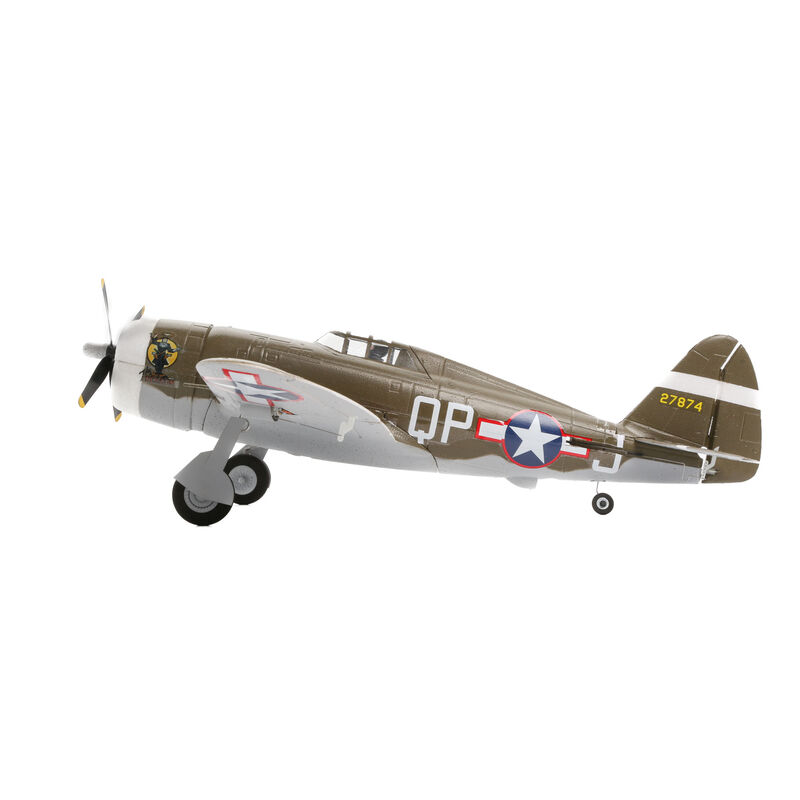 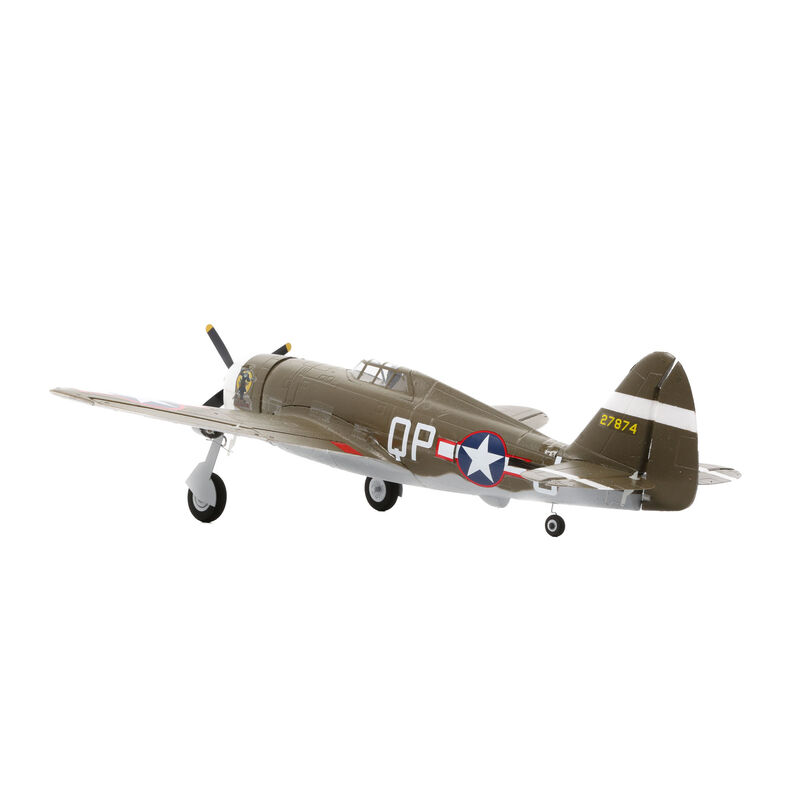 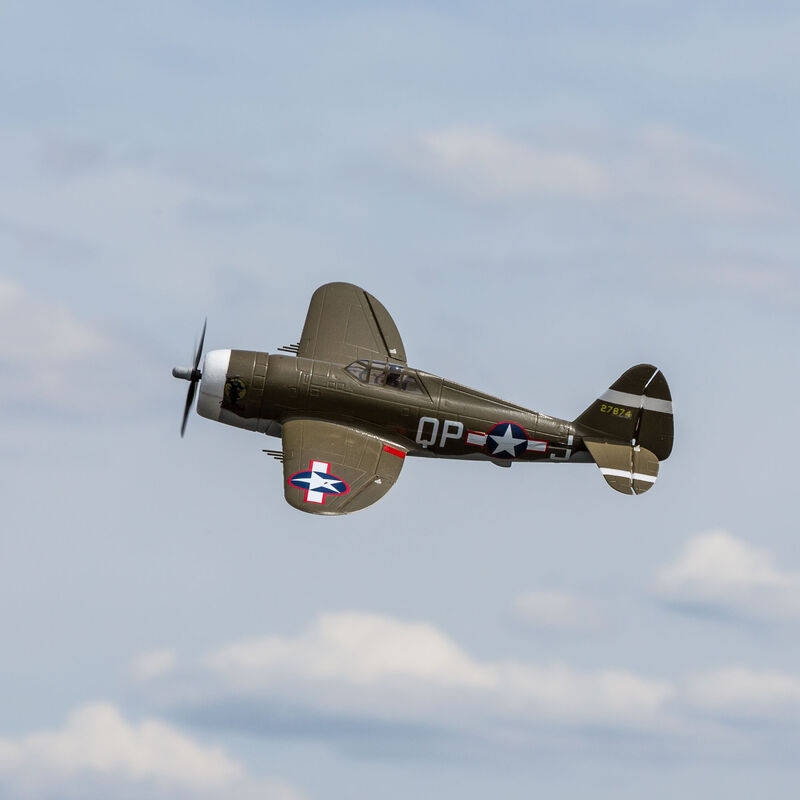 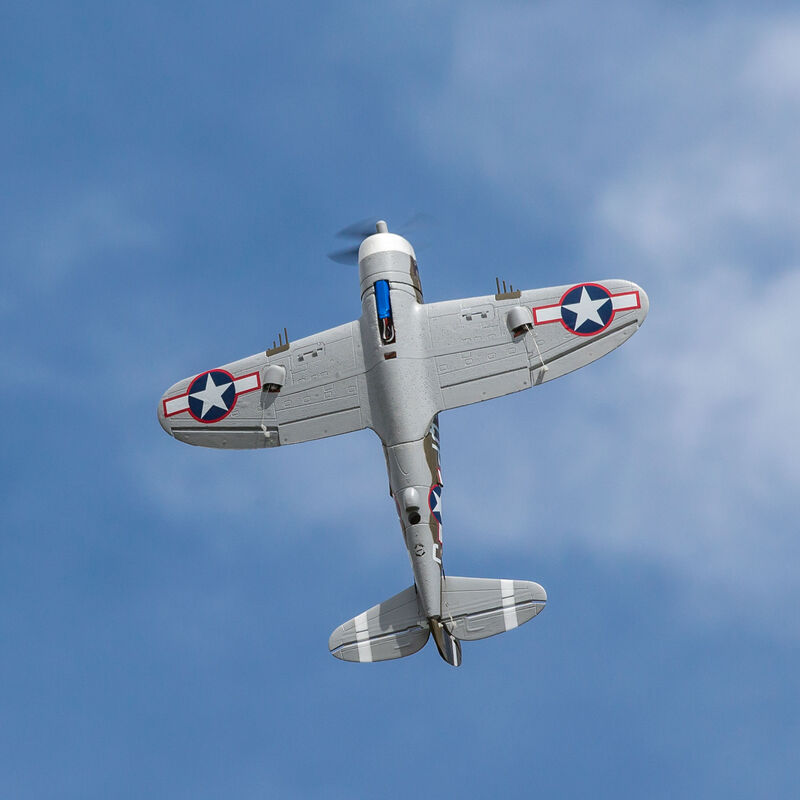 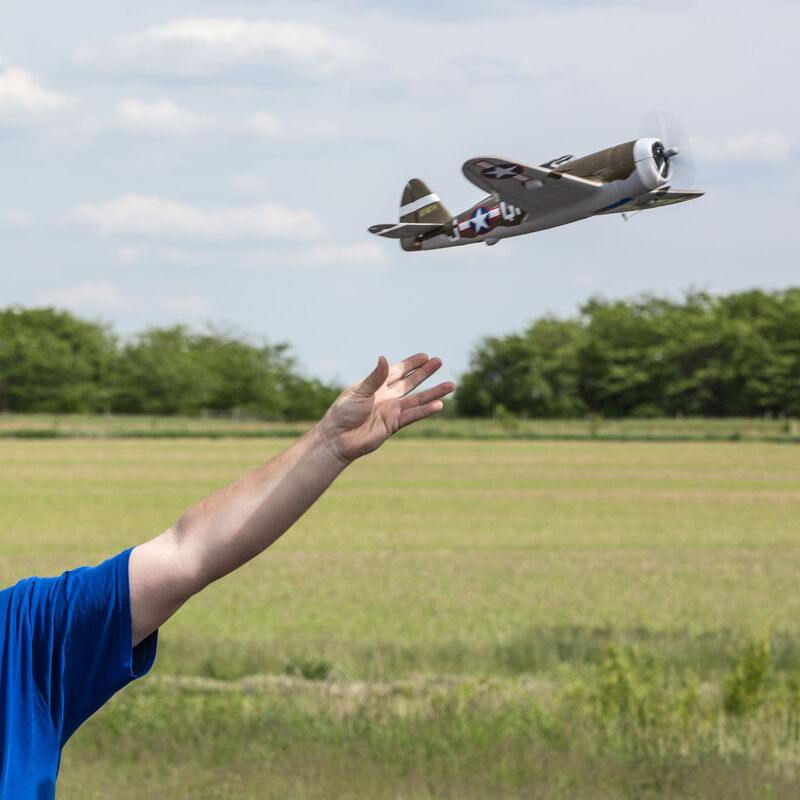 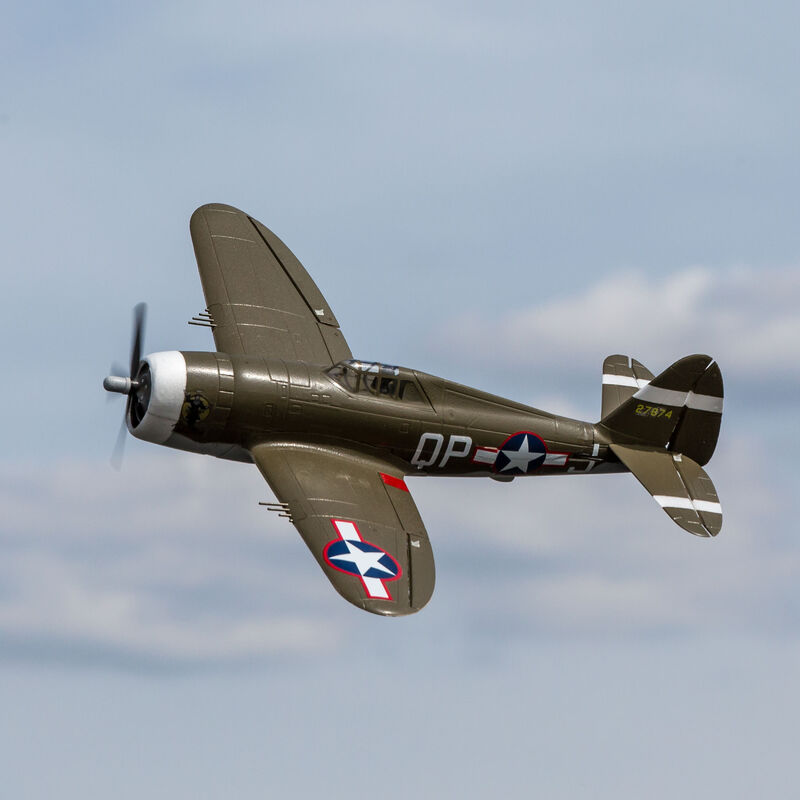 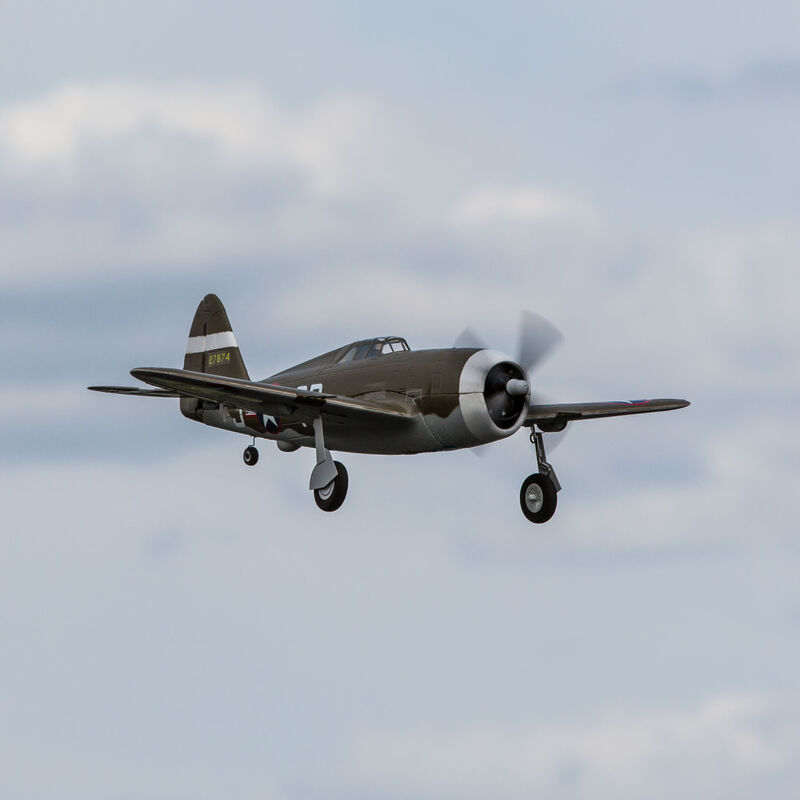 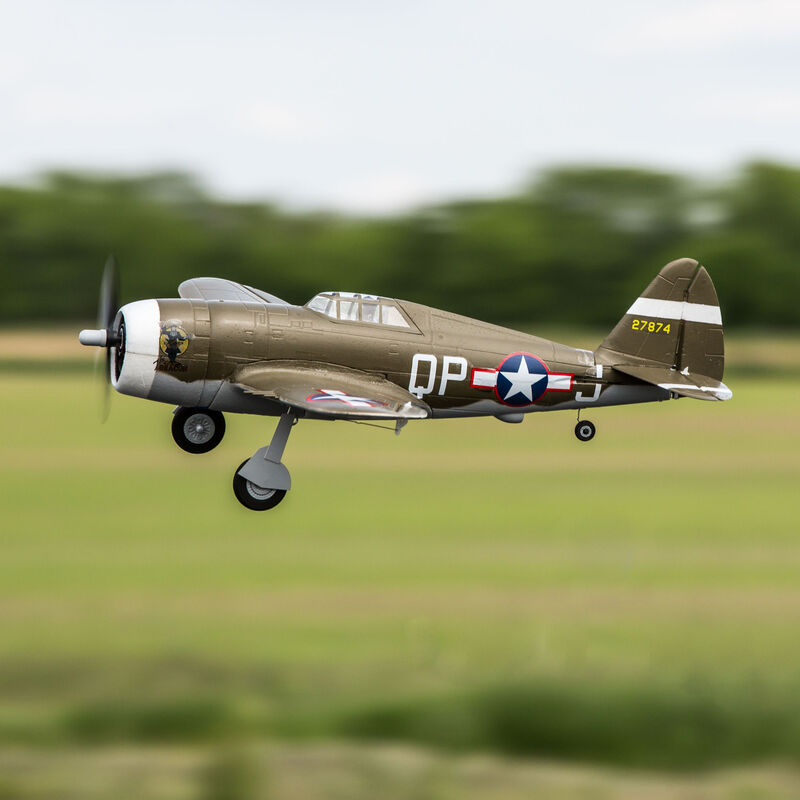 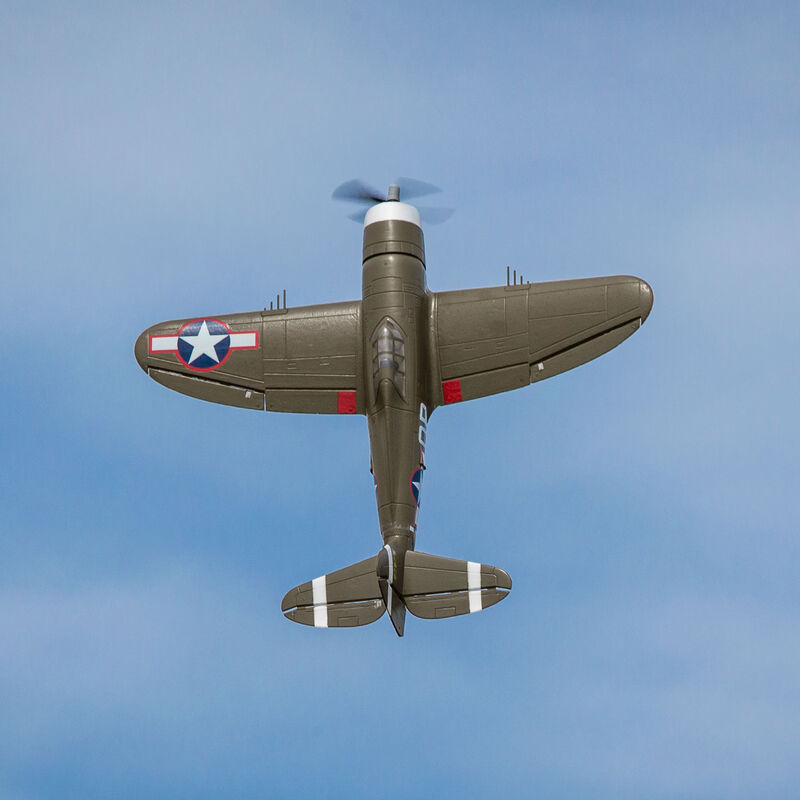 The P-47 was built to give the pilot the most power possible. Nothing is more evident to this point than the shape of its fuselage which was designed around a revolutionary supercharger which gave the eighteen-cylinder radial engine its full-rated horsepower even at 30,000 feet. Combined with eight 50-caliber machine guns and a complement of bombs or rockets, the P-47 proved how versatile it could be especially when its superior diving capability was used to pounce on both air and ground opponents. The E-flite® UMX™ P-47 BL combines brushless electric power with a potent 2S Li-Po battery system for a commanding ultra micro warbird that's sure to make flying this fighter an exhilarating experience.

The E-flite® UMX™ P-47 BL model is a warbird designed to satisfy fighter fans who want a scale ultra micro with gusto. Its lightweight foam airframe features a realistic outline and stand-out details. Packed inside are a brushless motor and a 2S Li-Po ready power system turns a realistic four-blade propeller. With the gear removed, the performance of this Major Howard D. "Deacon" Hively, P-47 tribute can fully come to life yet still offer the ability to land softly onto a grassy corner of the field. Or, you can leave the wide-track landing gear plugged in and use the steerable tail wheel for authentic ground handling. But no matter how you fly, innovative AS3X® technology makes this warbird perform as if you're at the controls of a giant scale machine that's been expertly tuned. Great handling, awesome performance—this is the ultra micro warbird you've always wanted.

The advanced AS3X® (Artificial Stabilization – 3-aXis) system built into the Spektrum™ 6-channel ultra micro receiver is what helps give the E-flite® UMX™ P-47 BL warbird an incredibly solid look and feel in the air. As a result, your workload to fly smoothly is significantly reduced while your control always feels natural so you can make your maneuvers look great more easily. It's an impressive flight experience that will have you feeling like you're flying an expertly-tuned warbird model that's much larger.

Both main wheel struts and the tail wheel plug in so they are simple to remove for when you want to fly with the look of retracts up and locked.

This P-47 tribute is based on the Thunderbolt Major Howard D. "Deacon" Hively flew with the 334th Fighter Squadron stationed in England during WWII. The realistic trim scheme is complemented by the dummy engine, scale wheels and four-blade prop.