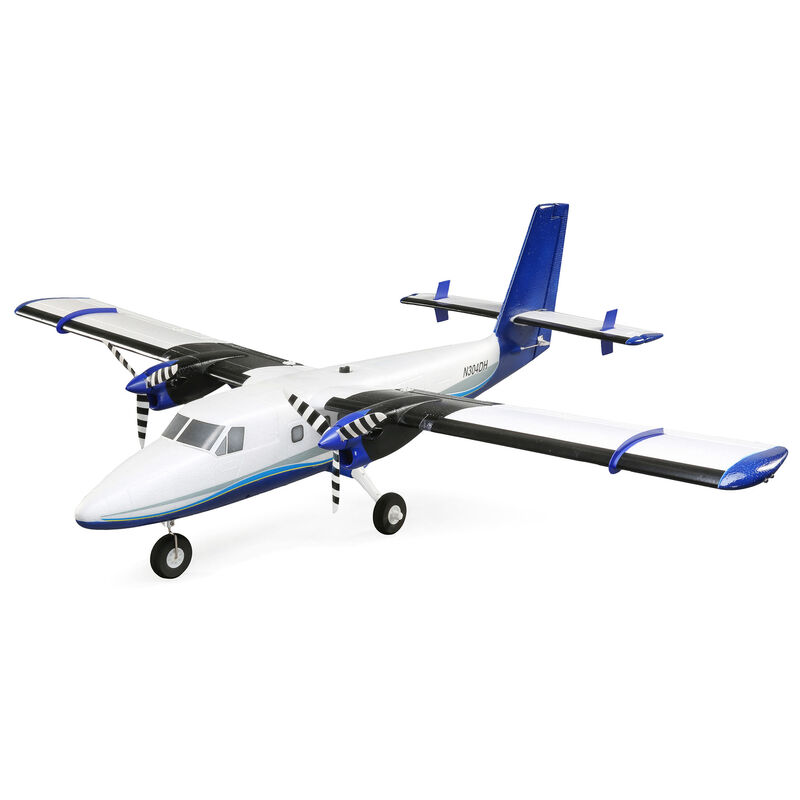 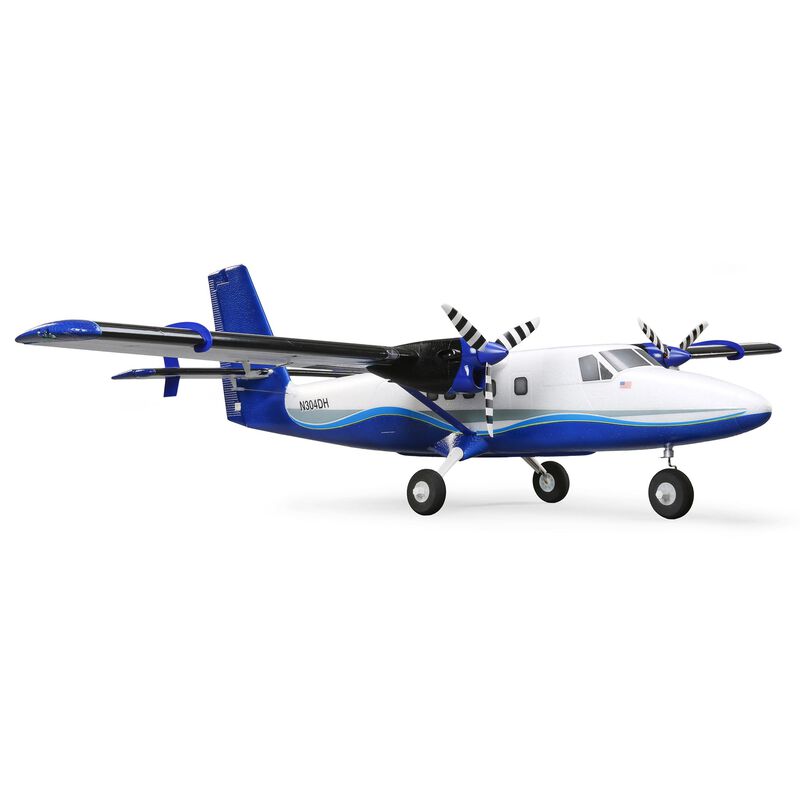 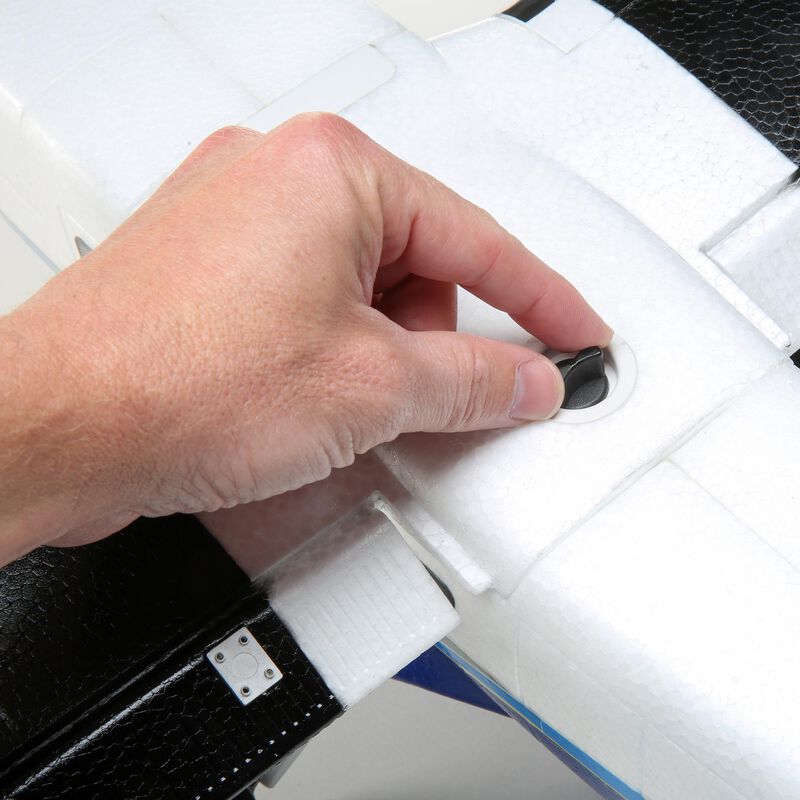 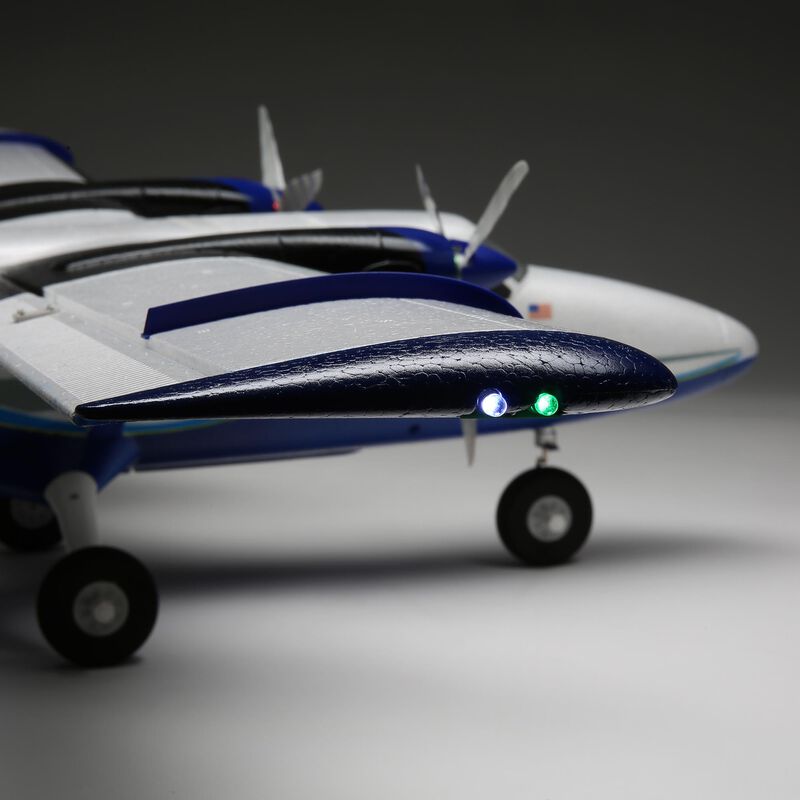 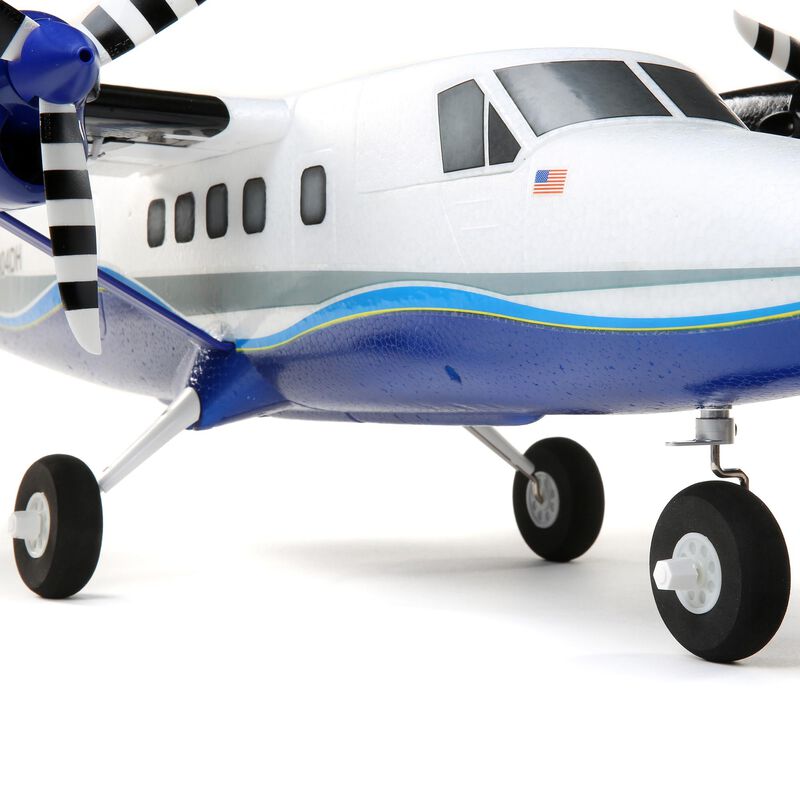 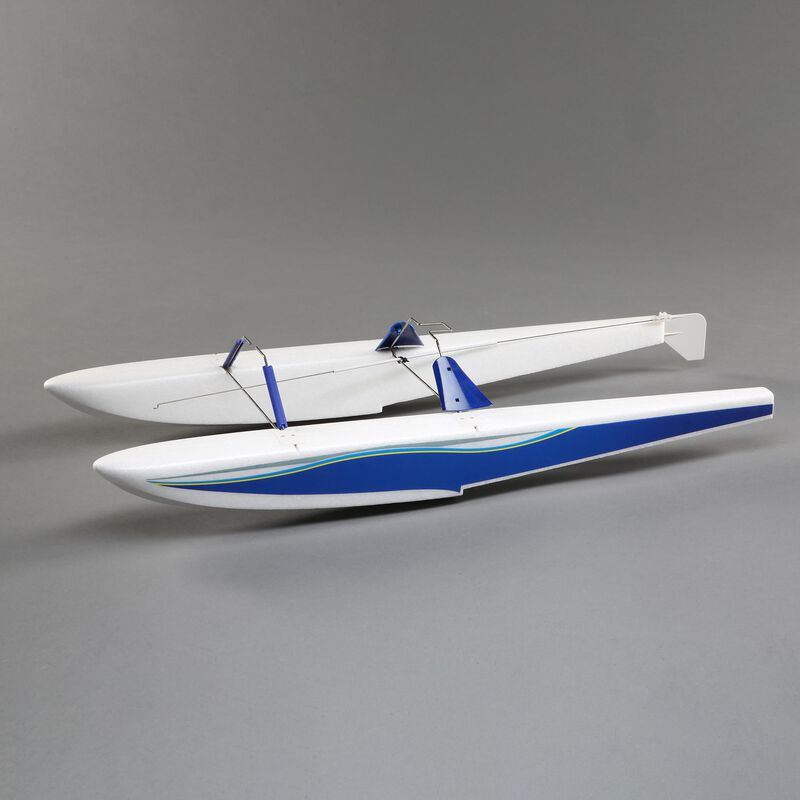 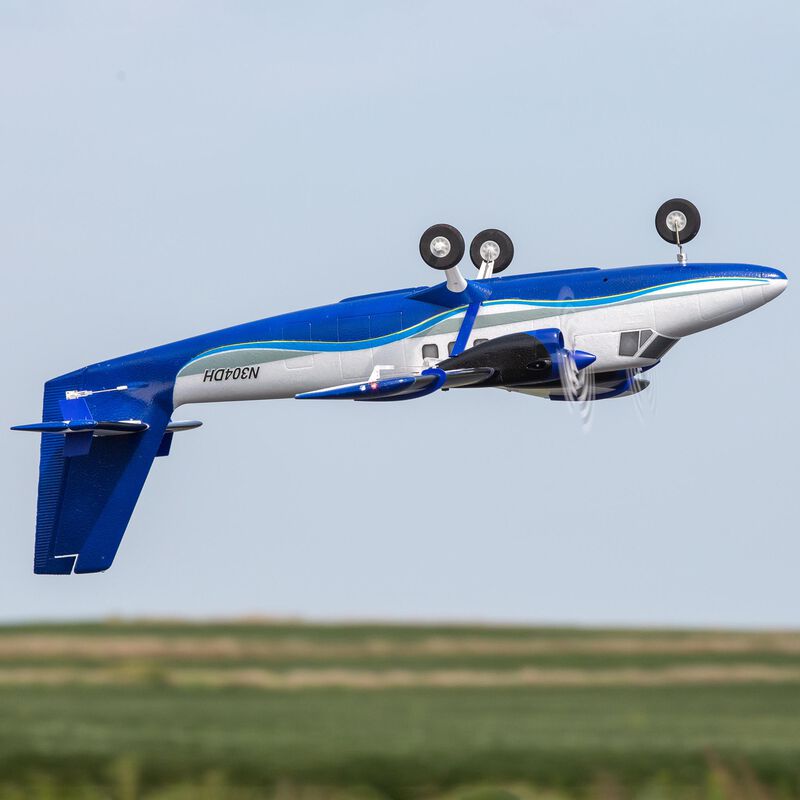 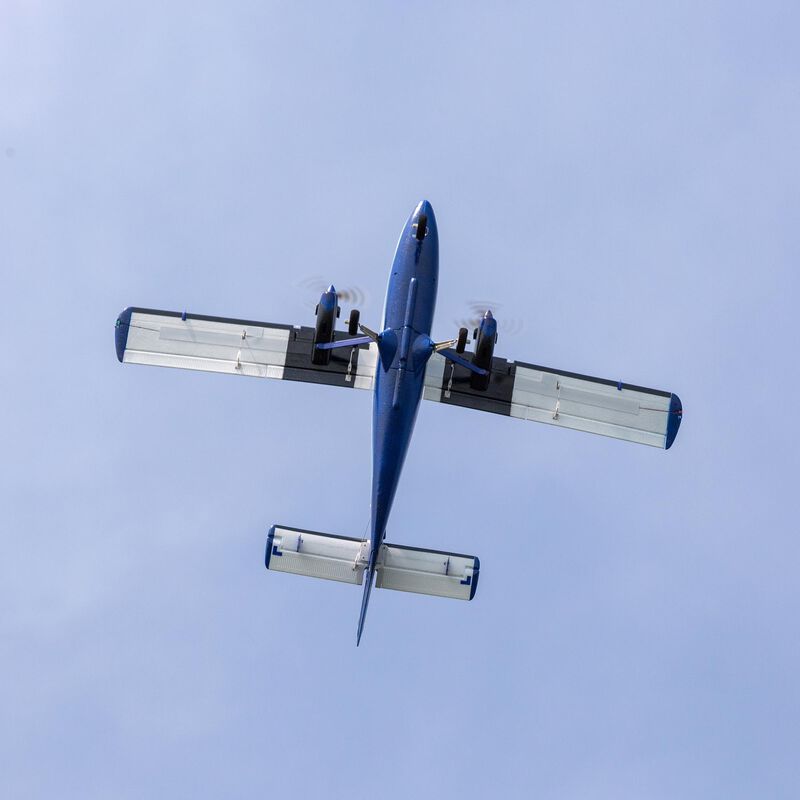 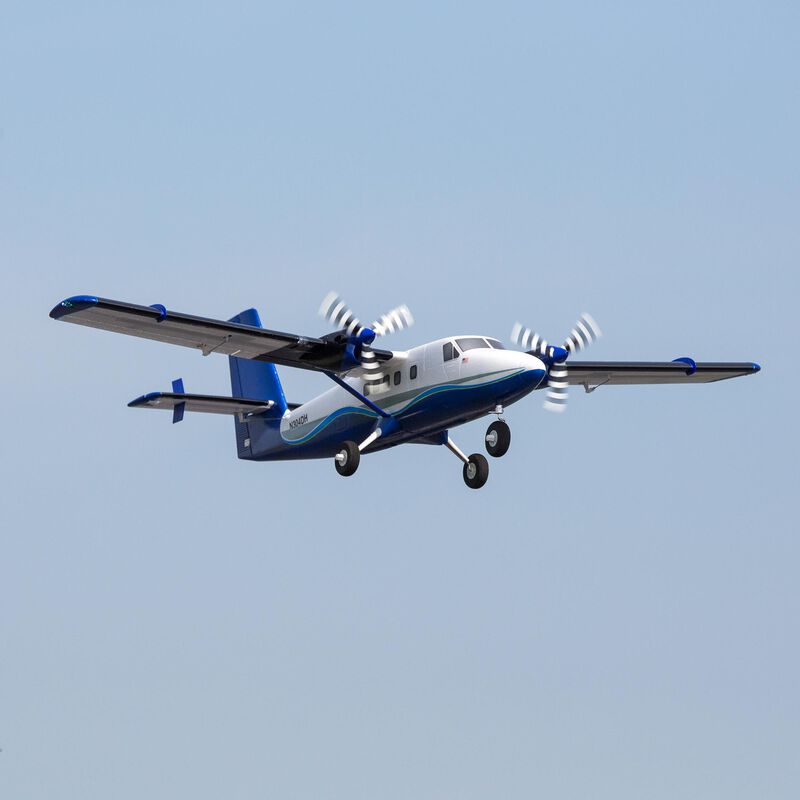 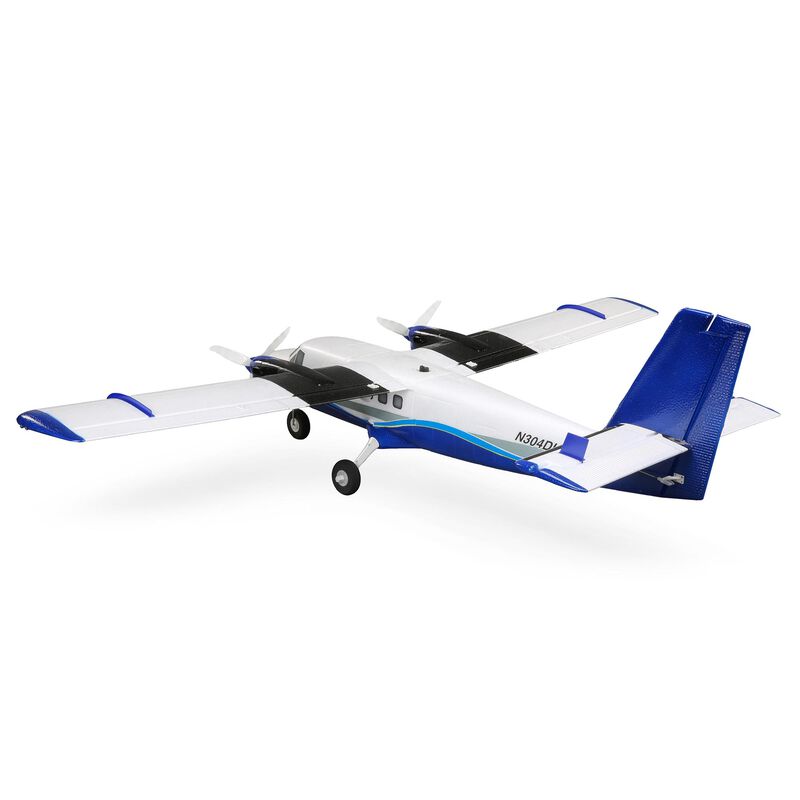 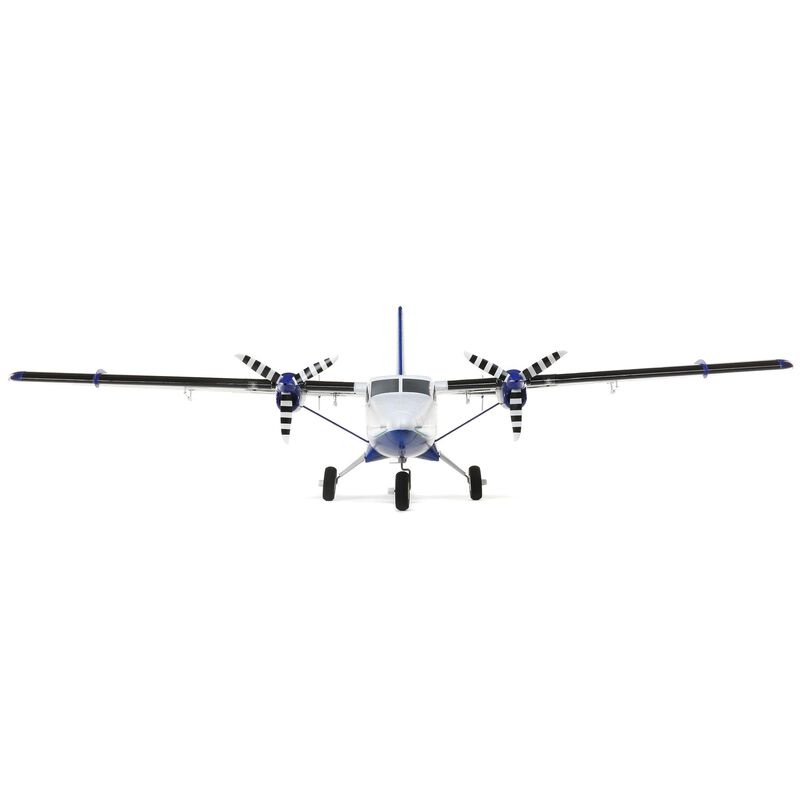 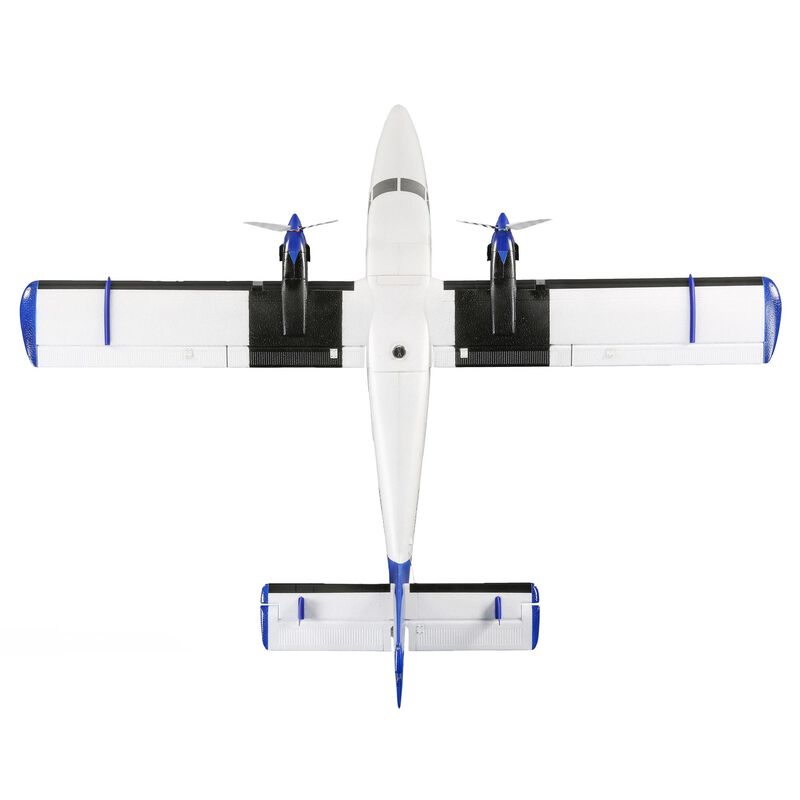 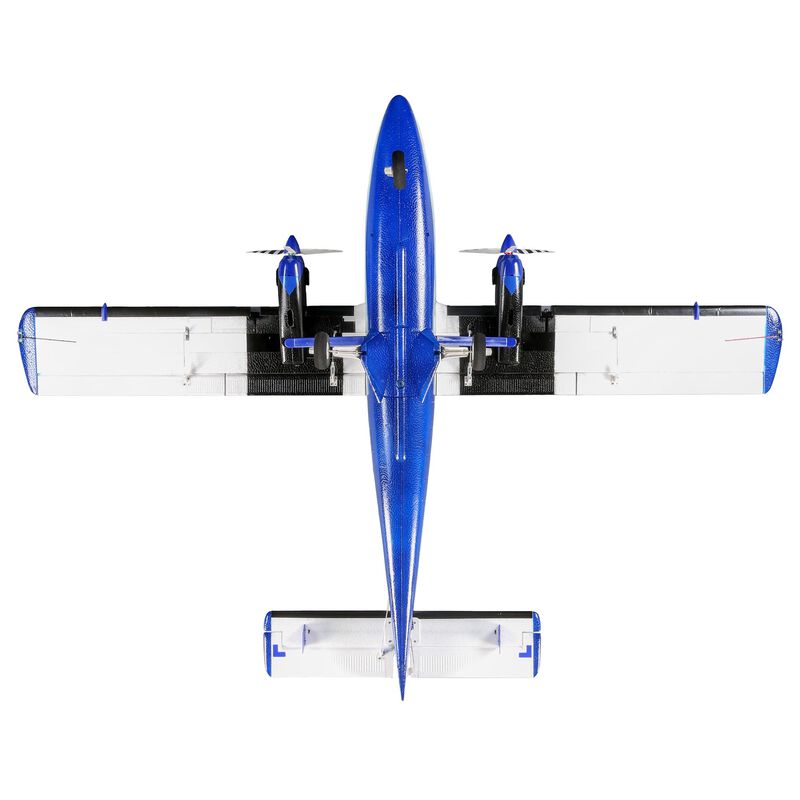 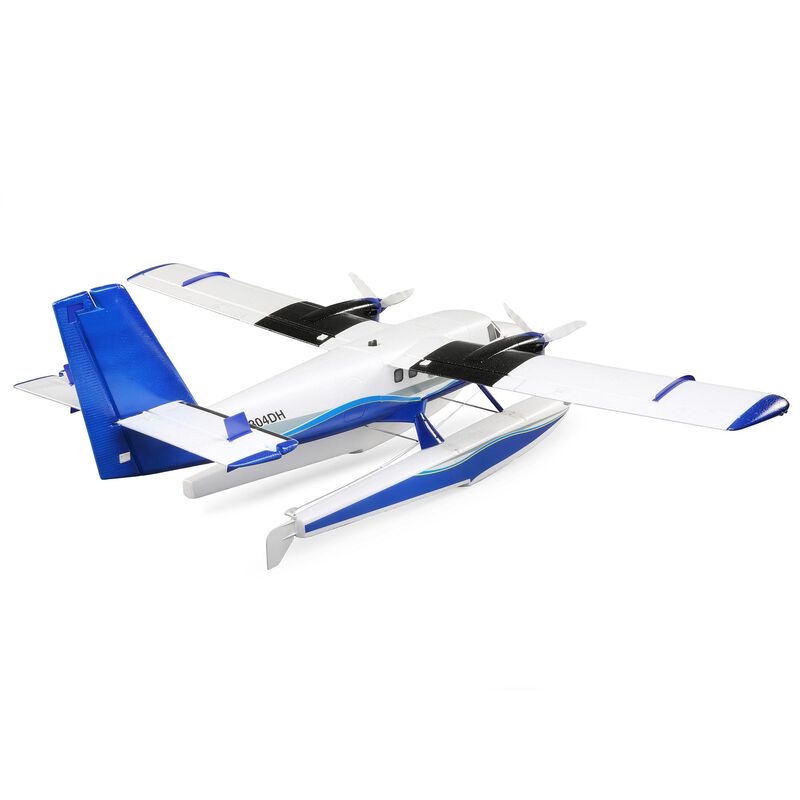 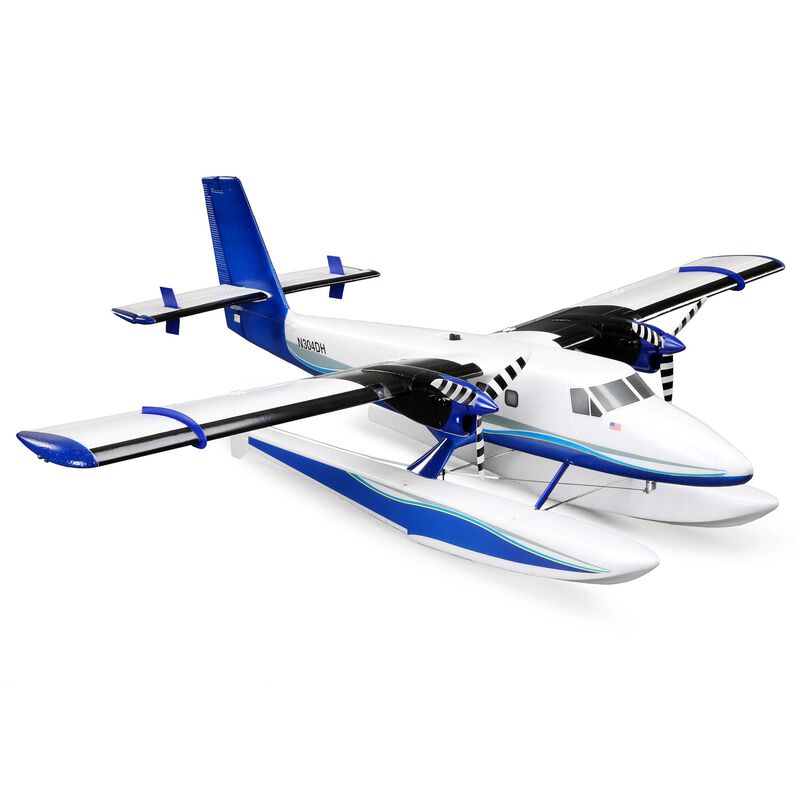 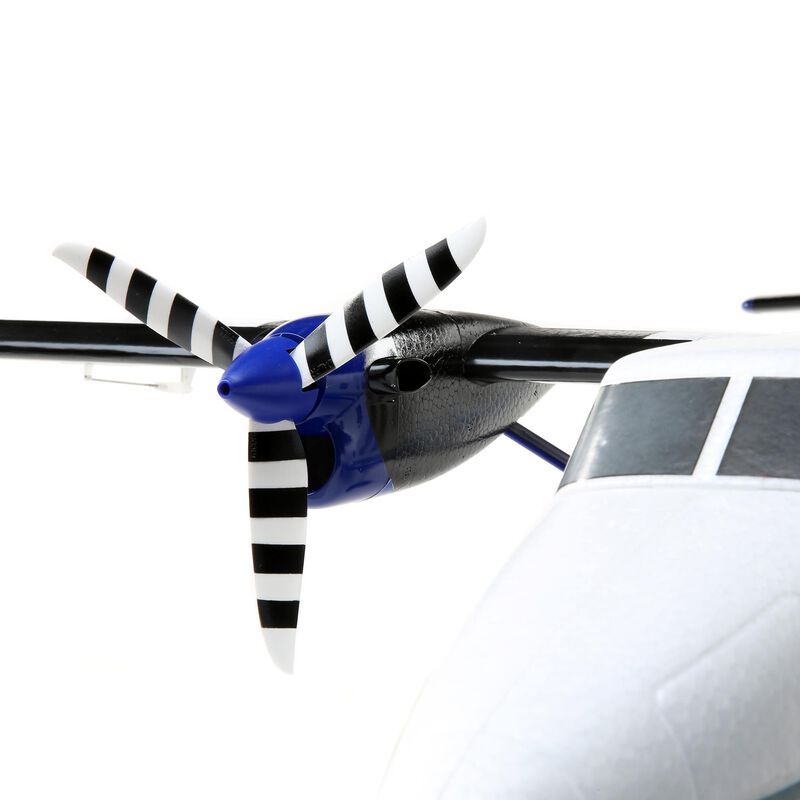 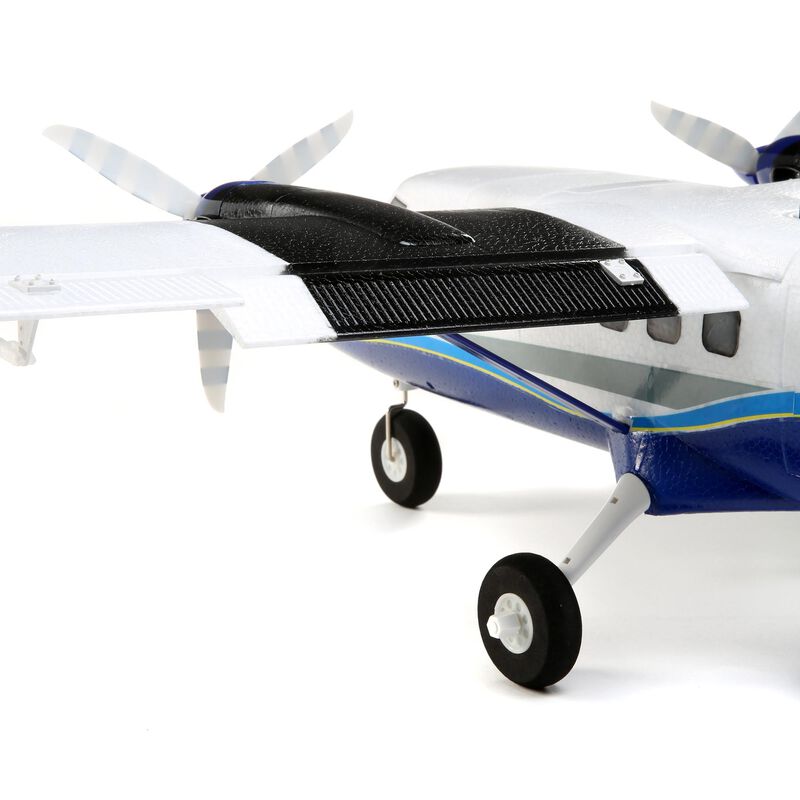 Share
The link to Twin Otter 1.2m PNP, includes Floats has been copied
|

The DHC-6 Twin Otter was developed by de Havilland Canada in 1965. Designed as a rugged STOL (Short Take-Off and Landing) commuter aircraft, the Twin Otter carried passengers and cargo into harsh environments such as the sub-zero Antarctic and scorching North African desert. The line was shut down in 1988, after producing 844 aircraft. Viking Air Limited purchased the Type Certificates for all out-of-production de Havilland aircraft in 2005 and announced the Viking Series 400 Twin Otter Production Program two years later. By mid-2015 Viking delivered 75 new aircraft and re-established the Twin Otter as a successful commuter airliner — while nearly 500 of the original aircraft also remained in operation. The E-flite® Twin Otter 1.2m is a scale replica that makes the perfect first twin-powered model for intermediate to experienced RC pilots. It's versatile, easy to fly, and is outfitted with functional features that include LED navigation and landing lights, flaps, and optional-use floats.

For RC pilots who want a great first (or next) twin model, there's no better choice than the E-flite® Twin Otter 1.2m. It delivers exciting "bush plane" scale looks and performance along with the inherent stability of a high-wing design. The convenient size of the Twin Otter means you can transport it fully assembled for flying at a wide variety of locations with paved, grass or packed dirt surfaces, such as large parks, sports fields and RC flying fields. Your adventures won't stop there, though — remove the tricycle landing gear, install the provided floats, and now you're ready to fly off of large ponds and small lakes. Having two landing gear options included in the box only hints at this model's incredible value. Along with molded-in panel lines, corrugated control surfaces and a scale-inspired trim scheme, the E-flite Twin Otter comes with many functional features including operational flaps, LED navigation and landing lights, and props finished with black and white stripes that look awesome whether spinning or standing still. The Twin Otter 1.2m offers a truly unique flying experience that a wide range of pilots can enjoy. 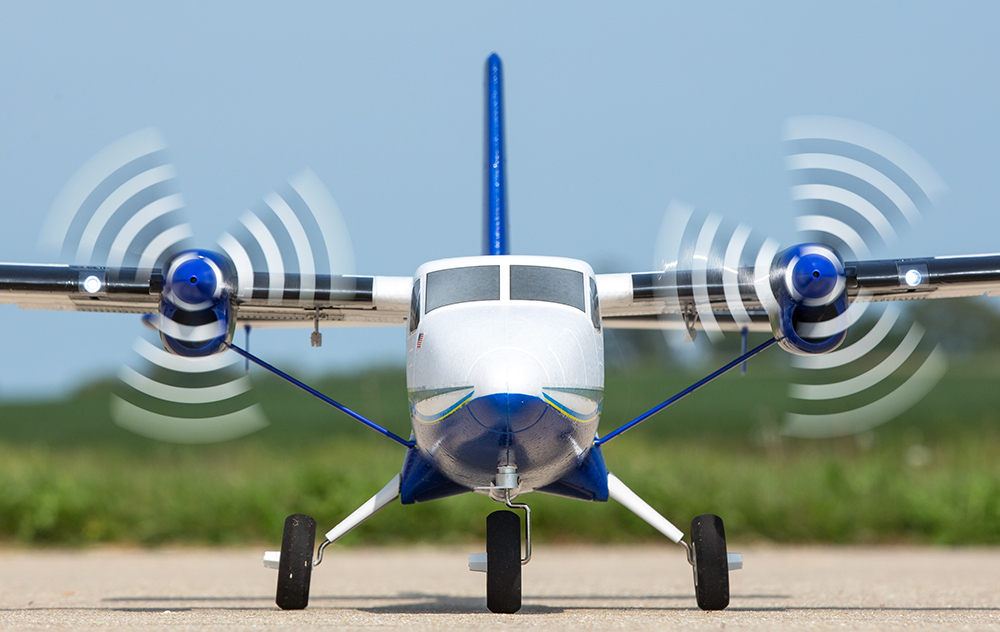 The factory-installed power systems feature high-power brushless outrunner motors equipped with three-blade counter-rotating propellers. The ESCs are wired so they can be powered with a single 3S 2200-3200mAh battery to deliver better-than-scale power and long flight times of up to 10+ minutes. 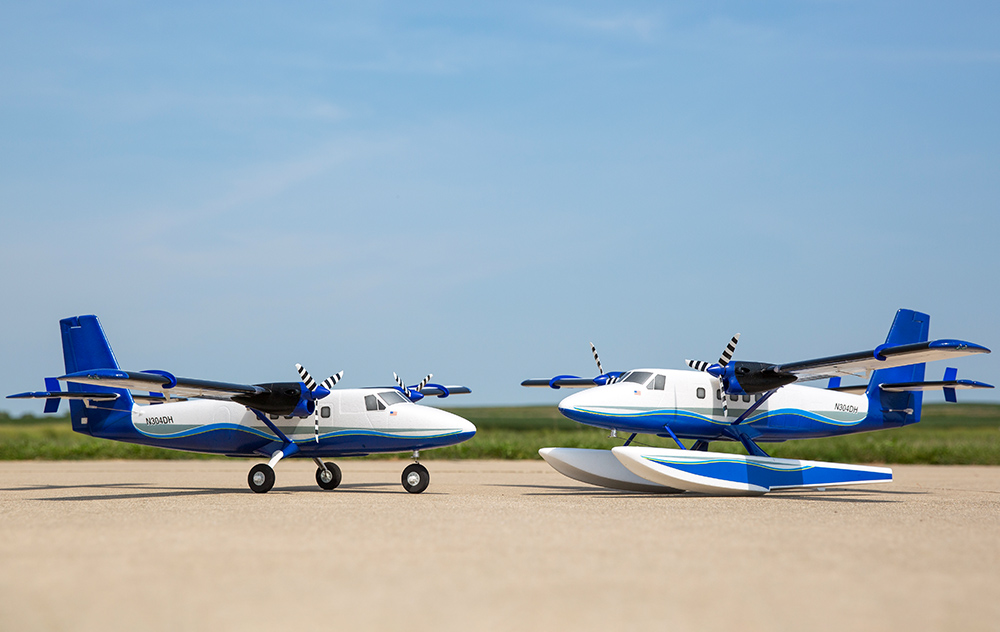 Equipped with tricycle landing gear that includes a steerable nose wheel, the Twin Otter offers excellent ground handling and can be flown from paved, grass or dirt surfaces. You can also fly from water using the included float set — it matches the trim scheme and features a water rudder for superb steering control. Both gear options are easy to install and can be swapped out in minutes. 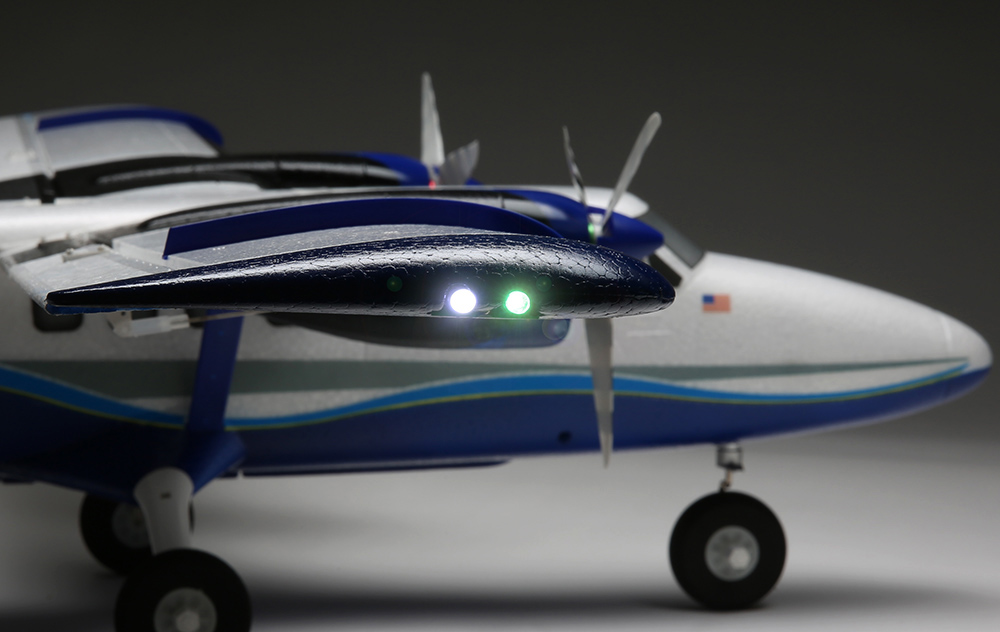 The realistic-looking LED landing and navigation lights are factory-installed and powered from the flight battery. Operational flaps offer improved slow-flight capability and performance while also making it possible to take off and land in shorter distances and at slower speeds. 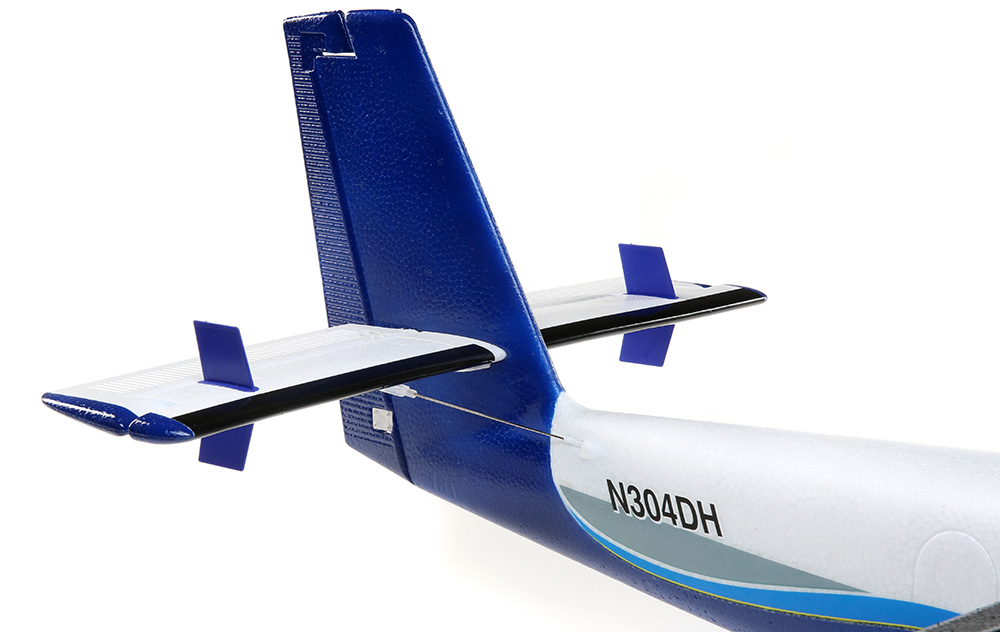 Construction with molded EPO material makes it possible to replicate complex details and shapes in a lightweight yet durable form. The result is an outstanding scale appearance that's easy to maintain and delivers the best flight experience possible. 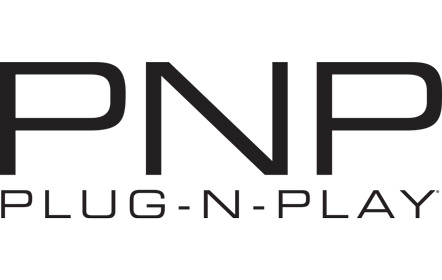 Powered by
4.8 star rating 4 Reviews
0 Questions \ 0 Answers
ask a question
write a review
(3) (1) (0) (0) (0)
Show all reviews
ask a question
write a review
Thank you for posting a review!
We value your input. Share your review so everyone else can enjoy it too.
share
share
share
Thank you for posting a review!
Your review was sent successfully and is now waiting for our staff to publish it.
Thank you for posting a question!
Please click on the link in the confirmation email we just sent you to submit your question.
Your question will appear on the site once someone answers it.
write a review
ask a question
Updating Results
Verified Reviewer
0.0 star rating
01/27/21
Review by Anonymous User
On
share ' Share Review by Anonymous User facebook facebook Share Review by Anonymous User twitter twitter Share Review by Anonymous User LinkedIn linkedin Share Review by Anonymous User
01/27/21
Was this review helpful? 0 0
B
Bryan
Verified Reviewer
5.0 star rating
07/26/20
Best twin I have ever flown!
Review by Bryan on 26 Jul 2020 review stating Best twin I have ever flown!
I have owned a few twin engine RC planes over the years and always enjoyed flying them. I helped a club member assemble and maiden his E-Flite Twin Otter and I was really impressed with the plane. It was far more enjoyable to fly than I ever imagined! I flew his a few times from the grass and again off the water on floats. I instantly fell in love with the plane and had to get one for myself. The counter-rotating props make taking off from the grass or water very easy as the plane tracks very straight. In the air, the plane has a wide flight envelope offering scale and aerobatic pilots something that fits their flying style. The fact it flies on 2200 3S batteries is another plus since so many of us have a mountain of those in our flight bags. Every time I fly the Twin Otter, I am more and more impressed with it! In fact, my other twins haven't been out nearly as much this year as I have been having too much fun with the Twin Otter! The only upgrades to mine and my friend's Twin Otter is a metal gear servo out of the E-Flite Viper EDF and a servo-saver on the nose-gear strut. Our field has some rough spots in it and the upgrades to the rudder/nose gear servo help handle the rough spots better. Overall, the plane is a solid 5-stars! The Twin Otter is easily the best twin and surely the best float-plane I have ever flown! I just love the plane and so does my friend that bought one before I got mine. We both are 100% happy with the plane!
On Twin Otter 1.2m PNP, includes Floats
share ' Share Review by Bryan on 26 Jul 2020 facebook facebook Share Review by Bryan on 26 Jul 2020 twitter twitter Share Review by Bryan on 26 Jul 2020 LinkedIn linkedin Share Review by Bryan on 26 Jul 2020
07/26/20
Was this review helpful? 5 0