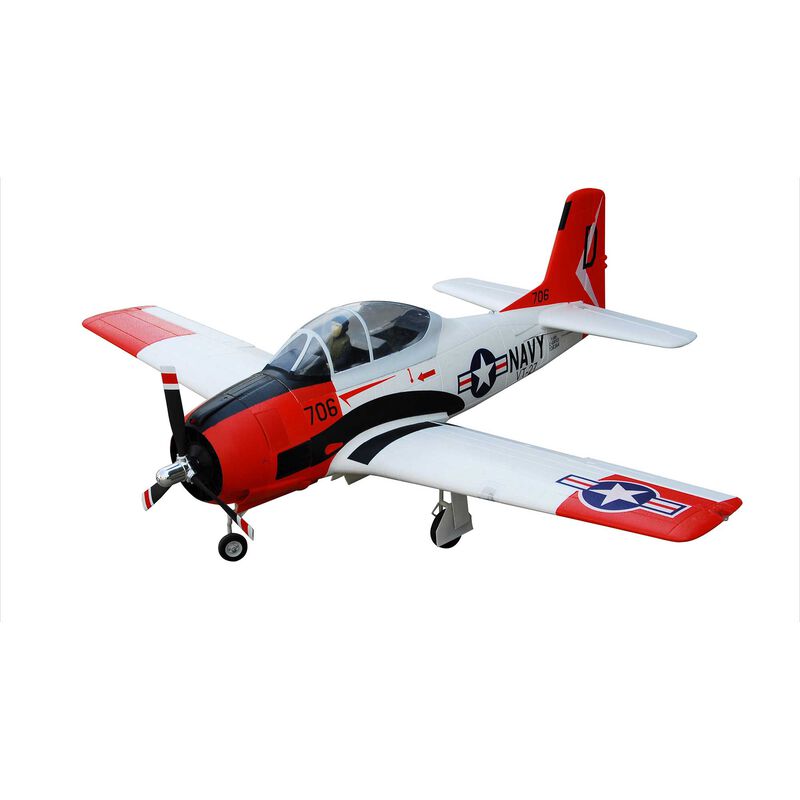 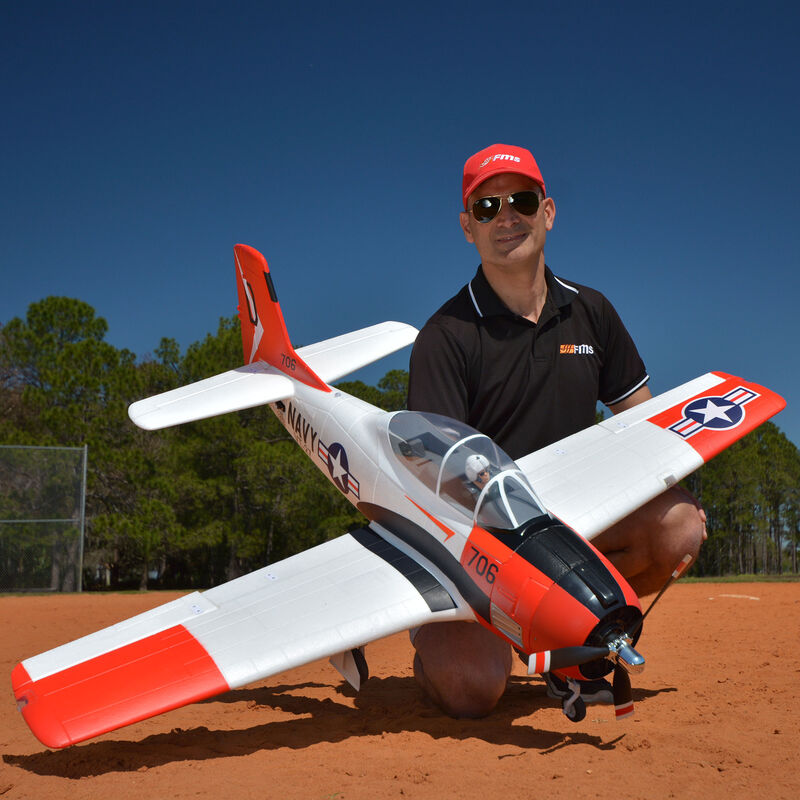 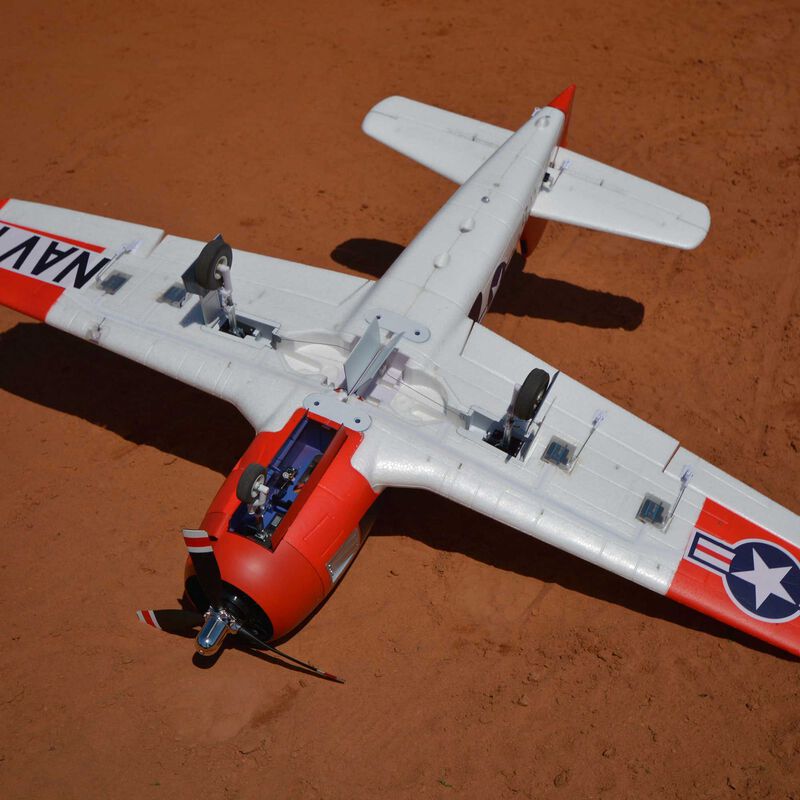 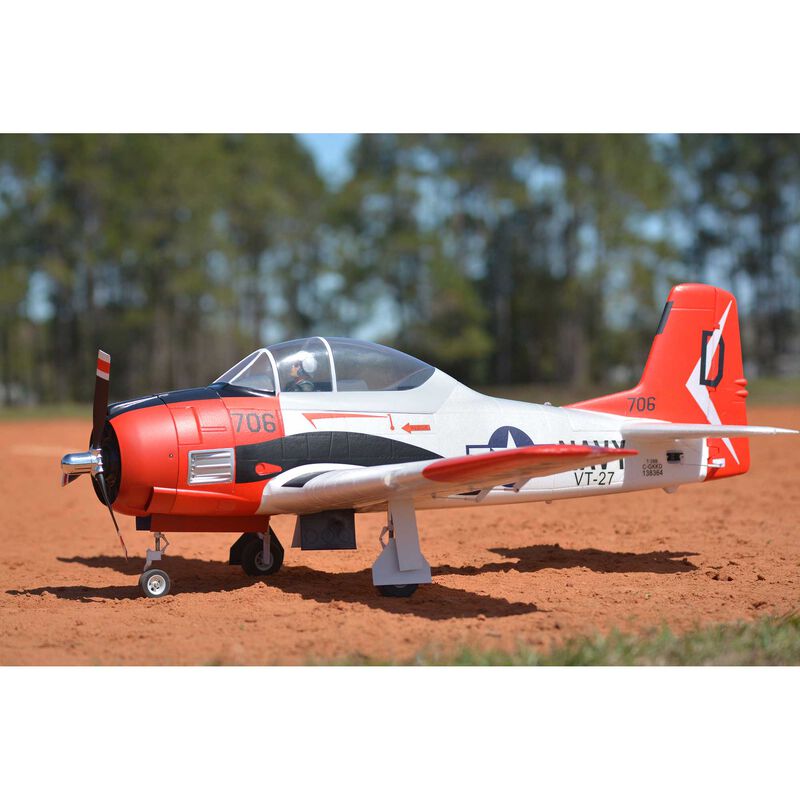 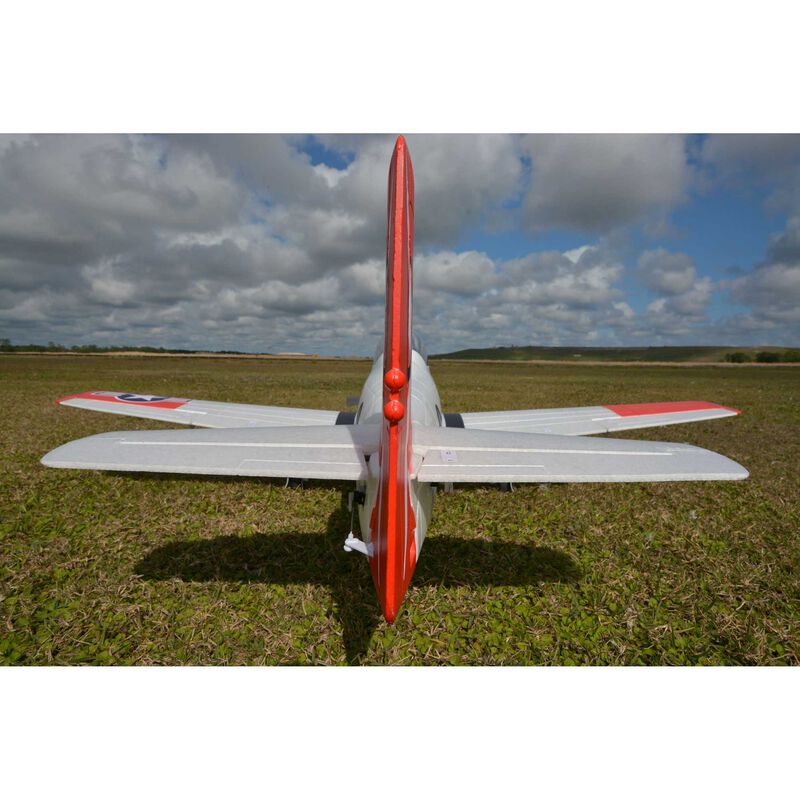 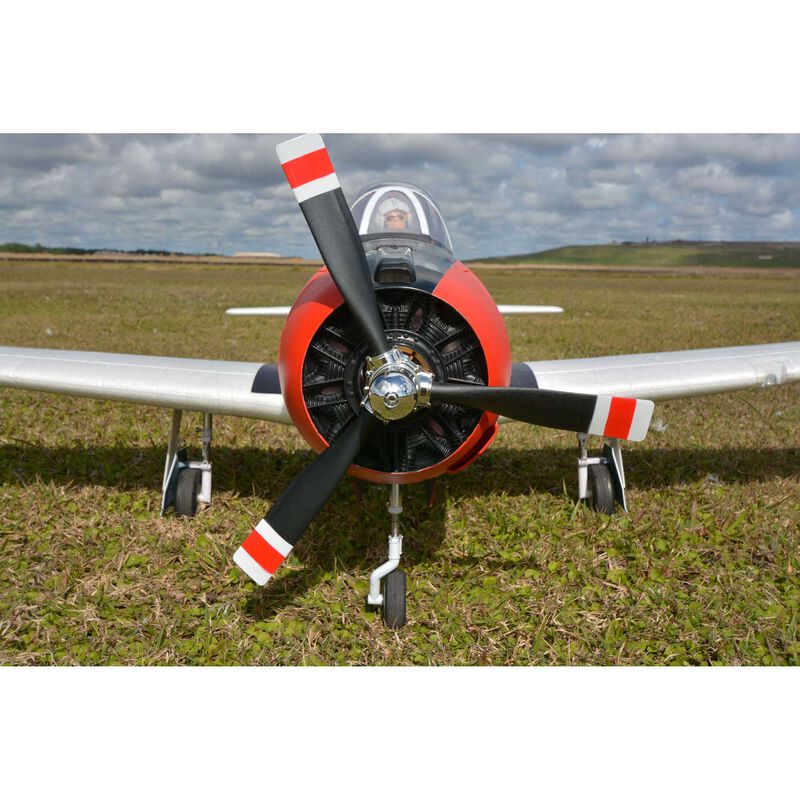 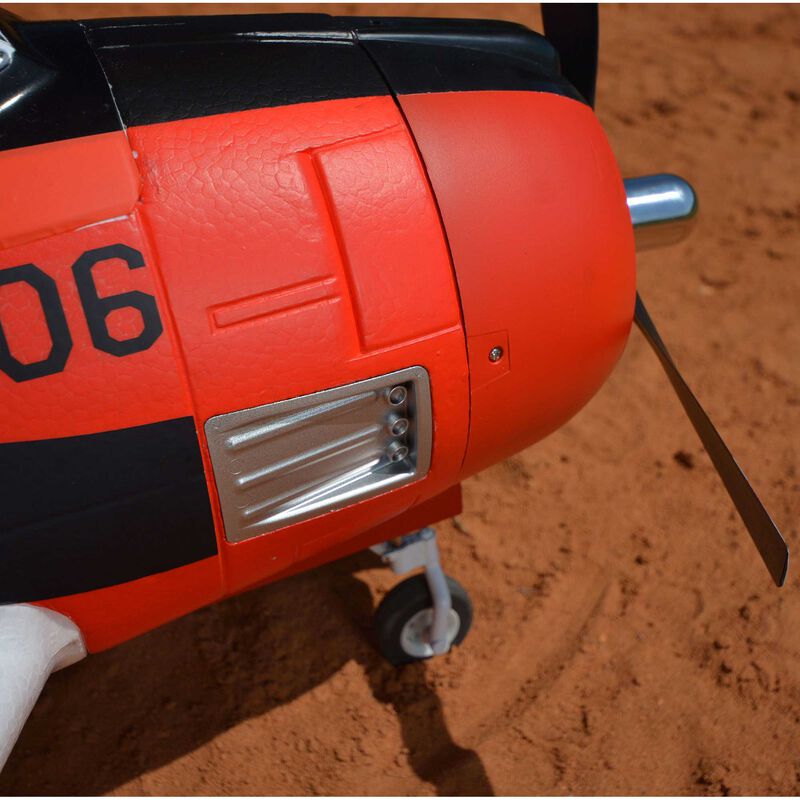 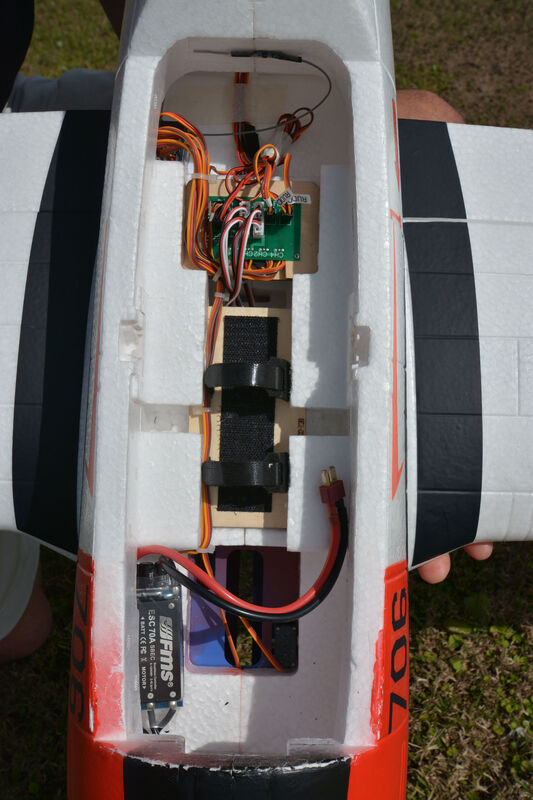 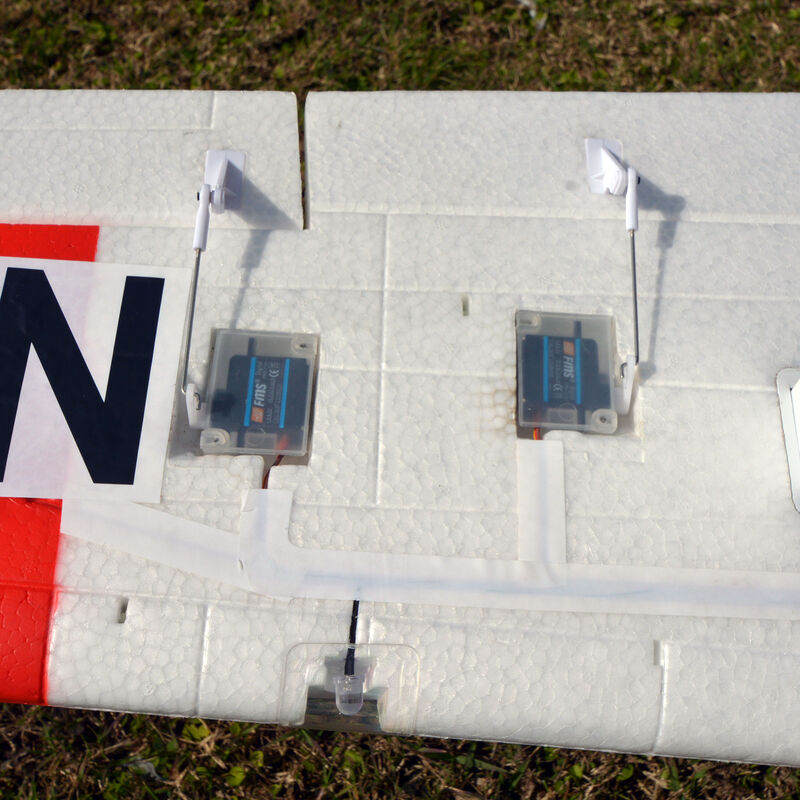 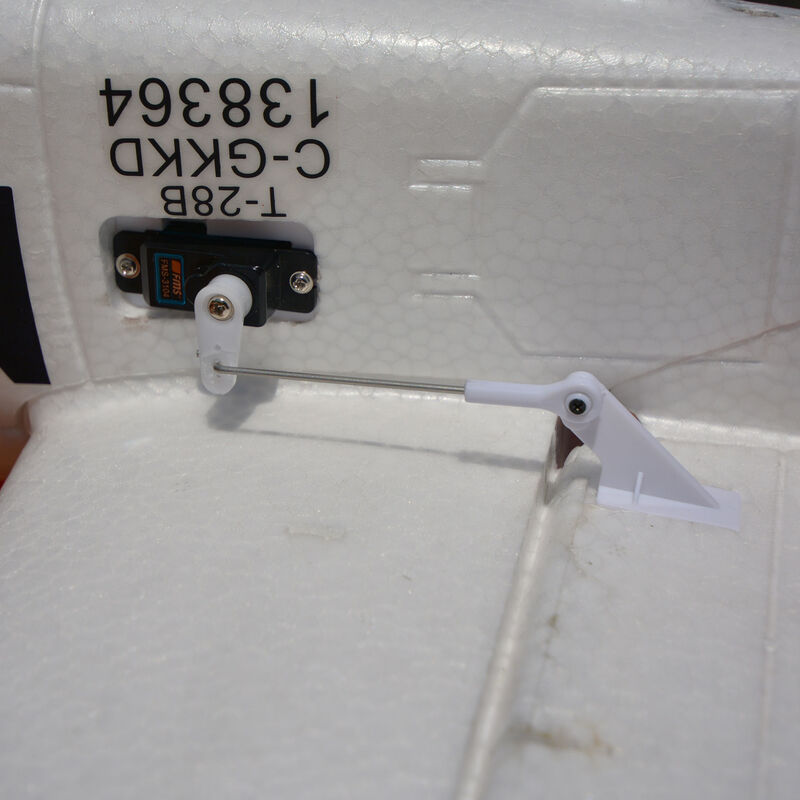 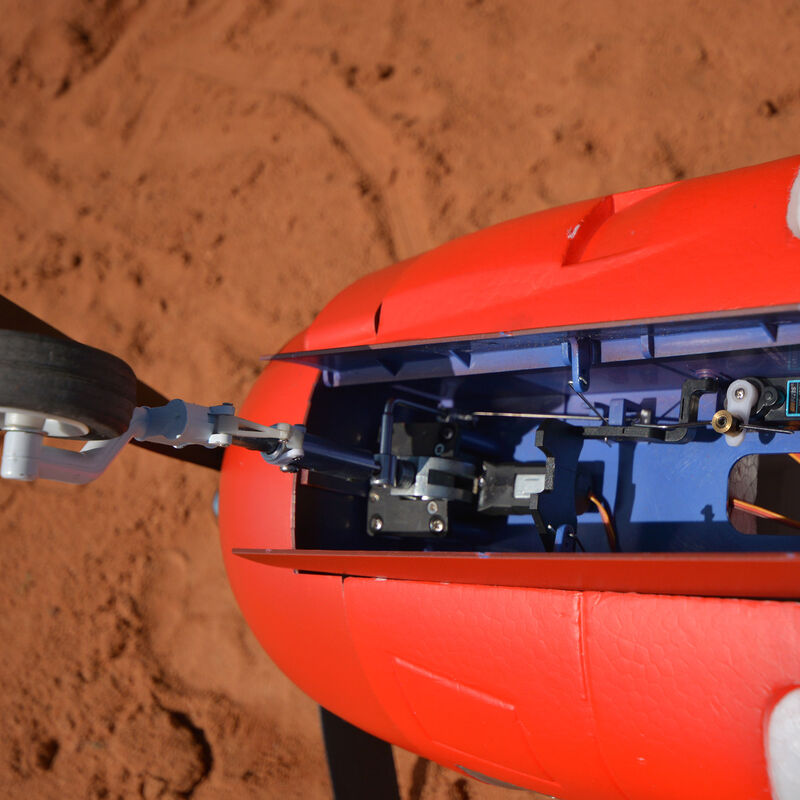 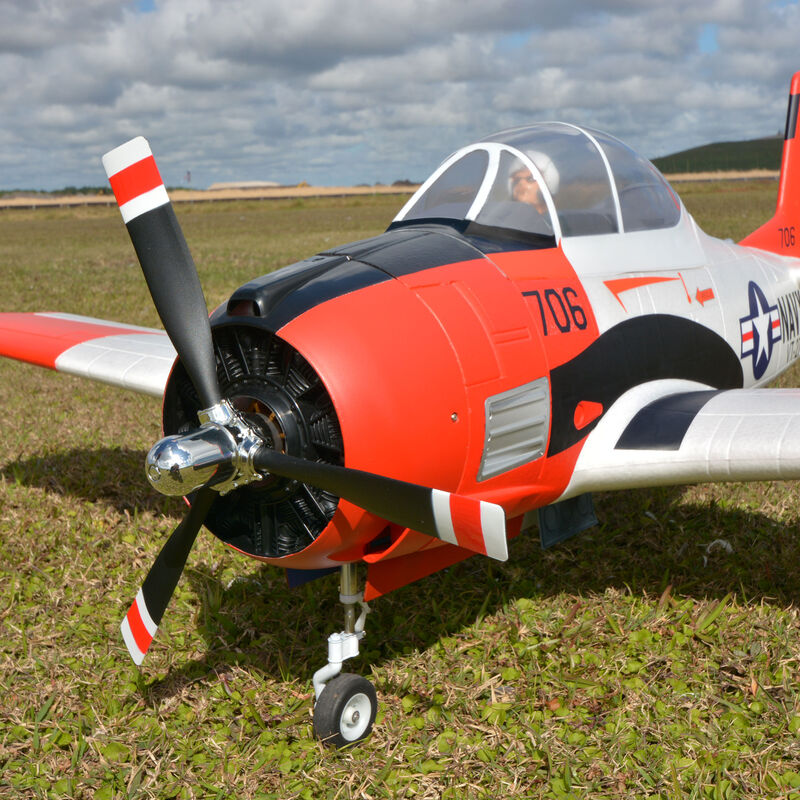 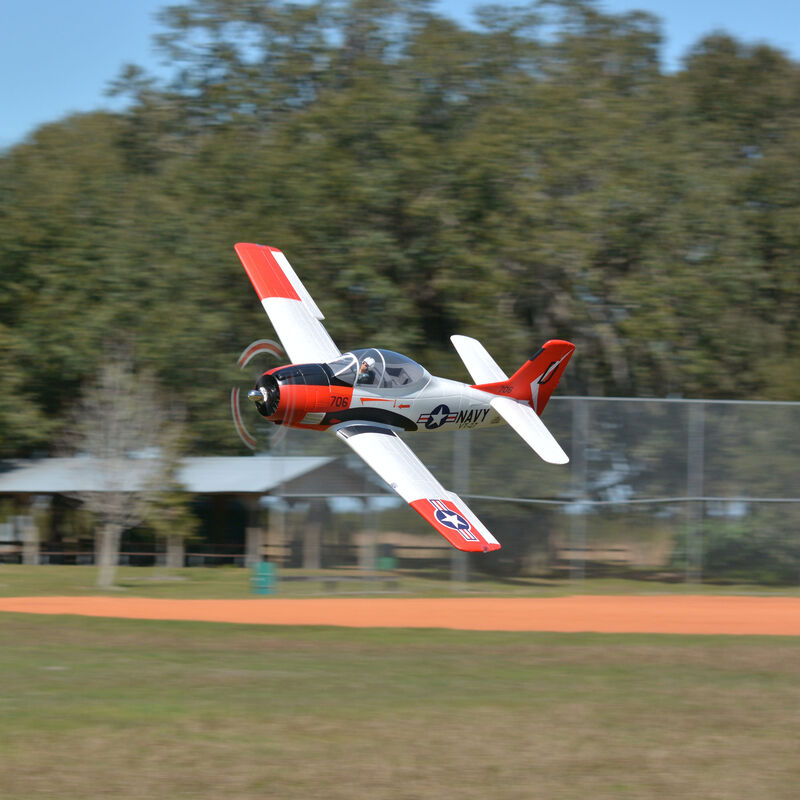 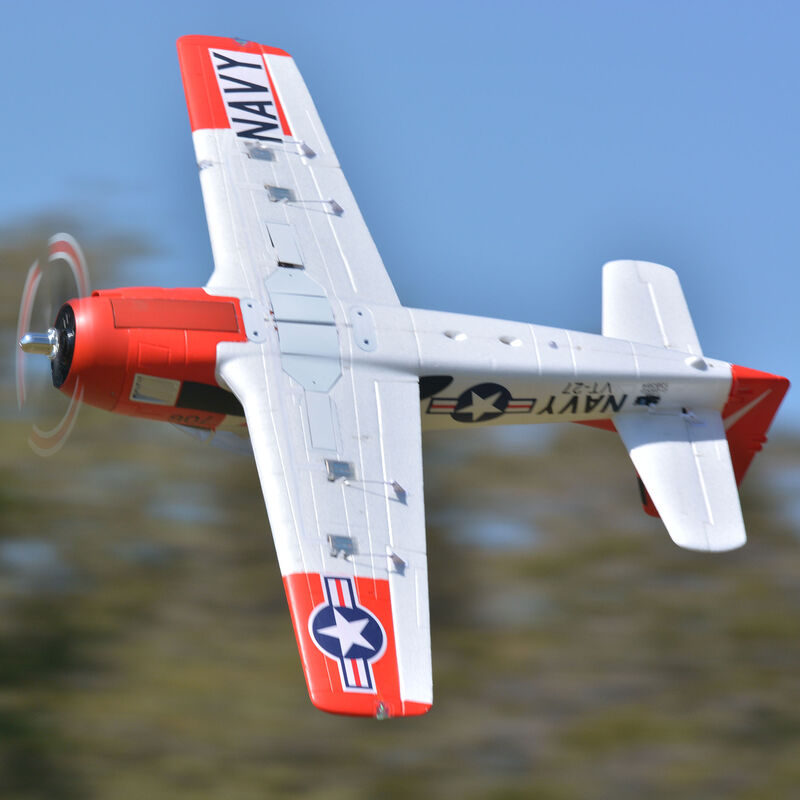 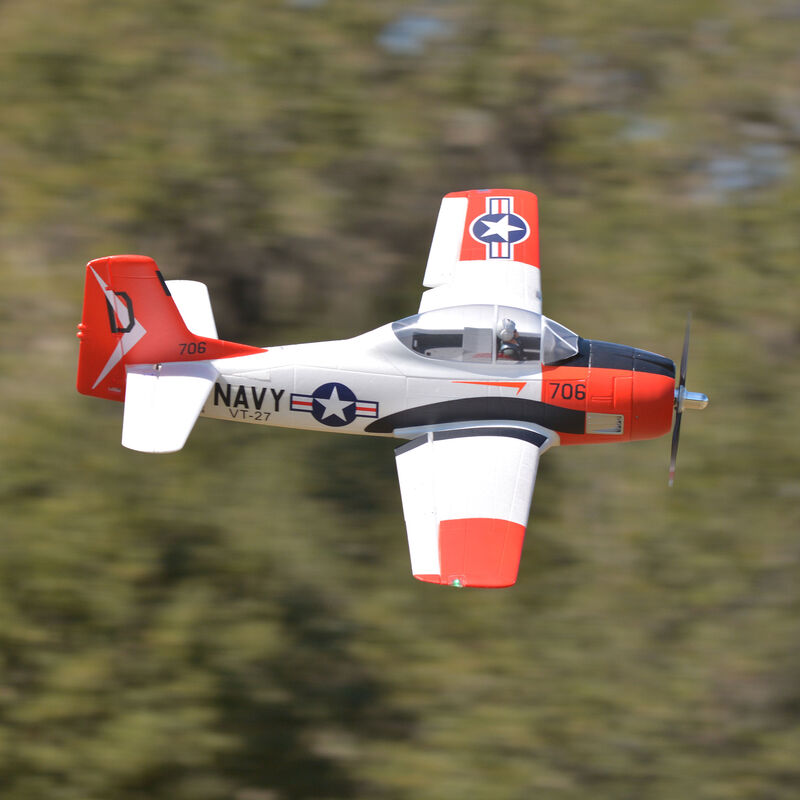 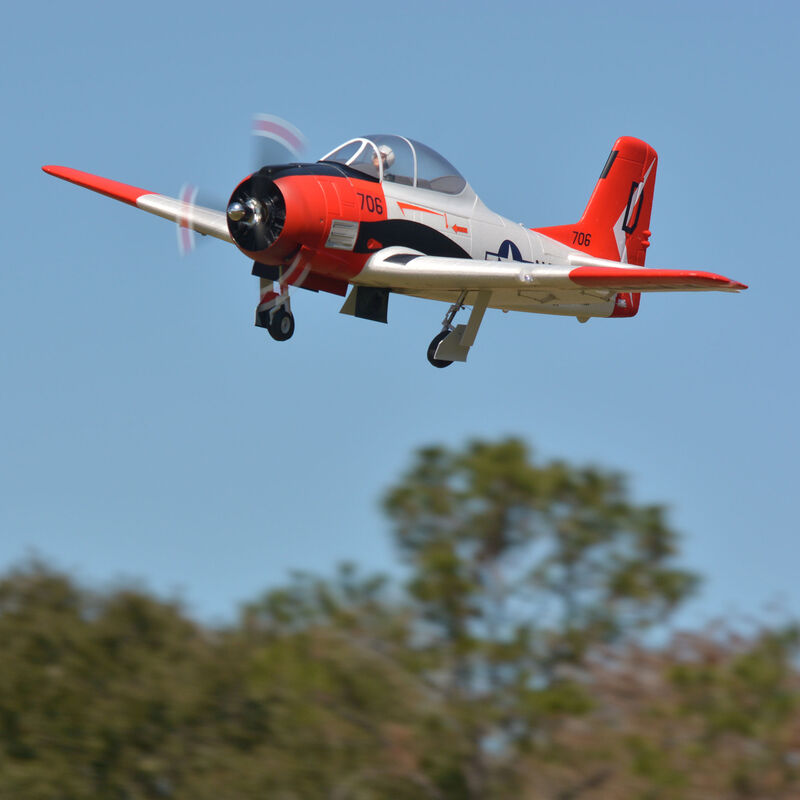 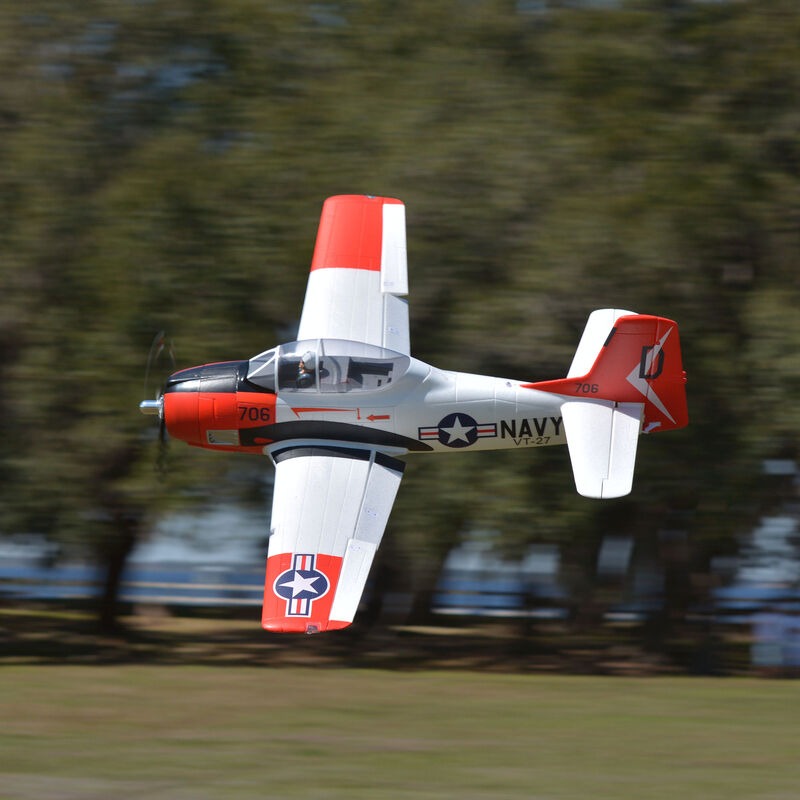 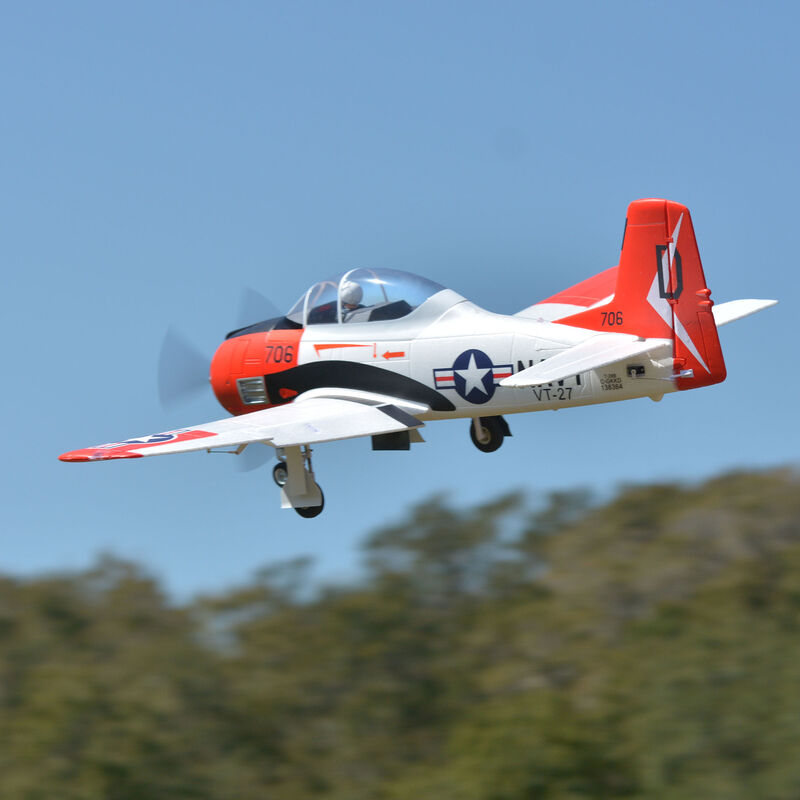 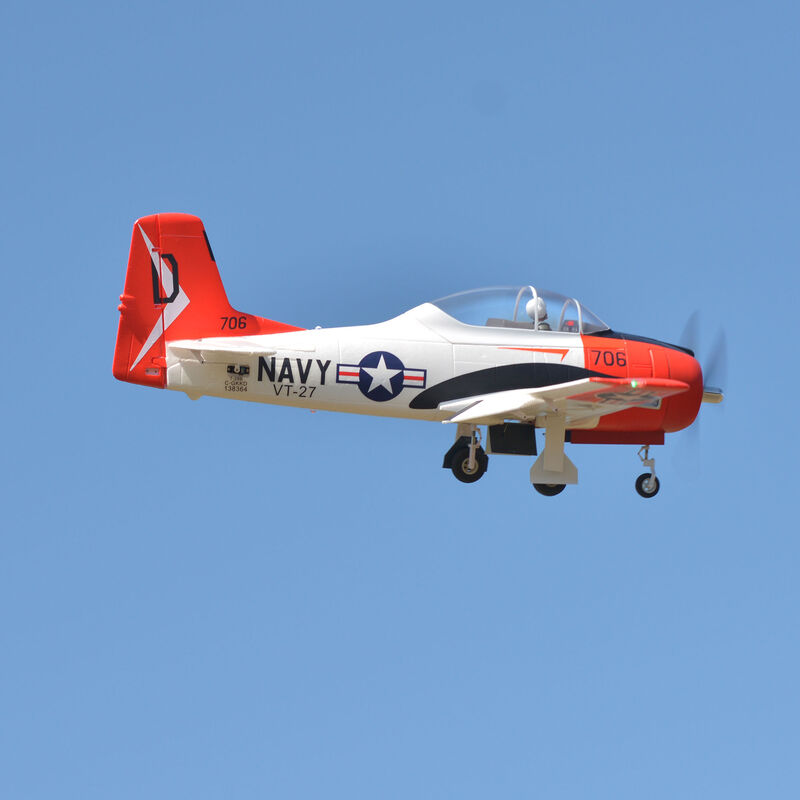 No matter whether you had an FMS T28 before, the new V4 is full of surprises. First of all, the foam ratio has been upgraded from EPO 40 to the lighter and larger EPO 52, which alleviates the airplanes weight, without weakening the airplane. Moreover, the original oil paint which has an unavoidable negative side effect of corrosion has been replaced by the latest environmental water-based paint.

The latest FMS multi-connector is used in the V4, which makes the assembly easy and simple while leaving the wires orderly and user- friendly. The 1400mm T28 V4 adopts the new design of ball linkage to remove the play for a more accurate flight. The updated 4258 kv650 motor increases the power and speed around 30% higher than the previous V3 version, plus the new power system can work with 4S, 5S, and 6S batteries to satisfy different customer requirements. Both front and rear landing gears are now metal, with a shock absorption function for hard landings.

In terms of construction and performance the 1400mm T28 V4 is totally different to the old versions. It is certain that the V4 greatly enhances flight appeal.

Don't miss out on this thrilling experience!

The airplane itself is beautiful and goes together easily once you can get the few screws lined up with the resepticles.The landing gear is oleo supported to absorb less than perfect landings. I cant wait to fly this beauty.
On T-28D Trojan V4 Red PNP, 1400mm
share ' Share Review by Barryflyboy on 8 Sep 2017 facebook facebook Share Review by Barryflyboy on 8 Sep 2017 twitter twitter Share Review by Barryflyboy on 8 Sep 2017 LinkedIn linkedin Share Review by Barryflyboy on 8 Sep 2017
09/08/17
Was this review helpful? 0 1
S
Spark79 4.0 star rating
07/21/19
Trojan Revisited
Review by Spark79 on 21 Jul 2019 review stating Trojan Revisited
This is a follow-on to an earlier review of this airplane. It is a very nice airplane to fly. It reminds me of the pattern airplanes I used to fly years ago, fast and maneuverable. The major problem I've had is the nose gear that collapsed with any pressure to the rear. The tech at FMS said I was supposed to land on the mains first, then lower the nose to the ground. Sure. After replacing the entire nose gear assembly (I bought a new one with servo) I've not had the collapse problem. Maybe getting a gear/servo that stands up to the rigors of landing is a luck-of-the-draw proposition. I did two other things that seem to help; I use only a 3600 MaH, 4-cell battery almost all the way back to the rear of the battery tray, and I put a couple of nylon washers, each about 1/8 inch, under the rear mounting to tilt the nose gear strut a little bit forward. I noticed the real one does that. So far the combination has resulted in a series of successful landings. Apparently the T-28 tends to be nose-heavy and the elevator at slow speed has trouble lifting the nose on landing, putting rear pressure on the nose wheel strut and servo. Moving the CG back gives more elevator authority. Tilting the nose gear strut a little forward tends to translate landing pressure to the shock-absorber spring and not generate as much rearward stress. The airplane settles in nicely with flaps using throttle to control descent. You can trim some plastic off the main gear doors to head off the possibility of binding. One video says to glue the plastic collars that are at the end of the strut, above the &quot;fork.&quot; One of the bigger, lower gear doors can twist on its mount, not a very rigid or robust mounting. I just bend it back after each flight. The airplane looks great and I get compliments on it at the field. The weak landing gear prevent a higher rating than a 4. The rest of the airplane almost makes me forget the investment in landing gear parts. When it is all working the airplane will definitely peg your fun meter. 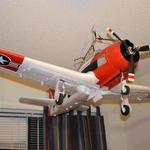 Flying with a 5000mAh 4S battery and yes, the plane is nose heavy, battery is as far aft as it will go, control board in the way. Put 1oz. of lead in the tail to balance.