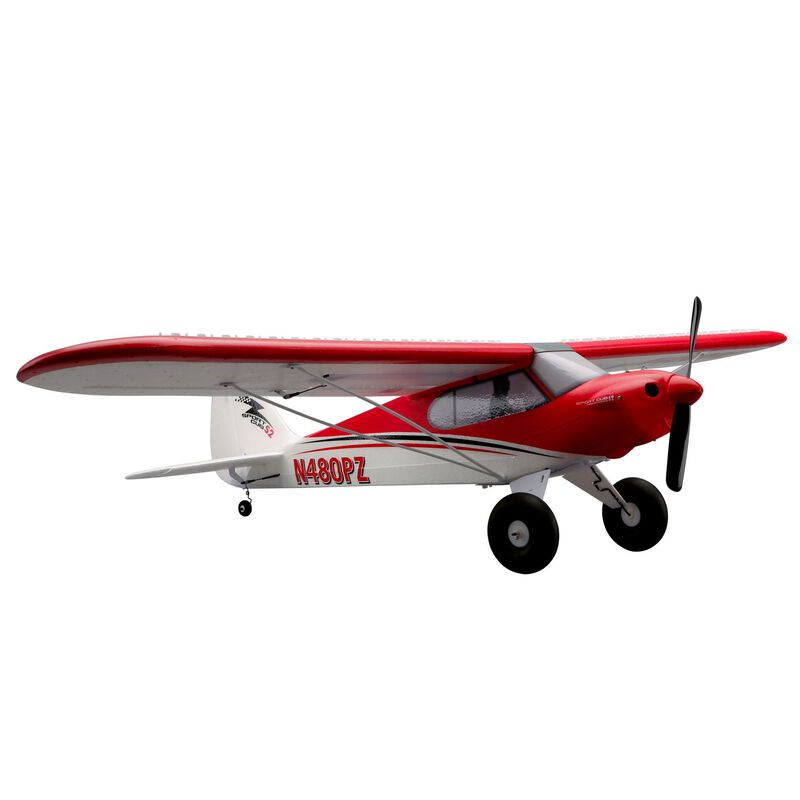 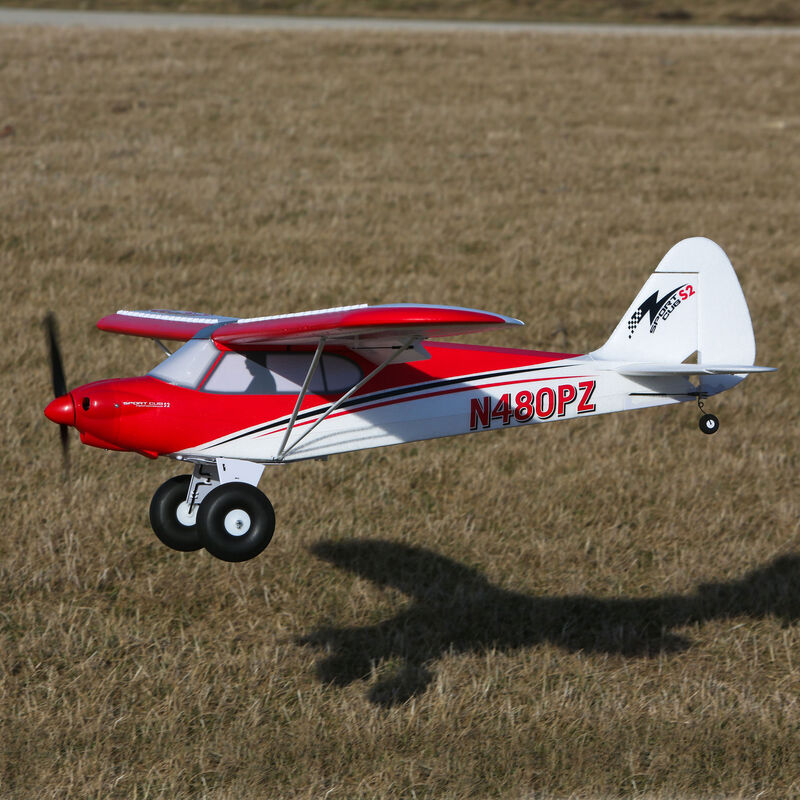 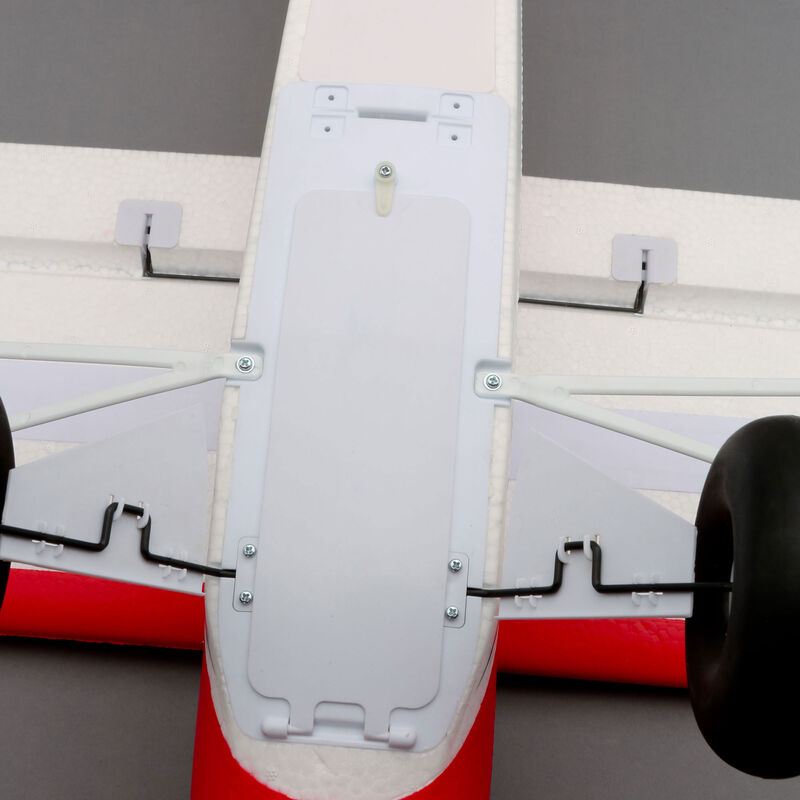 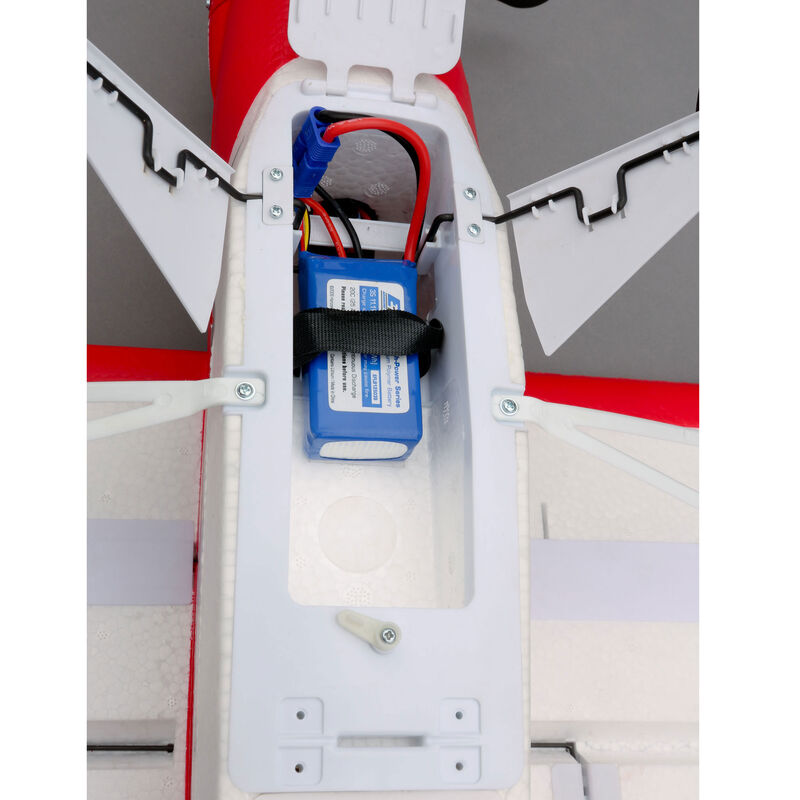 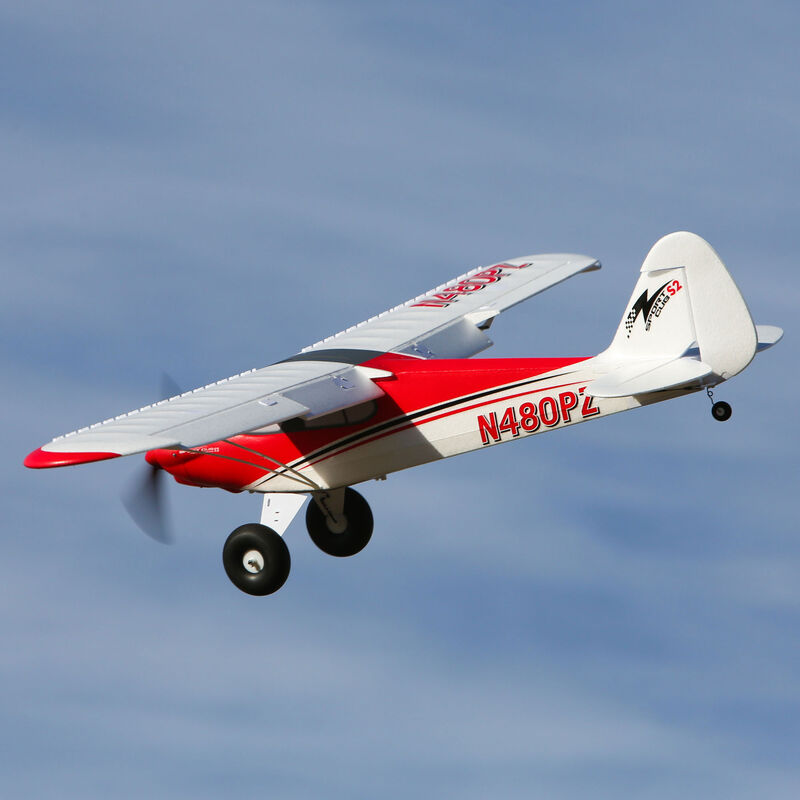 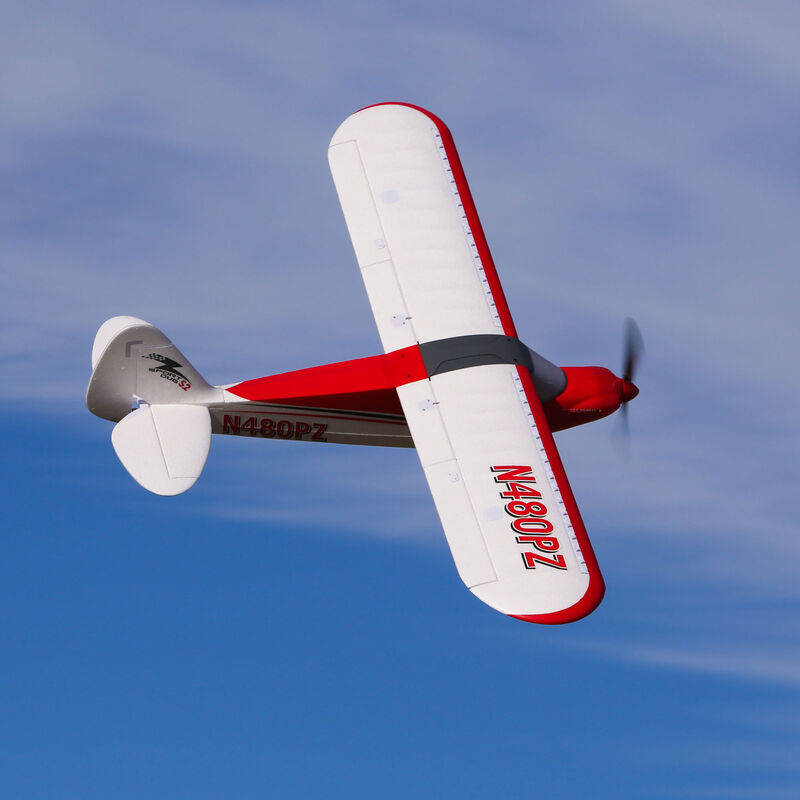 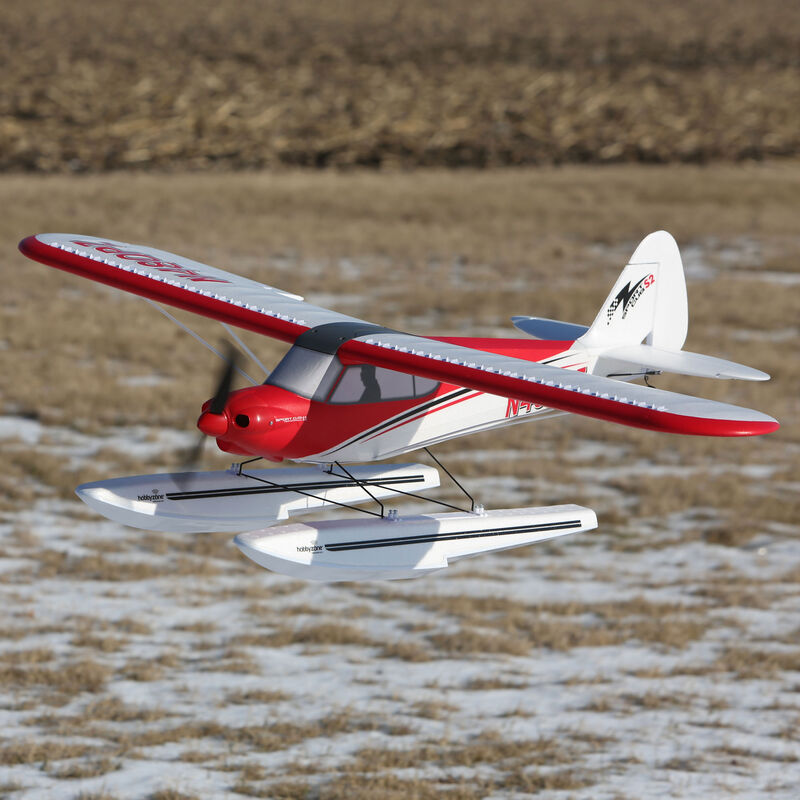 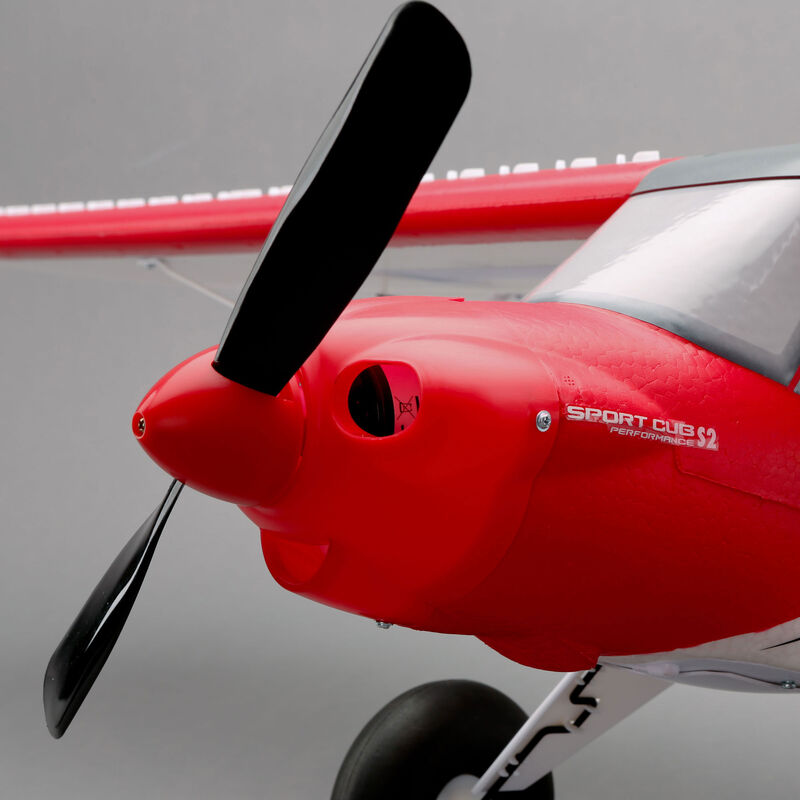 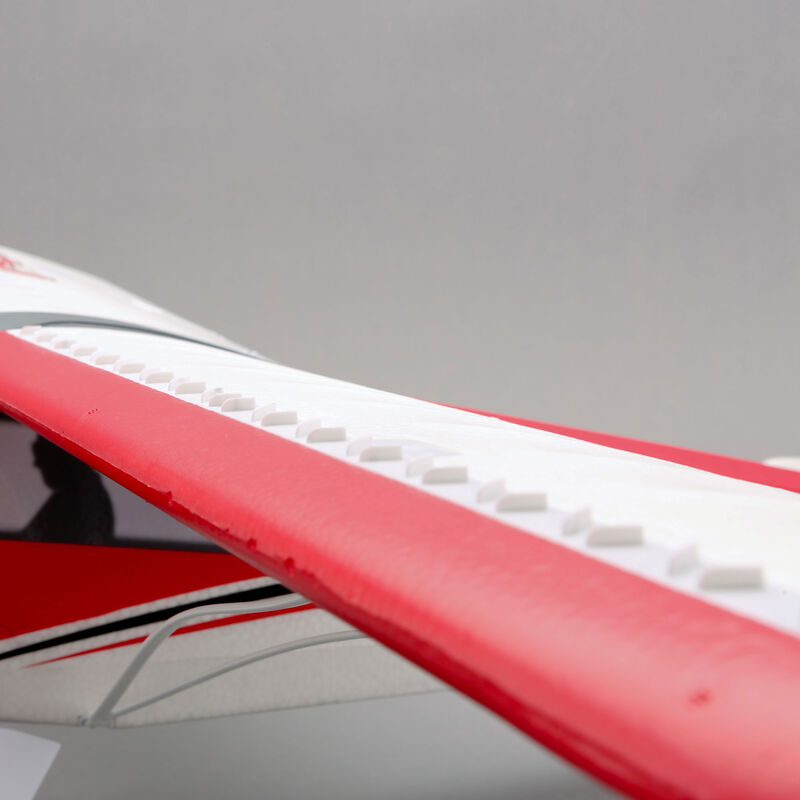 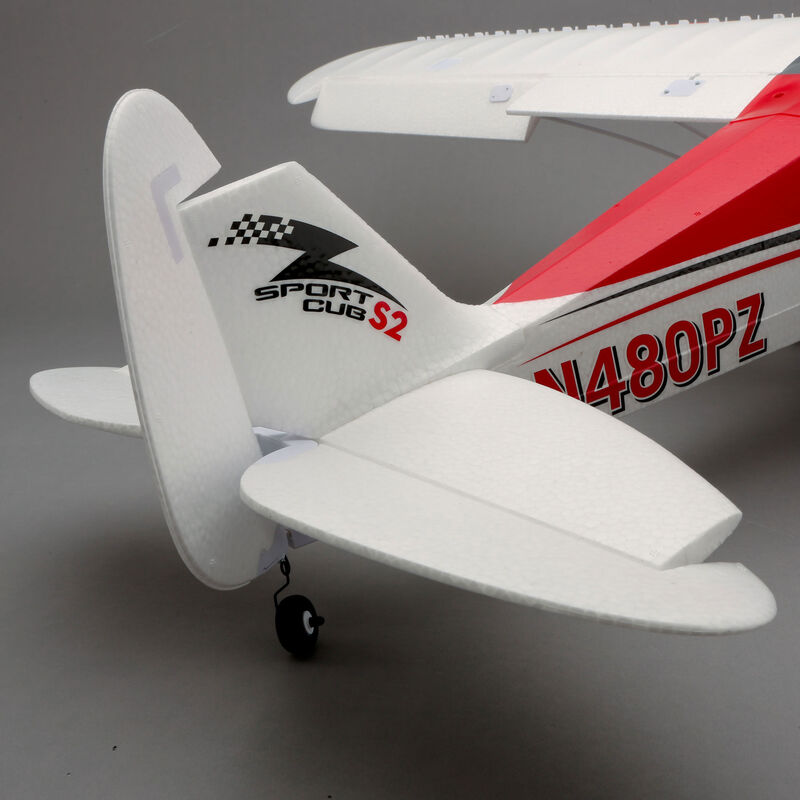 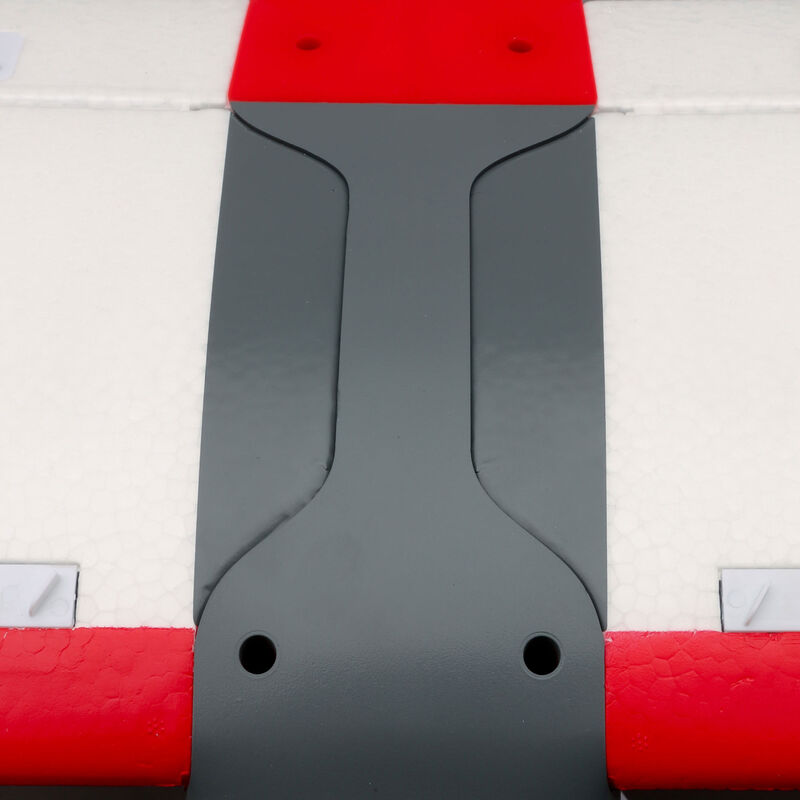 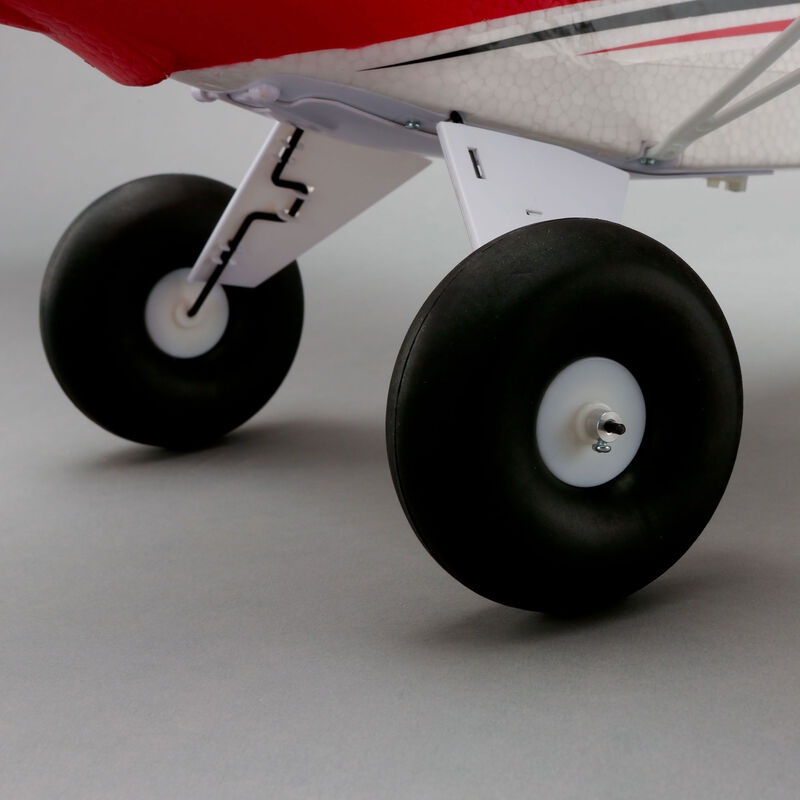 Item No. PKZ6875
This Item is No Longer Available

The full-scale Cub Crafters Sport Cub is an inspired reinvention of the Piper Super Cub that is introducing a whole new generation of aviators to the wonder and excitement of back country flying.

The ParkZone® Sport Cub park flyer is a fantastic recreation of this aerial adventure machine that will open a new world of possibilities for RC pilots too. Constructed of durable, lightweight Z-Foam™ material, it shares many of the same aerodynamic features that give the full-scale version its light wing loading and superb short field abilities. Oversized tundra tires for flying off grass and other rough surfaces are included. Those in search of the ultimate RC bush flying experience have the option of adding floats and functional flaps.

This Plug-N-Play® version can be flight-ready in the time it takes to install a receiver and charge a battery.

Powered by
4.6 star rating 35 Reviews
0 Questions \ 0 Answers
ask a question
write a review
(27) (4) (3) (0) (1)
Show all reviews
ask a question
write a review
Thank you for posting a review!
We value your input. Share your review so everyone else can enjoy it too.
share
share
share
Thank you for posting a review!
Your review was sent successfully and is now waiting for our staff to publish it.
Thank you for posting a question!
Please click on the link in the confirmation email we just sent you to submit your question.
Your question will appear on the site once someone answers it.
write a review
ask a question
Updating Results
Verified Reviewer
0.0 star rating
10/26/20
Review by Anonymous User
On
share ' Share Review by Anonymous User facebook facebook Share Review by Anonymous User twitter twitter Share Review by Anonymous User LinkedIn linkedin Share Review by Anonymous User
10/26/20
Was this review helpful? 0 0
C
Countryboy 5.0 star rating
05/26/15
Short field take offs
Review by Countryboy on 26 May 2015 review stating Short field take offs
This is a great plane for short field take off from the grass. Set flaps as recommend with 12 and 22 degrees. Take off in about 15 ft with full flaps and will climb right up. Flaps set with elevator so as flaps go down elevator goes down also eliminating unexpected loops. Love the way it fly's, rolls, loops, hammerhead stalls look so real, inverted flight is a breeze. One of my favorite planes. 1300 or 2200 Li Po battery is plenty. Landings are so smooth with full flaps and short fields like i have at home. AX3S is the way to go if you have to fly in windy conditions. Technology is amazing now for RC planes. Yes i would recommend this plane for someone who doesn't want giant scale and wants a plane that fly's great and also looks good. Haven't tried the floats yet but have seen it fly with them and same thing great plane. I have flown it in the winter on skies and look like a real plane. Fits in my car very easily. 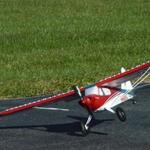 On Sport Cub 1.3m PNP
share ' Share Review by Worriedman1 on 12 Dec 2014 facebook facebook Share Review by Worriedman1 on 12 Dec 2014 twitter twitter Share Review by Worriedman1 on 12 Dec 2014 LinkedIn linkedin Share Review by Worriedman1 on 12 Dec 2014
12/12/14
Was this review helpful? 0 0
Slideshow
Slide controls
Loading...
Powered by
M
Mailcat8 5.0 star rating
11/11/17
Wing hold-down bolts=metric, 3mm dia., 10mm
Review by Mailcat8 on 11 Nov 2017 review stating Wing hold-down bolts=metric, 3mm dia., 10mm
FWIW: In case anyone looses the little wing hold-down bolts like I did, they are available at Lowe's specified as above in the title-- = metric, 3mm dia, 10mm long. The bolts supplied are 10mm long, so anything 10mm and longer will work--they won't bottom out. Love this airplane.
On Sport Cub 1.3m PNP
share ' Share Review by Mailcat8 on 11 Nov 2017 facebook facebook Share Review by Mailcat8 on 11 Nov 2017 twitter twitter Share Review by Mailcat8 on 11 Nov 2017 LinkedIn linkedin Share Review by Mailcat8 on 11 Nov 2017
11/11/17
Was this review helpful? 0 0
S
Sbfrc 5.0 star rating
08/13/17
A Real Sweetheart
Review by Sbfrc on 13 Aug 2017 review stating A Real Sweetheart
This is one of the 2 or 3 best flying airplanes I have owned in 11 years of RC flying. Assembly is easy and straightforward. I am very careful that before I fly a new airplane to be sure that all control surfaces are precisely aligned and that the aircraft (with 2200 mAh battery inside) is properly balanced just a hair forward of the true center of gravity under the wing and laterally (not heavier on either side). The result of that was that the first time I flew this airplane it performed flawlessly. Of course this is not a 3D aerobatic plane but the big surprise came when I put it through some basic maneuvers. It not only does quick and clean aileron rolls and loops, but it will snap roll, do split S's, chandelles, barrel rolls, Cuban 8's, wingovers and tail slides -- all that from a Cub derivative. I was frankly amazed. Yet for a flyer just a short step beyond their first trainer, it will deliver smooth, comfortable laps around the field. And it's easy to land. Just line it up, cut the throttle, let it glide in and give it the barest touch of up elevator as the wheels touch down. Taxiing is greatly assisted by the plane's big main wheels and steering tail wheel. Just be sure to give it full up elevator to firmly plan the tail wheel. As some have noted, the landing gear will bend during a hard landing. Just bend it back to the correct alignment. Landing gear that bends under heavy impact is always better than overly rigid gear that rip out of the plane, taking chunks of fuselage with it during a smackdown landing. The airplane comes with working flaps, but they are actually not needed at all for easy landings. In fact, the plane will become quite difficult to control with full flaps down, so start with the pushrods set to give just 10 or 15 degrees of flaps, if you really want to use them There a a couple of minor weak points in the aircraft design. The underside of the tail boom is thin and will readily crack if you try to carry the plane with fingers against that place. When you flip the airplane over on the bench to insert the battery, be sure not to let the back end rest on the top of the rudder or it will bend and eventually crack, Just hang the back end of the tail boom off the bench. Overall, I give this airplane a grade of A-, The only reason it's not a full A grade is the minor design weaknesses noted.
On Sport Cub 1.3m PNP
share ' Share Review by Sbfrc on 13 Aug 2017 facebook facebook Share Review by Sbfrc on 13 Aug 2017 twitter twitter Share Review by Sbfrc on 13 Aug 2017 LinkedIn linkedin Share Review by Sbfrc on 13 Aug 2017
08/13/17
Was this review helpful? 0 0
H
Hdfly 5.0 star rating
10/18/16
i love this plane
Review by Hdfly on 18 Oct 2016 review stating i love this plane
i love this plane. im a newby and went out the first day and flew 9 flights and crashed 8 of them..:) broke the nose off completely. went out after gluing and flew 5 more and crashed all 5 broke off the tail unit. after gluing and toothpicks galore went flying and flew 3 times and landed pretty 2 and prop came off, crashed slightly. went back flew 3 times landed 2 times fair and crashed severely the 3rd time. went out and bought a simulator, crashed and learned to fly and did really good. took my plane out and am flying really sweet...:)
this has got to be the toughest freaking beginner plane i've ever seen..haha...lol.. just ask my wife..:) would highly recommend to anyone from beginner to intermediate. fun to touch down and do tricks with and fly bys at 5 ft pretty as can be..:) i give it 5 stars..:)
theres so many tooth picks and glue holding this thing together that its hard to believe it can stay in the air..but it does and very nicely..:)
On Sport Cub 1.3m PNP
share ' Share Review by Hdfly on 18 Oct 2016 facebook facebook Share Review by Hdfly on 18 Oct 2016 twitter twitter Share Review by Hdfly on 18 Oct 2016 LinkedIn linkedin Share Review by Hdfly on 18 Oct 2016
10/18/16
Was this review helpful? 0 0
1 2 3 4 5 6 7