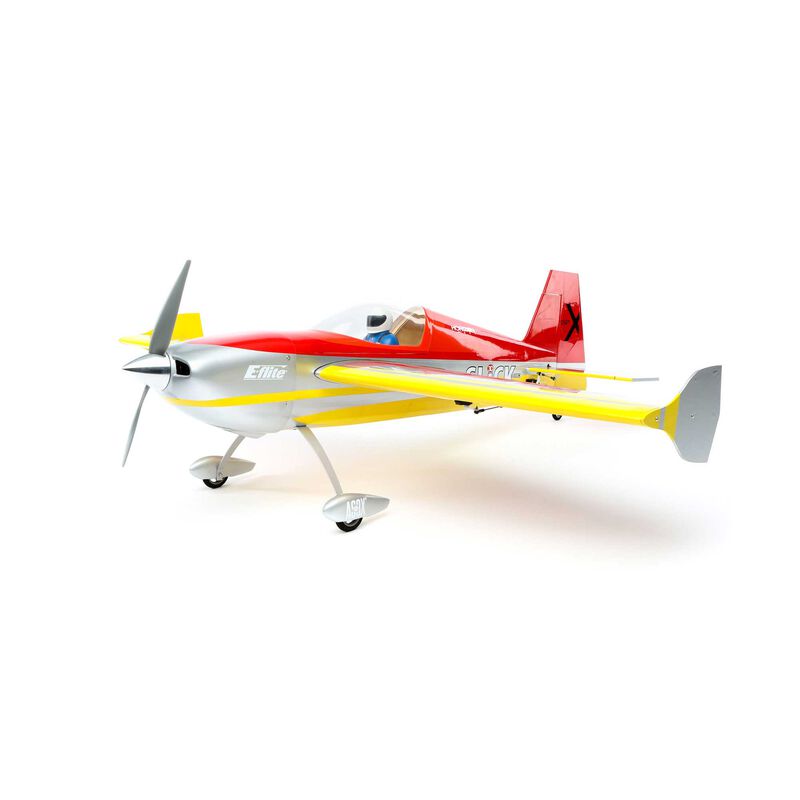 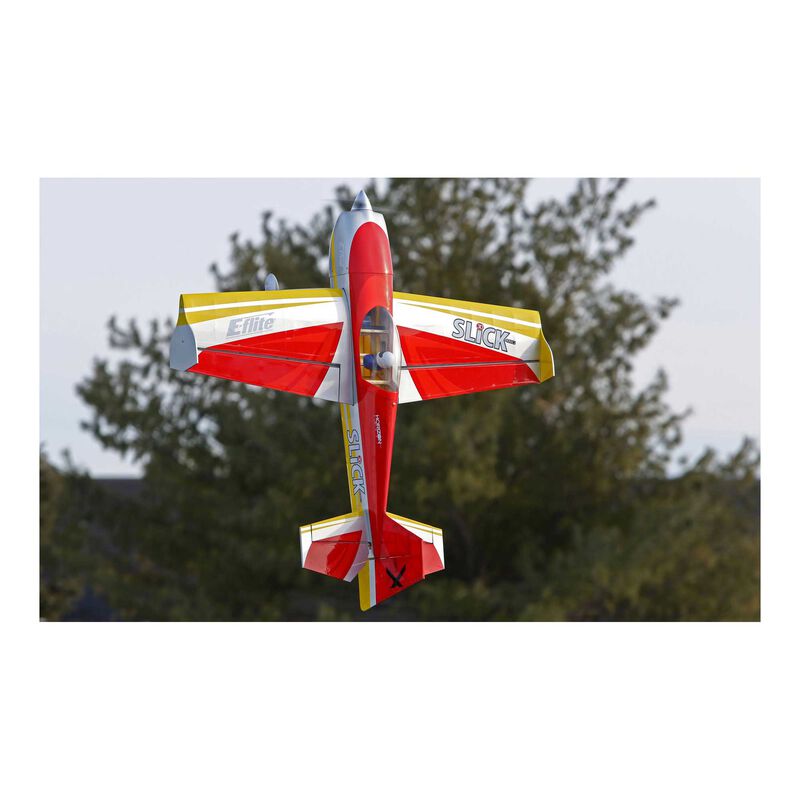 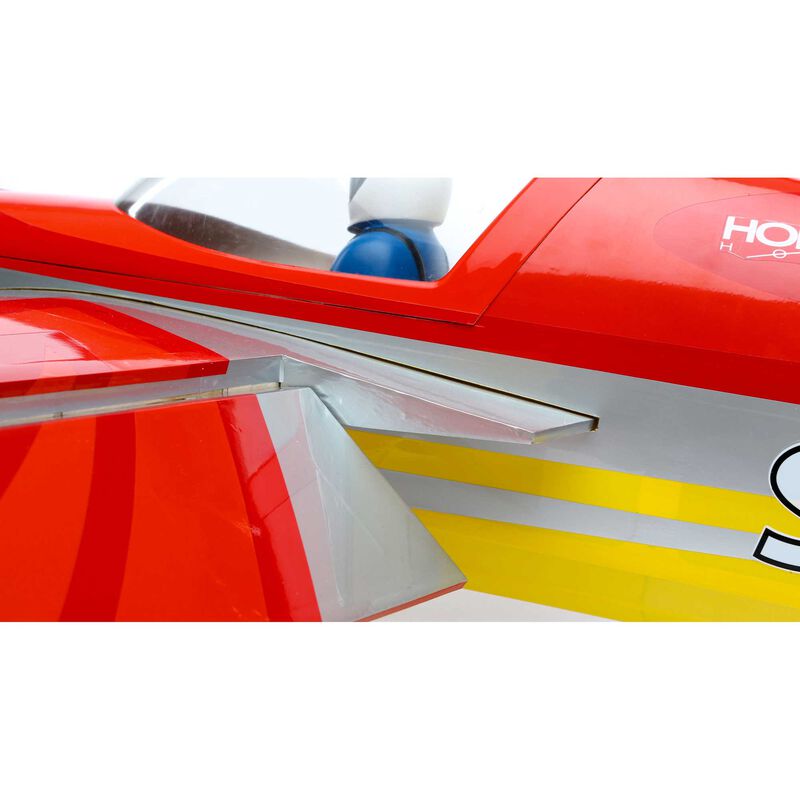 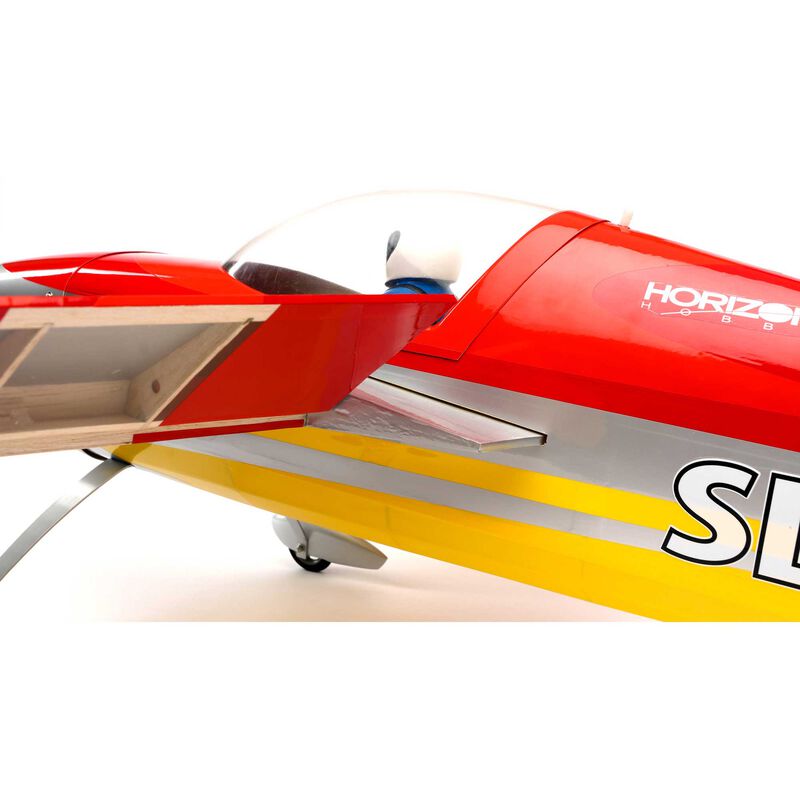 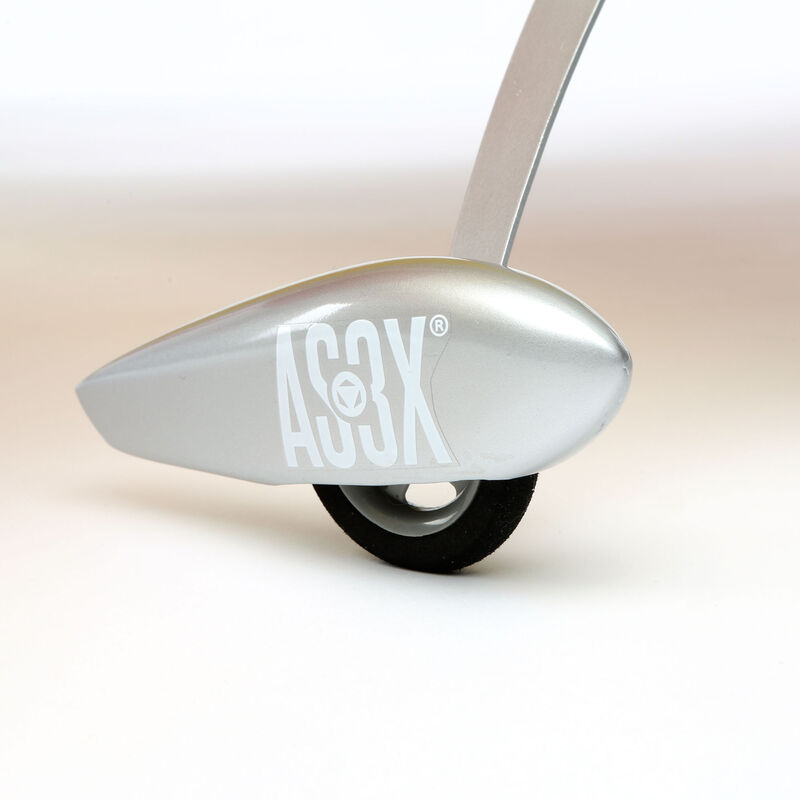 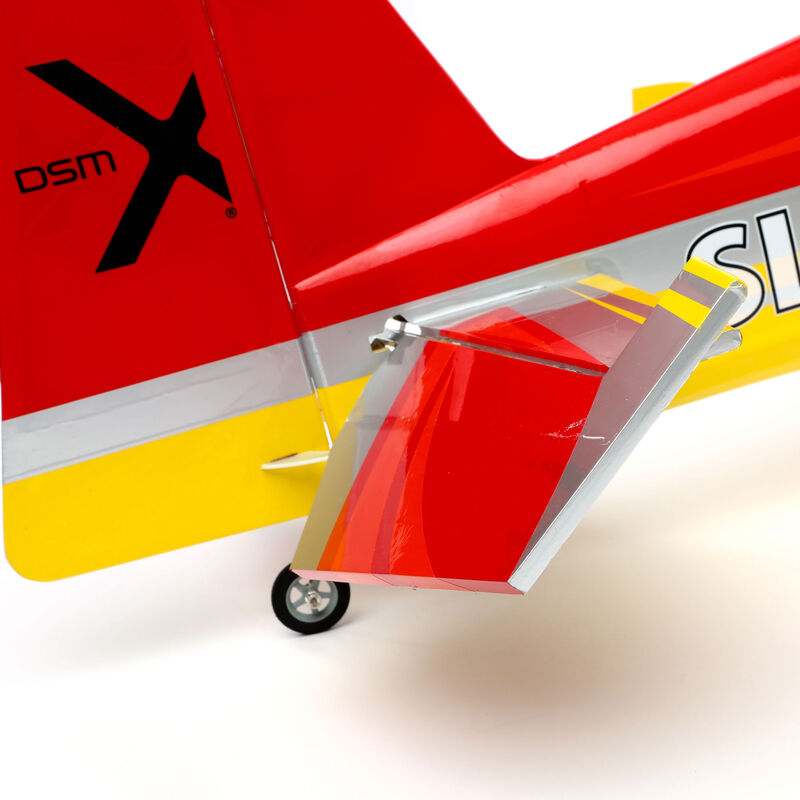 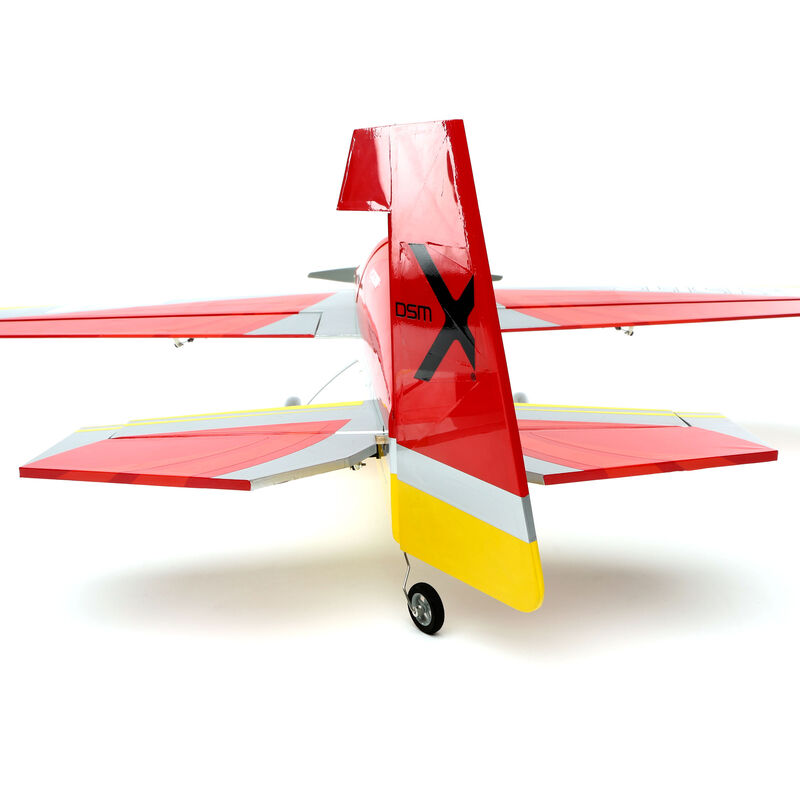 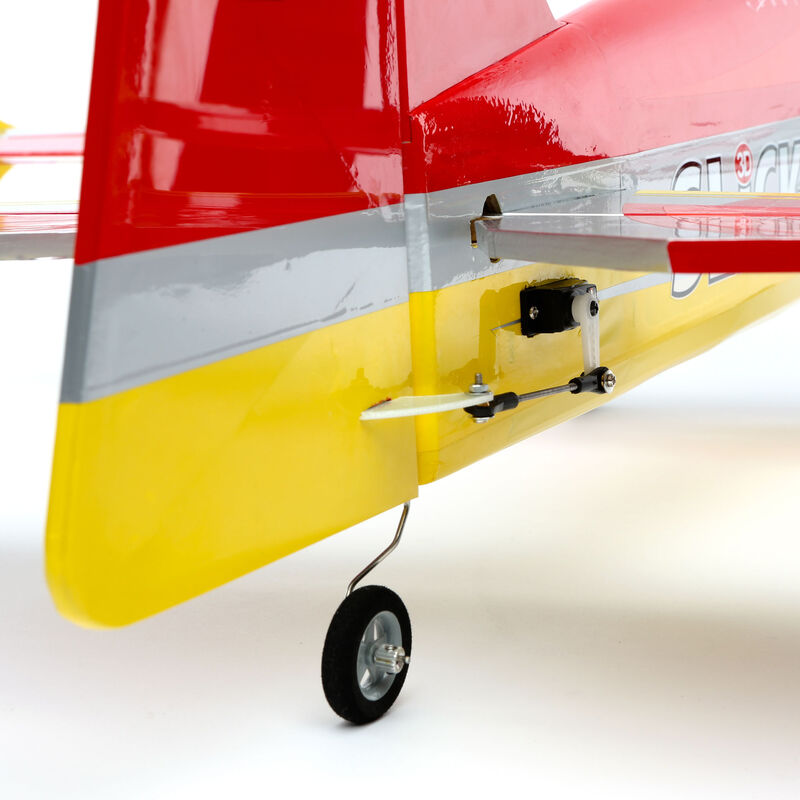 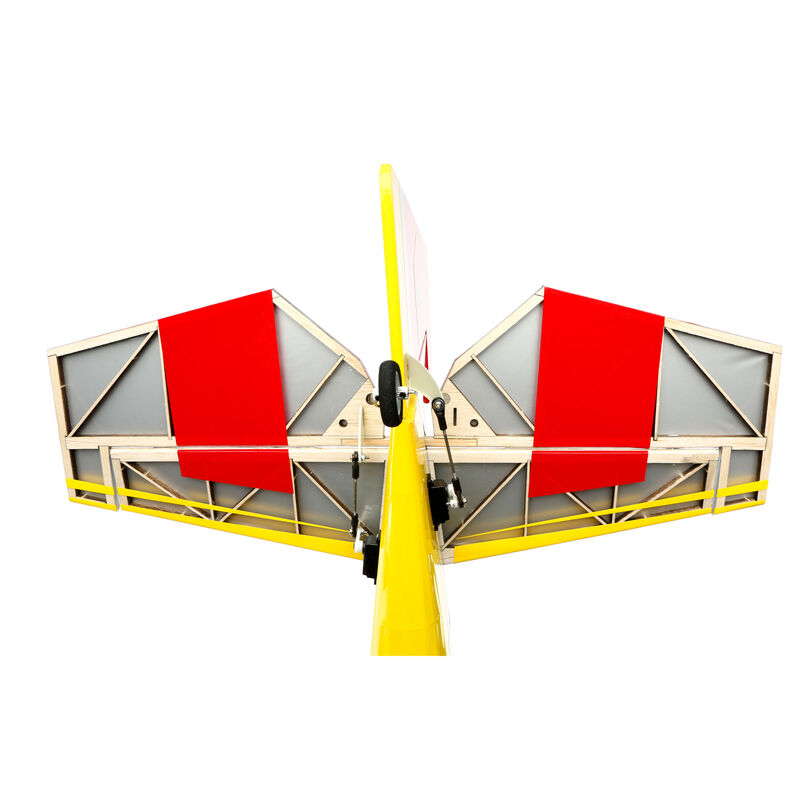 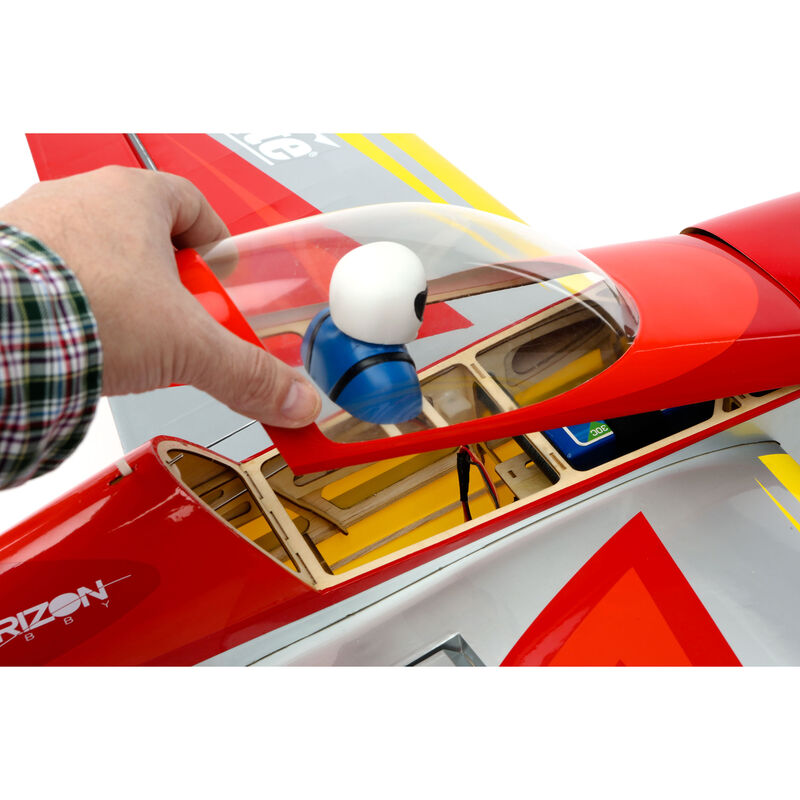 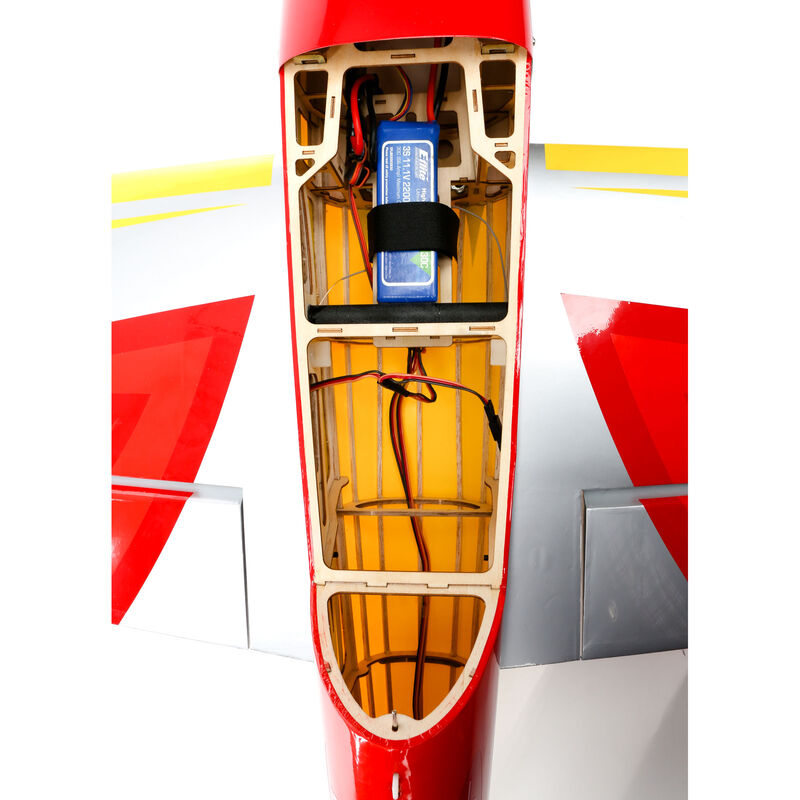 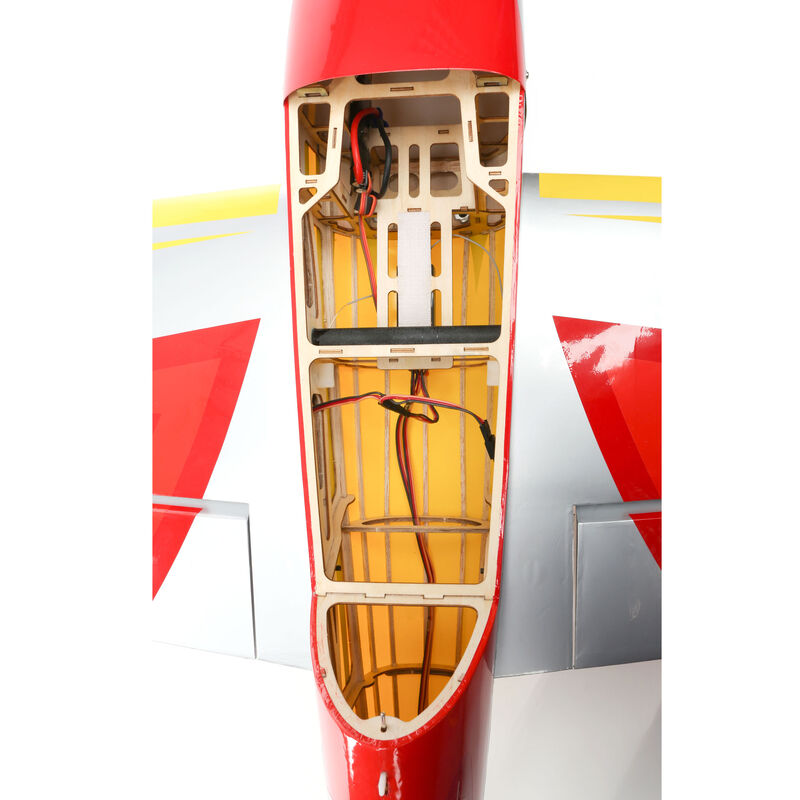 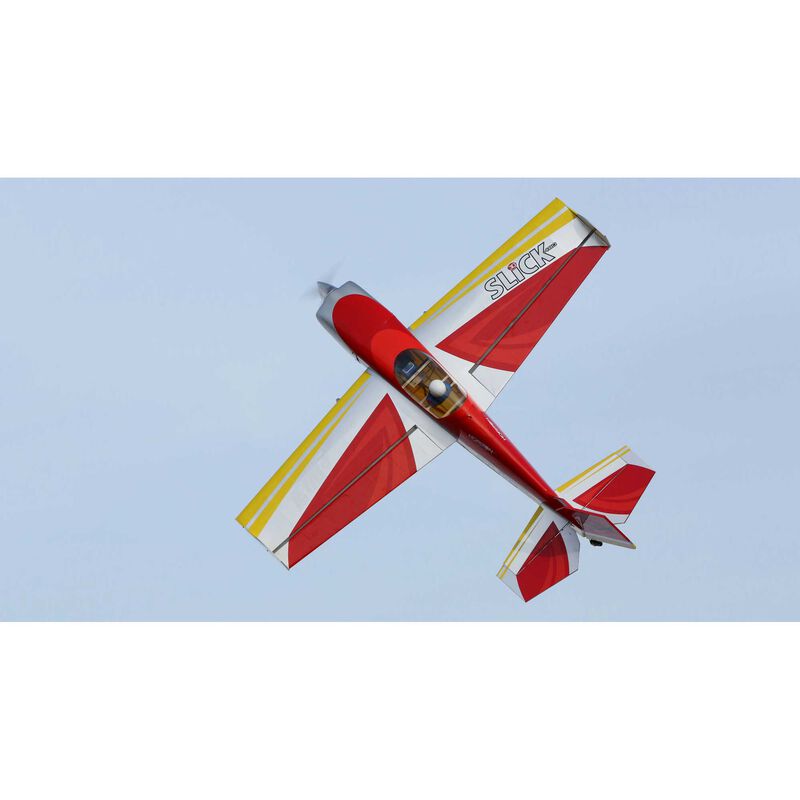 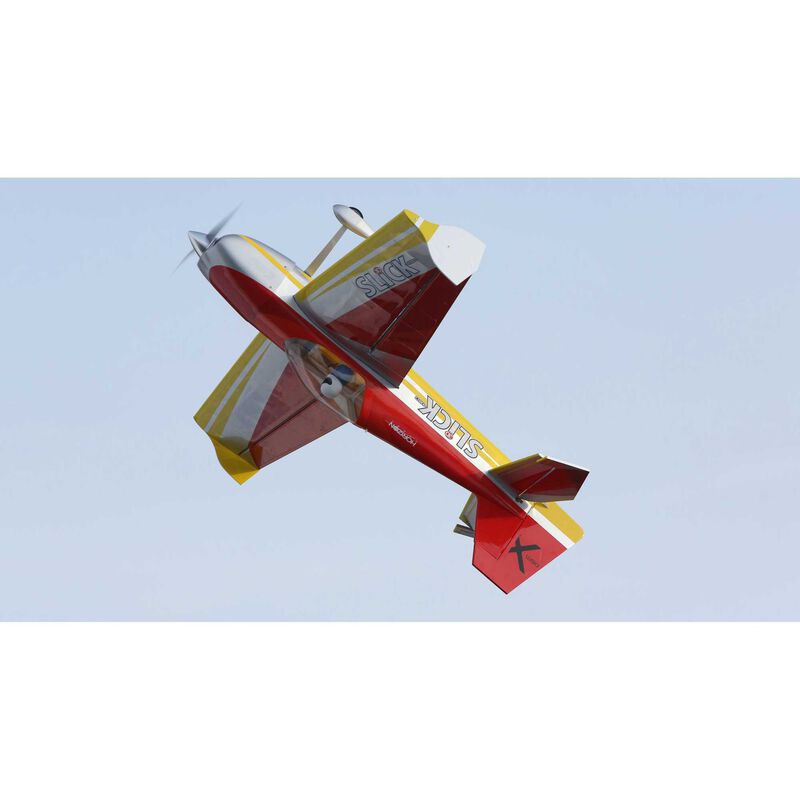 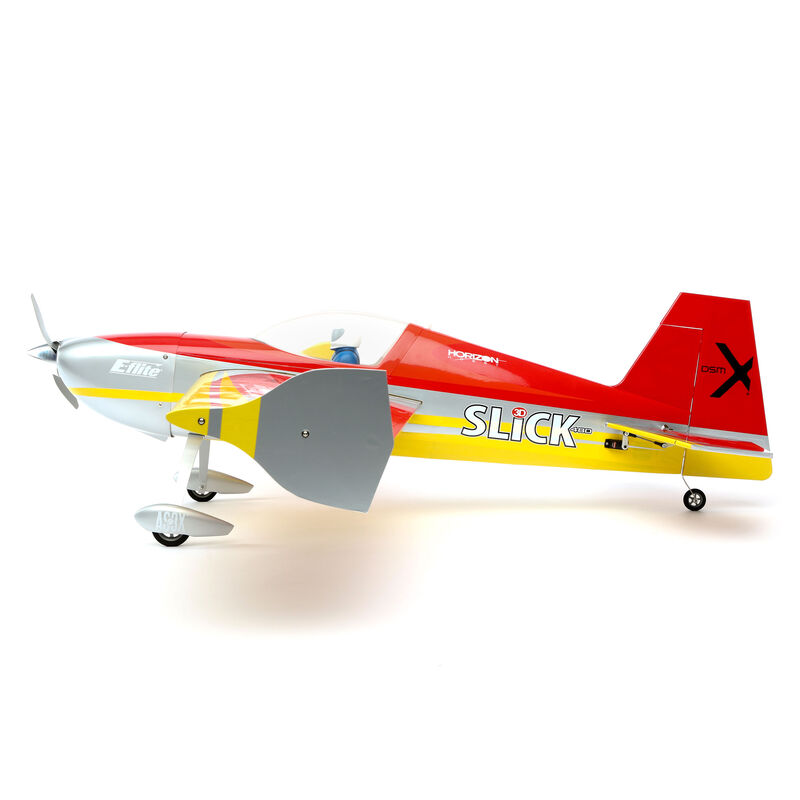 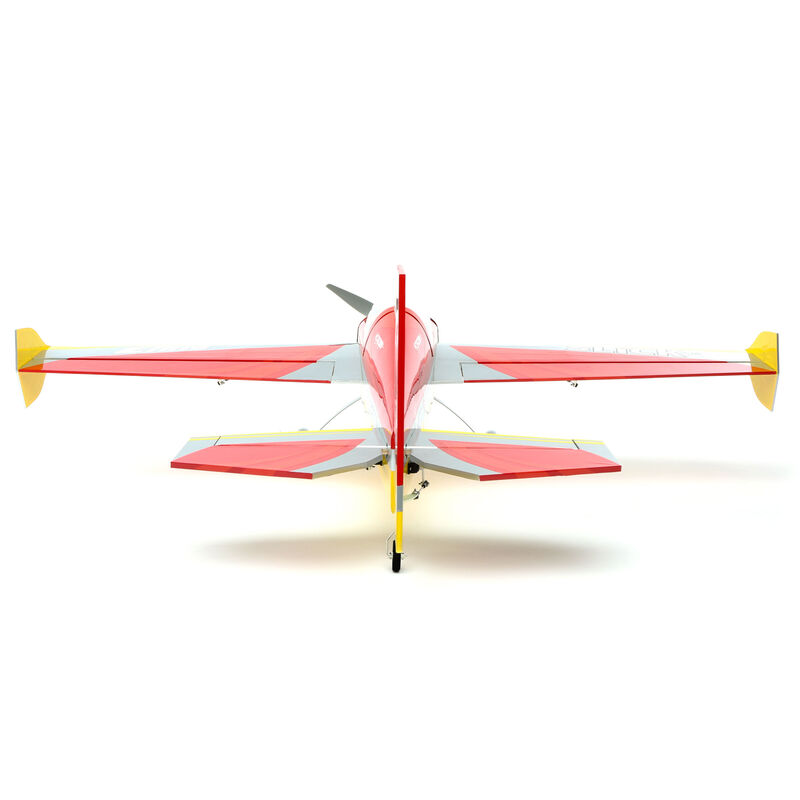 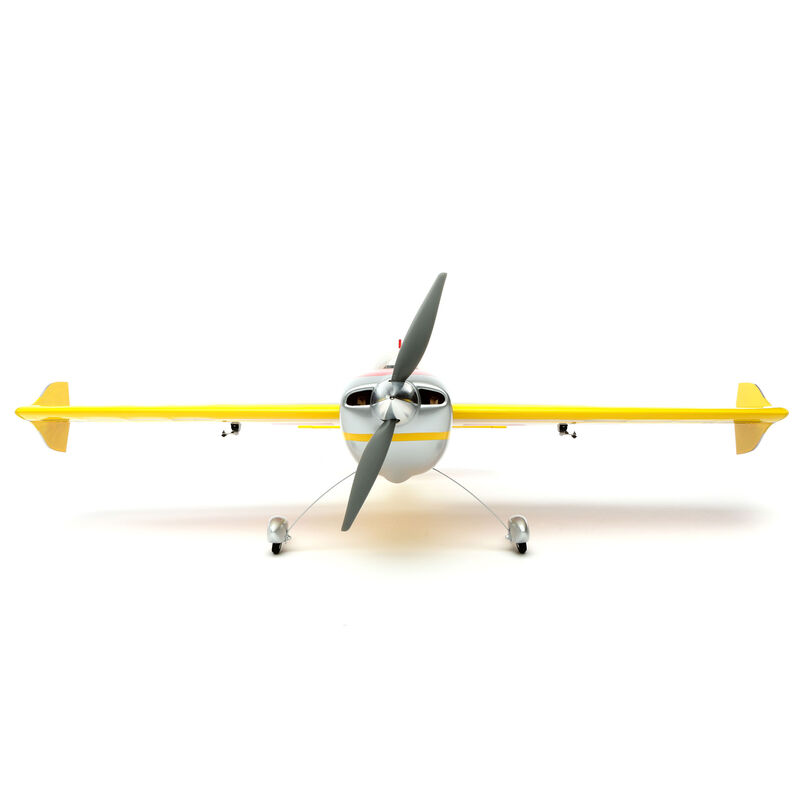 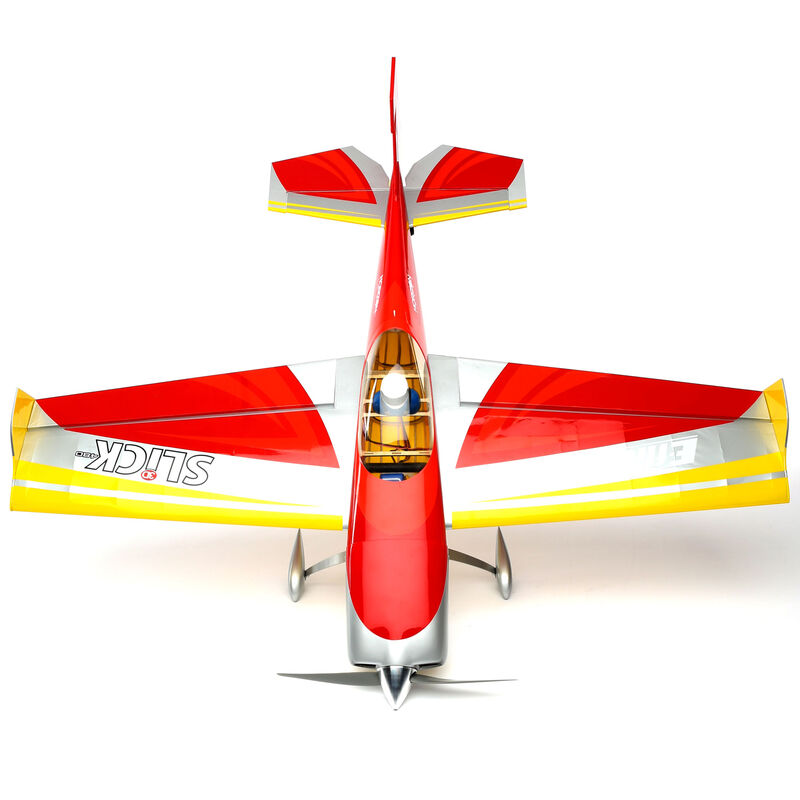 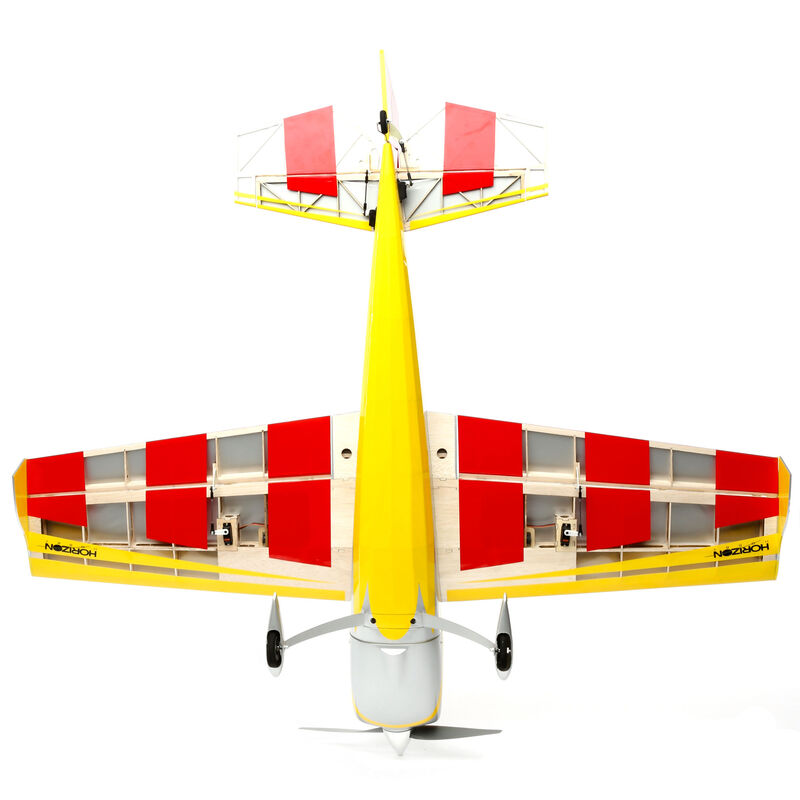 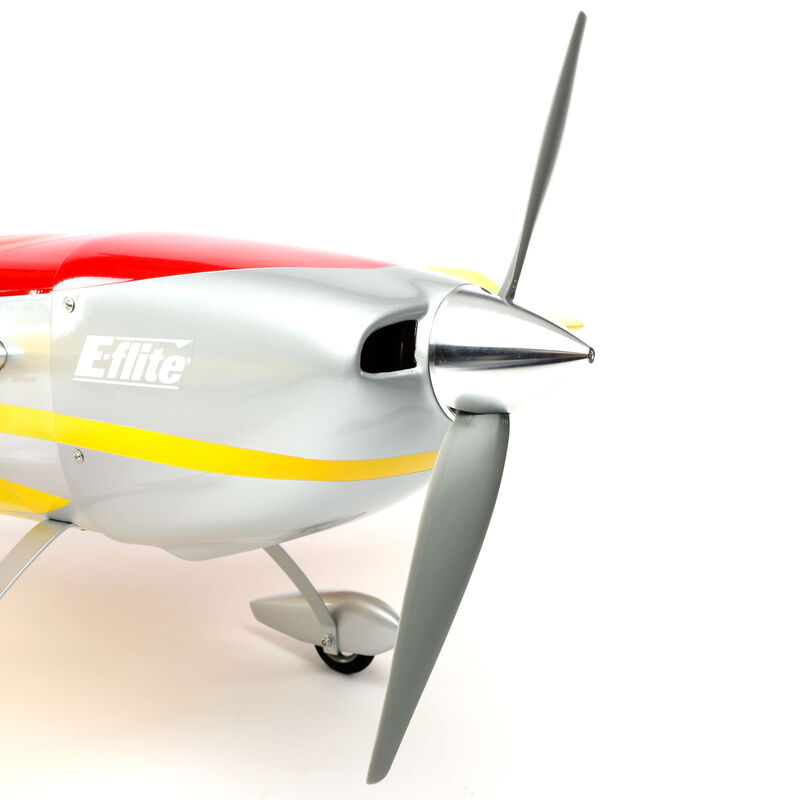 Item No. EFL2865
This Item is No Longer Available

The E-flite® Slick 3D 480 ARF is an aerobatic masterpiece that’s ideal for enjoying thrilling performance in a small field environment. It achieves the 3D vision in every detail from its striking UltraCote® covering scheme to its laser-accurate balsa construction-all designed in a way that makes a popular power system optimal. The result is a level of style and maneuverability that’s sure to inspire you to take your flying to a new level. Plus, it won’t take long to get flying thanks to great features and proven accessory recommendations.

The recommended E-flite power system was designed around the popular and economical 3S Li-Po battery pack in the 1800-2200mAh range. For the ultimate in agility and stability, install the Spektrum™ AR636 DSMX® 6-channel receiver with AS3X® technology-engineered to give you thrilling 3D performance that will keep you coming back for more!

Ultra-Lightweight Construction
The Slick 3D 480 is extremely lightweight without the compromise of design strength. Accuracy and quality of the all-wood construction can be clearly seen through the transparent UltraCote® Lite covering. The recommended Spektrum™ A3030 high-torque, digital sub-micro servos deliver precision that’s a compliment to the crisp throttle response you’ll get using the Park 480 motor.

Optimized For Aerobatics
The Slick 3D 480 has a no-holds-barred approach to design and performance with 3D-size control surfaces that offer very positive control authority, even at low airspeeds.

Easy Field Assembly
The canopy includes a latch release mechanism that combined with a thumbscrew security system for the plug-in wings means that there are no tools needed to assemble the model at the field.

Powered by
3.9 star rating 8 Reviews
0 Questions \ 0 Answers
ask a question
write a review
(4) (1) (1) (2) (0)
Show all reviews
ask a question
write a review
Thank you for posting a review!
We value your input. Share your review so everyone else can enjoy it too.
share
share
share
Thank you for posting a review!
Your review was sent successfully and is now waiting for our staff to publish it.
Thank you for posting a question!
Please click on the link in the confirmation email we just sent you to submit your question.
Your question will appear on the site once someone answers it.
write a review
ask a question
Updating Results
Verified Reviewer
0.0 star rating
09/18/20
Review by Anonymous User
On
share ' Share Review by Anonymous User facebook facebook Share Review by Anonymous User twitter twitter Share Review by Anonymous User LinkedIn linkedin Share Review by Anonymous User
09/18/20
Was this review helpful? 0 0
N
Nedski 5.0 star rating
01/25/15
A great first ARF plane. Very Aerobatic
Review by Nedski on 25 Jan 2015 review stating A great first ARF plane. Very Aerobatic
I have, and have flown, lots of foamies. I wanted to move into ARF's for their visual appeal, and for the challenge of learning how to assemble them. This Slick is my second ARF, the first one being from a supplier who prides themselves on Precision. I was a bit disappointed as I assembled that first ARF, with parts missing from the kit, and/or not fitting precisely together. So, I bit the bullet on this Slick.
First off, I was very pleasantly surprised with the quality of this ARF. No wrinkles in the covering, all the parts included, and fitting together easily and precisely. I kept saying to my wife, &quot;Wow, I'm happy with the quality of this plane. What a breath of fresh air.&quot;
Not that there were not some challenges. Both of the ARF's I've now assembled have arrived with servo pockets that are a little short. The servos have to be inserted on an angle, due to the wires coming out of one end, so the pocket opening has to be a bit larger than the actual servo length. This has not been taken into account when the planes have been constructed, so the pockets have to be enlarged by about 1/32&quot; at each end, getting the opening just about over to the screw holes.
I can't emphasize enough that one has to be prepared to do that enlarging, and has to be prepared to do it patiently, and with the right tools. If the openings are just carved larger with a razor knife, the glued on plywood doubler at the screw hole will probably be dislodged, and it's tough to glue them back on. A dremel tool, a good small file, a sharp X-Acto knife, and plenty of patience, are all required to do a good job of that enlargement.
But, that was about the only semi-major hurdle involved in the Slick's assembly, and that was not bad once I knew what to expect and do.
It is not precisely spelled out what one needs to complete this plane's assembly:
-I use, and like a lot, a DX6 transmitter.
-a receiver. I just used a simple, basic 4-channel receiver, an AR400, since I don't use the AR636 AS3X receivers, due to not having an I-Phone to program them with. I don't mind flying by the &quot;seat of my pants&quot; with the basic receivers.
-I use the TM1000 telemetry units in all my often-flown planes, to continually monitor flight-pack voltage. I find great peace of mind in not having 1/4 of it focused on trying to guess how long it'll take for the battery to run out, flying the way this flight is being flown. The voltage gets down to 10.5 volts, I land the plane.
-Four A3030 servos (although next time, I'd probably lean toward the HiTec metal gear, digital servos, HS5065 MG, for the slightly higher quality and durability of the metal gears.
-40amp ESC, mounted on the outside, side, of the motor mounting box, right behind one of the cowl's openings, for good cooling.
-I tried a 480 size, 1020Kv motor from a busted up Artizan at first, and the plane flew well, but I wanted just a tad more power, so I switched the motor out for an EFlite Power 10, 1100Kv motor, which gets good reviews, and on which the plane flies very nicely and aerobatically at 70% throttle, and really hauls butt at 100%. Plenty of power to play with from that motor. With that Power 10 motor, the 1/2&quot; spacers which come with the kit are not needed, and the right spacing is achieved with the motor bolted right to the motor-box firewall
-I'm using the recommended 12x6E APC prop..
-I fly with EFlite 2200 batteries, for good 8-minute flights. I mount the battery sideways in the plane, right in front of, and strapped to, the carbon fiber wing tube, to achieve a COG close to the recommended one, but about 1/8&quot; in front of it. The plane flies well with that balance. Parkzone 2200 batteries are a tad longer than the EFlite ones, and can be used, but are relly too tight for that sideways mounting.
-I got the EFlite 1-3/4&quot; aluminum spinner, since the recommended 2&quot; was out of stock, and the plane looks very nice with that aluminum spinner.
-The recommended 1/9 EFlite aerobatic pilot was out of stock, so I got a Yak 54 CZ pilot which fits in the canopy nicely. (I actually have a Troll Doll coming, to put in as a pilot, for a humorous look..)
-Two 12&quot; servo extensions, and a Y servo extension, will be needed.

The instructions are very detailed and complete, and I highly recommend just studying them, and following each step precisely.
The parts are high quality, and fit together well. Where thread lock is called for, use it, especially in the servo linkage hardware. The nuts on those linkages are not lock nuts, and depend on the thread lock, of some sort, to keep from vibrating loose, which would be a &quot;bad thing&quot;.
I drilled some small holes in the rudder, and did some traditional stitching with strong thread around the tail wheel rod, with the stitching covered with CA glue, to really secure the tail wheel assembly in place.
I don't use small wheels, or wheel pants, since I like the stability of flying off, and landing on, grass. So, I installed 3&quot; Sport Wheels instead, with no wheel pants. The supplied small wheels, and wheel pants, look nice, but the pants are easily broken in a wobbly landing on a hard surface, and the small wheels don't function well in grass. The 3&quot; wheels work great, though.
If the instruction are followed precisely, the assembly is a fun one for anyone attuned to model building and mechanical skills. EZPZ.
I set up the rates for the recommended low rates, since I only do basic aerobatic flying presently, and no 3D. I do use 20% expo to soften the control inputs a little.
The reason I detail this plane so much, is that it's a lot of fun for my type of intermediate aerobatic flying, and is a high quality ARF to move into from foamies. Loops, inside and outside, Cuban 8's, rolls, snap rolls, spins, knife edges, inverted flying, are all easy and stable with this plane.
Enjoy it. I know I do.
I guess all I'd add is that the color-sheme and design are simply pretty. It's the best looking plane in my hangar. Will I be doing knife edges down the runway, 3 feet off the ground, as in the demo vid, any time soon? Not a chance. Don't want to bust this one up. 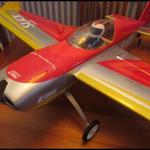