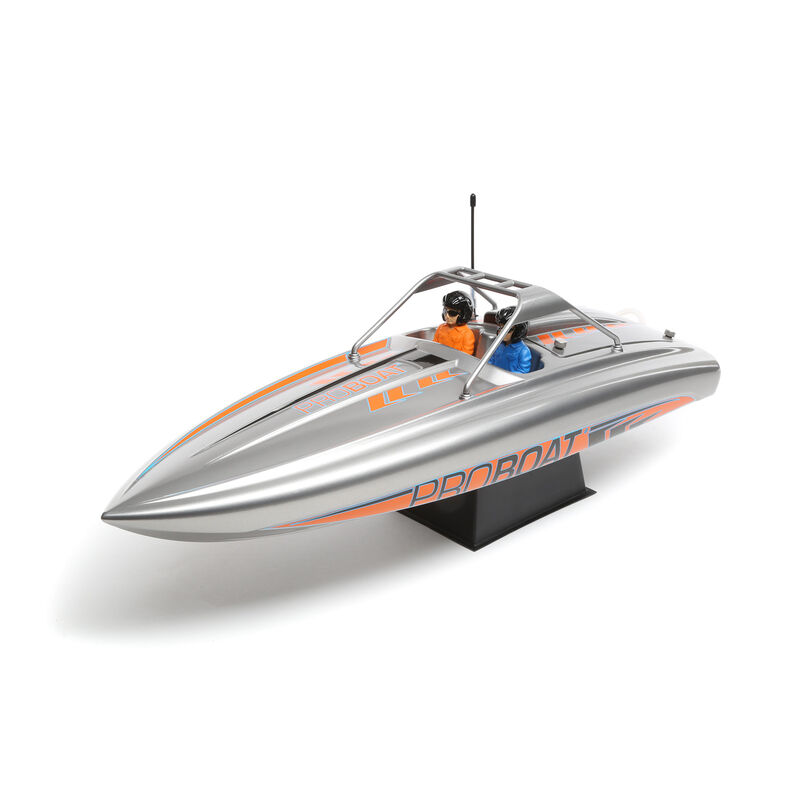 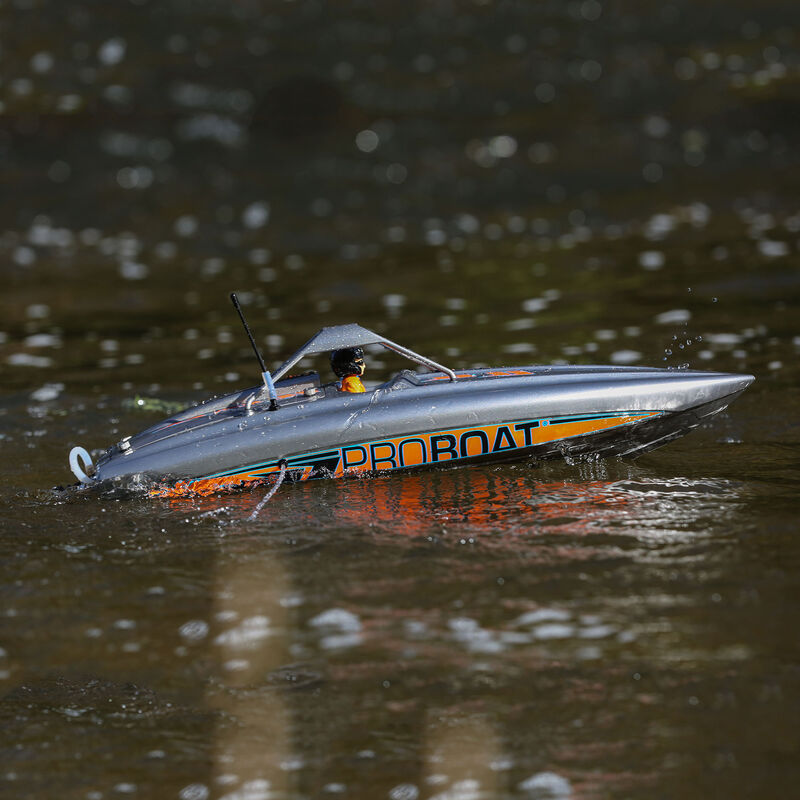 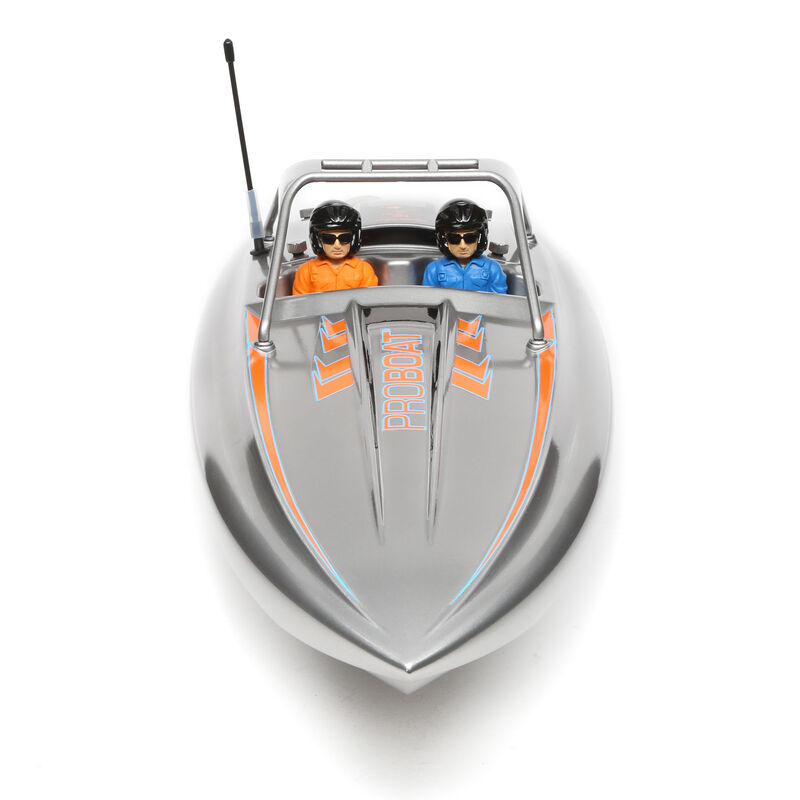 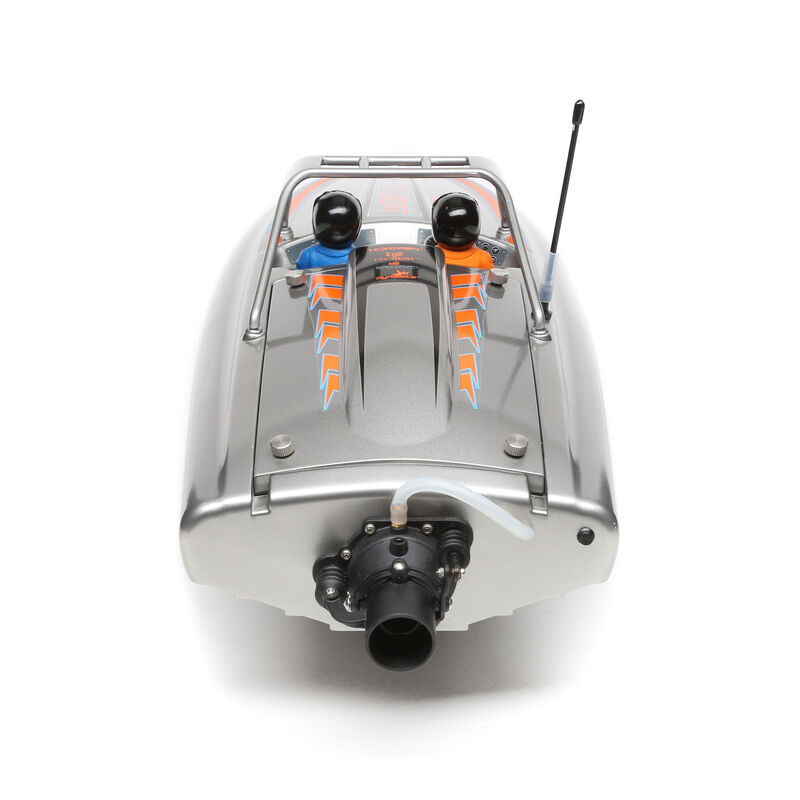 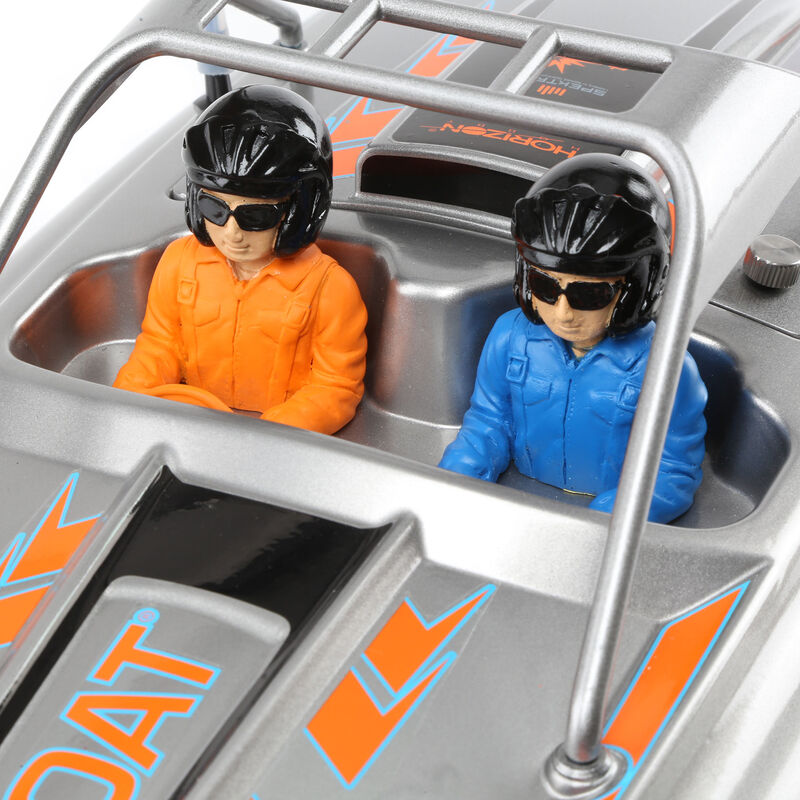 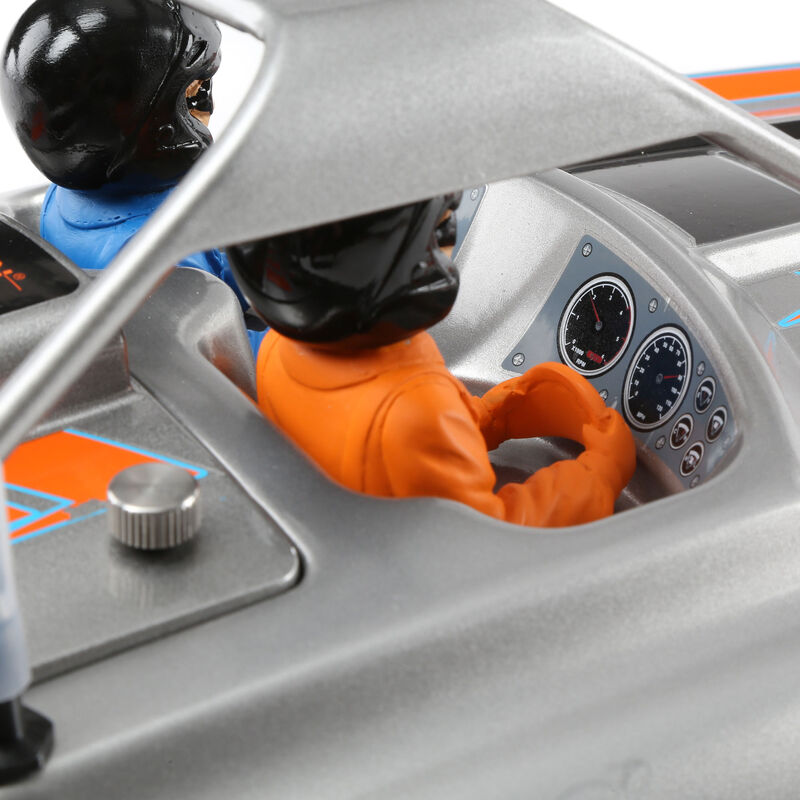 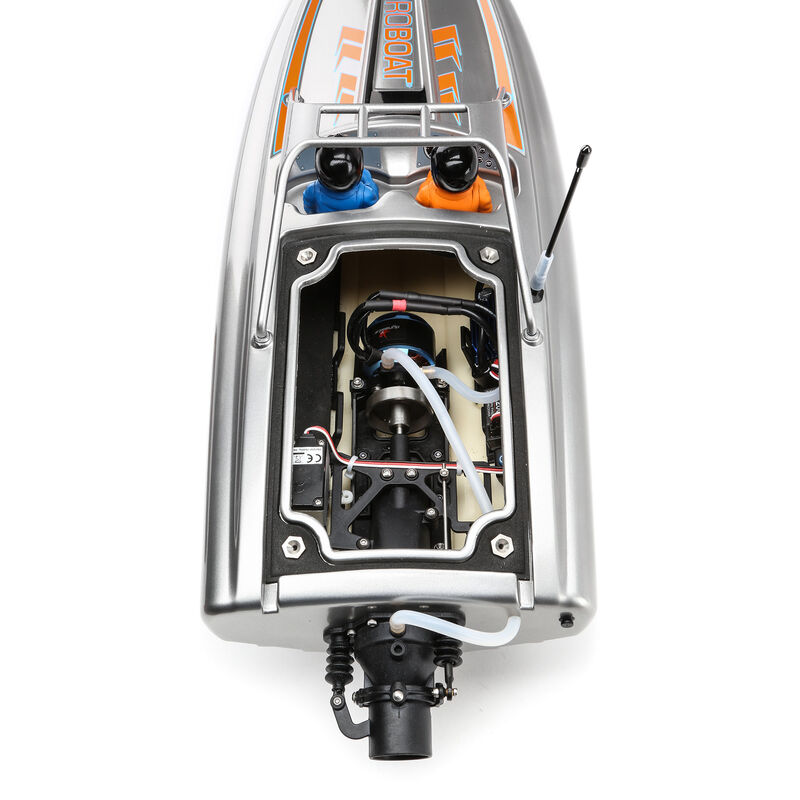 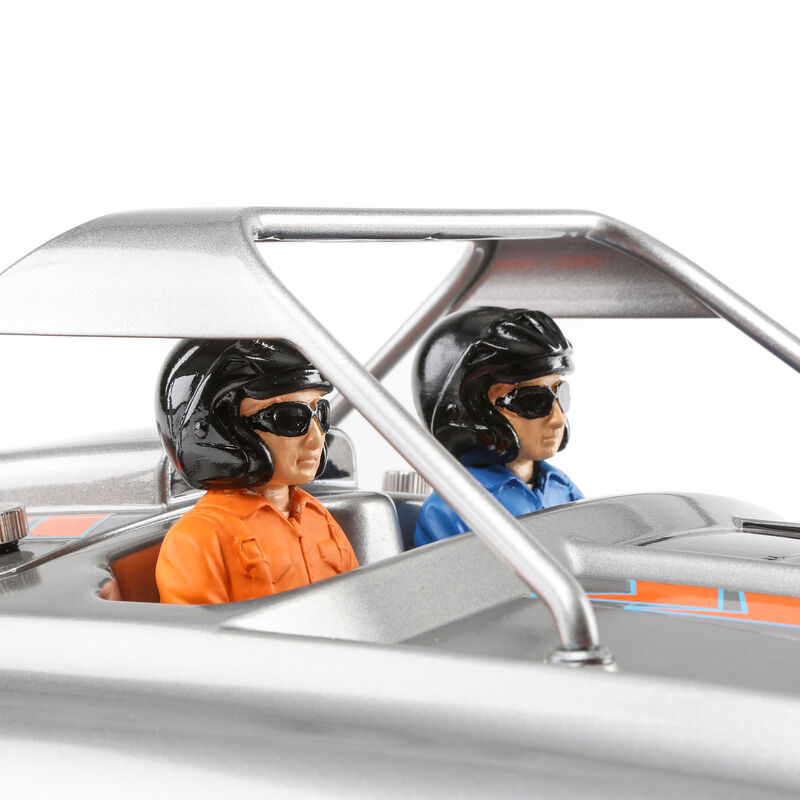 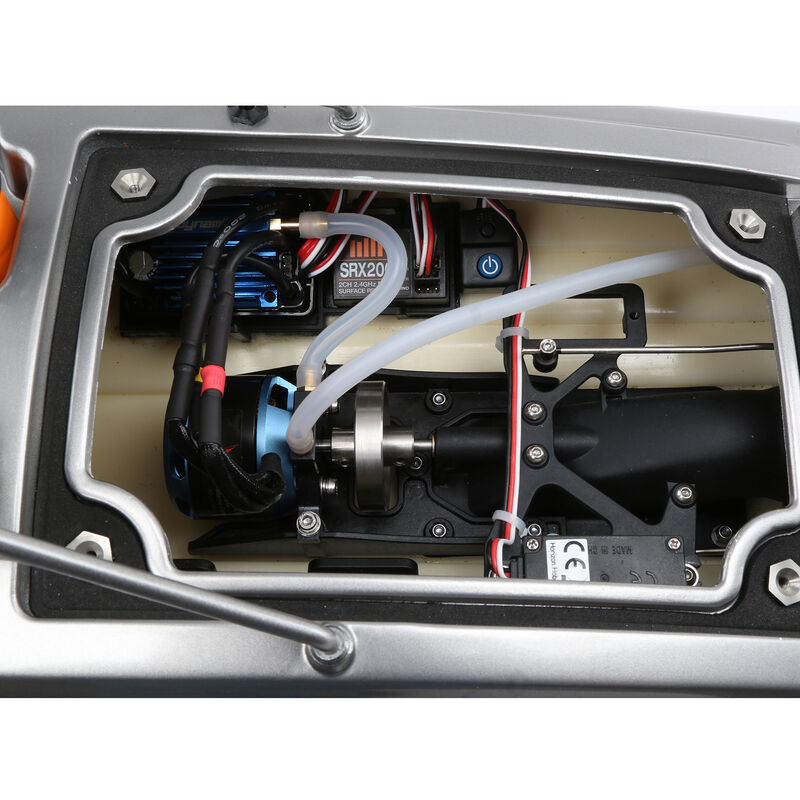 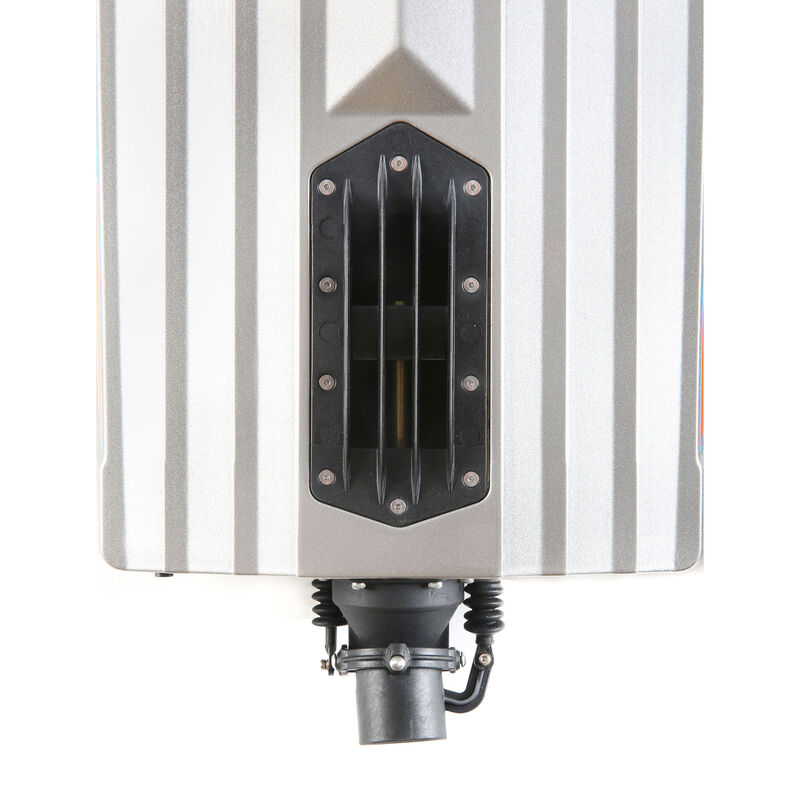 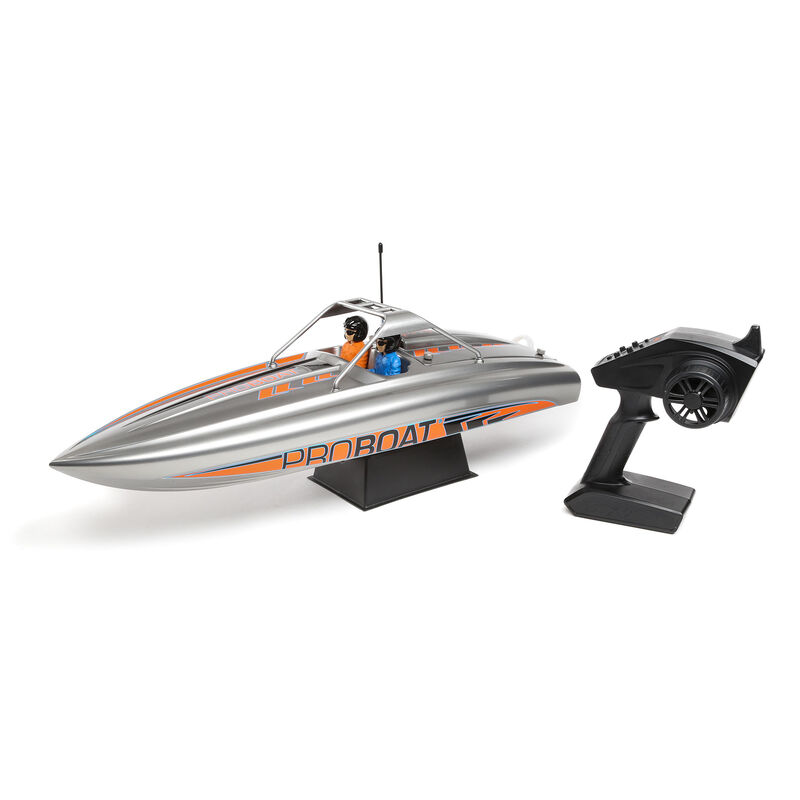 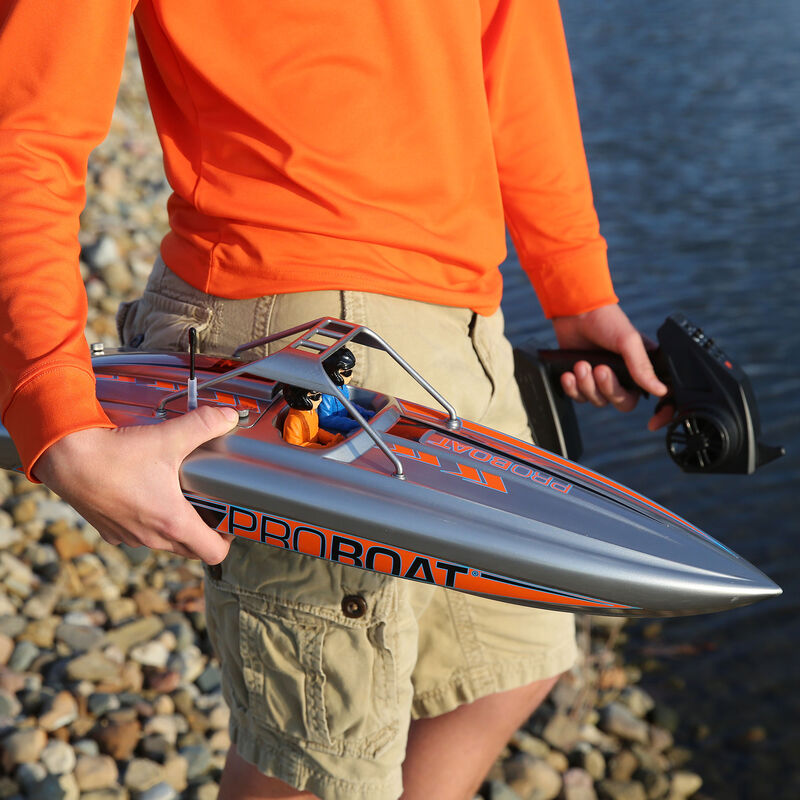 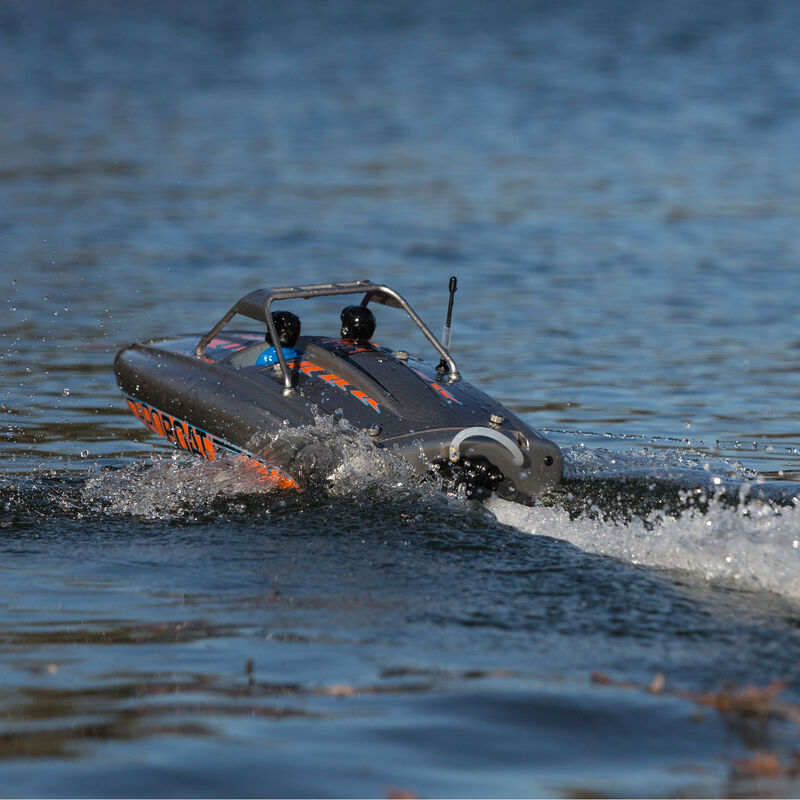 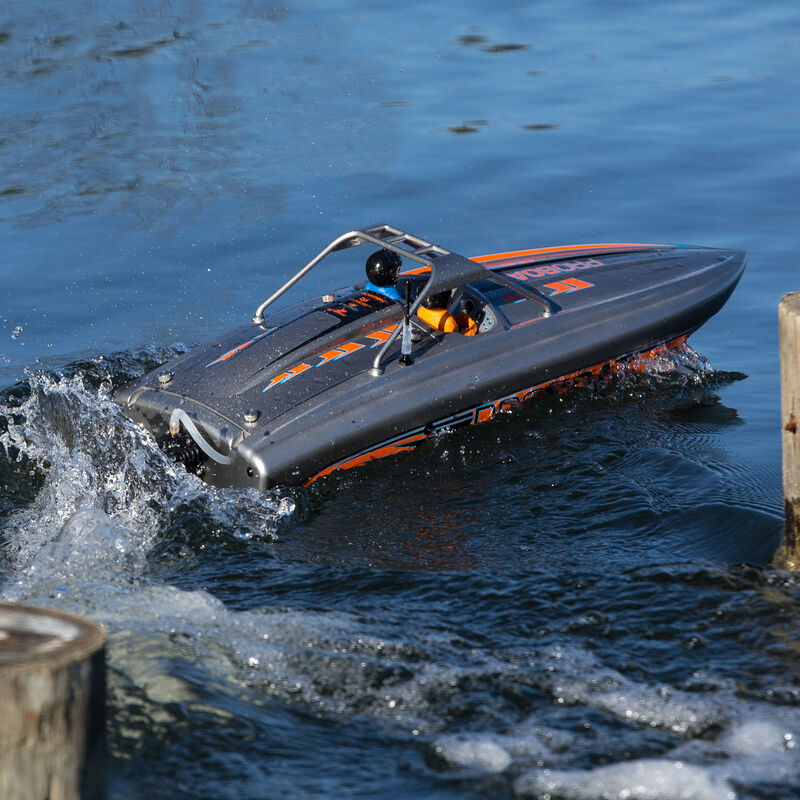 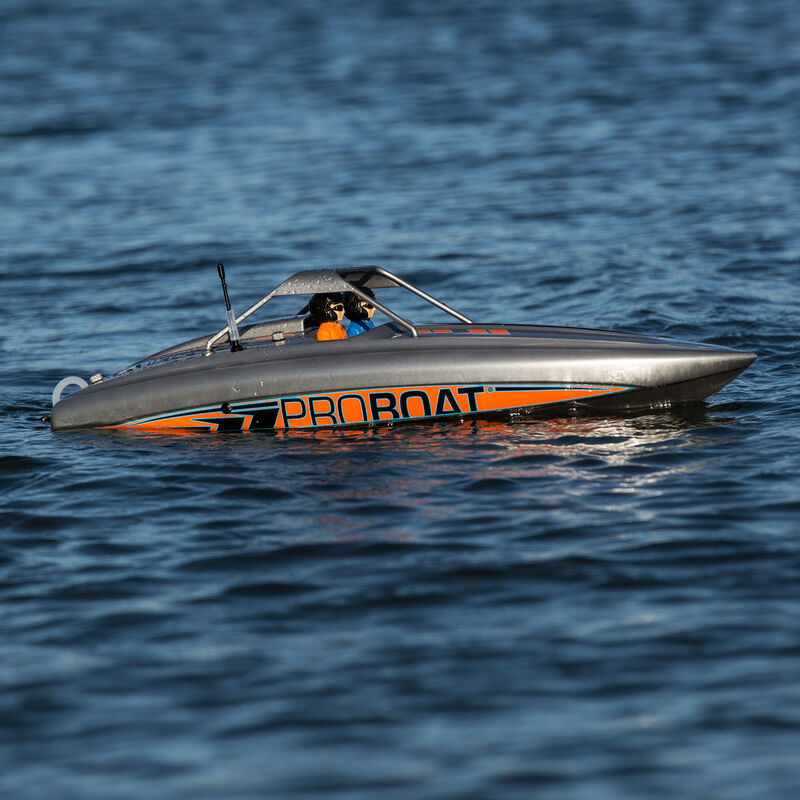 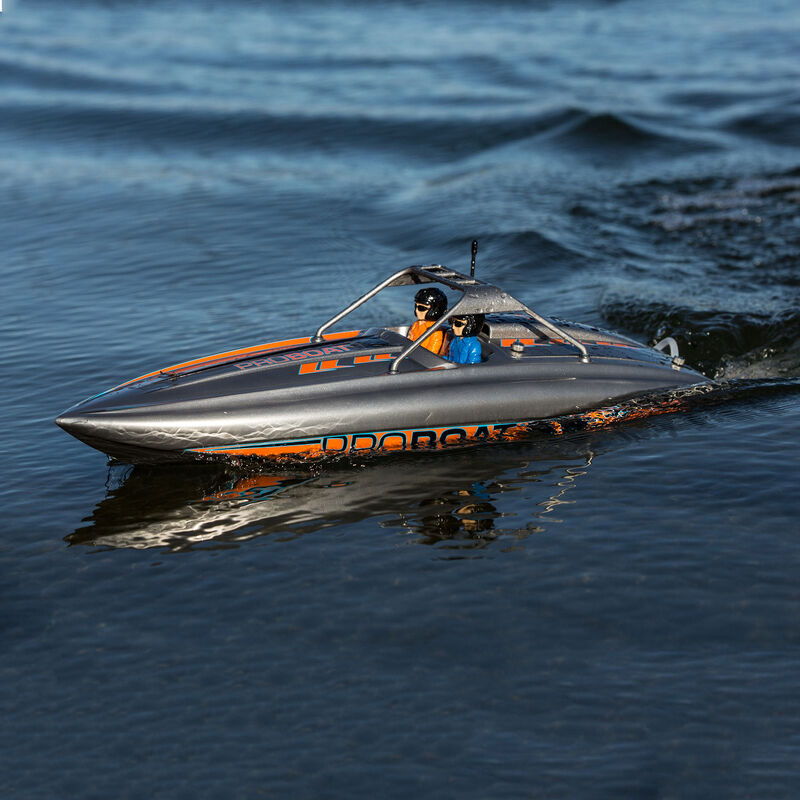 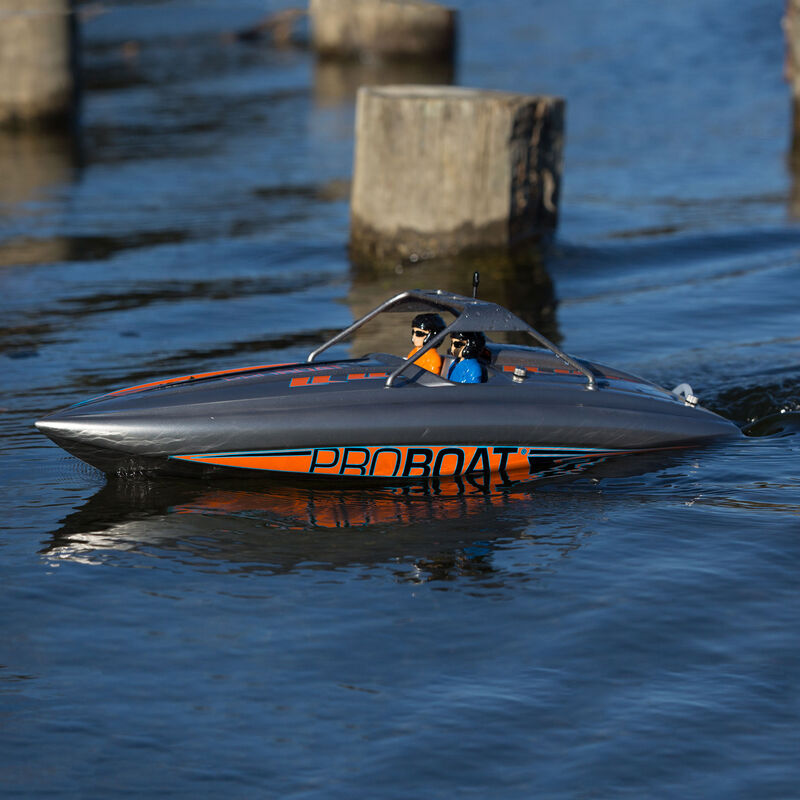 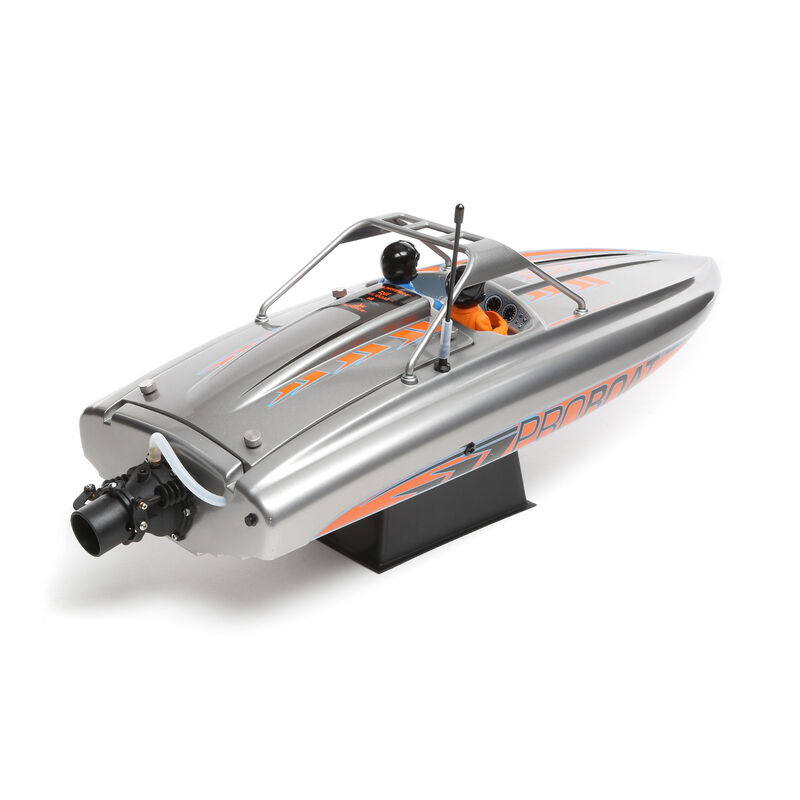 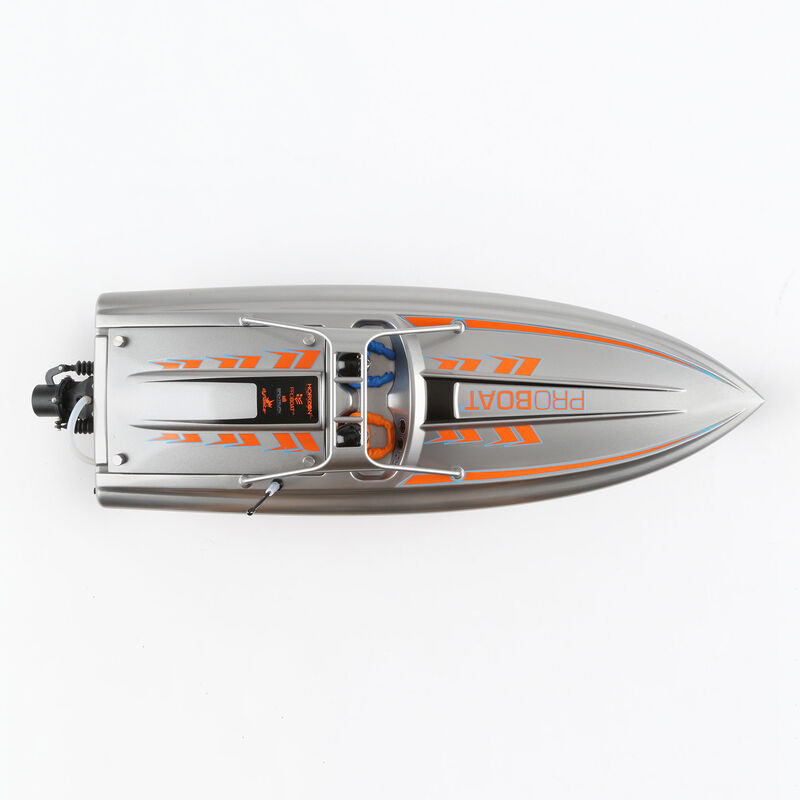 There's nothing like riding in a full-scale jet boat, from jumping waves to darting across the lake. Jet boats can change direction in a heartbeat, providing thrill ride after thrill ride. The 23-inch RTR Deep-V River Jet Boat lets you cruise anywhere-including through rapids and moving water. The jet boat doesn't have an exposed propeller, turn fins or rudder. And with its powerful propulsion system, this boat can run in minimal amounts of water-even just a few inches. Thanks to its self-righting feature, the boat flips back over in a matter of seconds by activating the throttle. So whether you're new to RC boating or an experienced captain, you're sure to have a blast jumping rapids and running upstream.

Thanks to the boat's self-righting feature, it flips back over in a matter of seconds by activating the throttle. Now you can drive in moving water without the fear of losing your boat.

The high-impact, blow-molded hull lets you bounce off rocks without worrying about cracking the hull.

The included Spektrum™ STX2™ 2.4GHz FHSS transmitter provides a clear, precise connection while the boat is on the water.

Made of the same material as the hull, the canopy is attached by four thumb screws. High dense foam between the hull and canopy keeps water out of the hull and ensures your electronics stay dry.

Self righting this boat is a skill you have to learn. It's not just a simple as hitting the throttle and it flips. You have to rock it, hit the throttle at just the right time. Once you get the hang of it, it works well.

Do parts break, sure, its an rc vehicle, stuff breaks. Take the roll bar and drivers off before you run it in hardcore rapids. There are some upgrades available through shapeways and offshore electric.

Small probs with Jet Boat, Roll bar is for looks, Do not use it to carry the boat. Also dont use it as a camera mount it will come unglued.
The rear hatch can let in a bit of water, Found removing lock nuts from the hold down screws helps alot, If u still get water in then just put tape over the hatch and no more water gets in,

Only other bad thing, None waterproof receiver. I had to waterproof mine, This is a must do.

I got this boat the almost the first week it came out. I put about 10 packs through this boat.

Quality: Some people complained about the hull plastic had issue. I've checked mine. It's solid. May be they got the early shipping bad batch. In fact, I was telling my friend other day &quot;this hull is thick compared to aqua-craft&quot;. I hit a submerged boulder, the boat bounced off it and it left just a scratch on the bottom. My Wildcat hit the same rock and sunk. Paint job is excellent. Electronic is nicely packed in the small compartment. I wish there is more room to insert battery (only negative so far). Long term replace parts for the jet drive could be an issue if they discontinue the product because it's not replaceable like a normal standard drive shaft...but when that happens? :)

Fun: It's a lot quiet than typical boat. Take off like a jet. Hard to quick turn because the jet drive type with no turn fin but that is part of the fun. Some people may not like it. It does not drive like a catamaran for sure.

Value: A bit pricey. I think around $250 for initial release makes sense.

Others: The battery tray is hard to get to. It's hard to reach the second strap. Greasing/oiling the drive train can be tedious. 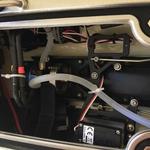 On River Jet Boat 23 Brushless Deep-V RTR
share ' Share Review by Cyber on 24 Mar 2017 facebook facebook Share Review by Cyber on 24 Mar 2017 twitter twitter Share Review by Cyber on 24 Mar 2017 LinkedIn linkedin Share Review by Cyber on 24 Mar 2017
03/24/17
Was this review helpful? 7 0
Slideshow
Slide controls
Loading...
Powered by
R
Roods1
4.0 star rating
01/18/18
Despite the reviews, It's one of the best RTR's.
Review by Roods1 on 18 Jan 2018 review stating Despite the reviews, It&amp;#x27;s one of the best RTR&amp;#x27;s.
I got my River Jet a month ago, and so far, very little issues. The first run was successful, the speed was impressive running on a 2s LiPo. (26 mph) Out of the box it wasn't broken and nothing was loose/missing. Getting it ready is a little bit of a hassle though; the thumb screws on the hatch take about 4 minutes to put in since they keep tightening in one corner and locking up. I fixed this issue by removing the lock nuts on the thumb screws and glue the o-rings in place. The WORST part is trying to put the battery in. I use a 3s 40c and the battery tray is shoved into midship and requires tweezers just to open the velcro straps. It is essential to strap in the battery since the self-righting feature will only work if the battery isn't moving around inside the hull. (Self-righting works pretty good, but I use a recovery vessel) Perhaps the only thing I had a major issue with was the transmitter. It's a Spektrum pistol-grip that is used in many other Proboats. On the first run, I had a radio glitch, and at half throttle the boat turned straight towards the concrete dock at the marina I run at, completely shearing off the fragile roll cage and putting a small white gash off the starboard bow. To make it look less ugly, I cut windshields off of a toy yacht and glued them in front of the two pilots. Now it looks like a speedboat. I found out later that it wasn't a radio glitch, it was actually the thin plastic battery hatch on the transmitter. It must have been molded wrong and it fell off, releasing the batteries, (boat still moving towards a yacht) I quickly put the batteries back in and steered the boat away. Now THAT is something to fix. Just a little electrical tape fixed it. Also to mention that this boat is incredibly fun? With a 3s, (50c, this boat will smoke anything under 30) it'll go about 34-40 mph easy. I would honestly be afraid to use a 4s. Everything runs nice and cool thanks to the awesome cooling system which requires no speed at all. Lubricating the drivetrain takes 30+ minutes, some good grease and and a small set of allen screwdrivers.
On River Jet Boat 23 Brushless Deep-V RTR
share ' Share Review by Roods1 on 18 Jan 2018 facebook facebook Share Review by Roods1 on 18 Jan 2018 twitter twitter Share Review by Roods1 on 18 Jan 2018 LinkedIn linkedin Share Review by Roods1 on 18 Jan 2018
01/18/18
Was this review helpful? 6 0
1 2 3 4