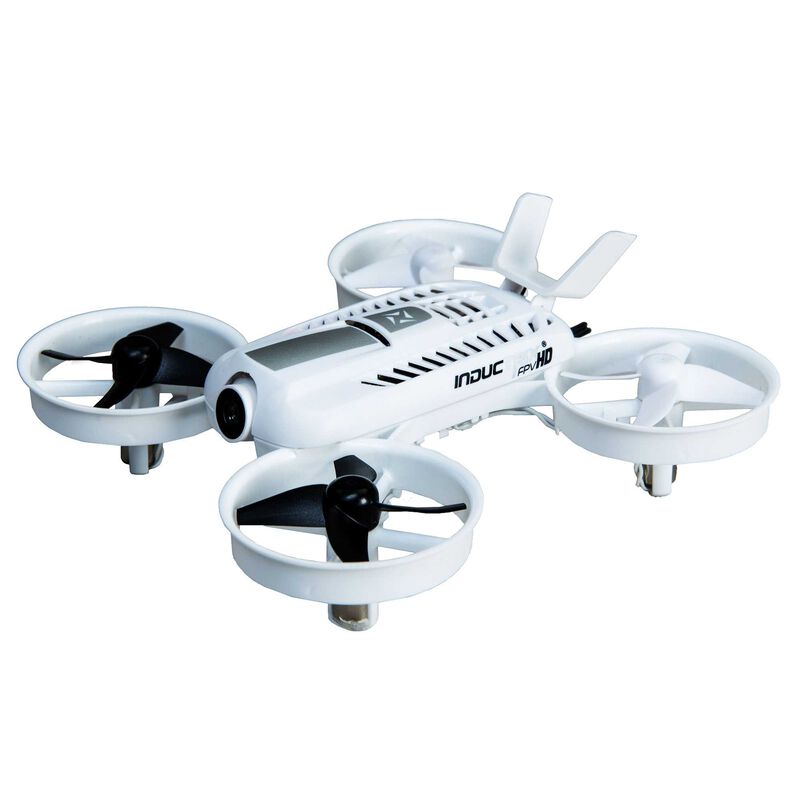 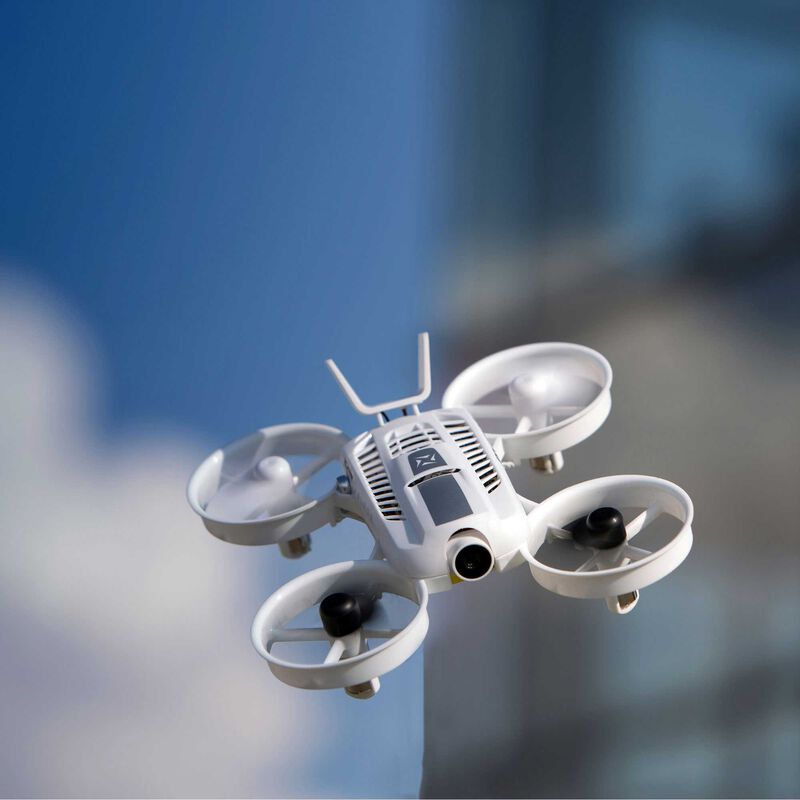 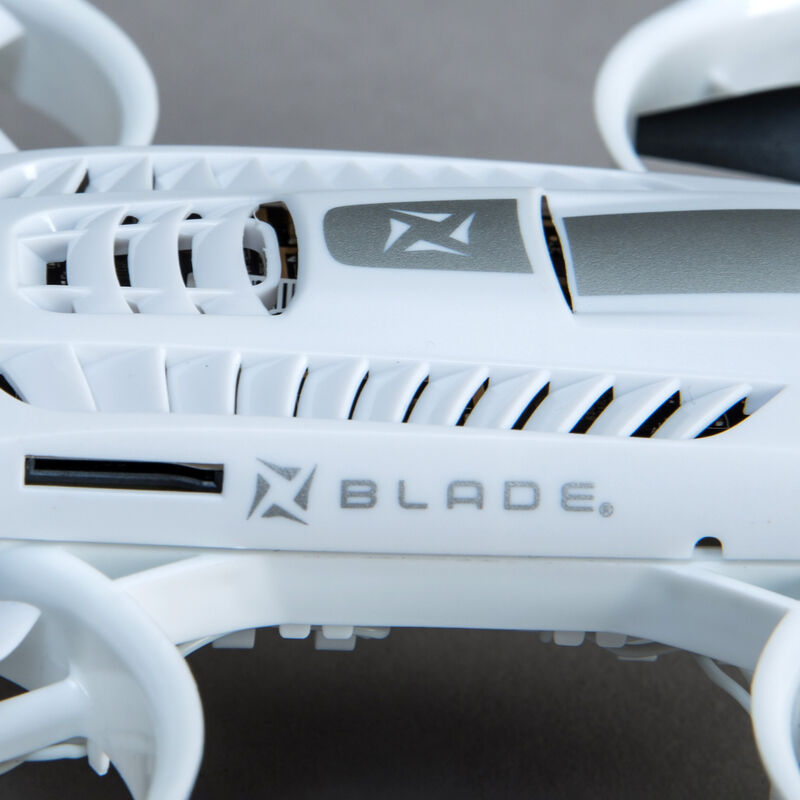 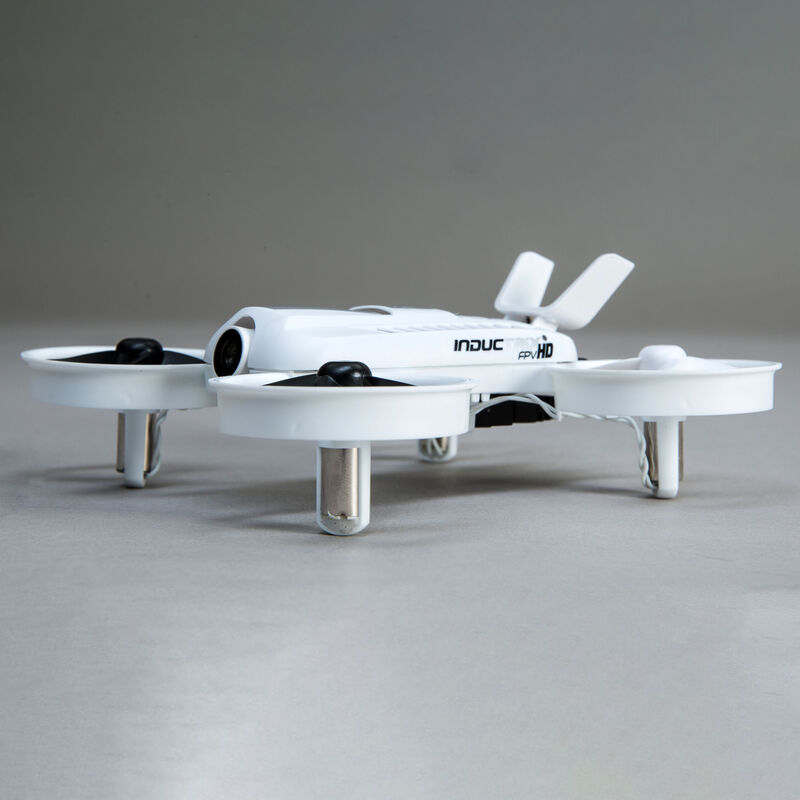 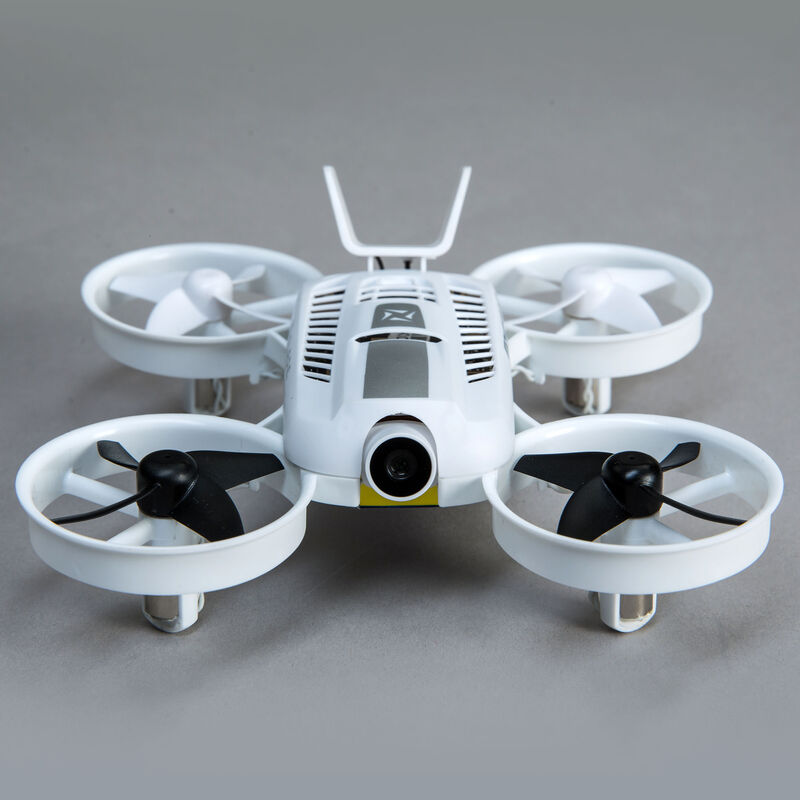 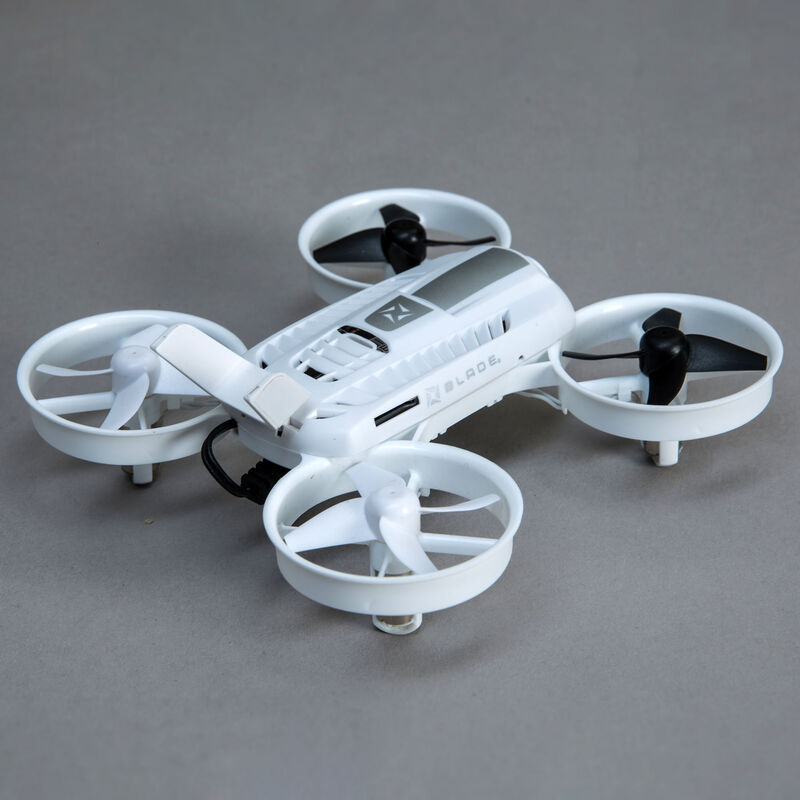 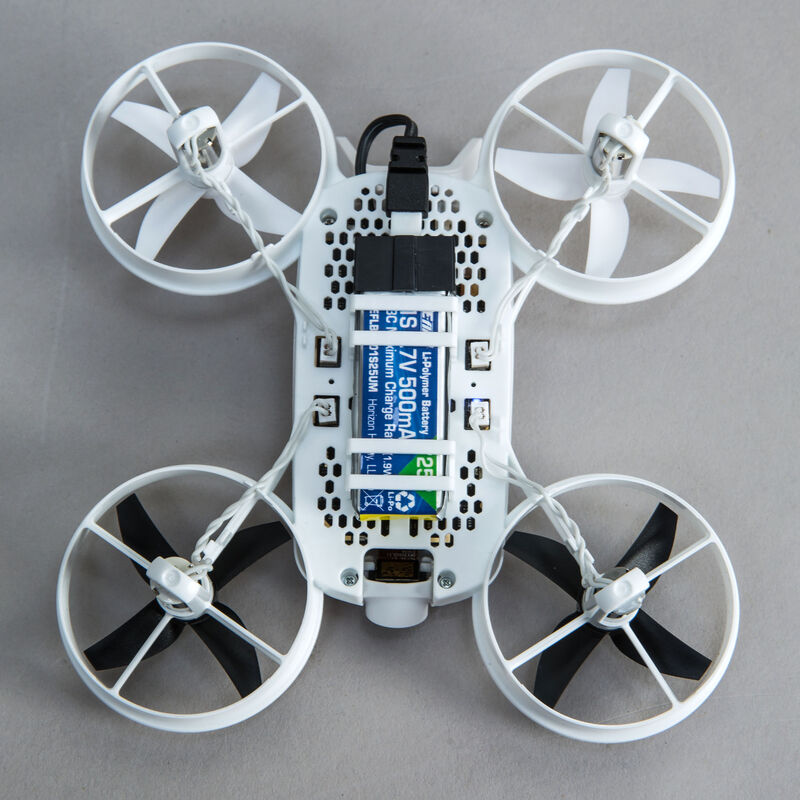 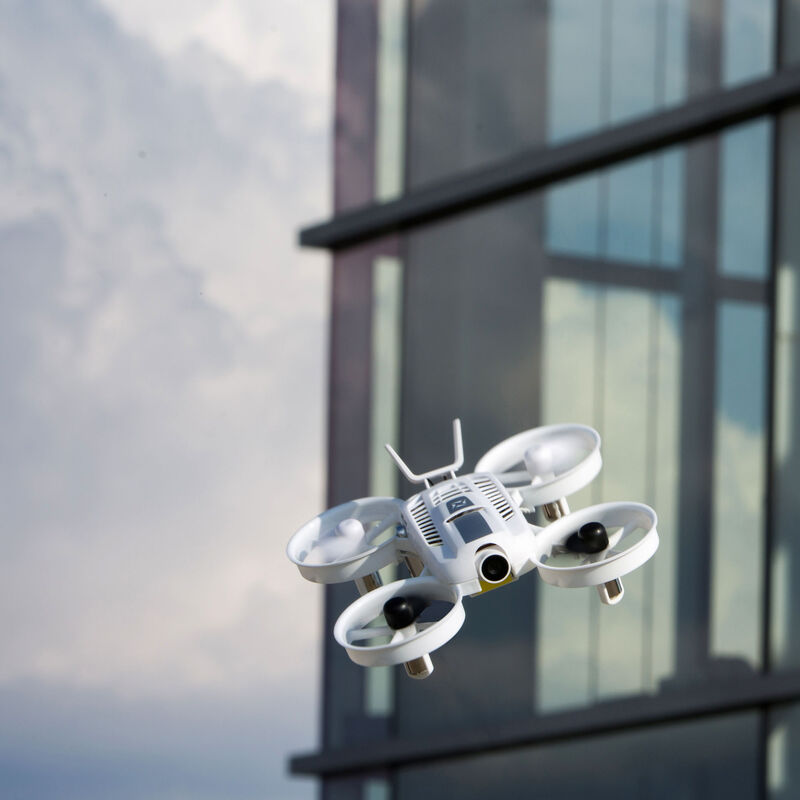 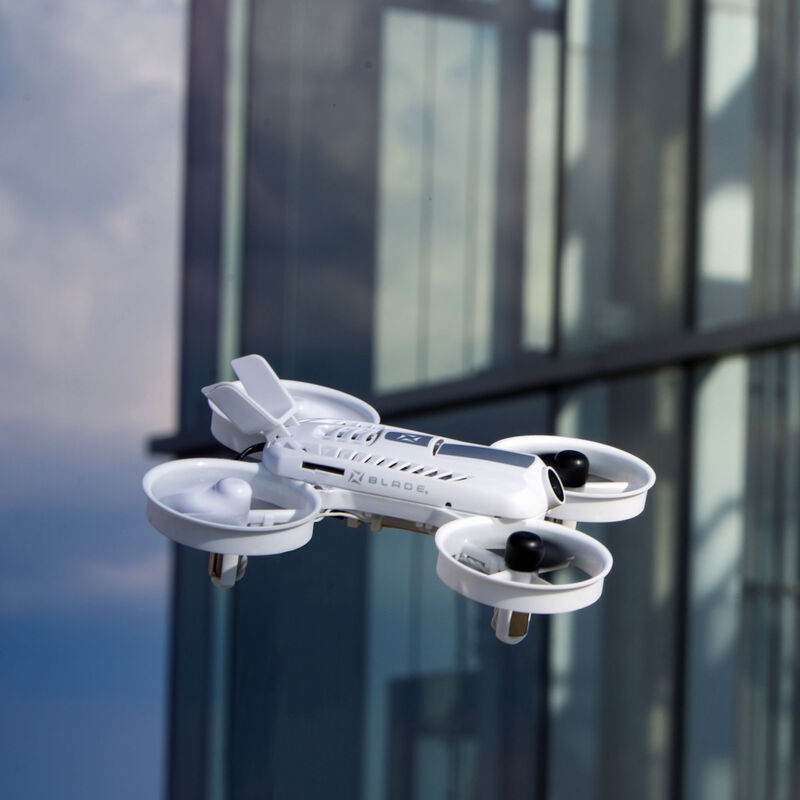 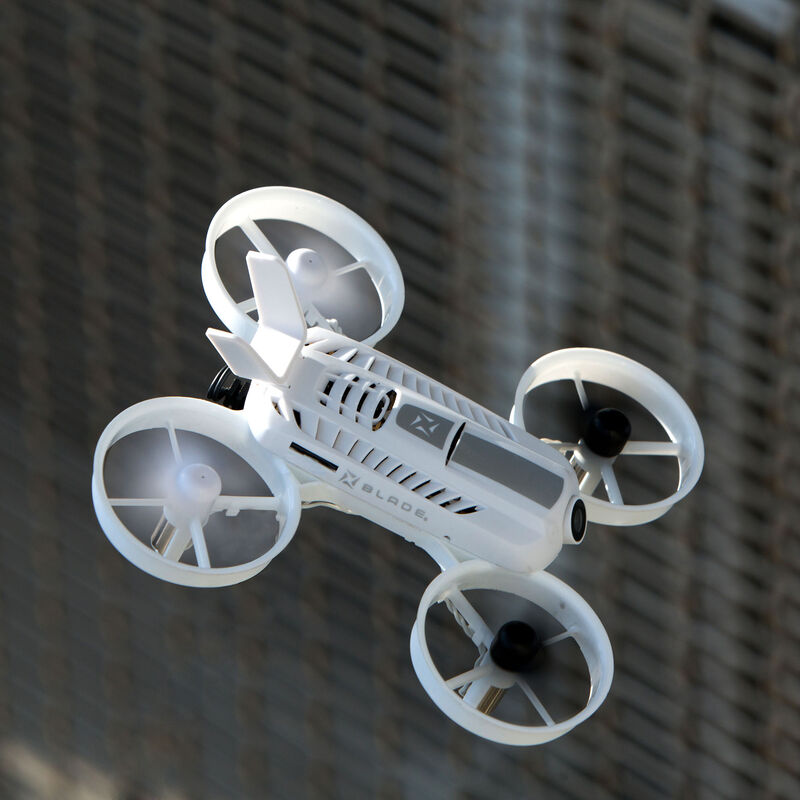 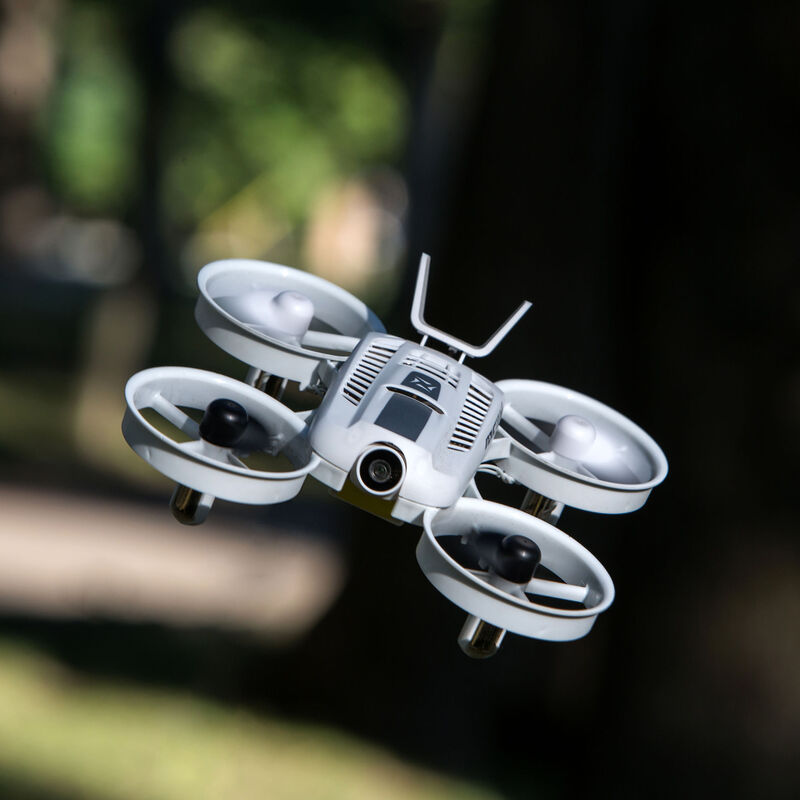 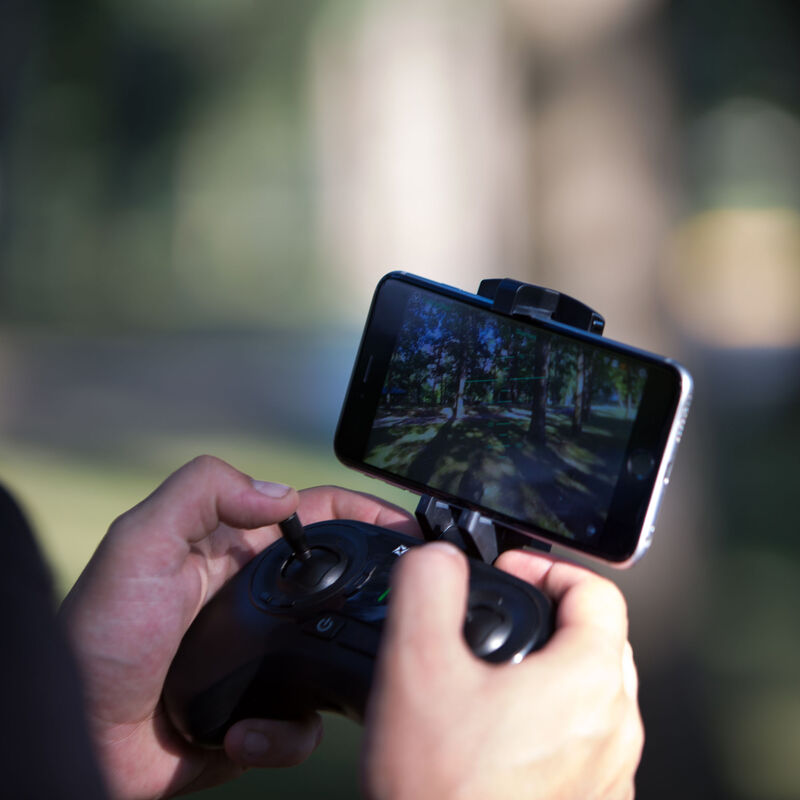 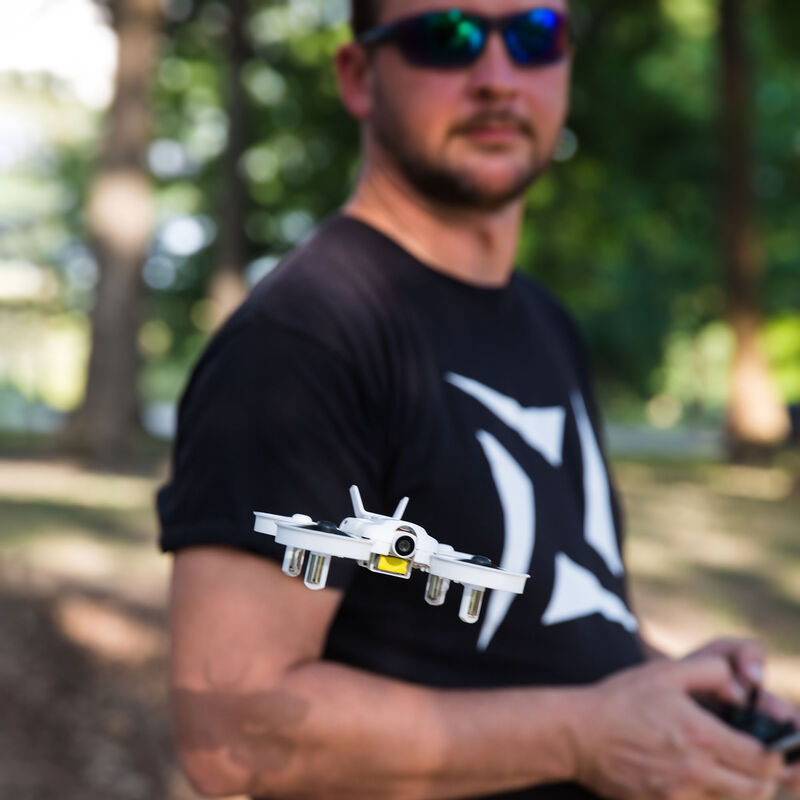 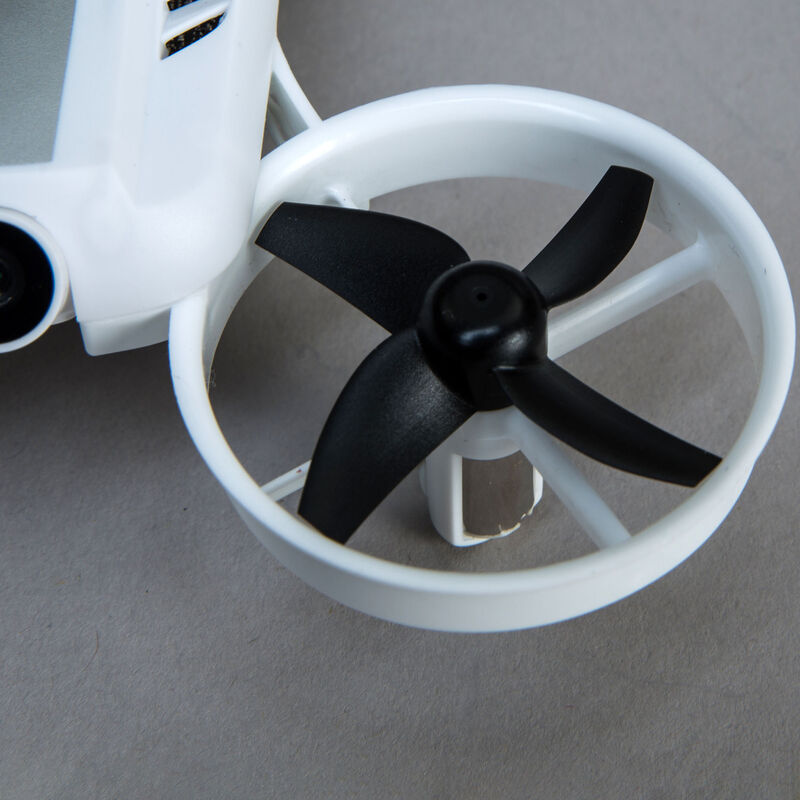 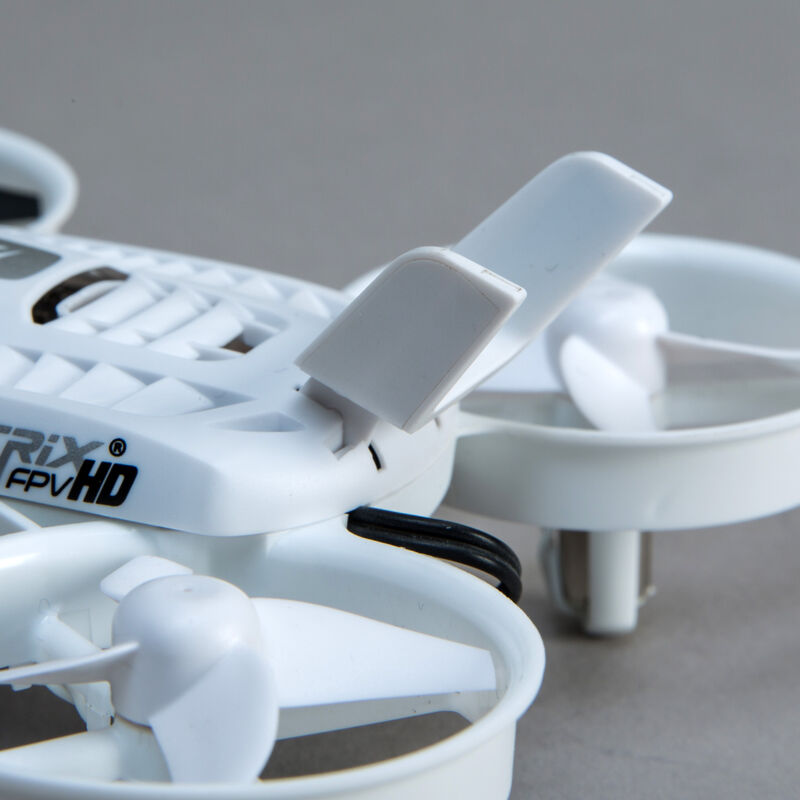 Item No. BLH9900
This Item is No Longer Available

The Inductrix™ FPV HD drone’s low-latency, high definition FPV camera uses an amplified WiFi signal to send beautifully immersive 720p live images straight to your Android or Apple smart device. Its included headset adapter has slots to hold your smart phone. Simply slide in your phone and it becomes your FPV goggles. Tailor the image you see to your preferences by adjusting the On Screen Display settings. On-board camera features include an SD memory card to record what your Inductrix™ FPV HD camera sees in brilliant, 1080p, 60fps video. Set the camera angle by adjusting its articulating mount — “up” for fast flying, “down” for when you’re ready to shoot exciting bird’s-eye scenes. The camera controls are tactile buttons conveniently located on the hand-held RC transmitter. That lets you take pictures and start or stop video recording without taking your eyes away from your FPV display screen. Wirelessly download HD footage straight to your cell phone, and share it proudly with the world on your social media pages.

The proven Inductrix™ drone platform makes flying as enjoyable for new pilots as it is for seasoned hobbyists. Four light, powerful brushed motors supply the oomph for snappy flights. The motors and propellers are mounted inside ducted fan style rotor housings, which help the durable frame bounce right back from ordinary impacts. But even during your very first flight, you’ll find it’s easy to keep control of your Inductrix™ FPV HD. That’s because innovative, sensor-assisted SAFE® technology gives it built-in stability. The drone can automatically maintain a chosen altitude; regain level flight on its own; and, if it lands upside-down, return to upright for another takeoff with just the push of a button. No worries...all fun!

The ready-to-fly Blade® Inductrix™ FPV HD comes complete with assembled drone, flight transmitter, flight battery, charger, and headset adapter. All you add is your smart phone — and you’ll be enjoying the aerial view in no time!

The Inductrix™ FPV HD camera’s low latency 720p video feed is complemented by 1080p 60fps on-board recording. Just add your smart phone for a full FPV experience — enjoying the live view from your drone’s perspective and recording it to share with friends. 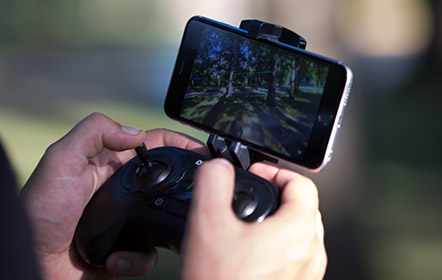 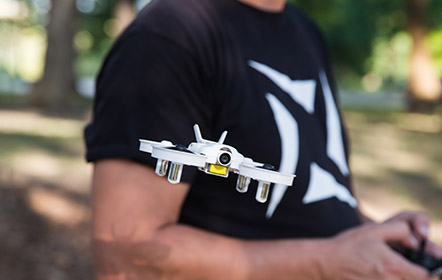 Everything you need to enjoy micro drone flight and FPV fun comes in one box. Simply add your smart phone for a thrilling HD FPV experience. 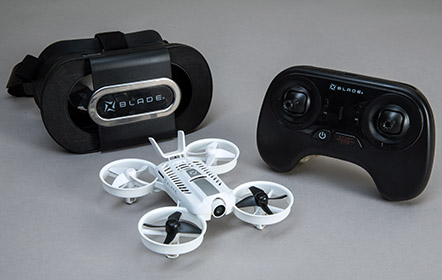 How lucky are we to get these amazing toys (RTF!) for a sale price of $99, or clearance for $69? Unbelievable.

Yes, one of the props flew off. A spot of glue fixed that!
Yes, the trim steps are short. So what!

I believe this device had its origins as the Yuneec HD Racer announced early last year. That little guy decked out in black and orange was quite an attractive craft and it seems like it was only in the stores for a minute (I swear I saw one at a Best Buy in Northern Virginia last year), but now it has been muted in white and grey and reintroduced as the Inductrix FPV HD. I was kind of disappointed to find a scarce few reviews and videos on the internet regarding EITHER craft and I was initially concerned that I may have purchased something akin to the dodo bird or a reasonable politician (sorry...sarcasm engine is still running), but I decided to push forward and see what the little quad could do.

Unboxing the product, I found everything to be packaged securely, the quad, controller and battery nestled under a protective plastic cover. Setup is rather standard: charging the battery took about 30-35 minutes, charging the controller took about the same. There is also an adapter that can take your cell phone and use it as an FPV headset. A toggle at the bottom of the FPV HD View app will effectively 'split' the screen making it easy to use with the headset adapter. I have not tried these yet, but I imagine they will be adequate for entry level FPV fliers such as myself.

My first encounter with the FPV HD View application left me a little concerned. I have two Android phones (Galaxy S8 running Android 8, Moto X4 running Android 9) and I found I could only get the FPV app fully working on the Galaxy phone...on the other phone the app would initialize but it would never connect to the quad and I never saw any video. I talked to HH tech support and they told me the app may not work properly on Android 9 (wha???) and no time frame was given for that correction. For the time being I can fly it with my Samsung phone but I am very concerned about longevity or losing FPV ability completely if Samsung ever pushes the Android 9 update to the phone. Just for the record, the app is NOT required to fly the quad, but if one of the primary motivators to have an FPV camera drone isn't working it does make you go 'hmmmm'. When working, there truly is rather low latency in the video transmission between the quad and the phone. The image is relatively clean @ 720p, and the videos are pretty fun. I like the virtual horizon that shows up in the app as it helps me determine whether I'm above or below any oncoming obstacles. I currently have a 4GB micro SD card in it, I believe it can take up to a 64GB card. Transferring video between the SD card and the phone is a little clunky, but once initiated the videos moved over relatively quickly. Obviously, the SD card can be removed and inserted into a computer as well, but I did not try that option as of the writing of this review.

The quad itself is rather sturdy and, thus far, has held up very well to the occasional wall or furniture bump or hard landing. I like the fact that when motors need to be changed (and they will because they are high-output brushed motors), the maintenance can all be done without having to open the airframe...all motors plug in underneath the aircraft. It think it will be sturdy in the long-run.

The controller is comfortable and easy to use, all buttons are intuitively placed and the sticks move rather smoothly through their range. I do not believe this controller can be swapped out for anything Spectrum related, there's a HH video that alludes to that. The controller allows the craft to be flown in 3 separate modes, with mode 1 being the 'SAFE' mode that limits control inputs and movements, and also incorporates some barometric altitude safeguards as well. That can be a bit of a challenge when trying to land the quad because SAFE wants to keep it a few inches off the ground, but I've figured out ways to gently force it through that level. In all modes I've found the quad to be pretty responsive, but unless you're an advanced flyer (or just want to go crazy!) I'd leave modes 2 and 3 for outside.

Flight time is about what you'd expect for a micro racer: 4-6 minutes with the included 1S 3.7v 550mAh battery. When the quad goes into LVC mode, it'll want to set down in just a few seconds. If you're flying FPV, there is a battery indicator on the interface to help you keep track of your remaining charge...quite handy!

I've only had the quad for 4 or 5 days and, quite frankly, toyed with the idea of returning it because of the Android app issue and the disconcerting 'quiet' in the hobby-verse about this aircraft. However, after some debate I have decided to keep this little guy because it gives me exactly what I wanted: stable, cheap, indoor quad copter fun. I have to admit I like the way it flies (again, recreational guy here). I've ordered additional batteries and plan to rip around the house and yard with it for (hopefully) many years to come, and I hope others will give it a try too. By way of disclaimer, I am not employed by Horizon Hobby or any of its subsidiaries and I received no special consideration for entering this review.
On Inductrix FPV HD RTF
share ' Share Review by Happydave1 on 26 Feb 2019 facebook facebook Share Review by Happydave1 on 26 Feb 2019 twitter twitter Share Review by Happydave1 on 26 Feb 2019 LinkedIn linkedin Share Review by Happydave1 on 26 Feb 2019
02/26/19
Was this review helpful? 1 0
S
Skyknight 3.0 star rating
08/25/19
Not what I expected
Review by Skyknight on 25 Aug 2019 review stating Not what I expected
I have been flying FPV drones for several years now. I expected more out of this one than it can give. The video quality is excellent but there is way to much video delay (latency) to actually fly FPV even in the Altitude Hold flight mode. Landing in the Altitude hold mode is more like falling out of the sky and switching out of that mode to have normal throttle control for s nornal landing is difficult.