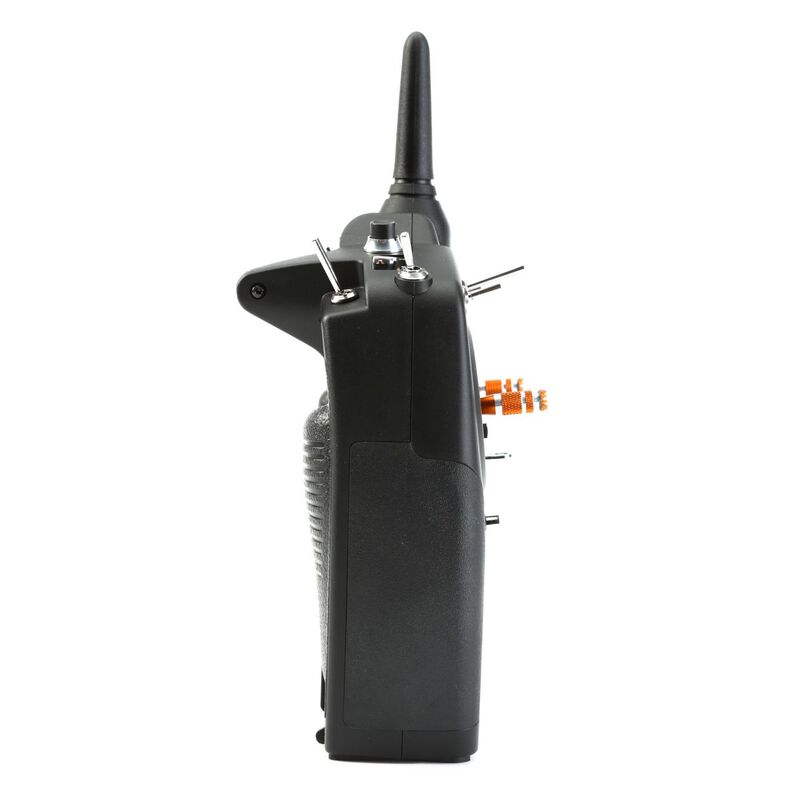 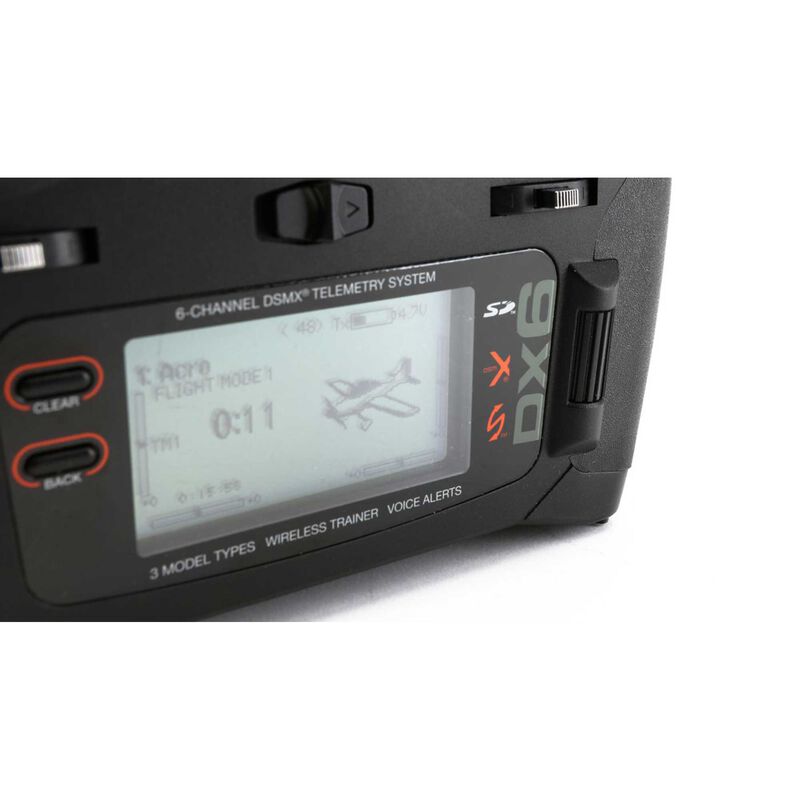 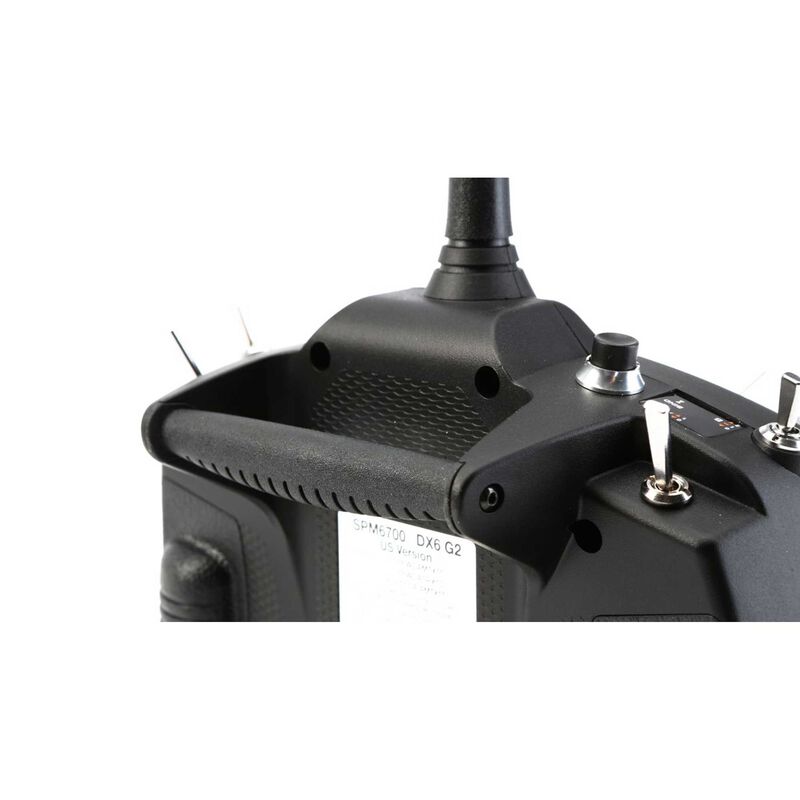 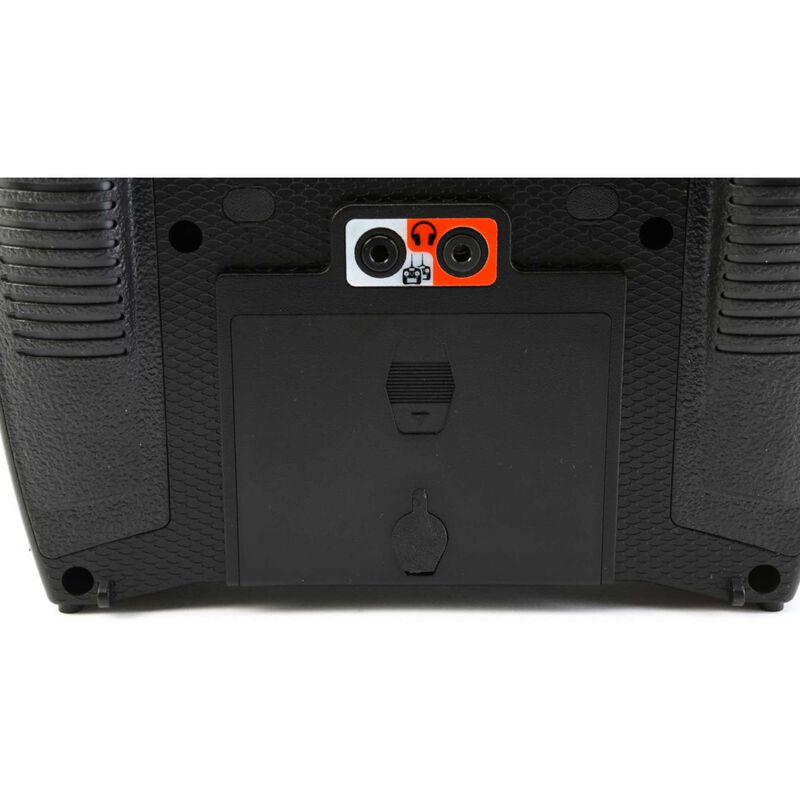 The programming you need with nothing you don't.

The DX6 has been designed from the ground up to deliver way more than you would ever expect from a 6-channel transmitter in its price range. Instead of having to content yourself with a handful of settings for a couple of model types, the remarkably affordable DX6 gives you an abundance of programming features for airplanes, helicopters and sailplanes. You also get other extras like voice alerts, a wireless trainer link and enough internal memory for up to 250 models.

With voice alerts, the DX6 will allow you to keep tabs on important functions without ever taking your eyes off what you’re flying. They can be programmed to call out what flight mode you’ve chosen or report telemetry information on demand. If an alarm goes off, you won’t have to look at the transmitter display to see what’s happening. The DX6 will tell you.

The wireless trainer link gives instructors the option to wirelessly "buddy box" with another DSM2®/DSMX® transmitter. Once bound to another transmitter, ModelMatch™ technology will allow the DX6 to re-link without having to go through the bind process again.

In addition to its extensive airplane and heli programming, the DX6 includes an impressive list of programming features for sailplanes as well. Five available flight modes, 4 wing types, 3 tail types, a flap-to-elevator curve mix – it has all this and more. The intuitive SimpleScroll™ programming interface makes all of these functions incredibly easy to access and use.

The enormous capacity of the DX6's on-board memory means you will rarely, if ever, need to juggle models between transmitter memory and your SD card. The model memory menu is easier to navigate too. Only memory slots with model settings saved to them will appear. You won't have to scroll through empty slots or move models around if one is deleted.

The DX6 is equipped with a built-in telemetry feature that gives you real-time information on things like your model's battery voltage, signal quality, engine or motor temperature, airspeed, altitude and more.*

Using the voice alert system, you can program the DX6 to tell you when specific telemetry values reach or exceed limits you define. You can also have it call out a sequence of telemetry values on demand with the flip of a switch. If you want to review telemetry after a flight, the DX6 can be set up to record the data to its SD card.

† DSM2 not available in EU.

Powered by
4.3 star rating 53 Reviews
1 Questions \ 1 Answers
ask a question
write a review
(34) (13) (0) (1) (5)
Show all reviews
ask a question
write a review
Thank you for posting a review!
We value your input. Share your review so everyone else can enjoy it too.
share
share
share
Thank you for posting a review!
Your review was sent successfully and is now waiting for our staff to publish it.
Thank you for posting a question!
Please click on the link in the confirmation email we just sent you to submit your question.
Your question will appear on the site once someone answers it.
write a review
ask a question
Updating Results
Verified Reviewer
0.0 star rating
09/25/20
Review by Anonymous User
On
share ' Share Review by Anonymous User facebook facebook Share Review by Anonymous User twitter twitter Share Review by Anonymous User LinkedIn linkedin Share Review by Anonymous User
09/25/20
Was this review helpful? 0 0
D
Dziadek 5.0 star rating
08/23/19
Excellent !!!!
Review by Dziadek on 23 Aug 2019 review stating Excellent !!!!
Has surpassed ALL my expectations Great value, I run it as a wireless mode and once I read the entire instruction Manual AND conferred with The Excellent Tech Staff, I was on my way to soloing with more expedience. and with less technical problems.
The humor around my Club is that I have been flying since 1959 and haven't soloed YET..
Of course the truth is that I got back into R.C. Last year and at 75 yrs old, it's never too late.
The learning curve fron GAS To ELECTRIC is at best difficult. But a gentleman in my Club
is 94, ( An Excellent Pilot ). Sooo I have time to learn and with the EXCELLENT help from Horizon Hobbies and great equipment, I WILL SUCCEED !!! CHET G.

But I got the DX 6 to prevent that... and do function checks now too. being able to program each of my planes into it is fantastic. I can set the dual rates... 3 levels on some planes... set flap levels and the like. I do use the voice function to help me remember what position the switch is in. It has so many functions and features that I haven't tried yet... but I'm sure that I'll get to others soon. Scrolling through the characters to name the plane can be lengthy, but it's only done once per plane, so it's not a big deal. The battery level indicator is nice. It has advised me when to change my batteries.

My brother is planning to step up to the DX 6 from the DX 6i just for the additional aircraft memory.

For planes requiring 6 channels or less this is the transmitter to have. There are a couple issues that I have though. The switch nuts come loose and finding a tool for them seems impossible. Horizon, if you are reading this, get some tools for them! I've made my own by filing on an old 8mm casing, but I'd like something more durable. The other issue is that one of my Tactic transmitters has a rotary switch that allows setting the flaps anywhere from 0 to 100 percent. Not necessary, but a nice feature.

My DX 6 has been the only transmitter that I have used since I bought it. I plan to try out other features soon, with an altimeter for the sail plane being the next feature that I plan to try.