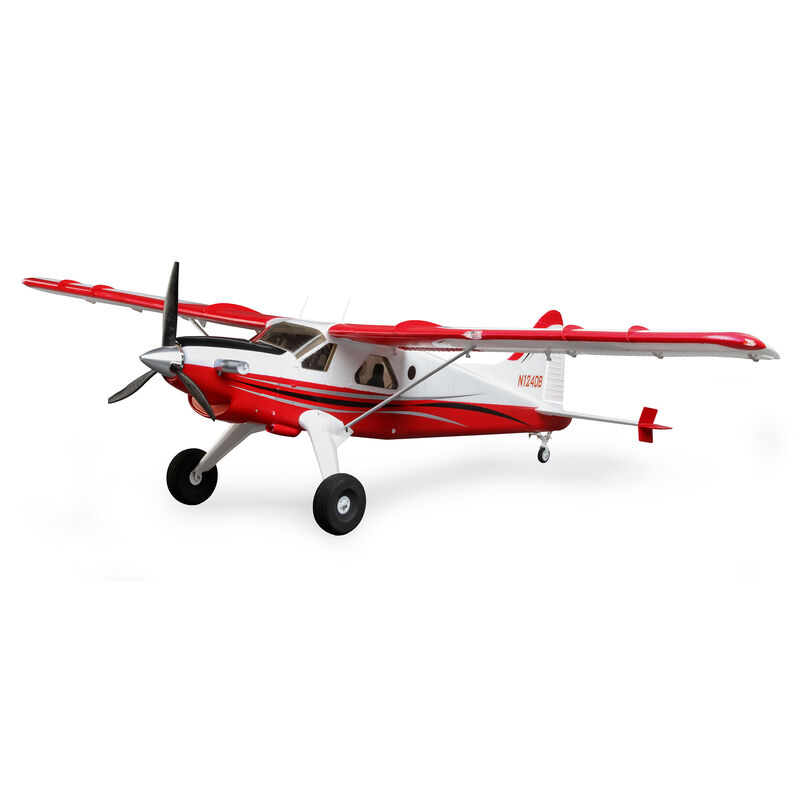 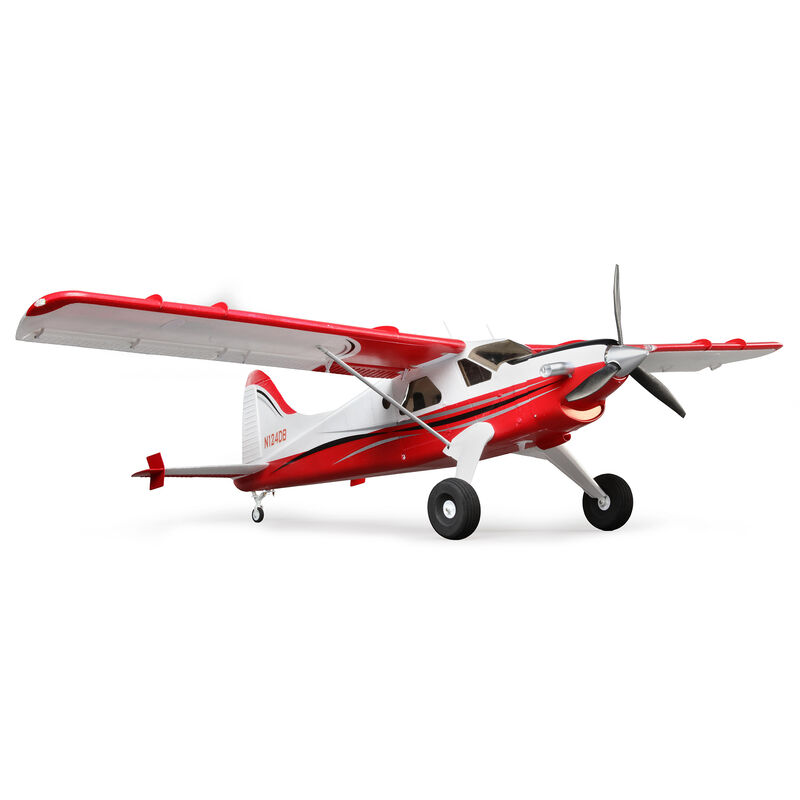 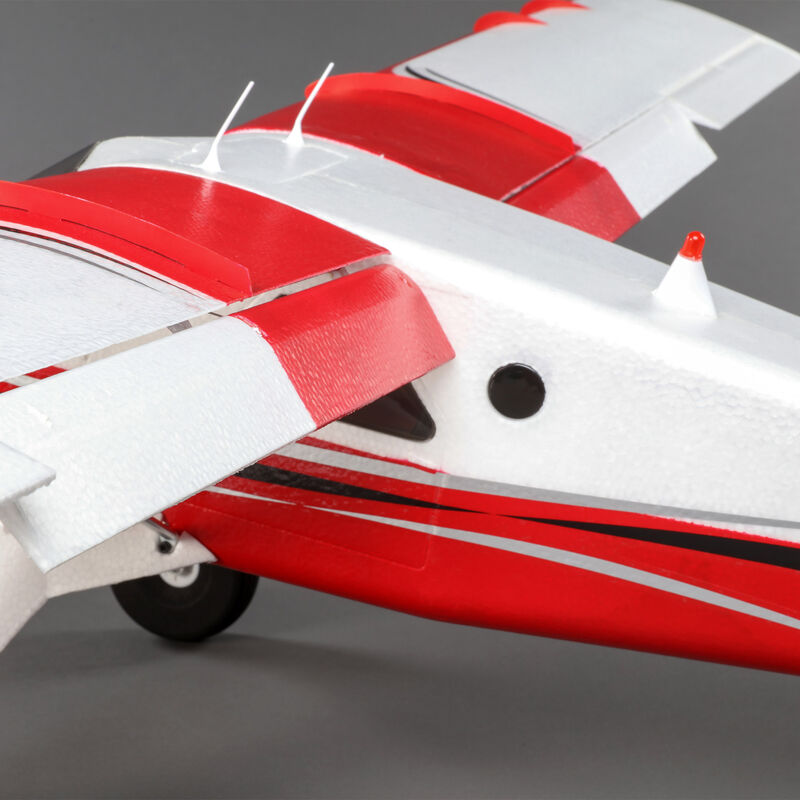 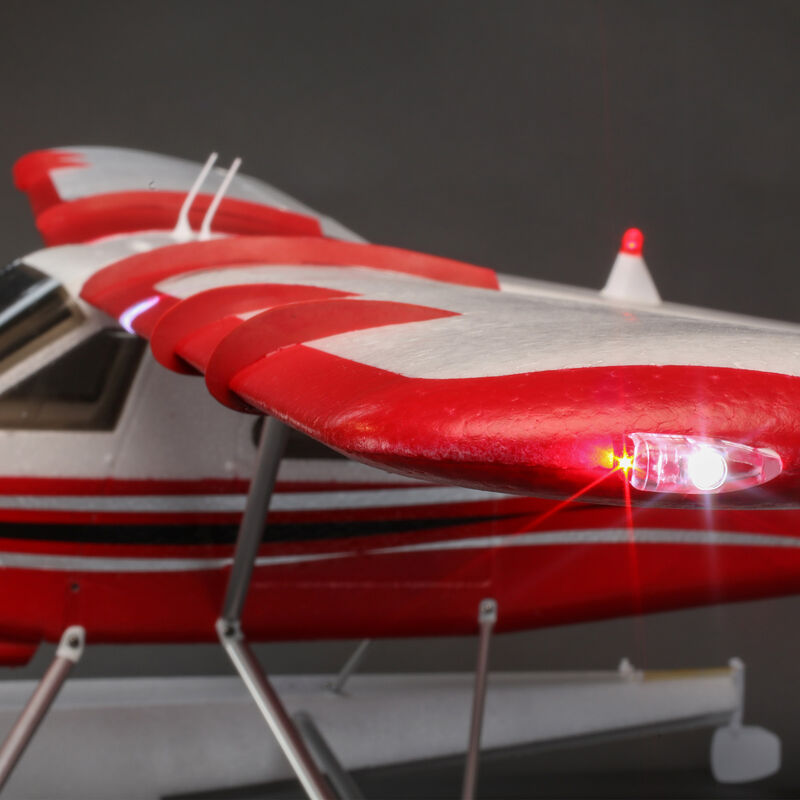 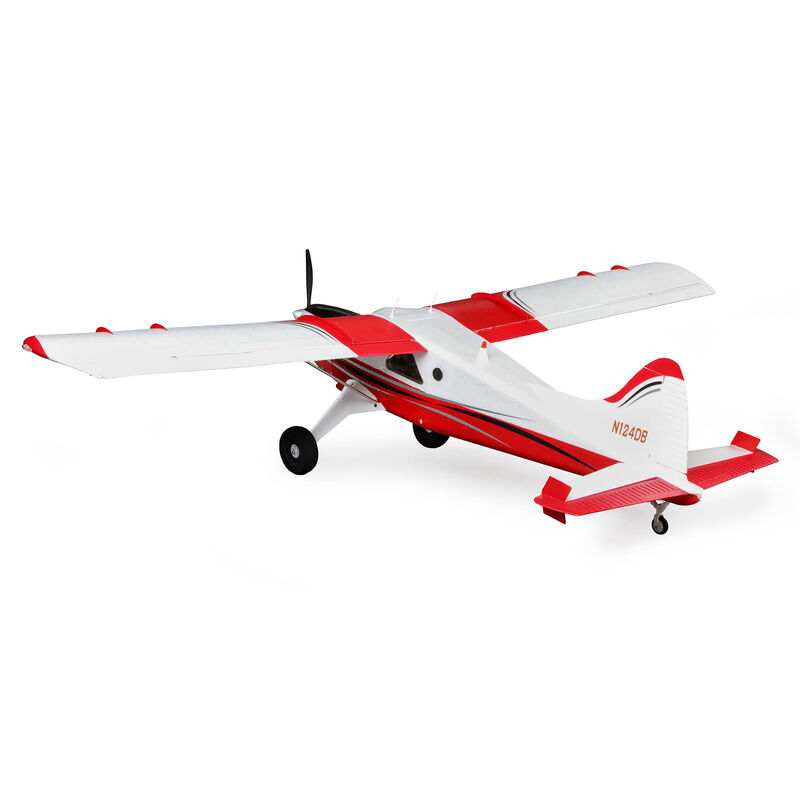 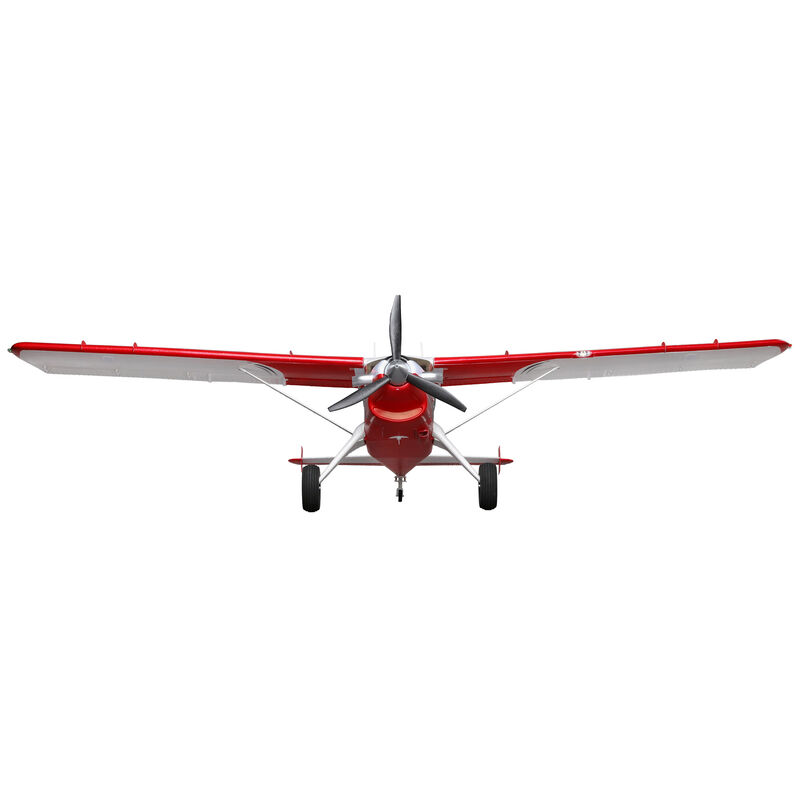 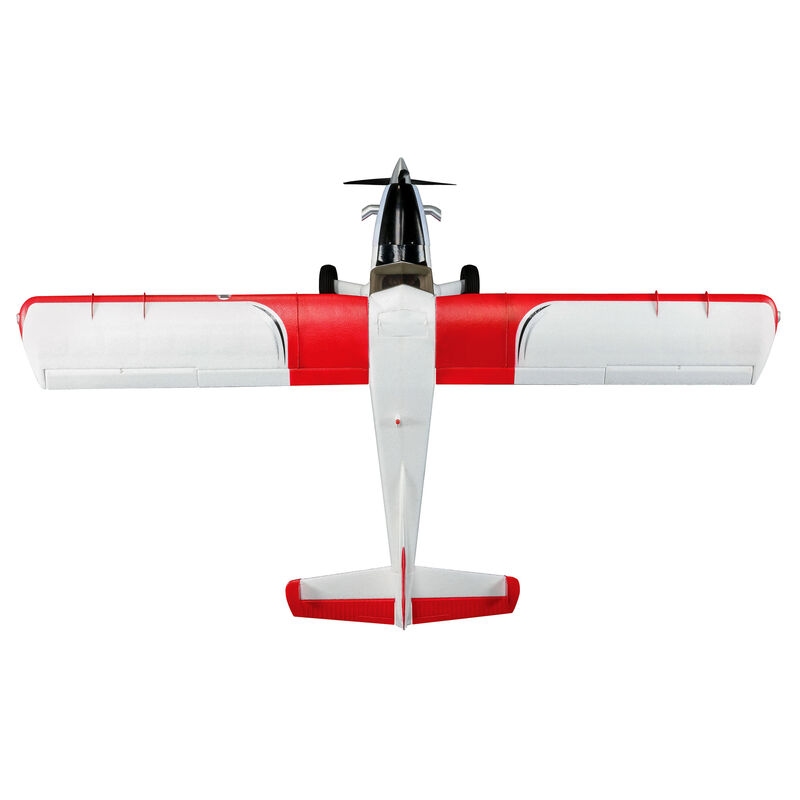 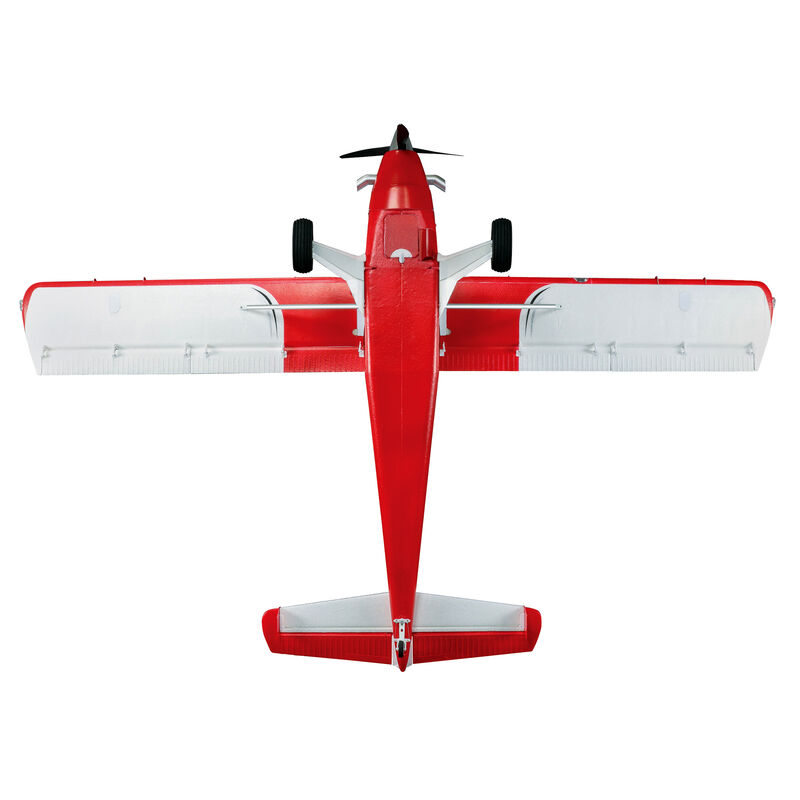 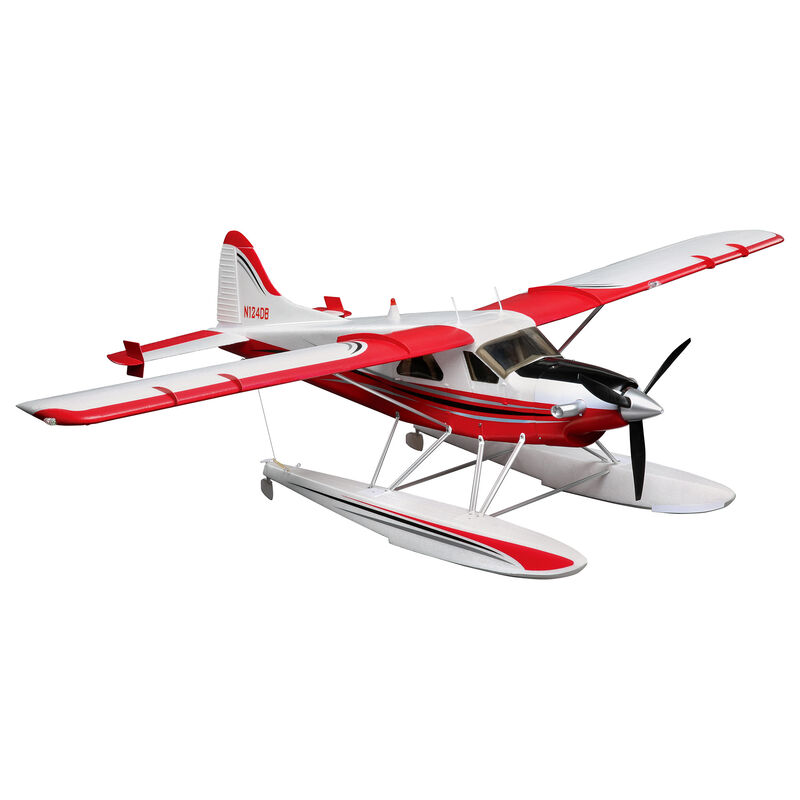 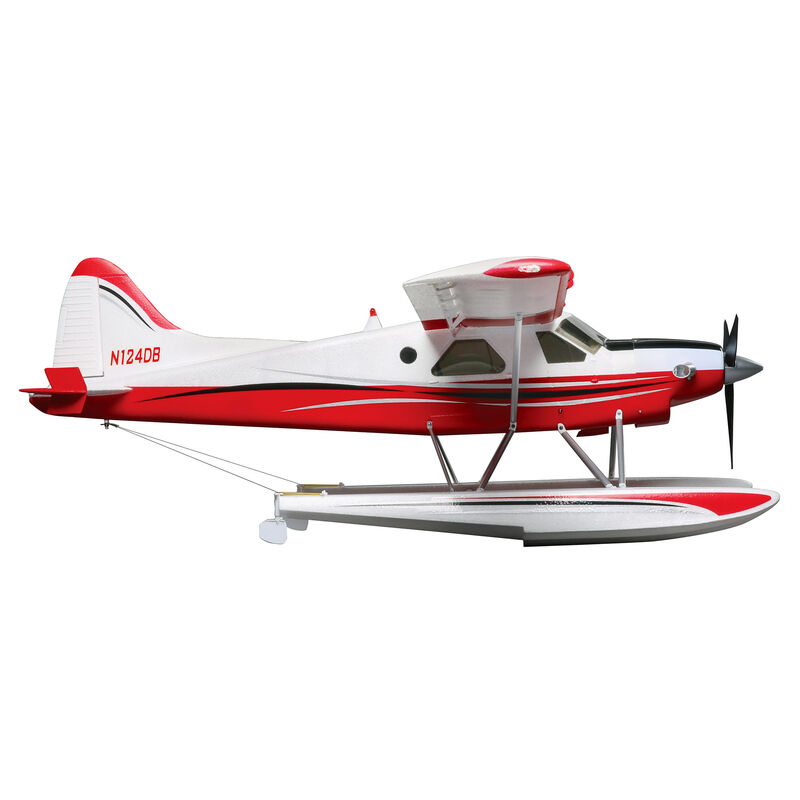 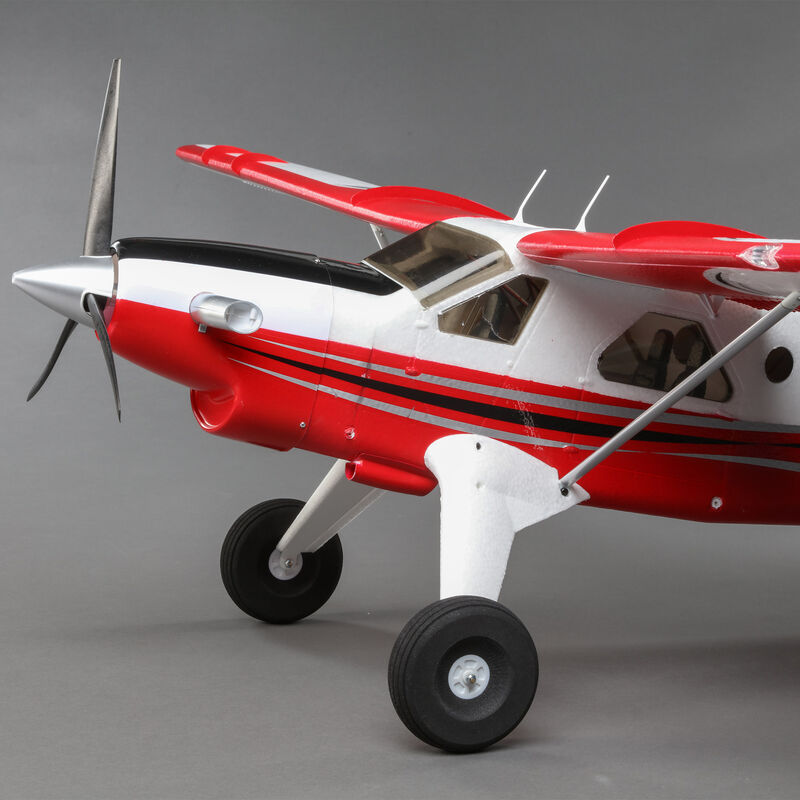 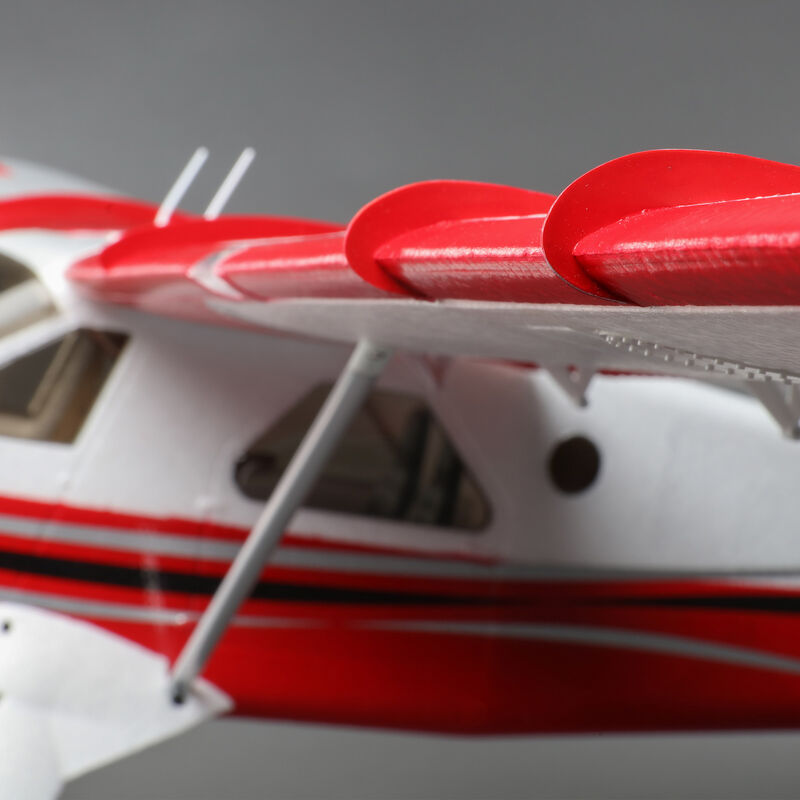 Item No. FLZA4034
This Item is No Longer Available

No other aircraft in the North American Territory has made greater community impact serving its pioneers than the De Havilland DHC-2 Beaver. Refurbished versions can be upgraded in many ways, including conversion to turbo-prop engine power. The Flyzone® DHC-2T Turbo Beaver 1.5m delivers a realistic looking model of the outback master with smooth running turbine engine power capable of speeding in and out of any terrain in the territory.

The Flyzone® DHC-2T Turbo Beaver 1.5m Rx-R is a scale replica of the legendary bush-plane equipped with the most popular STOL extras. Loaded with scale detail upon an authentic outline, from the well-appointed cockpit to the intricate surface features, you’ll be proud to show this model off. At the work bench, it’s a model that takes shape fast with assembly that’s basically a bolt-together process. Two-piece wings are a big part of this model’s convenience along with a completion level that includes a factory-installed power system and servos that are ready for your receiver and battery. The more powerful brushless motor and 3-blade prop deliver the performance punch that inspires bush pilots to take on all conditions and terrain, while operational flaps and built-in wing fences improve slow speed handling. And with the factory-installed LED navigation lights, you don’t have to stop the fun when the lighting gets low. Rugged aluminum landing gear equipped with large tundra-style wheels make it possible to fly from just about any airstrip. But if that’s not enough to excite you, you can also enjoy flying at a pond or lake by bolting on the included floats equipped with dual operational water rudders.

The more powerful brushless motor is equipped with a 3-blade propeller that works with popular 3S 1800-2200mAh LiPo batteries to deliver an abundance of thrust and beyond-scale performance.

Scale detail includes rivets, panel lines, surface corrugation, plus detents highlighting door panels and hatches found on the full-size aircraft. On the inside, the cockpit is impressively appointed with a simulated instrument panel, crew seating and clear windows. The outside delivers a sleek Turbo Beaver appearance that combines the classic tail shape with a sleek nose section featuring a three-blade scimitar-prop and large intake scoop all highlighted by a shimmering spinner and exhaust. 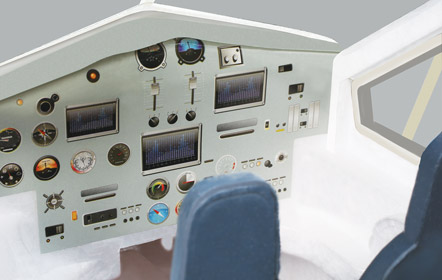 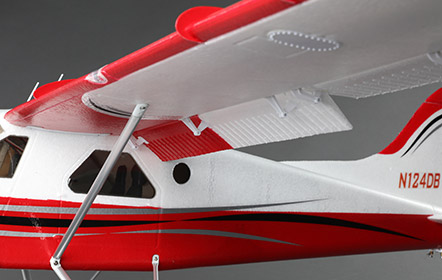 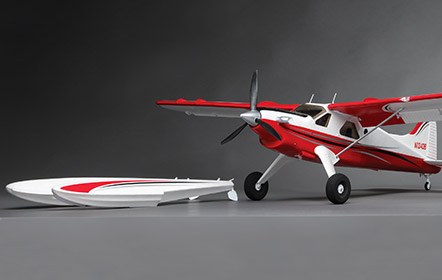 This Rx-R (PNP) model comes with the motor, ESC and servos installed. All you need to do is finish some final assembly, install a receiver, charge a battery and fly! 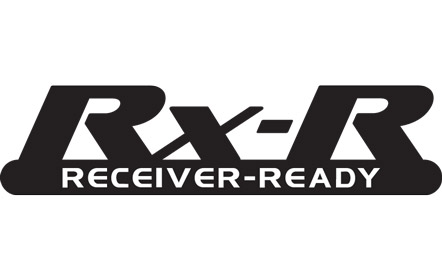 Takeoffs and landing are super simple, flaps are kind of useless as there is such limited travel. I purchased this as a first plane for lake flying and am happy with it so far.
On DHC-2T Turbo Beaver 1.5m Rx-R
share ' Share Review by Omarriott on 30 Oct 2018 facebook facebook Share Review by Omarriott on 30 Oct 2018 twitter twitter Share Review by Omarriott on 30 Oct 2018 LinkedIn linkedin Share Review by Omarriott on 30 Oct 2018
10/30/18
Was this review helpful? 0 0
M
Monofoilman 4.0 star rating
11/09/18
Some Cosmetic Issues, but Fun to Fly
Review by Monofoilman on 9 Nov 2018 review stating Some Cosmetic Issues, but Fun to Fly
The Turbo Beaver came nicely packaged to prevent parts damage. My first impression while unwrapping all the parts was that the molding was not as good as I have come to expect on foam models. There was lots of mold flash on the seams of the wing, tail surfaces and landing gear. Not a big deal to clean up, but an inconvenience. The fences on the top of the wing were all very &quot;wavy&quot;. They're thin sheet plastic and it seems as if they were glued into the slots haphazardly resulting in them not being straight. The front windscreen was only glued in a couple of spots and was very loose. The exhaust on the right side of the cowl fell off and upon removing the cowl to make a repair, it was apparent that it was not glued properly at the factory.

The manual could use some clarification to ease the assembly procedure. As another reviewer pointed out, it would have made more sense to adjust the elevator and rudder pushrods and tighten the EZ links on the servos BEFORE installing the wing, which limits access to the servos. The wing mounting seems overly complicated with the multiple carbon rods and the screw on attachment clips. I presume this was done to avoid having to figure a way to strengthen the front of the cabin area to allow a more standard bolt on wing arrangement. The cumbersome flap actuating wires made it tricky to mount the second wing half and the short arm on the single flap servo limits the flap deflection. A separate servo for each flap would be a better arrangement.

The rest of the assembly procedure was fairly straightforward and the screws and other small parts were bagged separately and easy to identify. The oval aluminum struts for the wings and floats were nicely done and seem to be very strong. My only issue with the floats is that they are soft foam on the bottom and will likely be easy to damage. A vac formed shield on the float bottoms would be a simple solution and a welcome addition.

The AR620 receiver that was mailed separately was easy to bind and install, though the space is a bit tight in the under cowl compartment. The provided hook and loop fasteners for attaching the battery was useless due to poor adhesion--the double sided tape easily peeled off both the hook and loop parts. The battery is a tight fit in the compartment and the extended molding on the bottom of the hatch is hard to maneuver around the wires when trying to close the hatch. It's also inconvenient to have to stand the model on it's nose to access the battery compartment. The plastic antennas on the hatch atop the wing will probably break off it the model is allowed to rest upside down.

As far as flying goes, the model is very stable and easy to fly. Use of the rudder for coordinated turns is a must and the model is capable of most standard aerobatics. Flaps are not necessary for take offs and landings, but using the flaps on landing allows the model to slow down quite a bit and is fun once you are used to them. The underside of the vertical stabilizer had a couple of steel blocks glued on to allow the model to balance correctly. On the first flight, very little trim was needed and with the model at a safe altitude, the throttle was cut and up elevator was gradually applied to test the stall behavior which was very mild with no tendency to fall off to either side. The model will spin and recover with no trouble. All in all, a fun model to fly.
On DHC-2T Turbo Beaver 1.5m Rx-R
share ' Share Review by Monofoilman on 9 Nov 2018 facebook facebook Share Review by Monofoilman on 9 Nov 2018 twitter twitter Share Review by Monofoilman on 9 Nov 2018 LinkedIn linkedin Share Review by Monofoilman on 9 Nov 2018
11/09/18
Was this review helpful? 0 0
H
Hbd2 S. 4.0 star rating
10/28/18
The DCH-2T vs the DHC-2
Review by Hbd2 S. on 28 Oct 2018 review stating The DCH-2T vs the DHC-2
The Flyzone DHC-2T Turbo Beaver is mainly a cosmetic remake of their DHC-2 Beaver. One of the most mentioned complaints of the -2 was the grade of screws used in assembly, causing them to strip or break. The -2T has a much better grade of steel screws. Having assembled both, I'll share some of the differences. First out of the box is the manual, while basically a make-over, the -2 was printed on glossy paper and the -2T is printed on regular 20# white paper. This makes the-2T images not quite as clear, especially the closer-up ones. If you are using the Spektrum DX8-G2 transmitter, set all servos to reverse except ch.1, throttle. In some areas the -2T manual has improved on the explanations except in the following sequence of assembly. On page 9 when you have completed step 5, DO NOT mount the wings. Jump over to page 15 and perform steps 1 through 6. If you assemble the wings first, you will find it extremely difficult to access the servos. Now return to page 9 and continue with the wing mounting.
The DHC-2Ts wingspan and area is the same as the DHC-2, the fuselage is 2” (49mm) longer due to the turboprop cowling, weight is ~1oz. (24gm) more, as is the wing loading. The -2T's motor has a 70kva rating more than the -2, but they could be interchanged. The -2T uses a 3 blade 11-7.5 prop, and the -2 used a 2 blade 12-6. They will produce about the same thrust at the same rpm, however a 2 blade is slightly more efficient while a 3 blade will produce a slightly less P-factor.
One point of dissension in both versions is the design of the flaps' control, which is horrendous. For the simple addition of one servo (one in each wing for each flap), this would be greatly improved, and the manufacturers cost for this could not be more than a couple of bucks. While we're discussing this, the very short servo arm on the single centered flap servo will only give about 10* of flaps. I replace this with a longer arm (it has to be a single arm, cut the unused ones off), and I set it to give me about 45* of down flaps. With my DX8 transmitter, I program it to a 3 position switch for up, half, and full flaps. I also program for a slow speed of 8 to 10, which allows the plane (and me) to settle in as the flaps are changing position.
Finally, I balanced my DCH-2T for a slight negative angle of attack at 2.25” (57mm) aft of the leading edge of the wing where it attaches to the fuselage. This took 1 oz. (28.35 gr.) attached to the fuselage immediately ahead of the elevator hinge line. Paint the weights red to be less obvious.
Happy Landings.
Skipper Delius, AMA19276
On DHC-2T Turbo Beaver 1.5m Rx-R
share ' Share Review by Hbd2 S. on 28 Oct 2018 facebook facebook Share Review by Hbd2 S. on 28 Oct 2018 twitter twitter Share Review by Hbd2 S. on 28 Oct 2018 LinkedIn linkedin Share Review by Hbd2 S. on 28 Oct 2018
10/28/18
Was this review helpful? 0 0