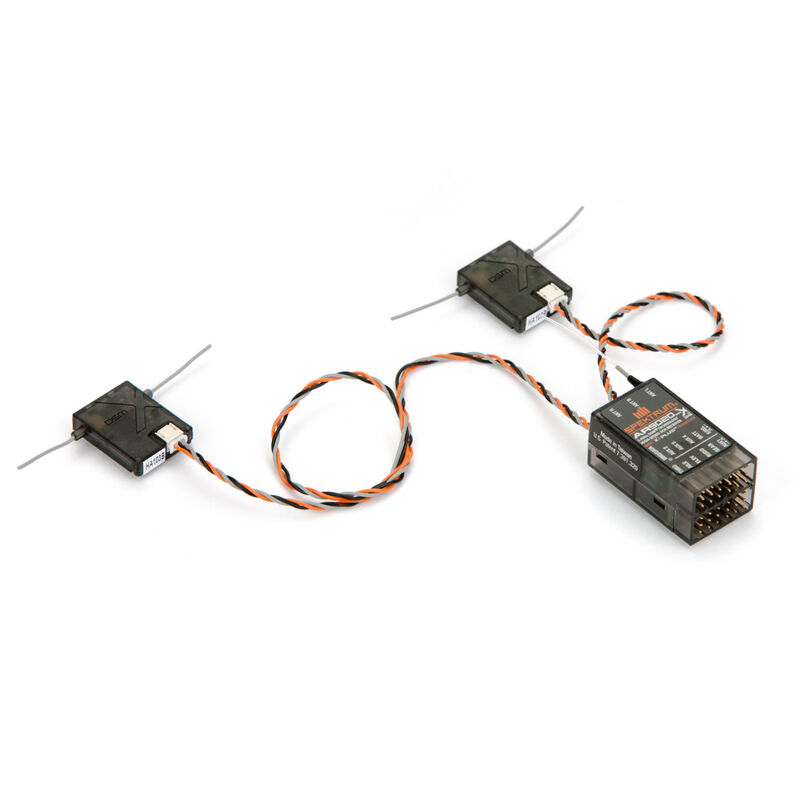 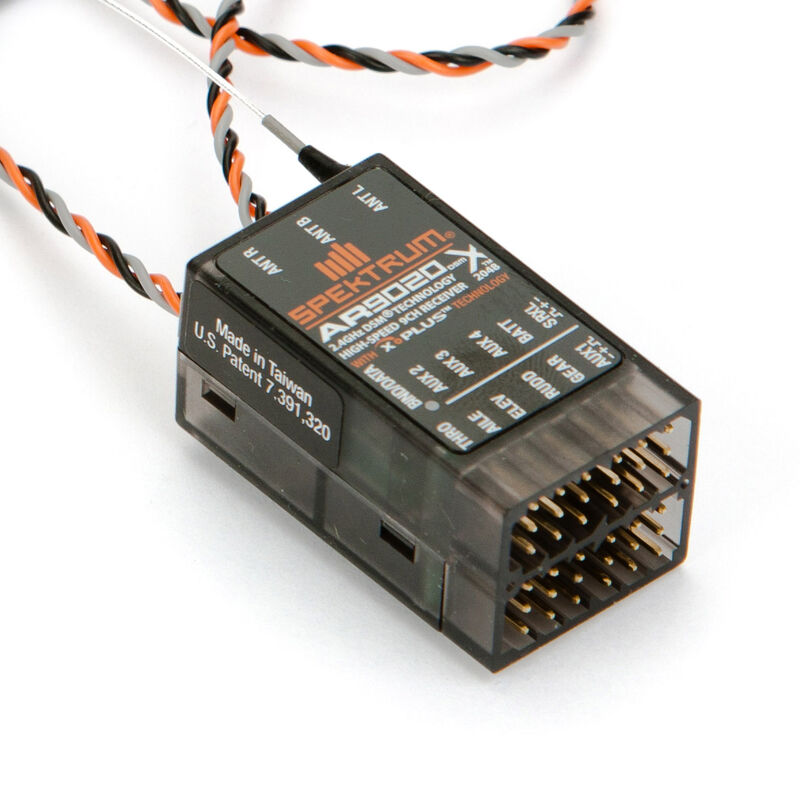 Item No. SPMAR9020
This item is no longer available. Updated or related products shown below:

The Spektrum™ AR9020 is a 9-channel DSMX® receiver that gives you the option of adding extra channels simply by plugging a Spektrum X-Plus8 channel expander into its SRXL port. This makes it ideal for scale modelers who like to push realism to the extreme with working accessories and lights, in addition to regular control functions. The AR9020 also includes two small, remote receivers that let you take advantage of patented Spektrum MultiLink™ technology. The remote receivers allow the AR9020 to “see around” conductive materials in the model and maintain a solid signal in any attitude.

IMPORTANT: Not for use in airplanes that have full carbon fuselages OR that have significant carbon or conductive structures. We recommend using either the AR6255 or AR9300/AR9310 receivers for carbon fuselage applications.

NOTICE: The AR9020 receiver is not compatible with the Spektrum DX6 park flyer transmitter.

Powered by
4.6 star rating 8 Reviews
0 Questions \ 0 Answers
ask a question
write a review
(6) (1) (1) (0) (0)
Show all reviews
ask a question
write a review
Thank you for posting a review!
We value your input. Share your review so everyone else can enjoy it too.
share
share
share
Thank you for posting a review!
Your review was sent successfully and is now waiting for our staff to publish it.
Thank you for posting a question!
Please click on the link in the confirmation email we just sent you to submit your question.
Your question will appear on the site once someone answers it.
write a review
ask a question
Updating Results
Verified Reviewer
0.0 star rating
10/26/20
Review by Anonymous User
On
share ' Share Review by Anonymous User facebook facebook Share Review by Anonymous User twitter twitter Share Review by Anonymous User LinkedIn linkedin Share Review by Anonymous User
10/26/20
Was this review helpful? 0 0
C
Cta234 5.0 star rating
01/28/16
9020 receiver
Review by Cta234 on 28 Jan 2016 review stating 9020 receiver
A receiver is a rather benign and passive device from a user's perspective. It's not like a transmitter where there could be much to write about. For a receiver, it either processes signals properly or it doesn't (and we crash). Thus, there would seem to be little incentive to write comments on a device with no buttons or levers to brag about. However, in this case I feel somewhat compelled to share my experience with the 9020.

I have this receiver in an Electrifly Sequence F3A (this plane is no longer available). It is paired with a 1st generation DX18 transmitter. In the 1341 flights I have had to date (as of Jan. 28, 2016) with this plane and radio system, over three years in many pattern contests (Sportsman so far) and fun-flys and all kinds of weather (up to 18 mph cross wind), I have not experienced one single radio failure or interference effect.

This is one awesome receiver!