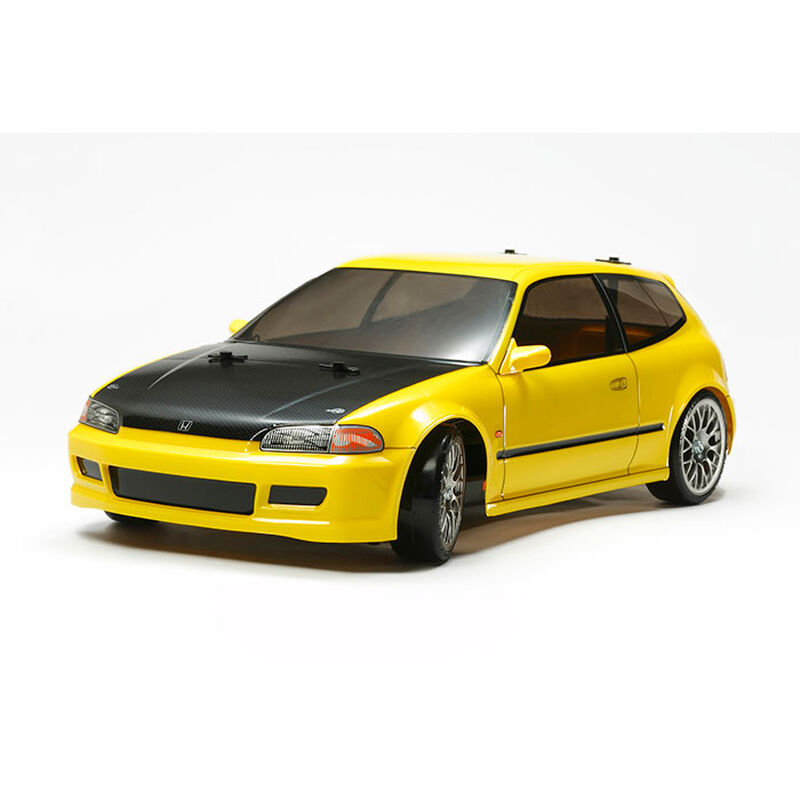 This exciting drift spec TT-02 assembly kit recreates the Honda Civic SiR (EG6). The EG was known as the "Sport Civic" in Japan, and was the fifth generation of the famous car. It had a vibrant look, said-to-be inspired by the famous Brazilian carnival atmosphere. The Civic had a 170hp inline-4 DOHC VTEC engine under the bonnet of the top-spec SiR hatchback, which made for plenty of power at the time. The car was a regular sight in Japanese and international racing competitions.

The Porsche 934 was introduced for the 1976 racing season for the European GT Championship and U.S. Trans Am racing series. It was manufactured for two years, 1976 and 1977, with at least 400 being manufactured to meet homologation regulations of Group 4 GT class cars.

The Turbo RSR Type 934s as well as the 935 were raced in the Deutsche Rennsport Meisterschaft, the predecessor racing series to DTM, in a distinctive vivid orange "Jägermeister" livery, which was field by the Max Moritz Team.

The 934 was based upon the 930 Turbo. Fitted with a large turbocharger, a water-cooled intercooler, and K-Jetronic mechanical fuel injection system, the flat-6 engine was under the horizontally-positioned cooling fan in the same way as seen in the 917 and 908, for optimum cooling effect. Thanks to such modifications, the engine's power was boosted from 260hp to 485hp and at the same time its torque was nearly doubled from 35kgm to 62kgm. The car also featured independent torsion bar suspension with resin bushings and coil springs, adjustable front and rear stabilizer rods, and ventilated disc brakes with aluminum calipers. The sleek body featured flared fenders and a large front spoiler with air intakes for the oil cooler in the center, intercooler radiators on the left and right, and rounded brake cooling air intakes.