In electric aircraft, propellers are turned by a motor powered by a rechargeable lithium polymer (LiPo) battery pack. An electronic speed control (ESC) regulates the motors output for throttle control. The motor, battery, and ESC are all installed onboard the model. The first electric RC models were equipped with brushed motors — in which brushes carry current and spin the rotor — and nickel-cadmium (NiCd) rechargeable battery packs. They provided flight times of around 5-10 minutes.

A glow engine plane of similar weight and power, however, would allow nearly double that flight time when fully fueled. Electric systems have now been developed that take advantage of brushless motor technology for much better efficiency, power, and flight time.

In a brushless system, the ESC energizes the motor's electro-magnetic field, and that causes the motor to turn. Compared to brushed motors, there's less friction, waste heat, and wear. Brushed motors are only about 35-40% power-efficient and will wear out over time whereas brushless motors improve that to 80-90% and can run for hundreds even thousands of flights. You will still find brushed motors around, but they are typically used in very small airplanes and helicopters. The recent improvements in motor technology are only part of the story behind electric models' surging popularity.

Rechargeable battery technology has made enormous forward leaps, too. First, the higher-capacity nickel-metal hydride (NiMH) battery chemistry appeared as an alternative to NiCds. Performance and flight times improved. NiMH performance was soon surpassed by LiPo batteries which are now the hobby’s standard. With LiPo batteries and brushless motors, electric planes have the power and performance capability that can match — even exceed — that of that of gas/glow engines!

You'll find electric options for everything from trainer planes and park flyers to scale giants. Today's brushless electric power systems even provide enough pinpoint control and instantaneous, all-out power for jaw-dropping 3D aerobatics! Of course, the Horizon Hobby web site gives specific completion item recommendations on the aircraft product page (an excellent resource for anyone new to RC flying). When you decide to select a motor on your own, you'll notice that the motor requirement is indicated by a "kV" number, such as "800kV". That number indicates the power output, expressed as rpm per volt of input. Running an 800kV motor using 6V of input means that the motor will turn at 4800 rpm.

Brushless motors include that kV number in their product names, preceded by two other numbers (e.g. "42-50-800kV"). The first is the motor’s can diameter in millimeters; the second is its length in millimeters. Match the motor size that your model will accept with the power output required, and you've made an appropriate choice for your plane. Many manufacturers now list their motors as equivalents to their glow/nitro counterparts (e.g. .10, .46, 1.20) along with the above numbers.

Depending on the airplane, you may be advised to buy an "inrunner" or an "outrunner" brushless motor. What's the difference? Inrunner motors are the type in which the motor can is stationary and the shaft spins inside. The motor can is longer and thinner, allowing higher rpm and making them better for ducted fan planes, racing planes, and planes with thin noses. Some applications might require pairing the inrunner motor with a gear drive, which adds to the cost and installation effort. As the name implies, "outrunners" work the opposite of inrunners. In this case, the shaft is fixed and the can spins can spins around it. An immediate benefit of this style in RC use is that they can turn larger, more efficient propellers without needing gearboxes. That makes them a simpler, lighter weight, less expensive power option suitable for all sizes and styles of aircraft. 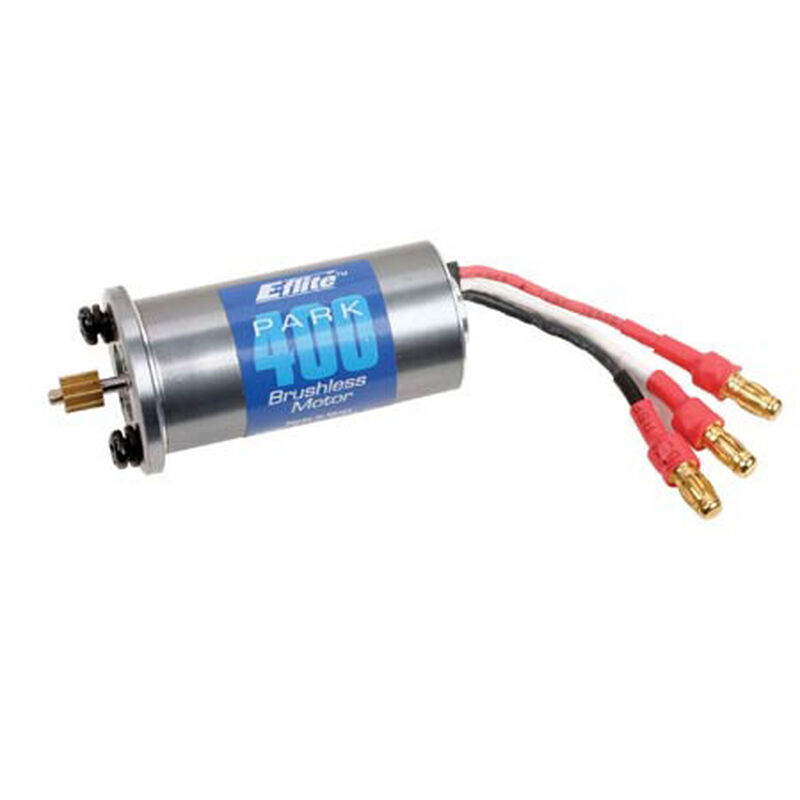