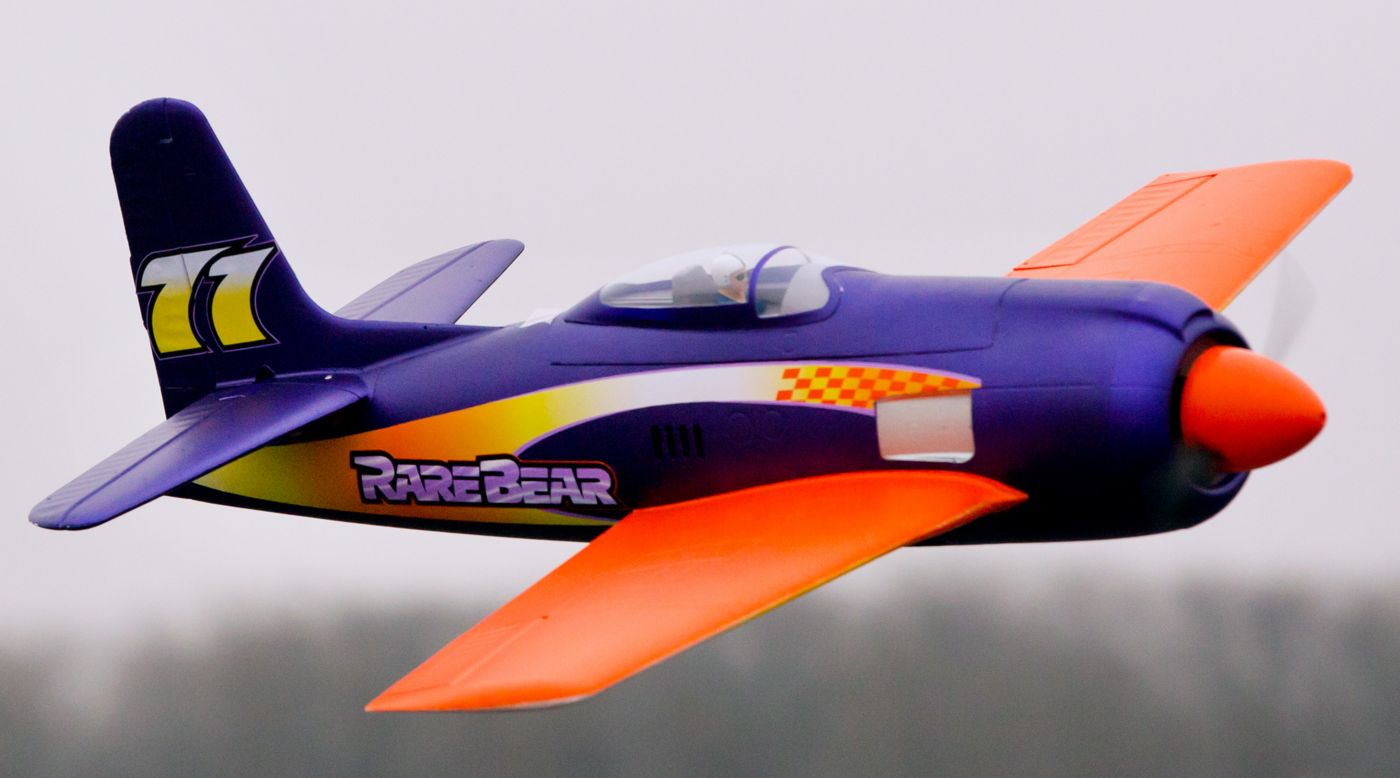 What began in 1969 as a derelict wreck currently holds the straight-line speed record for piston-engine aircraft at 528.3 miles per hour. At 500 pounds lighter and 1000 horsepower stronger than a stock Grumman F8F-2 Bearcat, Race #77 is the crown jewel of the Lewis Air Legends collection. To this day, Rare Bear is a favorite to all except the competition.

The E-flite® Rare Bear radio control airplane delivers an exhilarating flight experience capable of 100+ MPH*, right out of the box. Like the full-size, this model has been outfitted with a highly-tuned, oversize power system and all unnecessary weight has been trimmed. This synergy maximizes high-speed thrills without sacrificing the super-friendly handling you expect from an E-flite model.

Beyond the engineering and reinforced Z-Foam™ construction, the Bind-N-Fly Basic version includes the specially tuned Spektrum™ AR636A 6-channel receiver. Built-in AS3X® technology delivers rock-solid control without equal. That’s because it fights the effects of wind and turbulence so all you experience is the kind of locked-in performance that makes flying flat-out more thrilling than ever.

Whether you’re an experienced racing pilot or an intermediate sport pilot who wants an incredible high-speed experience, the E-flite Rare Bear is ideal.

With the Rare Bear Bind-N-Fly® Basic airplane and your full range DSM2®/DSMX® aircraft transmitter, you can be flying in the time it takes to charge a battery (battery and charger sold separately). An evolution in ready-to-fly convenience, this Rare Bear aircraft comes out of the box with servos, power system and a Spektrum 2.4GHz DSMX receiver already installed. It’s simple, especially when you use the recommended E-flite 3300mAh 4S 14.8V 50C Li-Po battery (sold separately).

Packed with a high-speed motor, robust ESC and a racing propeller, the highly tuned E-flite Rare Bear delivers incredible high-speed performance. Our average straight-line speed of 100+ MPH was achieved with a pre-production model with recommended battery.

The advanced AS3X® (Artificial Stabilization – 3-aXis) system built into the Spektrum™ 6-channel AR636A receiver (BNF Basic Only) helps give the E-flite® Rare Bear an incredibly solid look and feel in the air.

Specially reinforced Z-Foam™ construction makes it possible to replicate complex airframe detail and maintain rigidity while keeping flying weight low. Built into the structure is a scuff plate that helps protect the airframe during a belly-landing.