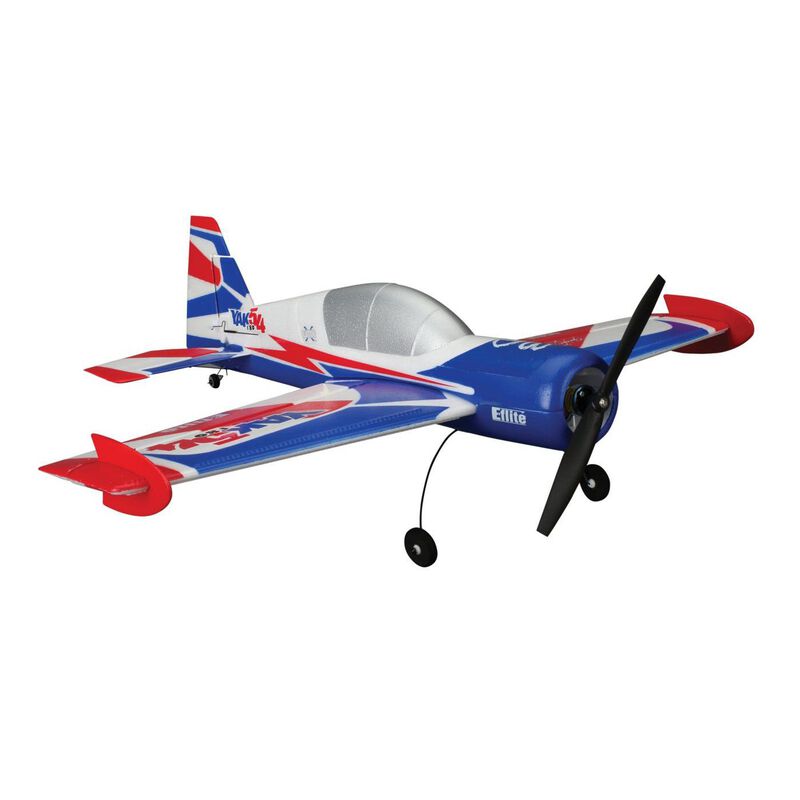 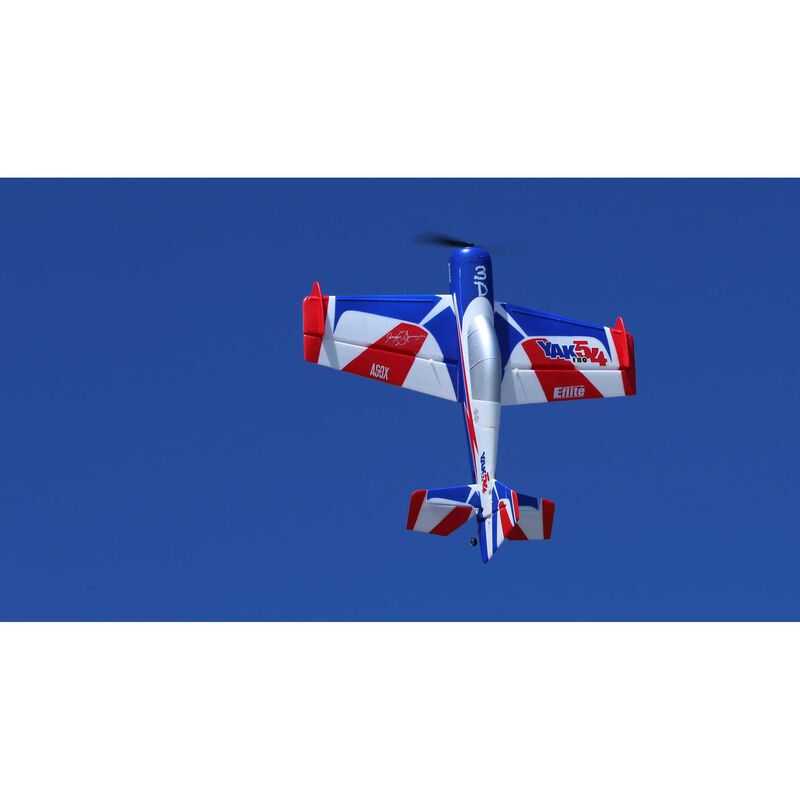 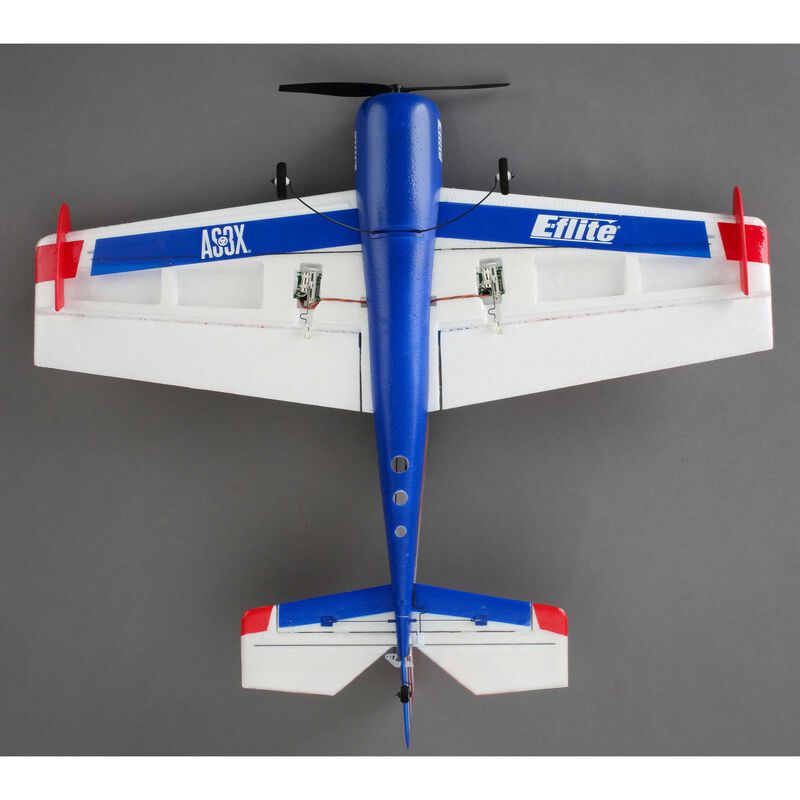 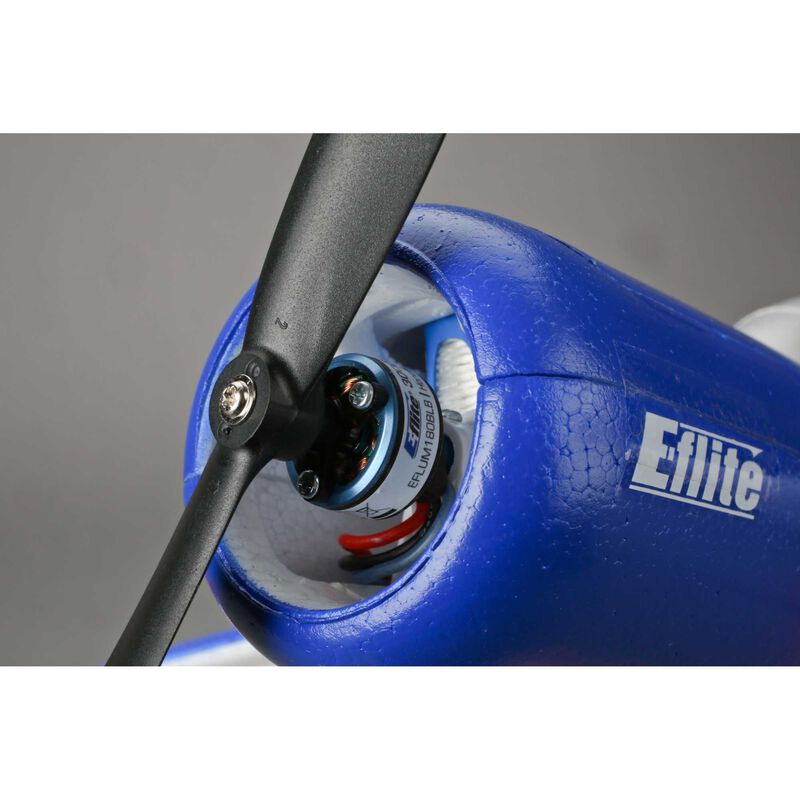 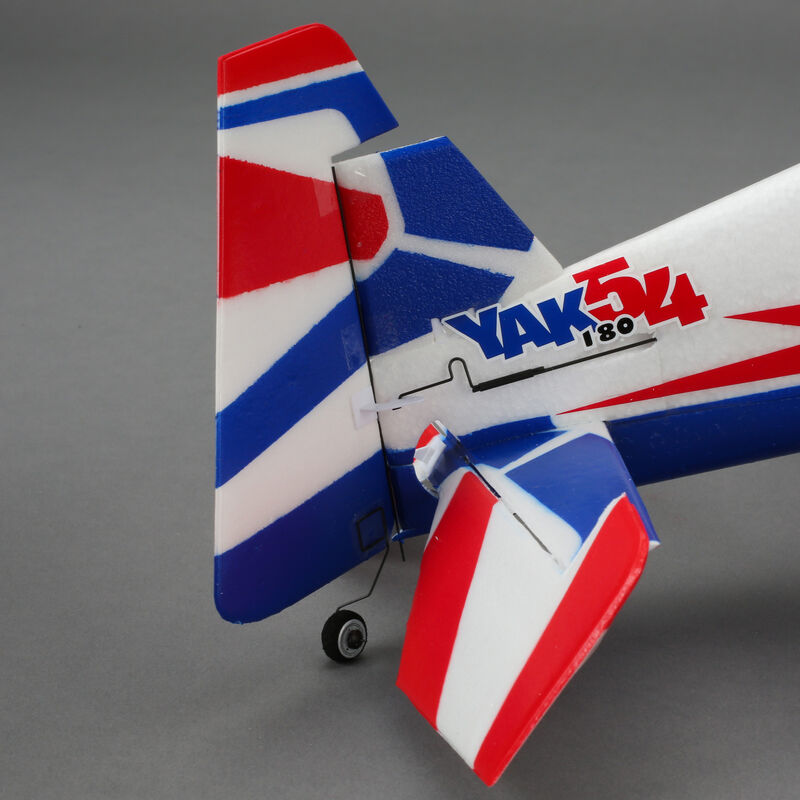 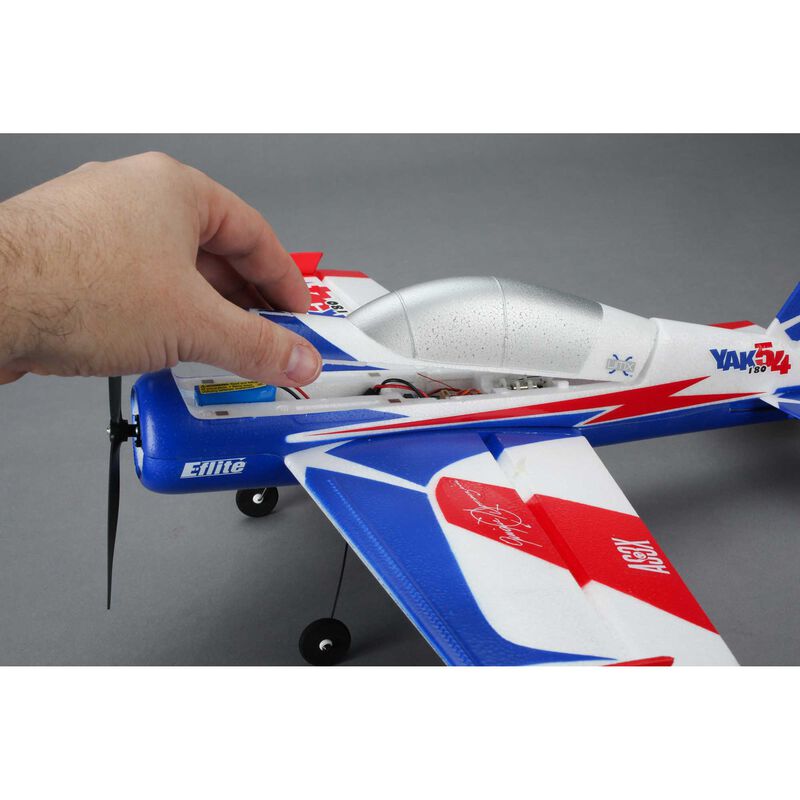 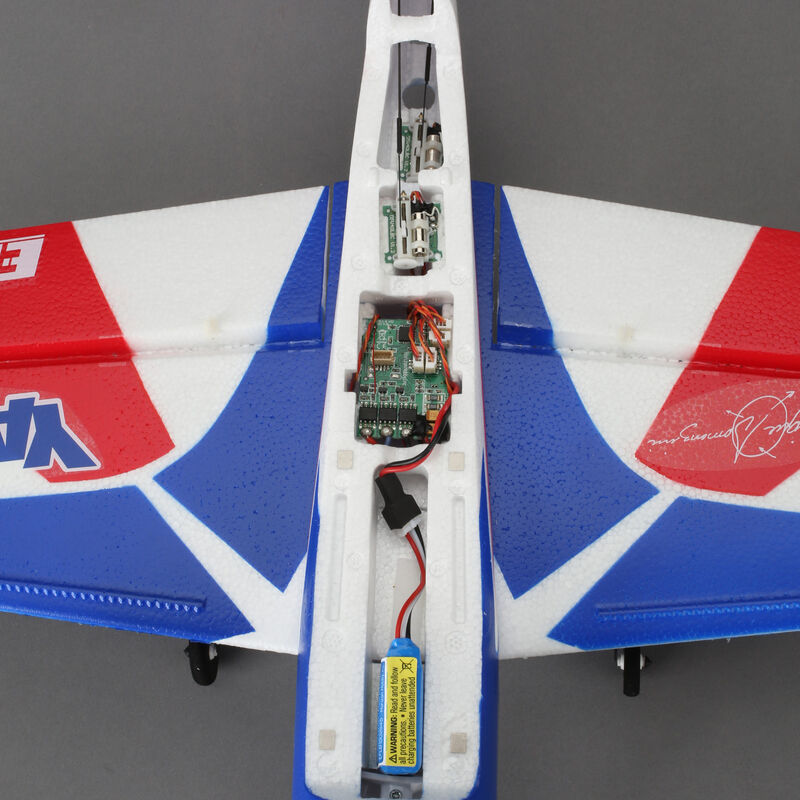 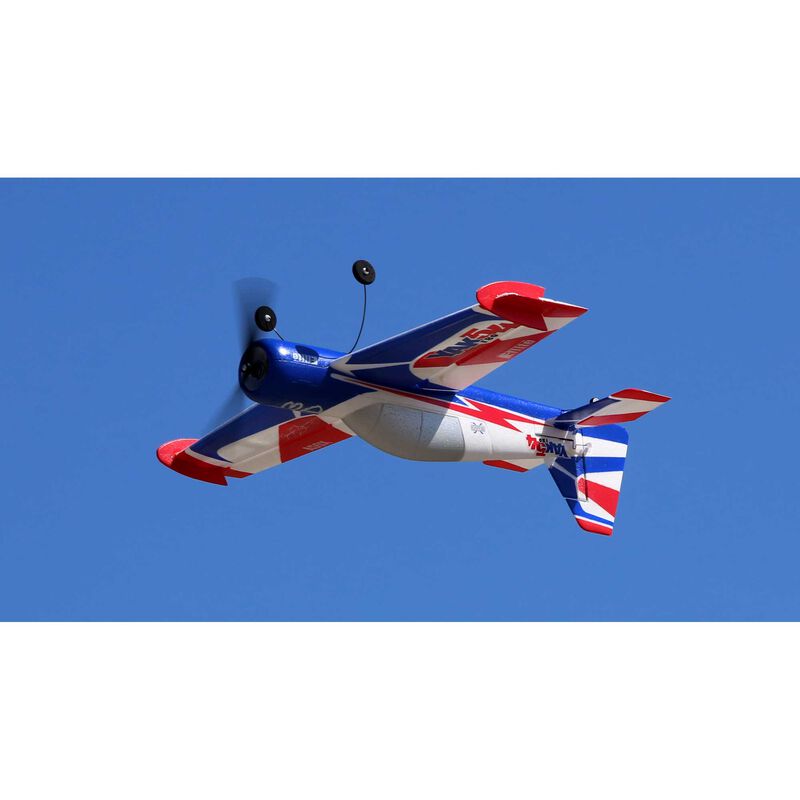 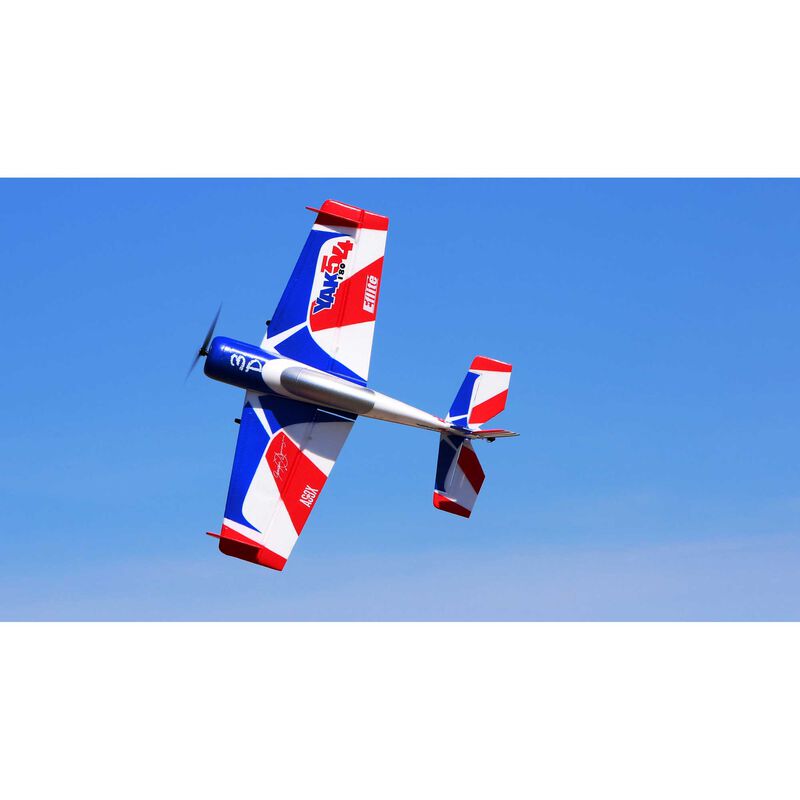 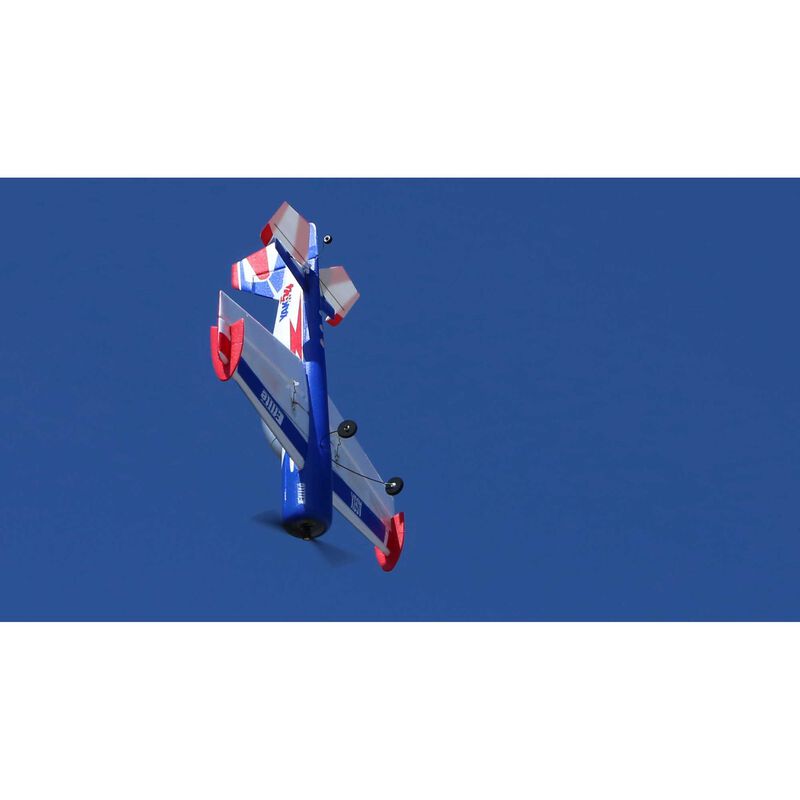 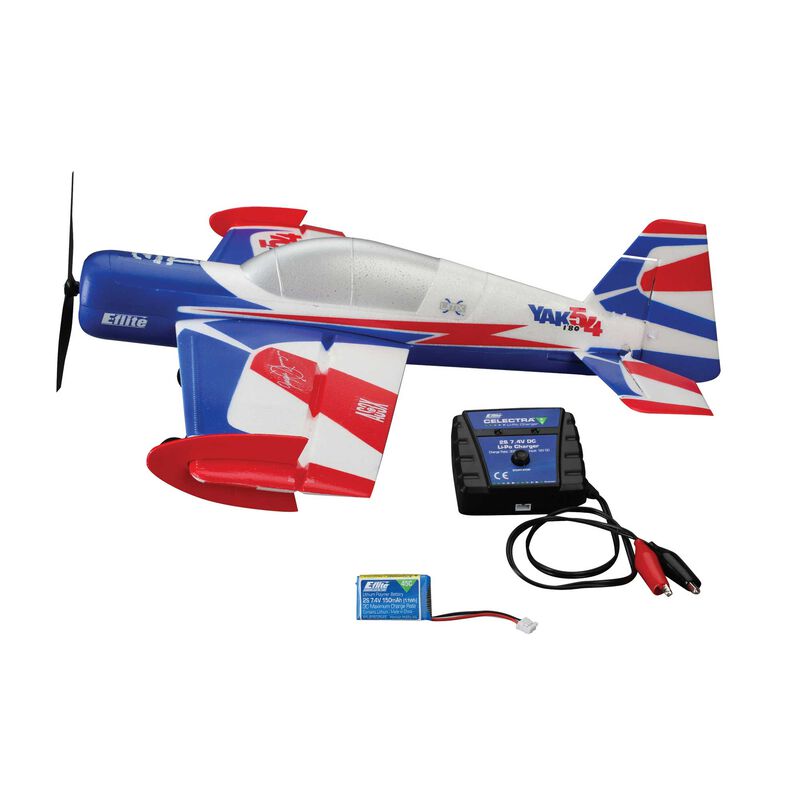 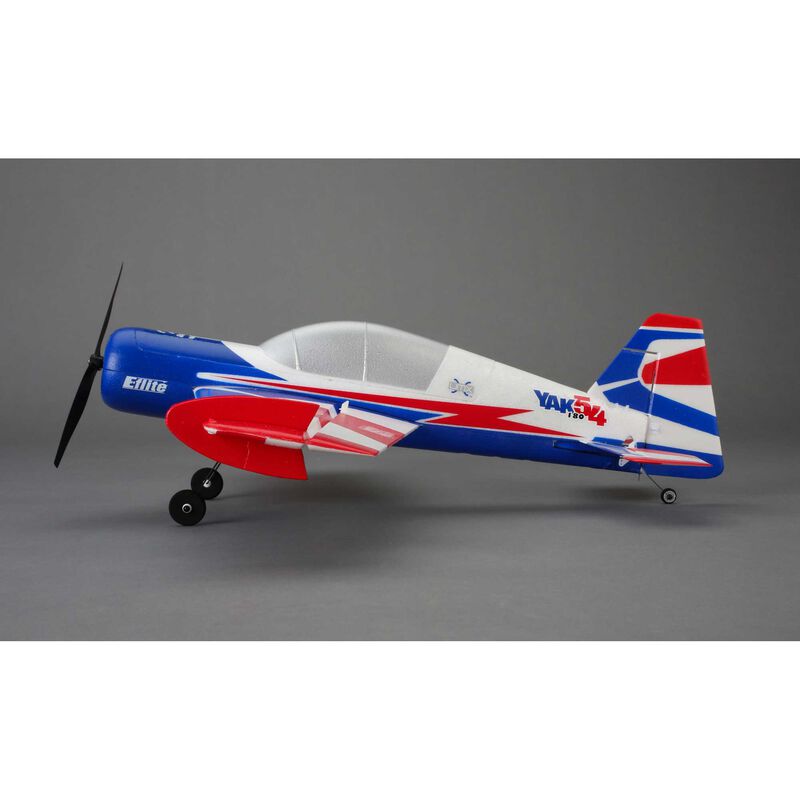 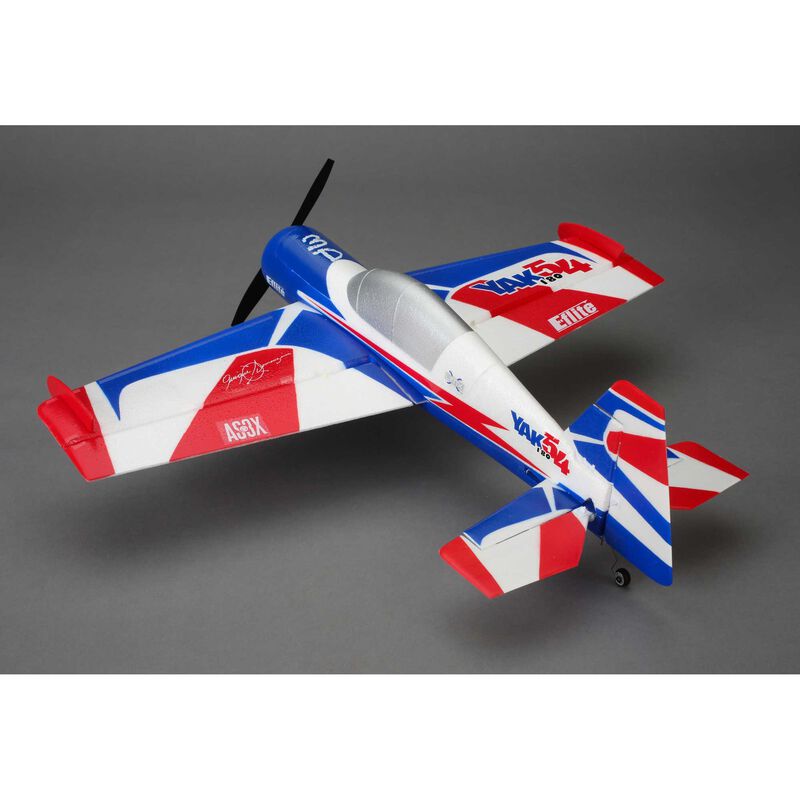 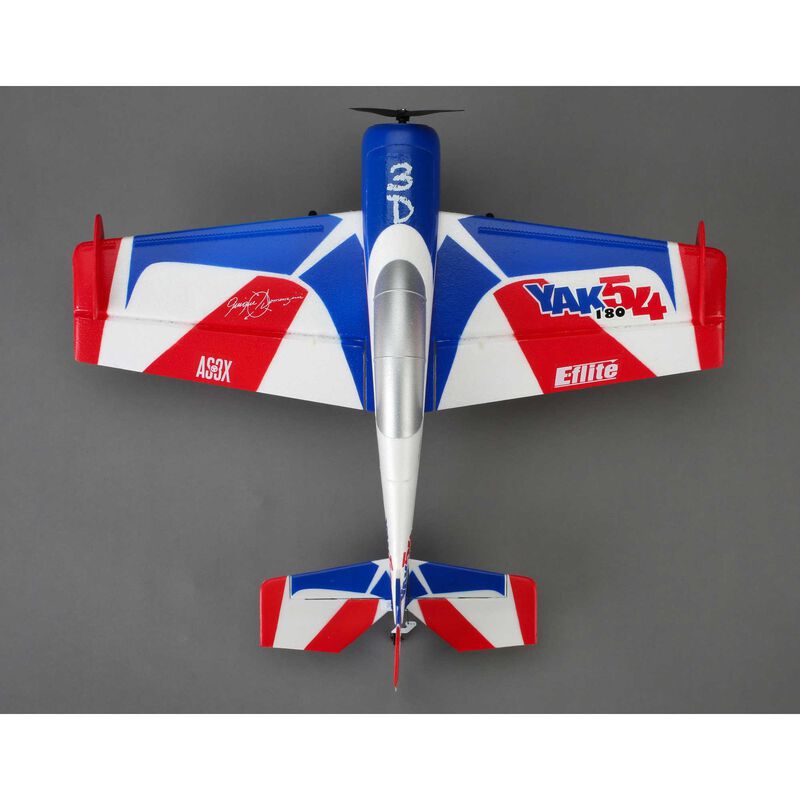 Item No. EFLU5080
This Item is No Longer Available

- A 4+ channel DSM2- or DSMX-compatible transmitter

The E-flite® UMX™ Yak 54 180 ultra micro airplane offers a bold new level of aerobatic performance. No other aerobatic design meets the challenge and demands of both precision and 3D versatility like the Yak 54 can. Recognized early on by Quique Somenzini, his Yak 54 concept ushered in a new era of RC aerobatic prowess. The UMX Yak 54 180 offers incredible speed and thrust from its E-flite 180-class brushless power system. But what makes this go-anywhere 3D thoroughbred truly special is its incredible AS3X® System that delivers remarkable control agility so you can perform aerobatics smoothly and have the control authority to pop sharply into 3D maneuvers with the stability of a giant-scale aerobat.

And despite its size, AS3X stability also helps you fly in moderate winds without seeing so much as a bobble, plus you’ll be able to perform high-alpha flight maneuvers that feel locked-in more easily. Additionally, you get all these features without having to spend a lot of time programming – no special mixing is required. Just charge and connect the included Li-Po battery, bind to a full-range DSM2®/DSMX® airplane transmitter, and the UMX Yak 54 180 will instantly offer you an incredible ultra micro RC flight experience.

Powered by
4.8 star rating 18 Reviews
0 Questions \ 0 Answers
ask a question
write a review
(16) (1) (1) (0) (0)
Show all reviews
ask a question
write a review
Thank you for posting a review!
We value your input. Share your review so everyone else can enjoy it too.
share
share
share
Thank you for posting a review!
Your review was sent successfully and is now waiting for our staff to publish it.
Thank you for posting a question!
Please click on the link in the confirmation email we just sent you to submit your question.
Your question will appear on the site once someone answers it.
write a review
ask a question
Updating Results
Verified Reviewer
0.0 star rating
10/21/20
Review by Anonymous User
On
share ' Share Review by Anonymous User facebook facebook Share Review by Anonymous User twitter twitter Share Review by Anonymous User LinkedIn linkedin Share Review by Anonymous User
10/21/20
Was this review helpful? 0 0
I
Iflyalone 5.0 star rating
04/08/15
my new favorite plane
Review by Iflyalone on 8 Apr 2015 review stating my new favorite plane
I am new to 3d so I cant give a review of static 3d maneuvers. My first 3d plane was the night visioneaire. I picked up the Yak 54 180 in hopes of learning more of the 3d moves on a less expensive plane. This little plane is amazing. I made my first flight at 50% on the rates and was quickly flying at a full 100% on the throws. This plane flies really good up to about 8 mph winds. I even took off in the street in front of my house and fly it in my tiny front yard until I stalled and nose dived into the driveway. A little wrinkle in the foam but no functional damage. I now go to the neighborhood school yard to play with it. It harriers really well and I have hovered it briefly several times. It takes off in about three feet and can be flown as slow as you like. 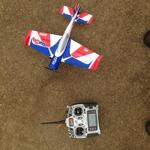 Yak 54 UMX.
Two weeks now and over 40 sorties no crashes . This little aircraft rocks !
Its not for newbies but very precise with its AS3X in windy conditions.
In a year I have gone from Champ-P51UMX-Sbach UMX to YAK 54 UMX.
At first I was a little in awe of this aircraft thinking my skills would be put to the test. However the DR/Expo settings in the book are right on it.
You can fly this aircraft fast or relatively slow. Fast can get into trouble real quick but out of trouble just as fast if you keep height. No real dramas so far.
Landing on grass you can &quot;stop &amp; plop&quot;. Runways require you fly in (as with the Sbach).
I've set my elevator D/R to 60% rate and 35% expo which has tamed landings in headwind a bit better.
The Spektrum DX6i compliments these aircraft for ability to change settings ,quality &amp; cost at an entry level Tx.

For added protection apply clear surgical tape to the underside of the fus. This will keep it looking new and give some extra strength. I've added a Sbach nose spinner not being a fan of bare props and trusting my abilities not to need to change out the prop.

I cant rate this aircraft on static 3D manouvers (yet) but all the usual moves like Cubans, Immelmans, rolls, wing-overs etc are sweet.
Side Force Generators SFG's.
I flew about 30 sorties without the SFG's thinking handling would change for trickier if added. However after ten or so flights I am a fan of them. Before when pointing skyward you had to steer the aircraft to the sky on about 3/4 throttle. With SFG's 100% throttle minimal input is needed before its a spec in the sky.
Make a template of the SFG's before fitting. Fit them overnight with UPVa glue NOT Cyno or Gorilla glue. I may add a bit of clear tape to them to be more robust on landings.
Today was windier and I found sidewinds did affect landings more with SFG's. Only to be expected but no great worry.

All UMX aircraft are easy to repair. Use UPVa not Cyno or Gorilla Glue (leaves scars). Best to set over night not in 60 minutes or 60 seconds.
Another quality of these UMX planes are that parts are all interchangeable ie servos, RX, 2S batteries with other models. So if I buy a spare servo my Sbach is covered as well.

If I had to choose between the Sbach and the Yak it would be a tough decision as my 3rd /4th progression aircraft. The Yak is just a little less easier to orientate compared to the larger stripey Sbach underside. However it is IMO the YAK is easier to fly/learn when set on lower rates.

That said, once I got a handle on this little monster it has been all grin and smile. I purchased 5 extra batteries, which gives me plenty of flight time throughout my day. The Yak is the first, and last plane I fly at the club; and I also fly it in between flights with my primary trainer. It’s a blast! The Yak moves right along at ¾ throttle and in a word is “precise”. Roll rate and tracking make me look like a much better pilot than I am. Transitioning to inverted flight and back is effortless at both high and low speed. Harrier to Hover … Knife Edge, flat turns, tail slides … The Yak 54 180 has done everything I asked. I have flow in 10mph wind – enough to blow this little guy off the runway – but the AS3X keep the Yak straight during flight. It behaves like a bigger plane!

I have managed to keep my Yak damage free and I hope these tips will help you too … Throttle controls altitude and pitch controls speed. Remember these points and you will be greasing landings with your Yak. Square yourself on final, and back off the throttle – watch as The Yak decreases altitude and glides in for touchdown – Cut the throttle quickly and the Yak will descend rapidly. Ease off the throttle slowly and The Yak will descend softly - Apply a bit of throttle at about 3 feet, as you prepare to flare and keep the nose up slightly. You need just a little power coming in … cut the throttle before touching down. Throttle control is not ON-OFF … you need to actively manage the throttle. This will save you from damaging the nose and prop. For grass landing remove the landing gear, hand launch and land on grass. Do not forget to cut the throttle before you are on the ground.