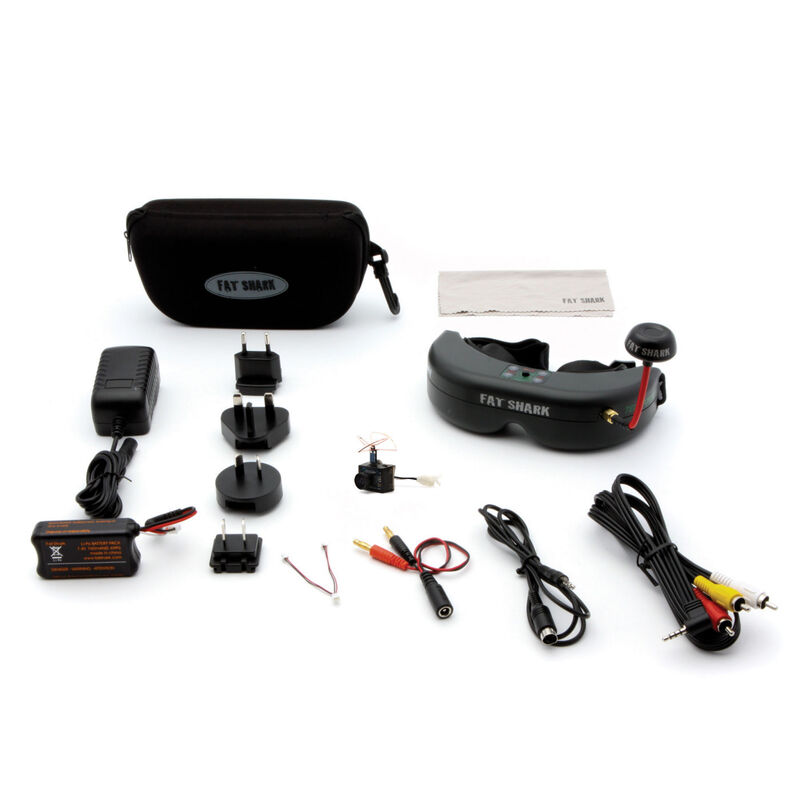 Item No. SPMVS1100
This Item is No Longer Available

Used to be, if you wanted to experience FPV (First Person View) flight, you had to piece together a system yourself. Once you did, you then had to figure out how to make everything work together. The Spektrum™ VS1100 Ultra Micro FPV System eliminates all the guesswork by giving you everything you need in one box. Camera, headset, batteries, charger - it’s all there, all compatible and can be ready to go in minutes.

This amazing bit of Spektrum technology combines an FPV camera, transmitter and antenna in a single unit no bigger than a thimble. Installation is easy and can be done in seconds. No soldering or special skills are required. You simply attach it to your model and plug in a 1S battery (sold separately). A Y-harness connector is included if you want to eliminate the weight of a separate battery and power the camera with the same 1S flight battery that powers the aircraft.

This headset accepts a diopter insert to accommodate those who wear glasses. The Headset Diopter Insert Kit includes one pair each of Diopter inserts rated -2, -4, and -6 dpt.

Developed exclusively for Horizon Hobby by Fat Shark, the Teleporter V4 headset is easily one of the best values in FPV fun. It’s compatible with all Spektrum and Fat Shark 5.8GHz FPV cameras and features:

One of the coolest features of the Teleporter V4 headset is digital head tracking. Digital head tracking lets you look around the environment your model is flying through without the extra weight and complexity of a mechanical camera gimbal. Special sensors and software in the headset allow you to pan and tilt your field of view using the fixed-position VA1100 camera that’s included. It’s just one more way this Spektrum FPV system lets you have more fun with fewer hassles.

Powered by
4.8 star rating 12 Reviews
0 Questions \ 0 Answers
ask a question
write a review
(10) (1) (1) (0) (0)
Show all reviews
ask a question
write a review
Thank you for posting a review!
We value your input. Share your review so everyone else can enjoy it too.
share
share
share
Thank you for posting a review!
Your review was sent successfully and is now waiting for our staff to publish it.
Thank you for posting a question!
Please click on the link in the confirmation email we just sent you to submit your question.
Your question will appear on the site once someone answers it.
write a review
ask a question
Updating Results
Verified Reviewer
0.0 star rating
09/27/20
Review by Anonymous User
On
share ' Share Review by Anonymous User facebook facebook Share Review by Anonymous User twitter twitter Share Review by Anonymous User LinkedIn linkedin Share Review by Anonymous User
09/27/20
Was this review helpful? 0 0
L
Lessund 5.0 star rating
07/30/16
Awesome entry level system
Review by Lessund on 30 Jul 2016 review stating Awesome entry level system
I bought this a few weeks ago to try FPV flying. Based on the reviews, it looked like a good idea. It is and was. SAdly it appears it's been discontinued. That's unfortunate because one of the biggest deterrents to trying FPV for me was the overwhelming amount of information and terminology to learn. This eliminated all that and I was up and running in about 30 minutes and it worked perfectly. I first mounted the 1100 on a small quad to practice with little chance of damage or injury. Within about 30 minutes I was flying with some confidence. It is a whole new world and I've been flying RC for 35 years flying 3D, Helis, pattern, scale etc. This was like learning all over again.

The key to learning FPV, with no assistance, is only try in perfect conditions like wind, bright light etc. use a simple stable aircraft. The more powerful 2500 camera is a must for longer range flying.

I mounted the system on the MOA glider which is a great flying aircraft. It was calm, with early morning light. It was amazing to fly with the FPV system, but I learned a really valuable lesson I'd like to pass along to others who, like me, are stubborn and fly without a spotter and what happened. I made one quick flight with the FPV items installed without the goggles to make sure it flew properly. I trimmed it for huge flat circles with about 30% power. I then landed, turned on the FPV camer/goggles and launched it. When it was about 200-300 feet up, flying hands off, I put on the goggles. The picture was flawless, bright clear and smooth. After about 3 circles I started to do some maneuvers. I've flown real planes and gliders for many years and this was very similar and I was completely comfortable. Keep in mind your perspective is totally different than anything you've experienced before flying RC.... Now, you aren't flying as you are used to, watching it fly back and forth, but instead only in one direction, so after awhile, if you take off the goggles, it is VERY, very, very hard to find in the sky, because it can be in front of you, high, low or even behind you, it may be near or far!!!!. This is where near disaster happened.

I could hear the motor running, but it was faint. So I knew what quadrant it was in, but that's it. I took of the goggles and for at least 45 very long seconds could not find my plane, nothing but blue sky and puffy clouds. I began to panic, and was preparing myself to lose a couple hundred dollars of equipment.. I put the goggles back on and it was banking about 60 degrees and going down in a steep decent. I went ahead, took a deep breath and got it straight and level again, but had no idea where it was in relation to me. I was over a rural with no buildings of any kind and many ponds and scrub type land. I did many circles but could figure out where &quot;Home&quot; was. I could see beautifully, but it all looked the same.... I did know I was West of my location, so I flew in the direction of the sun, knowing that I would eventually cross overhead. It worked... The motor began to get louder and louder. I knew it was high, maybe 500 feet; so I reduced power and started a decent. I finally saw my car and me in the goggles. I removed the goggles and there it was!!! All was good. I landed normally and was greatly relieved.

I was thrilled with the performance of this system. Even when it was at least 1/4 mile or more away, the video was solid with only a hint of snow. Had it lost the picture, I'd be out one very nice glider, radio and FPV equipment.

So if you are going to do like I did and try to do this all by yourself, here are some tips in addition to the ones I just mentioned. Fly either in the AM or late PM, so the sun can be used to locate where you are. Don't just go up and meander around aimlessly like I did because you might get lost, like I did. Pick out a planned flight path and stick to it..Stay close, it's amazing how fast your plane will leave the immediate area. Next, look on Google maps of the area you are going to fly over and become familiar with it, notice anything that can be used as a landmark. Don't fly where there are obstacles. Pick a SLOW, stable airplane!!