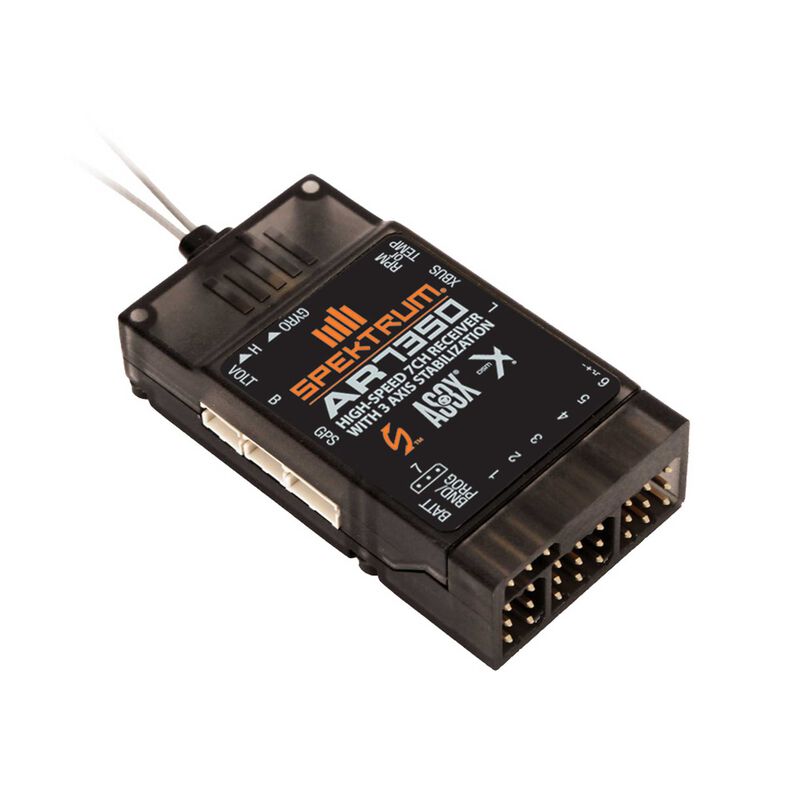 SPMAR7350_SPMAR9350_Bulletin.pdf
This item is no longer available. Updated or related products shown below:

A new generation of Spektrum™ AS3X®(Artificial Stabilization – 3-aXis) receivers is about to make it easier than ever for fixed wing pilots to transform their flying experience with this amazing technology. Like their predecessors, they combine AS3X technology with a DSMX® receiver in a single unit. What sets them apart is programming software that makes setup and adjustment of their AS3X settings much easier.

Android and Spektrum iX12 users please note, due to the changing nature of Android FSK modulation, the audio programming cable (SPMA3081) no longer functions with those devices. The best interface for all devices is the Spektrum Bluetooth Module (SPMBT1000). It is faster, more reliable of a connection and you can simply leave it plugged into your receivers and access when you need to make changes.

For info and where to purchase the Bluetooth module please visit http://bit.ly/SPMBT1000

Powered by
0.0 star rating
0 Questions \ 0 Answers
ask a question
write a review
(2) (0) (1) (0) (2)
Show all reviews
ask a question
write a review
Thank you for posting a review!
We value your input. Share your review so everyone else can enjoy it too.
share
share
share
Thank you for posting a review!
Your review was sent successfully and is now waiting for our staff to publish it.
Thank you for posting a question!
Please click on the link in the confirmation email we just sent you to submit your question.
Your question will appear on the site once someone answers it.
write a review
ask a question
Updating Results
Verified Reviewer
0.0 star rating
05/17/21
Review by Anonymous User
On
share ' Share Review by Anonymous User facebook facebook Share Review by Anonymous User twitter twitter Share Review by Anonymous User LinkedIn linkedin Share Review by Anonymous User
05/17/21
Was this review helpful? 0 0
S
Stephen77
5.0 star rating
07/05/16
7 Channels &amp; telemetry built in.
Review by Stephen77 on 5 Jul 2016 review stating 7 Channels &amp;amp; telemetry built in.
This is a very easy decision if you want to use telemetry. The AR 635 is $79 with 6 channels then to add telemetry it is another $49 for a total $128. Very easy decision as the whole AR 7350 package is $139 with 7 channels less weight and less hassle in installation.
I have used Spektrum AR 635 , AR 636 , AR9350 and now the AR7350. The capability's are a good value for the cost if you want the best. I use the AR 7350 in a P-51 it handles the retracts, flaps, and the 7th channel drops some flour bombs! I would recommend this product if your interested in knowing the battery left and temperature of the battery. The telemetry has saved me once when I had LiPo overheat in flight it works!
On AR7350 7-Channel AS3X Receiver with Integrated Telemetry
share ' Share Review by Stephen77 on 5 Jul 2016 facebook facebook Share Review by Stephen77 on 5 Jul 2016 twitter twitter Share Review by Stephen77 on 5 Jul 2016 LinkedIn linkedin Share Review by Stephen77 on 5 Jul 2016
07/05/16
Was this review helpful? 1 0
J
Jim K.
5.0 star rating
11/17/15
ar7350 etc. interface to iPhone.
Review by Jim K. on 17 Nov 2015 review stating ar7350 etc. interface to iPhone.
Following are some points that may be helpful in your setup.
1. Make sure you have the latest iPhone app from the App Store.
2. Before attaching the cable to the phone, make sure you have your iPhone volume turned all the way up. Attach the cable to the receiver at the BND/DATA port.
3, Power the receiver with the flight battery. You do not use the transmitter.
4. If the app will not link to the receiver, try power cycling the receiver.
5. If you are still having trouble with linking, try power cycling the iPhone and go through the steps again.

If you have a gas or glow model, you may reverse the throttle channel from the transmitter.
On AR7350 7-Channel AS3X Receiver with Integrated Telemetry
share ' Share Review by Jim K. on 17 Nov 2015 facebook facebook Share Review by Jim K. on 17 Nov 2015 twitter twitter Share Review by Jim K. on 17 Nov 2015 LinkedIn linkedin Share Review by Jim K. on 17 Nov 2015
11/17/15
Was this review helpful? 0 0
A
A F.
3.0 star rating
11/12/16
Not Impressed
Review by A F. on 12 Nov 2016 review stating Not Impressed
DX9, 28% sBach342….DLE 35RA
All digital electronics...
This is my first purchase experience w the AS3X system, but not my first hands on experience. I have many, many hours of providing training w the foamy Super Cub and the Apprentice 15E…………I don’t think the AR7350 is the same process!!
I'm not a big fan of teaching a new pilot to fly w AS3X, as I believe it teaches a student some VERY bad habits, but still allows them to return to the field for another lesson without breaking an aircraft. So yes it does work!
And I’m sure the AS3X in this AR7350 receiver works as designed, but I'm not convinced it’s the right receiver for this aircraft. I did a text book, by the numbers, install/programming and have it tuned to what I believed would be close to perfect, dialing in 3 switch positions. I had position 3 as the radical tune, and position 2 mildly tuned, via a recommendation from Spektrum tech support. First flight, wobble-wobble, the gains were WAY too high, so, like a good boy scout, I started searching for that sweet spot. I am not using any Heading Gains, but rather played w the rate gains only to see what, if any difference it would make. Ultimately, after still getting wing wobble at only 25% roll rate gain; I zeroed everything out across the board. That just makes this expensive 7-channel receiver a typical 7-channel receiver, except its only programmable from my iPhone. I got tired of unscrewing my canopy every time to make nuisance gain changes, (I know the perfect setting can be achieved real time w the software), but I chose to not fuss w that process. Bottom line, I don't really care for the need that it is MANDATORY to make setting changes only via the software from your iPhone. I guess I could makes changes via my PC, but that would require a really long extension cord. You are required to plug everything in, in a particular order each time. I know it sounds like I’m doing a lot of whining; it’s not a deal breaker, but still not my cup-o-tea. One other MAJOR flaw w this receiver is the inability to &quot;live&quot; sub trim your control surfaces, it CAN’T be done!! If you watch the video on how to set this receiver up, the tech shows and explains that this can be done via the software and you get to see active sub trim changes as they are being applied. Evidently this setup promo video is an older version of the setup process which isn’t exactly accurate for the AR7350. Personally, I found that most of the video was useful, EXCEPT for the part of the video they left out that says you have to now guess the +/- sub trim settings in order to dial in your control surfaces because it’s not a dynamic change. Is it +15 up, and -25 down?? only a receiver reboot about 5-6 times will tell!! Even though my control surfaces are mechanically as close as I could get them, ultimately, some sub trim is usually necessary, otherwise, why would the designers of the software APP include SUBTRIM changes??? I called the Spektrum shop to verify this flaw in the firmware, and it was confirmed that you have to hit/miss the sub trims with a reconnect of the receiver each time to get them right?? Really???? This is a critical FAIL on the part of Spektrum for even allowing these receivers to go out the door with this issue unresolved. I guess it’s not about the users anymore; it’s really all about vendors??
I’ll continue to buy and use HH and Spektrum products, because, after all they do take good care of their customers, and always have. But I will also post reviews that are as accurate as I believe, and even though that item is proven 100% reliable and “race track” ready with inherent flaws, the end user needs to know this which gives them the tools to make an educated decision before buying and flying. 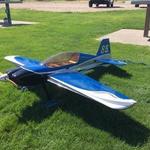