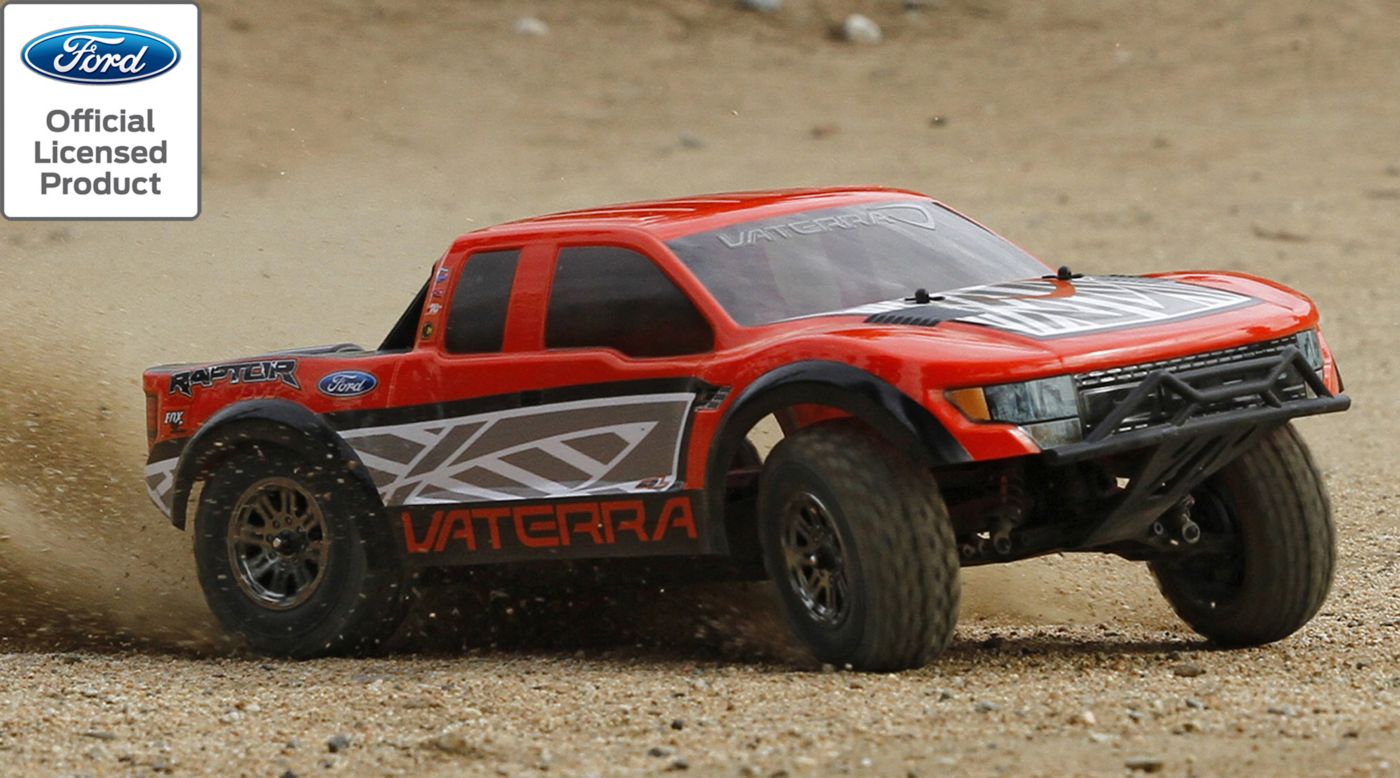 It doesn’t matter who you are. The massive presence and menacing growl of a Ford Raptor awakens something primal when you slip behind the wheel. That’s because the Raptor is no mere pickup truck. It’s a 411 hp call of the wild built to tear across desert wastes and assault rock-filled ravines, much like the Baja pre-runners and trophy trucks that inspired its creation.

The Vaterra® Ford Raptor pre runner is engineered to be driven just like the awesome Raptor trophy trucks that compete in grueling, long distance desert races like the Baja 1000. Underneath its detailed body is a rugged 4WD chassis complete with long-travel suspension and metal gear VTV™ (Viscous Torque Vectoring) differentials. This, combined with its high-output Dynamite brushless power system, will allow you to tackle any terrain at speeds of over 55 mph. And you’ll do so with the unbelievable stability of Spektrum™ AVC™ (Active Vehicle Control) technology that makes hundreds of steering and throttle corrections per second so you can drive faster with more control.

Patent-pending Spektrum AVC technology uses a combination of sensors and software algorithms to adjust steering and throttle output at a rate faster than humanly possible, so you enjoy a more manageable driving experience.

The licensed body is modeled after the Raptor pre runner trucks that compete in grueling long distance desert races like the Baja 1000. It comes pre-painted with cooling fan and fuel tank details as well as official Ford badging.

Rain or shine, mud or sand, the waterproof servo, receiver and speed control allow you to run wild without worry.

Revel in the power of a potent Dynamite 3300Kv, 4-pole brushless motor system that delivers massive torque and speeds of over 55 mph.*

The innovative VTV differentials prevent wheel spin on loose surfaces when cornering hard or hammering the throttle. Their smooth engagement and consistent feel, along with AVC technology, will give you confidence to run fast on all types of surfaces.

Technical questions about this Vaterra product should be directed to Horizon Hobby's Product Support Department: