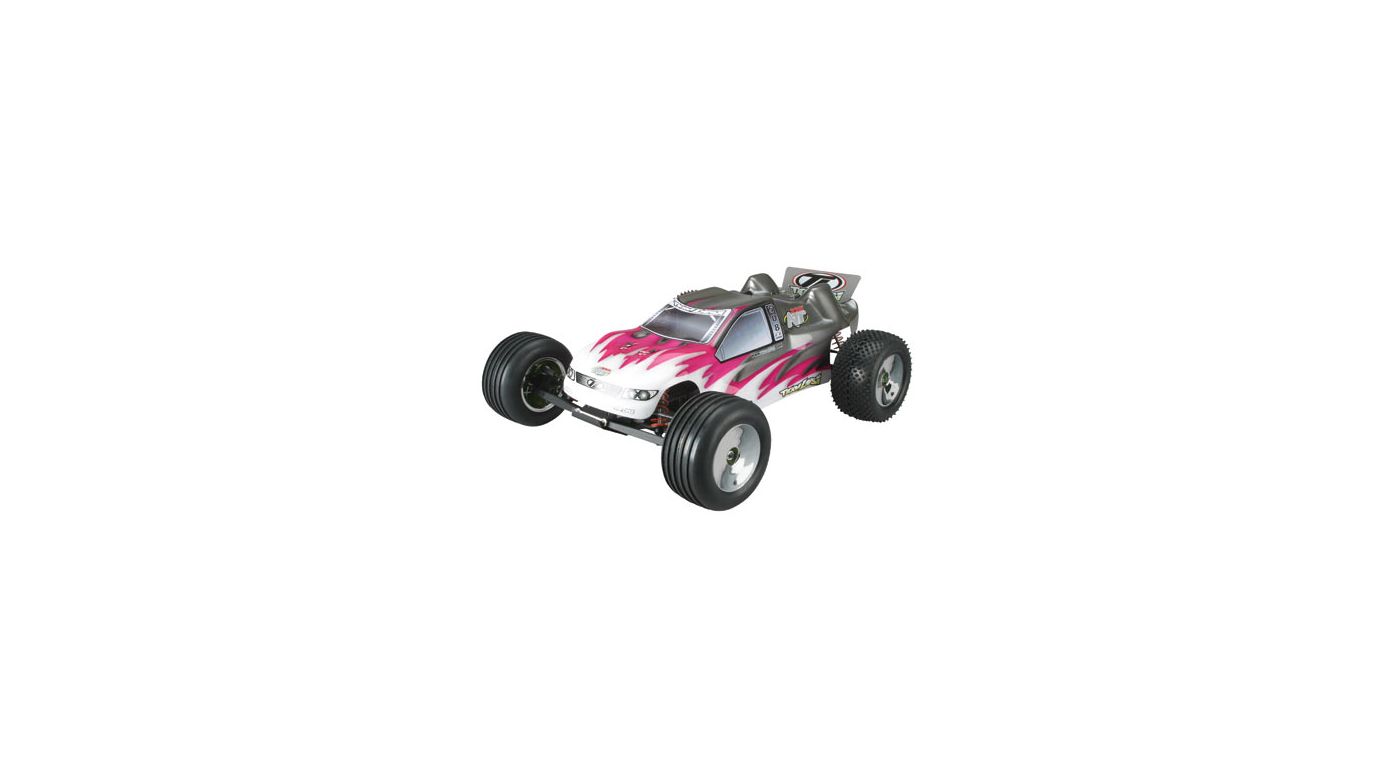 Where it differs is in the addition of a race caliber, rear-exhaust Mach .15 engine, an all-new tuned exhaust system and the convenience of Team Losi’s Spin Start electric starter. The result is a 40 mph off-road nitro truck that will make anyone more than a match for sportsman class competition right out of the box. If you’re looking to make a grand entrance into the world of off-road nitro racing, this is the truck.

Pins, U-Joint LOSA6400
$1.99
This item is no longer available
Unavailable

E-Clips, Large LOSA6101
$1.99
This item is no longer available
Unavailable

Yoke & Screw for Dogbone LOSA3083
$4.99
This item is no longer available
Unavailable

Universal Pivots LOSA3014
$5.99
This item is no longer available
Unavailable

Differential Balls 3-32 LOSA3009
$1.99
This item is no longer available
Unavailable

Monster Diff, Gear Only: XXX-NT LOSA2925
$3.99
This item is no longer available
Unavailable

Antenna Kit LOSA4002
$4.99
This item is no longer available
Unavailable

Servo Tape LOSA4004
$1.99
This item is no longer available
Unavailable

Clutch Spring for machined shoes LOSA9363
$3.99
This item is no longer available
Unavailable

Foam Pre-Filter LOSA9303
$3.99
This item is no longer available
Unavailable

Body Clips LOSA8200
$1.49
This item is no longer available
Unavailable

How long will it run on a tank of fuel?

Run time will be determined greatly by the speed you are running. When running on an off-road track you can expect 7 - 10 minutes per tank. If you are running at higher speeds on the asphalt it will be less. Of course you have the ability to "make a pit stop" refilling the fuel tank before it runs dry for longer runs.

How fast will the XXX-NT Sport go?

Look for speeds of between 30 and 40 MPH. One of the things that separate the XXX-NT Sport from the other ready to runs is its ability to handle bumps, jumps, and off-road terrain with greater control at speed.

Can I convert it to electric?

No, the technology and design requirements are dramatically different for electric trucks. The XXX-NT Sport is specially designed to be a hi-performance nitro truck.

What kind of fuel should I use?

Use only fuel mixed specifically for R/C cars like Blue Thunder, Trinity, or similar. Nitro content should be no more than 20%.

Do you have to be mechanically inclined to run it?

You should have some mechanical ability or have the help of an adult who does. Nitro trucks are not toys and will require some maintenance to operate at keep running at peak performance.

Does the XXX-NT Sport have reverse?

No, only the play type cars have reverse. The XXX-NT Sport is designed to be a hi-performance ready-to-run. The use of reverse is not allowed in racing and the additional parts and assemblies needed dramatically decrease speed and handling.

Is the XXX-NT legal to race?

The chassis is completely legal but engine is .15 size, which is a little oversize for major events. However, most clubs and commercial tracks welcome new racers with ready-to-run trucks and allow them to compete.

How tight should I run the slipper for it to work correctly?

Tighten the adjuster nut down until it almost stops then back it out five full turns.

How tight should I run the differential?

The differential should be checked regularly and always kept tight. After initial break-in and tightening you should check it regularly and tighten it if necessary. The diff should never slip, that's the job of the slipper.

Why is the engine hard to start even though I have the throttle wide open.

Why is my truck hard to start after it truck runs out of fuel?

This is probably because the engine is hot and without fuel running through the carburetor, it also gets hot and creates a vapor lock that doesn't allow the new fuel to flow to it. Let the engine cool and retry.

Why do my transmitter batteries keep going dead?

It is absolutely critical that you maintain proper battery power for the transmitter as well as the truck. You should make sure both the transmitter and truck are turned off when not in use. Make sure you use only premium "Alkaline" type cells or the battery life will be shorter.

The servos in my truck are moving slowly, are they worn out?

Probably not. Sounds like the receiver batteries in the truck are about used up and need to be replaced. When you notice slow radio response or servo movement its time to stop and replace the batteries.

Do I have to use filter oil on the foam air filter elements?

Yes, washing and re-oiling the air filter is critical for both performance and engine life. Failure to do so voids any engine warranty Never run the elements dry.

I was adjusting the carburetor and now the engine won't start or run. What do I do?

As noted in the operating instructions return the needles to their starting settings by turning them clockwise until you feel increased resistance then backing them out by turning them in the opposite direction 2  1/2; turns for the high speed and 4 turns for the low speed. If it still doesn't start refer to the trouble-shooting guide.

Why does the engine quit running when I hit the brakes and stop the truck?

Usually the idle speed is set to low. Try increasing the idle speed on the carburetor. If the problem persists try changing the glow plug. If it still won't idle while stopped, check the clutch for a worn or broken spring.

Are there better tires for running on pavement?

Yes, Team Losi offers special "T-90" tires for on-road use. These are available in soft Silver and extra soft Red rubber compounds and can be purchased pre-glued.

How do I prevent flooding the engine?

Always keep the back end of the truck higher than the front. Never store the truck with fuel in the tank. It's always a good idea to loosen the glow plug and turn the engine over a few times before starting to prevent flooding and potential damage.

How do I make my truck go faster?

There are gears available that will make your truck faster but with slightly slower acceleration, which might be good for running on an oval track. There is also a gear that will make it accelerate quicker but not go quite as fast which would be good for sand, hill climbing, or short off-road courses.

NT' Tips: although Team Losi’s XXX-NT Nitro Truck has only been released for a short time, you racers have gone wild buying them up as fast the dealers can get them in. With this popularity has come a few good questions as well as a few tips that you might like to take advantage of.

Gear Adjustment; to be able to accomplish a number of things critical to the design, Gil Jr. had to incorporate adjustable motor mounting. Don't worry though, setting the proper gear mesh is not difficult. The bottom of the NT chassis has machined slots where the motor mounting screws and countersunk washers go. These slots help tremendously in keeping the motor straight and the gear teeth aligned. With the mounting screws loose slide the motor back until the gears are tight to one another. Move the motor forward about 1/32. If you have trouble judging this, try placing a small strip of notebook paper between the gears where the pinion on the clutch bell contacts the spur before you slide the motor back. After securing the motor, the paper should roll out from between the gears with a fair amount of resistance. In either case, after the motor mount screws have been tightened there should be a slight bit of backlash as you rotate the spur gear. You want the gears to get about 80 to 90% engagement. To check this you can either rely on the "feel" as you hold the clutch bell and rotate the spur back and forth or look directly at the gears from the right side of the truck as you rotate the rear tires. There should only be a slight bit movement between the gears. The mesh is too tight if there is no movement between the gears or they make noise and the tires do not spin freely. Move the motor forward slightly to correct this. If there is additional movement or the wheels spin freely but the gears "slap" teeth as they rotate the mesh is probably too loose. Moving the motor back slightly will correct this. After you have tried several settings and techniques and observed the engagement from the side you should have no trouble getting a good mesh.

Monster Diff: The new "monster" differential designed for the NT will handle the extreme power of nitro motors. However, like all other differentials, it is not a slipper device. This new unit is designed to have not only greater power handling capabilities but also a broader range of adjustment. As with any differential, start by adjusting it per the instructions. The most reliable method of adjustment requires that you first lock up the slipper by tightening it until the spur gear won't move without ripping the flesh from your hand. Grab the spur gear tightly between your thumb and first finger while cradling and holding the right rear tire firmly between your forearm and chest. Now try to turn the left rear tire forward. If it turns at all tighten the diff 1/8 turn and test again. When the diff stops turning and starts jumping and locking again (often referred to as chirping or barking) requiring substantial twisting of the rear tire it's at the beginning of its useful adjustment range. Most of the pro’s run their diff on the right side but you should be able to find your "sweet spot" by gradually adjusting it tighter.

Throttle linkage; The NT includes linkage for both slide and rotary type carbs. More importantly, this linkage package allows for the use of radios without end point adjustment (EPA). More than a few throttle servos have failed due to the lack of this feature. Those of you with EPA would be wise to use this as well. Just as you don't want to stall the steering servo the same is true for the throttle. Install the small spring (uncompressed) between the pull side of the pivot on the servo arm and the set collar at the end of the linkage. This will absorb the extra servo movement and prevent stalling which will drain the receiver battery and eventually cause servo failure.

Find the Crystal; Want to change radio crystals without removing your receiver cover or cutting a big hole in it? Pick up a package of Team Losi #A-3244 4WD access plugs. Position the receiver with the crystal pointing out within the box created by the receiver cover. Cut a small rectangular opening 5/16" by 5/8" in the cover over the crystal and insert the rubber plug. Now when you need to change crystals all you need to do is remove the rubber plug. The receiver stays clean and dry.

Technical questions about this Losi product should be directed to Horizon Hobby's Product Support Department: