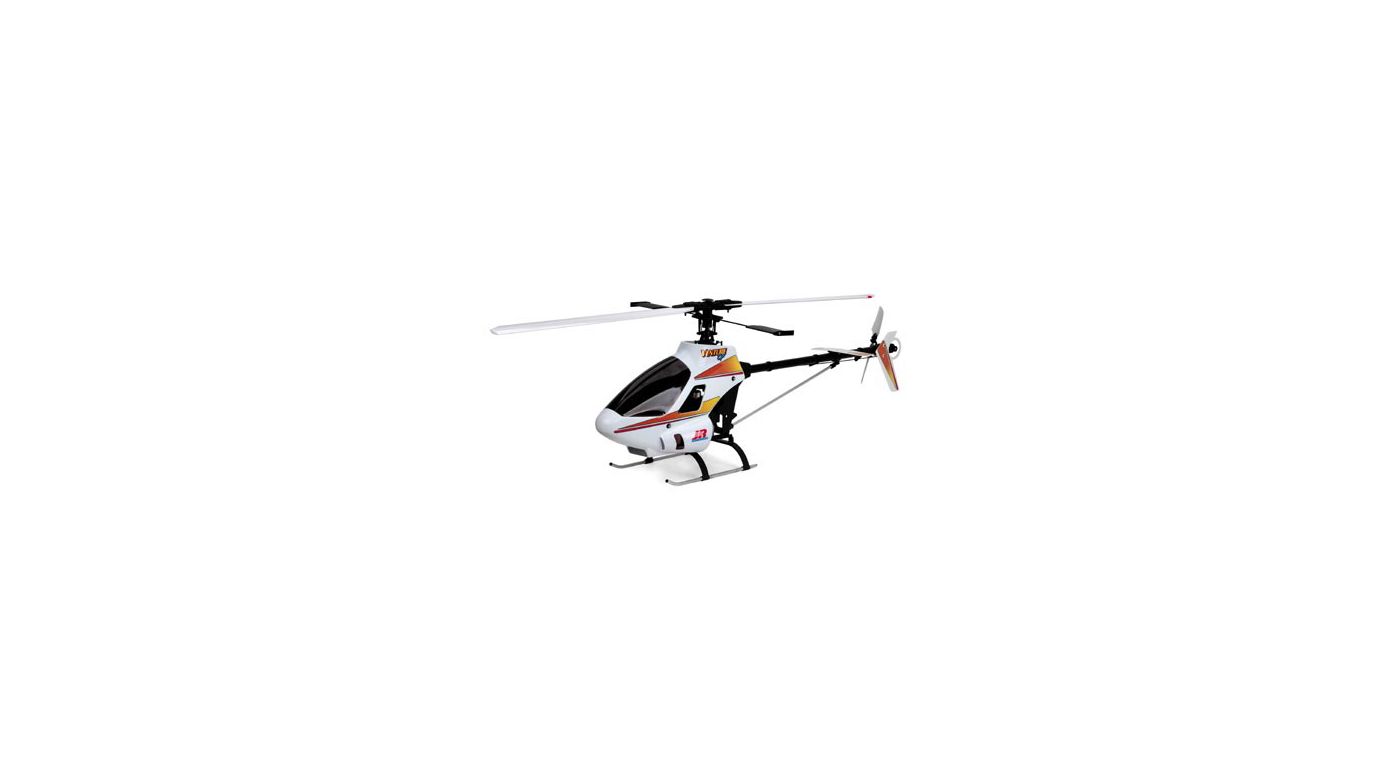 It's common knowledge: beginner helis are supposed to be stripped down machines capable of nothing more than teaching you the basics and to be promptly discarded once you've mastered them. Well, the folks at JR obviously didn't get that memo. The new, almost-ready-to-fly Venture CP combines the power of CCPM flight control with a versatile design that can take a complete beginner from the basics, through intermediate flight, all the way to thrilling advanced aerobatics.

Get Off To a GREAT Start

As an entry-level helicopter, the Venture CP is hard to beat. Its quick assembly time, ball bearing precision, and rock solid in-flight stability set the novice up for success right from the start. Since it's almost-ready-to-fly, all the really complicated assembly, like the rotor head and main frame, is done for you. What little assembly is left can be finished in a single afternoon. Basically, this involves bolting on the tail assembly, installing the servos and electronics, and mounting the engine and muffler. A thorough step-by-step manual guides the beginner through it all. Radio programming, troubleshooting, and the basics of hovering are also covered in the manual.

When the time comes to take that first flight, beginners will benefit from the smooth, precise flight control of CCPM-Collective Cyclic Pitch Mixing. With CCPM, the swashplate servos work together to control cyclic and collective functions instead of using a separate servo for each. Since the servos work together, you won't have to use expensive digital or super servos. Standard sport servos, like JR's S537s, will work just fine. Maintenance and repair is much easier too, because of the low number of parts necessary to make a CCPM system work.

Unlike many other helis in its class that use bushings, the Venture CP sports ball bearings throughout the rotor head. Not only does this make control inputs silky smooth, but it saves the trouble of having to upgrade later on.

Mild to Wild: The Power of the Paddles

One of the design goals JR had for the Venture CP was to give it extra capabilities a beginner could "unlock" after learning the fundamentals. They did this by providing an extra set of flybars and paddles. The paddles that come installed on the Venture are heavier and thicker than those used for more advanced maneuvers and soften the sensitivity of the controls nicely. This makes learning fundamental maneuvers, such as hovering, takeoff, and landing much easier.

Once they've mastered the basics, Venture owners can install the lighter, thinner paddles that are included for aerobatic maneuvers. This conversion takes as little as 30 minutes and involves nothing more than installing the new parts and tweaking the radio's CCPM mixing. The Venture's expertly written manual takes you step-by-step through the whole conversion process. After installing the high-performance paddles, Venture CP owners will be able to fully appreciate the crisp responsiveness that only JR's CCPM can provide. Inverted hovers, tail slides, rolls, and loops can all be performed with more precision than a conventional heli because fewer mixing parts means less slop in the control system.

Whether you're a novice or an accomplished heli pilot on a budget, JR's new Venture CP has the design features you need. From the rock-solid responsiveness of CCPM to the smooth operation of ball bearing supported controls, the Venture CP is anything but a stripped down heli. You'll also enjoy the support of a nationwide network of retail hobby shops that offer parts and service for all JR products.

Engine, radio, muffler and other accessories are not included. Please refer to the manual for details.

Technical questions about this JR product should be directed to JR AMERICAS Support Department:

Horizon Hobby, LLC no longer provides service for JR products. For service needs please contact JR AMERICAS at 217-352-7959 or by email at customerservice@jramericas.com