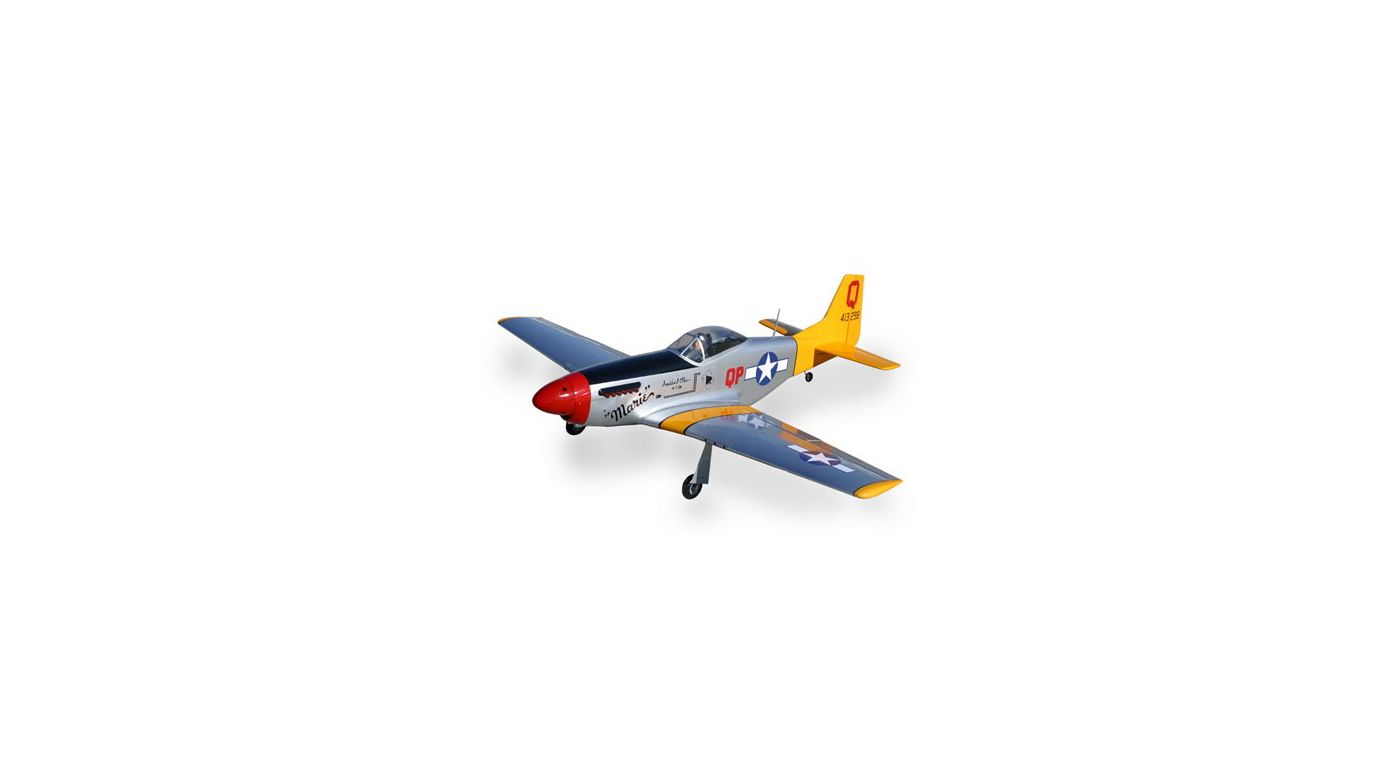 Among warbirds, North American’s P-51 Mustang is arguably the most revered fighter of it’s era. For many RCer’s, the Mustang represents that "ultimate someday project" that modelers often dream about but never seem to find the "hundred or so hours" it takes to build a good one. You know, one that’s big, has flaps, all those scale details and markings and of course retracts. One that’s lightweight so it flies well and one that’s built to a level of quality that will make you proud to show your buddies.

Now Hangar 9™ is making that ultimate someday project a next weekend reality. Hangar 9’s new 150-size P-51 Mustang can literally have you in the air next weekend, flying a large, fully decked-out scale Mustang that will have your flying buddies drooling.

It’s in the details
Hangar 9’s 150-size P-51 spans a large 77“, making it the perfect size for 1.50 through 2.00 4-strokes or 1.20 through 1.80 2-strokes. Hangar 9’s Mustang features all wood built-up construction with a fiberglass chin cowl. Plus retracts are included and come pre-installed in the wings. Scale flaps are also included, adding not only to the scale presence but significantly reducing landing speeds. Plug in stabs on aluminum tubes are utilized, while the one-piece wing bolts in place using 4 screws.

The Mustang is 90% pre-built and can be finished ready to fly is about 18 to 22 hours. Building involves gluing the wing halves together, hinging the control surfaces, installing the stabs on pre-aligned stab tubes, attaching the canopy and installing the radio and engine. To finish up just add the included final scale touches like the boom antenna, molded exhaust stacks and machine gun barrels at the leading edge. Then sit back and admire. All hardware (less spinner) is included. All structures are built of balsa and ply, using CA and epoxy glues. Build quality is excellent, on par with what you’d expect from a custom build and, like other Hangar 9 airplanes, covering is expertly done in genuine Hangar 9 UltraCote®.

Flight Test Report from R&D Manager John Adams
This Mustang flies beautifully! At 13.60 lbs the Saito 180 rips the P-51 through the sky! The recommended elevator throw gave an incredibly tight loop diameter of 35 ft at full throttle with no signs of high-speed tip stalling. I could bank and rip incredibly tight pylon turns with full up elevator without losing heading. Outside turns were equally tight with no snapping issues. This is one fun bank and rip airplane!

Stalls: As the slow speed stall was approached at idle and full up elevator the nose would wander slightly in yaw. When the stall did occur the nose would drop slightly then the P-51 would continue on it’s way with little loss of altitude or heading. Slow speed handling is awesome with this aircraft. Not what you’d normally expect from a warbird. We could do nose high tail-toucher landings with ease and confidence. With the recommended control throws the stalls were tough to get into and were very soft.

Flaps: We set up two-position flaps on this sample. Take-off flaps are 15 degrees down and full flaps are 38 down. Surprisingly, At ½ throttle or less, minimal pitch trim was noted in either flap position. At full throttle, full flap gave a slight up pitch trim change. We would recommend no elevator compensation with flaps in this model. Full flaps were very effective plus they look cool on approach! Full flaps also cause the P-51 to fly at a more nose down pitch angle. We tried stalls with half and full flaps and the P-51 was even more stable and more difficult to stall mushing around nose high. We made several full flap approaches and a few full flap landings, touching down with full up elevator, finding the P-51 extremely stable and easy to land.

Summary
The Mustang is awesome! With the Saito 180 this is one powerful fast but easy to fly airplane! Weighing just 13½ pounds, this P-51 flies more like a well-mannered sport airplane than a scale warbird. Gentle, predictable slow speed handling makes this a perfect candidate for intermediate flyers. "I want one for myself!" exclaimed John Adams.

What engine should I choose?

Choose the lightest weight, highest power engine you can find, within the engine recommendations. The Saito 180 is a very good choice for this plane.

What radio system should I choose?

You can use any 6-channel radio system.

What servos should I choose?

Standard servos are more than adequate for the plane. But keep in mind that the better servos you use, the better the plane will fly. You will also need 2 low profile retract servos.

Since the P-51 is a semi-scale model it has been optimized to fly very well, but it does still have some qualities that make it a plane for relatively advanced pilots. Because of this, a beginner should not fly it! It does land very slowly for a plane of its type, and does perform very well.

What pilot figure will work in the P-51?

The bend is necessary to allow the pushrod to go up and over the retract wheel well. Bend the pushrod approximately the same amount as shown in the picture. The amount of bend is not critical.

Be absolutely certain that the gear is locking in both extended and retracted positions. If they do not fully lock in each position, adjust the distance out on the servo until they do. Move out on the servo for more movement, and in for less movement. If you look at the retract mechanism while extended, you will see a metal pin that locks the retracts in each position. Be sure this pin is up against the wall of the retract for a secure lock and to prevent the gear from collapsing on landings. Give the gear a good test also to be sure that the gear is locked.

Be carefull to not scratch the paint on the air intake when removing the excess tube.

Do a pull test on the stabilizer halfs to be sure the screws are engaged in the tube.

Position the steering arm on the tail gear wire at an angle such that there is sufficient movement of the tail wheel in both directions without making contact with the former that the tail gear mount is installed.

Use great care to drill the holes for the rudder control horn threaded rods at 90 degrees to the hinge line and parallel with each other to ease installation of the threaded rods.

Control Throws and Center of Gravity

The CG point is 6 3/8” back from the very front of the leading edge of the wing, where the wing meets the fuselage. Be sure your P-51 balances at this point. Using a Saito 1.80, I placed the battery beside the tank, and added 6 ounces of lead above the engine on the fuselage. Move the battery around if possible to avoid adding weight.