Print Nevermind
This item is no longer available
Important Bulletin
Important Bulletin
It has come to our attention that the instruction manual has the incorrect phone number for Horizon printed on the back cover. Should you need to contact Horizon Hobby's customer service regarding these or any models, please call 217-355-9511 and not the number listed on the back cover of theses manuals. We apologize for any inconvenience this may have caused. 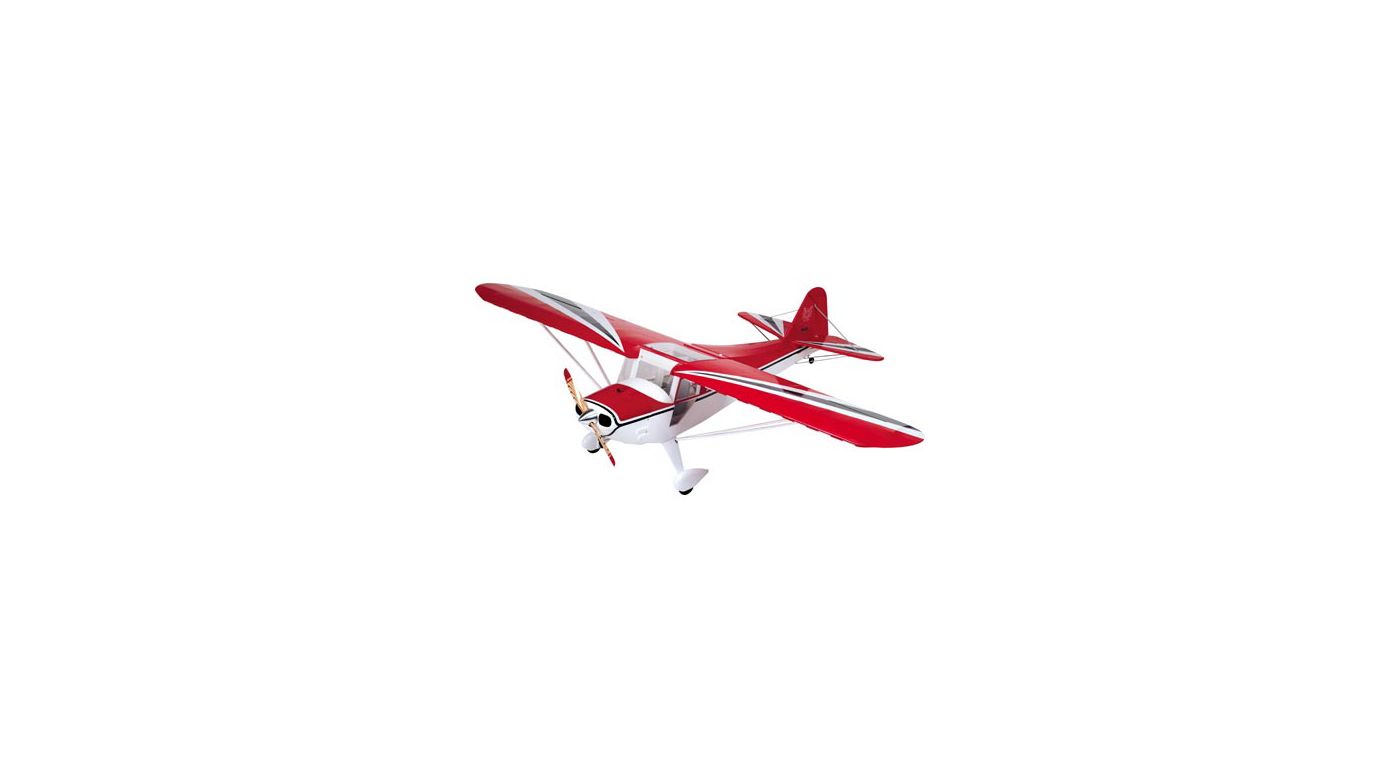 Hangar 9's new Clipped Wing Taylorcraft ARF is a replica of a one-of-a-kind full-scale airplane built by renowned aircraft restoration expert, Jim Moss. Jim based much of his work on plans for a clipped-wing T-Craft that was flown by Margaret Ritchie when she won the National Aerobatics Advanced Class title in 1961. Ever the innovator, Mr. Moss added a few distinct touches of his own to the design as well. The result was an extraordinary aviation classic that is the only one of its kind in the world.

Hangar 9 has reproduced this Moss masterpiece in stunning scale-like detail. The centerpiece of these scale good looks is the prepainted cowl that comes with the intakes and air scoops already cut and smoothly finished. Simulated louvers are molded into the fiberglass for added realism. Other scale touches include a custom pilot seat, prefinished wheel pants, and an expertly applied trim scheme.

As with every other Hangar 9 ¼-scale ARF, the kit is covered in genuine UltraCote from wing tip to tail. Even the checkerboard pattern on the bottom of the wing is available in rolls of UltraCote. Thanks to the widespread availability of this covering, modelers making repairs should have no problems finding the right colors to match the original trim scheme.

The kit comes 90% prebuilt from balsa and ply, and includes all necessary finishing hardware. Even with all the scale goodies to put on, the T-Craft doesn't take any longer to assemble than any of Hangar 9's other ¼ scale kits. Twenty-four hours is about all anyone should need to finish the model.

A wide variety of gas and glow engines fit in the T-Craft's well-ventilated cowl without a lot of extra trimming. For the "cost is an object" crowd, MDS's 1.48 2-stroke will do nicely. Those with a little more scratch might want to consider a 4-stroke Saito 1.20, 1.80, or 1.82 twin. Zenoah's gasoline powered G-23 also fits nicely, providing scale-like performance similar to the 1.20, but with a little more weight.

We flight-tested the Taylorcraft with the Saito 1.80 and Zenoah G-23. The 1.80 was unquestionably the "big dog" when it came to power allowing the plane to seemingly defy all physical laws. It made light work of vertical maneuvers, knife-edge flight, and hovering torque rolls. If you're looking for a nice scale model that can transform into a high-performance aerobat with just a jab of the throttle stick, this is the route to go.

Bolting a G-23 to the firewall provides a whole different set of thrills. Its heavier weight turns aerobatics with the T-Craft into extremely enjoyable exercises in the type of energy management maneuvers full-scale pilots perform. Standard rate snap rolls, barrel rolls, loops and spins all mirrored full-scale behavior to a "T". In addition to the scale flight behavior, being able to fly all day on about two bucks worth of gasoline, also makes the G-23 an appealing choice.

Regardless of the power plant we used, three-point landings culminated with full-up elevator and the plane simply mushing onto the runway tame as a kitten. Control authority was excellent all the way to touchdown with no nasty tip stall tendencies at all. We had a blast just putting around the pattern at reduced power, shooting touch and goes, and simply admiring the scale appearance along with everyone else at the field. If you get one just to do this, we will completely understand. This beauty is definitely a head-turner.

Hangar 9's one-of-a-kind Clipped Wing Taylorcraft ARF is a wonderfully refreshing diversion from the beaten path. Its combination of pleasing flight characteristics and exceptional scale looks should find a large following among 3-D and sport pilots alike who are looking for something a little out of the ordinary.