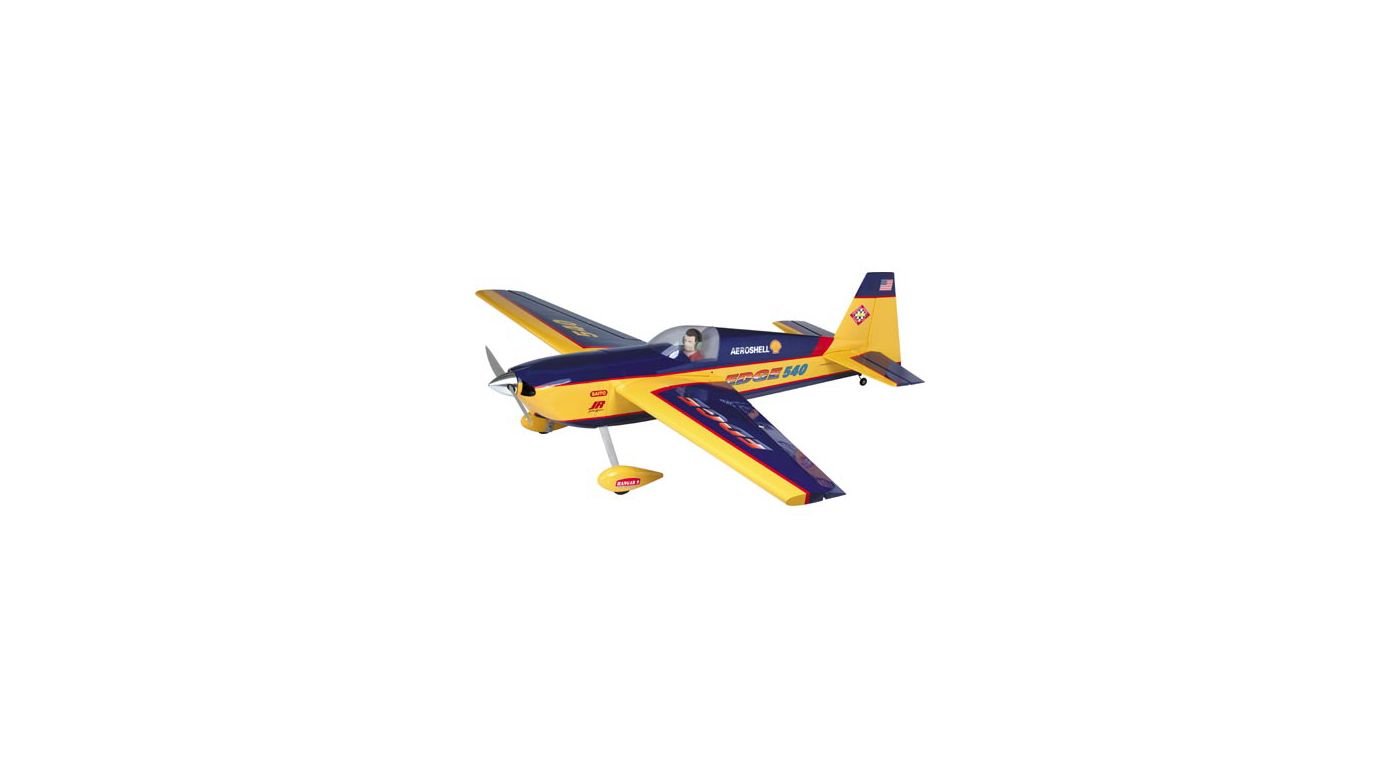 The Pitts, the Extra, the Sukhoi, and the Cap 232-these super planes have forever left their mark on the full-scale aerobatic world. So what's the next generation aerobatic airplane going to look like? Many full-scale and modeling experts believe it's already arrived. With its unique straight leading edge profile and the fact that the thrust line, wing, and stab are close to inline, many believe that Hangar 9's Edge 540 has the right ingredients to be the next Extra or Cap 232. In fact at this year's IMAC Nationals, the Unlimited class winner flew an Edge 540.

Hangar 9's Edge 540 follows in the successful footsteps of the Hangar 9 Cap 232. The 78" span 1/4 scale Edge comes prebuilt in all balsa and ply and is covered in blue and yellow Goldberg UltraCote®. The Edge features a prepainted fiberglass cowl and wheel pants and T6 aluminum landing gear. Assembly takes about 18 hours. Parts quality, fit, and finish are excellent, as are glue joints that are epoxy and CA (no hot glue).

We built our test model using a Saito® 1.80 and JR 8101 servos with an 1100mAh battery. All up weight was 11.7 pounds. With the wing, stab, and thrust line all inline, the Edge 540 is symmetrically arranged and should offer superior aerobatic precision and performance with perfect axial rolls and little or no rudder coupling. Its over-size control surfaces offer plenty of authority for the wildest 3-D maneuvers.

We were amazed at the vertical performance that the Saito 1.80 gave the 11.7-pound Edge on our first test flight. We could do numerous vertical snaps then accelerate straight up on line. The Edge would hover at about 1/2 throttle then accelerate aggressively straight up when full power was added.

On future flights we ran through the IMAC Unlimited maneuver schedule many times and were impressed with the Edge's stability and ability to accurately stop on point from snaps. Only a slight amount of rudder to up elevator mixing was needed for perfect knife-edge tracking while slow and point rolls were smooth, axial, and easy to keep on line.

To show off its 3-D cabilities, we enlisted TOC pilot Mike McConville. With maximum 3-D rates, Mike put the Edge through its paces: hovering Torque Rolls down to the ground, super stable nose-high Elevators, Tumbles, Waterfalls, and a Blender that wraps up so tight it's literally a blur. Mike sure made the Edge look good and said it was one of the easiest airplanes of this size that he's ever 3-D'd.

But don't think that this is a wild, tough-to-control thoroughbred. The Edge is very stable at slow speeds with gentle stalls that result in the nose dropping slightly. Pilots who are comfortable with sport/stick type airplanes will find the Edge easy to fly.

If you're just wanting to get started into aerobatics, looking for an IMAC competition airplane, or are looking for a wild 3-D airplane that will do it all, check out Hangar 9's Edge 540.