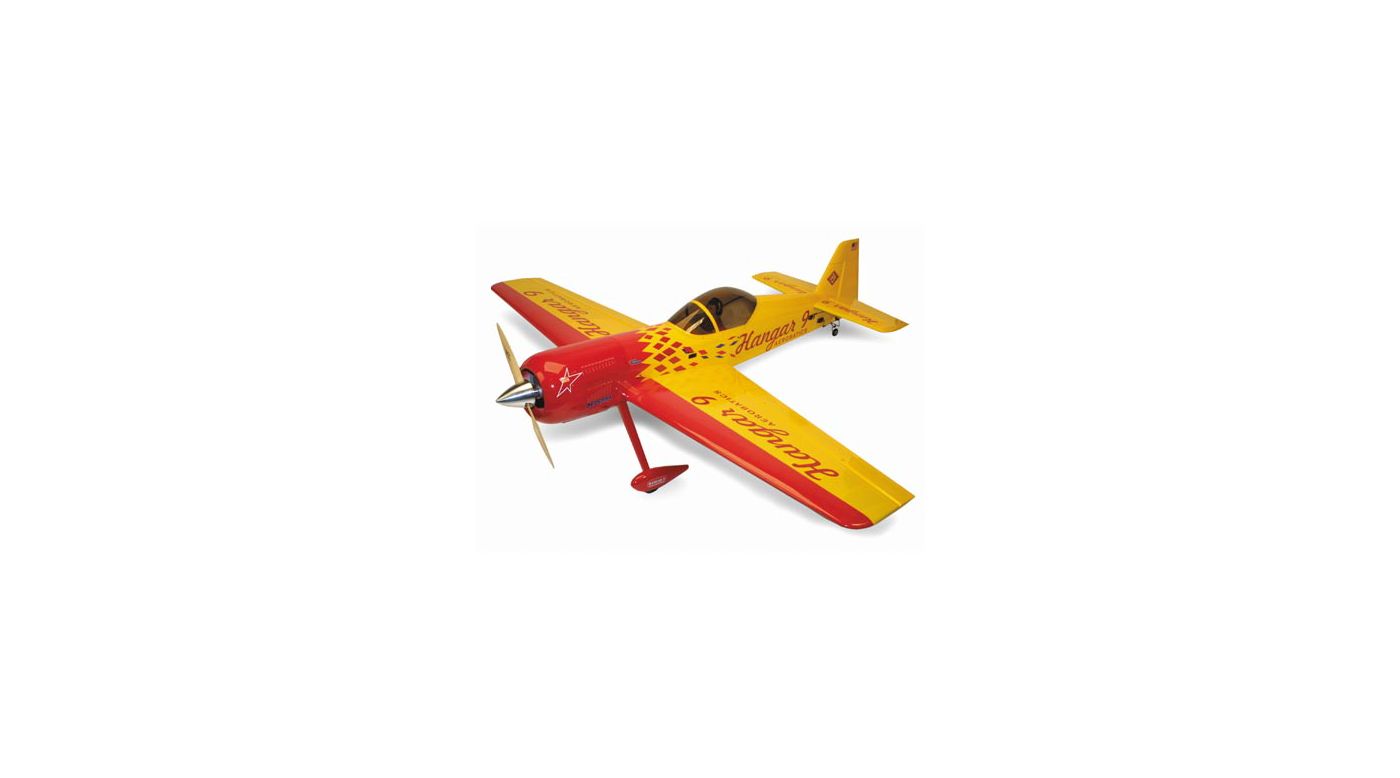 Since the introduction of the Extra 300 and Limited Edition Cap 232, Hangar 9® has gained valuable experience and improved their design and manufacturing techniques. The Sukhoi is Hangar 9's latest 33% aerobatic release.

The Sukhoi is significantly lighter, typically weighing in at 24 pounds ready-to-fly. All critical alignments, like stab and wing incidence, are set at the factory on precision jigs. Quality, fit and finish is also greatly improved. The all balsa-and- ply structure is built in precision jig, using high-quality CAs and epoxy. The built-up jig built wings feature two servo pockets cut in each wing half, offering two servos per aileron control for positive roll authority.

The fiberglass cowl, aluminum landing gear and wheel pants are professionally finished, using base coat and clear coat automotive paint. The structure is professionally covered and trimmed with Hangar 9 UltraCote® in the distinct Xavier De Laparent red-and-yellow diamond trim scheme. In fact, the quality of the Sukhoi is at a level that compares more closely to custom-built airplanes rather than ARFs.

Assembly takes just 15 short hours and mainly involves radio and engine installation and hinging the control surfaces. Hardware is not included with the Sukhoi, allowing experienced modelers to choose their hardware preferences. However, Hangar 9 offers a hardware completer package that includes Robart hinges, control horns, aluminum servo arms, titanium links, wheels, a fuel tank, throttle linkage and all the needed nuts and bolts to get your Sukhoi in the air.

Engine Selection
Choosing the right engine for a performance aerobatic airplane is critical. Knowing your expectations before you buy is important. Our staff has flown the Sukhoi using the Zenoah G62, the Zenoah GT80, the ZDZ 80 single and a DA100. For sport modelers wanting to cruise the skies and do basic aerobatics, the Zenoah G62 is a reliable, economical choice that can handle loops, rolls, hammer heads or anything with limited vertical. A 20x10 prop is recommended, and with this combination, expect to add significant nose weight to achieve the recommended balance point. No, it won't hover with a G62, and it doesn't have unlimited vertical, but this combination makes a nice sport flyer's dream machine.

The Zenoah GT80 is a great choice for more performance minded modelers. In fact, the firewall is set up for this engine, and the instructions show its installation. Swinging a 24x10 Mejlik or Bolly gives enough thrust to comfortably hover at about ¾ throttle. The GT80 twin is smooth with minimal vibration, plus its self-contained ignition means low maintenance and no ignition batteries to charge! For IMAC competitors, this is a great combination for the sportsman, intermediate and even advanced flyers. One of our early production models had a GT80, and the Sukhoi balanced properly by moving the receiver battery forward with no added weight.

The ZDZ 80 single is a powerhouse. Mike McConville installed one of these in his Sukhoi and flew it most of last season. In fact, he won an IMAC contest near St. Louis [see article]. The ZDZ's got plenty of power to hover and do nearly every 3D maneuver you can dream of. Being a big single, it's a shaker. Screws and parts may routinely loosen throughout the flying season, so if you choose this combination, expect to check that all parts are tight from time to time. The ZDZ is one of the lightest engines in its class. Some modelers are moving the rudder servos to the center of the fuselage (from the tail) and use pull-pull cables to help move the C.G. forward. Even so, expect to add over a pound of lead to the nose to get the balance point right.

While it's out of the recommend engine range, many customers are choosing to install 100cc engines in their Sukhois. Our R&D manager John Adams installed a DA 100 in his, and while it obviously has tremendous power, it's extremely important to properly throttle manage (read throttle back) or you could easily blow up the airplane. The DA100 is a very tight fit, and holes need to be cut into the cowl to provide clearance for the spark plug caps.

Getting the cowl to clear over the mufflers and plug caps is a trick that will be tough for even experienced modelers, but it can be done. Patience and careful cowl cutting is required. We originally used a Mejlik 28x10, but this gave minimal ground clearance. One of the new 3-bladed 24x10 carbon props from Desert Aircraft is a better choice and looks cool. Just remember, if you choose this powerful combination, you must throttle manager on the down lines, and since it's out of the recommended engine range, the warranty on the airplane is void.

How it Flies
The Sukhoi features an Eppler 169 airfoil. This airfoil offers greater stability at slow speeds and also improves some 3D maneuvers like the Harrier, high alpha rolls and Wall, preventing tip stalling. Because the wing, stab and thrust are nearly in-line, (as compared to the CAP232), the Sukhoi is a more true-flying airplane, requiring less rudder-to-elevator and aileron corrective mixing. Some up-mixing is required. The values are listed in the instructions.

For precision aerobatics, the Sukhoi is superb. Our engine manager Pete Bergstrom managed a 5th place finish at the 2002 IMAC nationals borrowing Mike McConville's Sukhoi just weeks before the event. He says it is the truest flying plane he's ever flown. As for 3D performance, just ask anyone that's seen Mike McConville do his Sukhoi 3D demos!

We do not recommend any engine over 80cc.  Anything larger will void the warranty on the plane and can lead to failures.  It really flies better with a lighter engine anyway.  For customers who want super power, it is best to use a lightweight 75 or 80cc engine such as the 3W or ZDZ.  We recommend the G-62 for sport flying or the GT-80.  The G-62 will fly the plane but vertical performance is limited.  The GT-80 will give good performance, but at some altitudes and in hot and humid weather the performance will be limited.  You may have to change the length of the firewall if a shorter engine is used.  1? diameter hard wood dowels work very well as spacers for the engine, just cut them to the length needed.

What servos should I use?

You will need 80 oz in of torque or better for the elevator and rudder.  A 60 oz in servo or better will be needed for the ailerons.  Keep in mind that the better servos you get, the better the plane will fly.

What radio system should I choose?

It is recommended to use a PCM system with gasoline engines.  This will help prevent any interference issues that may develop.  A computer radio is definitely encouraged, as it will greatly simplify the setup of the plane, and you will be able to use the radios features to your benefit to improve the flight qualities of the plane.

What can be done to increase the performance of the plane?

Using a computer radio, you can mix elevator and aileron to rudder to make knife-edge track straight.  Also you can mix elevator to spoiler on a switch to aid in elevator and harrier maneuvers.  Keep in mind the lower the weight of the plane; the better it will fly, so keep additional weight to a minimum.  Also a lightweight, a high power 80 cc engine will give the best performance.

What hardware pack do I need for Hitec servos?

We do not have a hardware pack for Hitec servos.  You will need to purchase hardware individually.

What is the diameter of the cowling?

At the widest point, it is around 10" wide, but does narrow forward and back of this point.