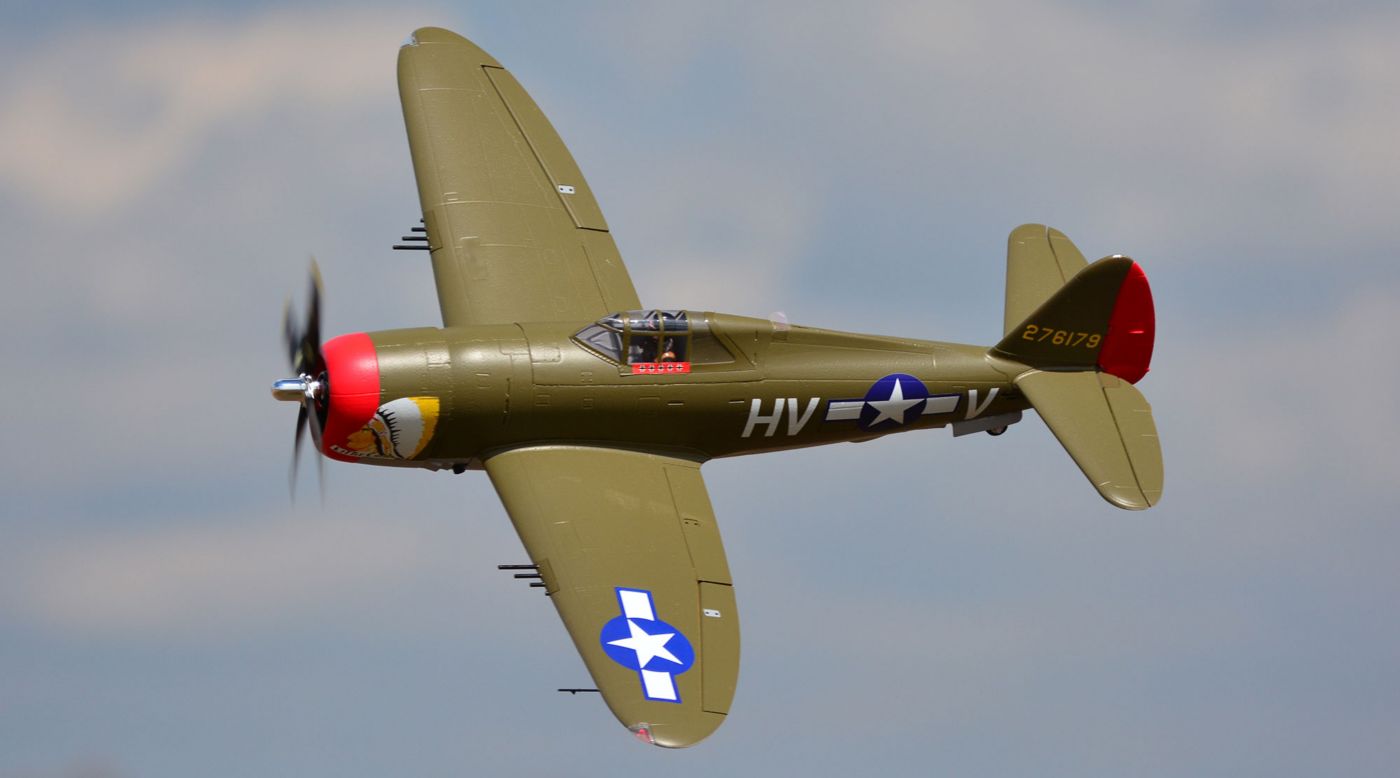 The perfect size with great power and unlimited climb. Using the latest in FMS technology the P-47 has the new KV800 motor which supports three bearing shaft suspension, FMS 70 Amp ESC with 5 amp SBEC, and the ability to use either 3 or 4 S batteries. You can also choose the standard speed which with 35A ESC and 3536 motor.

The High Speed Razorback gets its name from the ability to use two different props, the standard 4 bladed scale for speeds up to 85 Miles Per Hour (MPH) to the optional 2 bladed, which can give you speeds of over 100 MPH. The High Speed Razorback, manufactured using lightweight but highly durable EPO foam, comes equipped with 4 metal gear digital servos. Ball link connectors are used replacing the traditional clevis for a more positive link to control surfaces, and two carbon fiber spars in the wing for added strength when making those “High Speed” passes over your flying site.

The High Speed Razorback is a great flying tribute to the P-47 family, from takeoff to gentle landing, you will enjoy the flying characteristics.

The Republic P-47 Thunderbolt was the largest, heaviest, and most expensive fight aircraft in history to be powered by a single piston engine It was heavily armed with eight .50-caliber machine guns, four per wing. When fully loaded, the P-47 weighed up to eight tons, and in the fighter-bomber ground-attack roles could carry five-inch rockets or a significant bomb load of 2,500 pounds; it could carry over half the payload of the B-17 bomber on long-range missions (although the B-17 had a far greater range). The P-47, based on the powerful Double Wasp engine, was to be very effective as a short-to-medium range escort fighter in high-altitude air-to-air combat and, when unleashed as a fighter-bomber, proved especially adept at ground attack in both the World War II European and Pacific Theaters.

The P-47 was one of the main (USAAF) fighters of World War II, and served with other Allied air forces, notably those of France, Britain, and Russia. Mexican and Brazilian squadrons fighting alongside the U.S. were equipped with the P-47.