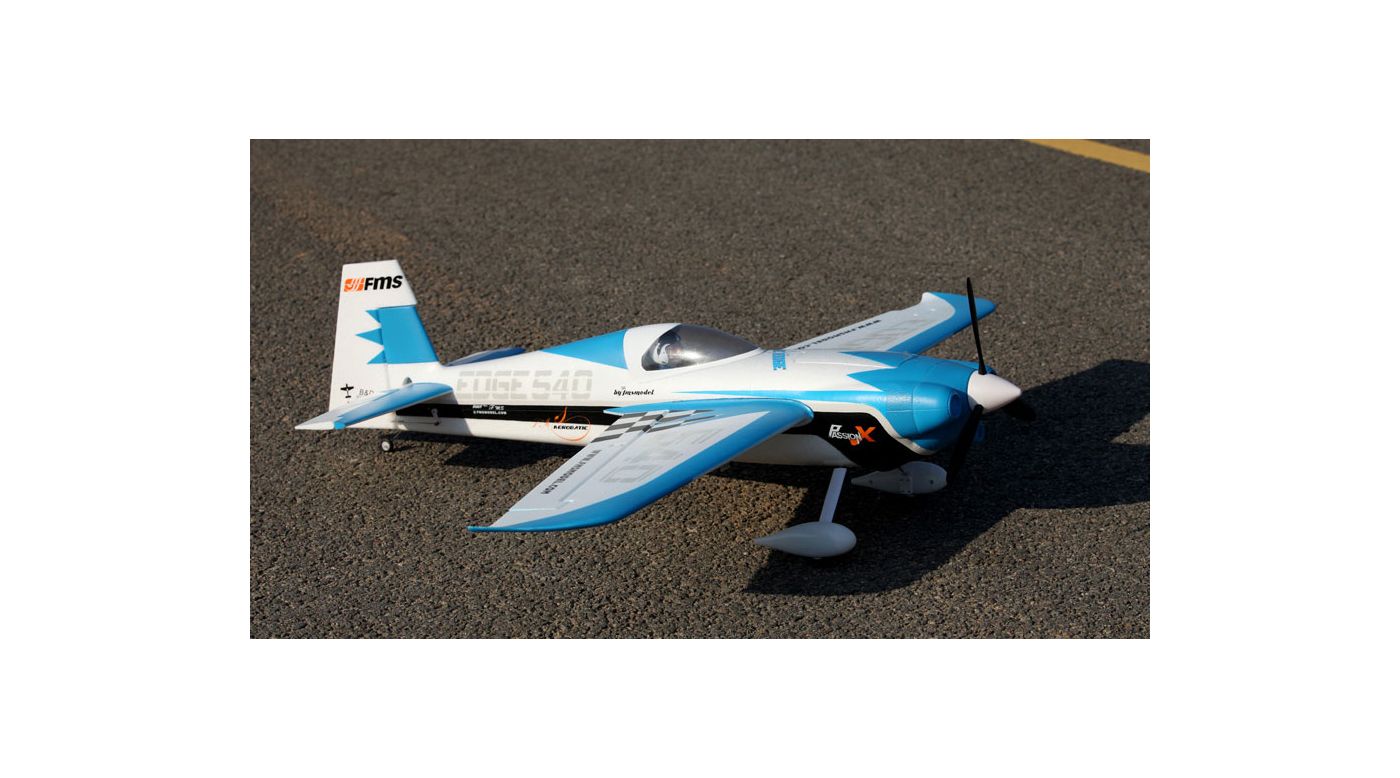 The Zivko Edge 540 manufactured by Zivko Aeronautics  is a highly aerobatic aircraft . Capable of a 420 degree per second roll rate and a 3,700 foot per minute climb rate, it has been flown to victory on the international Unlimited aerobatics circuit several times since the mid-1990s. A tandem-seat version is sold as theEdge 540T. The Zivko Edge 540 is the most common aircraft used in the Red Bull Air Race World Series – in fact all champions of the World Series have flown this aircraft

The new Edge 540 is the best plane FMS has engineered to date in its line of aerobatic models. The performance this plane delivers on 4s power is just amazing! Build a scale model that has the performance envelope of this kit is nearly unheard of in this size plane. It is happy wide open eating up the sky or in high alpha flight hanging on the propeller. At high speed, tracking is predictable and literally flies like it is on rails, just point it where you want it to go and she goes with no complaint. We found no bad characteristics even with very hard control inputs in hard banks. The new composite wing structure is very ridged and it shows in high G turns and dive pull outs. Simple pull back on the throttle and the 540 treats you with tons of lift with NO tip stalls or washout propagation as experienced in other planes in this size.  Doing hovering, waterfalls, and harriers are delightfully fun.

The new 17 g digital servos worked flawlessly, providing precise control even under very high load. Their ability to center precisely even after hard high load maneuvers was right on par with servos at a much higher price point.  The new “Gold” 760Kv motor and 60A ESC combination performed flawlessly.

The build of this plane is very straight forward. All surfaces and screws aligned with their threaded surfaces. Plastic joints were perfect and the carbon wing spar fits perfectly into its sleeve. The wing mounts overlap and the rudder uses 3 nylon hinges which makes for an extra strong design. All 17g metal gear digital servos are the highest quality servos we have seen on any PNP plane to date. Mounted in pockets which have a screw on cover allows for easy servo horn changes and or adjustments. There is easy access to the ESC and the design of the 540 allows for more than adequate cooling. All the servo connectors are clearly labelled making installation of your radio system a snap.

Quality along with its fit and finish makes for one great flying machine.