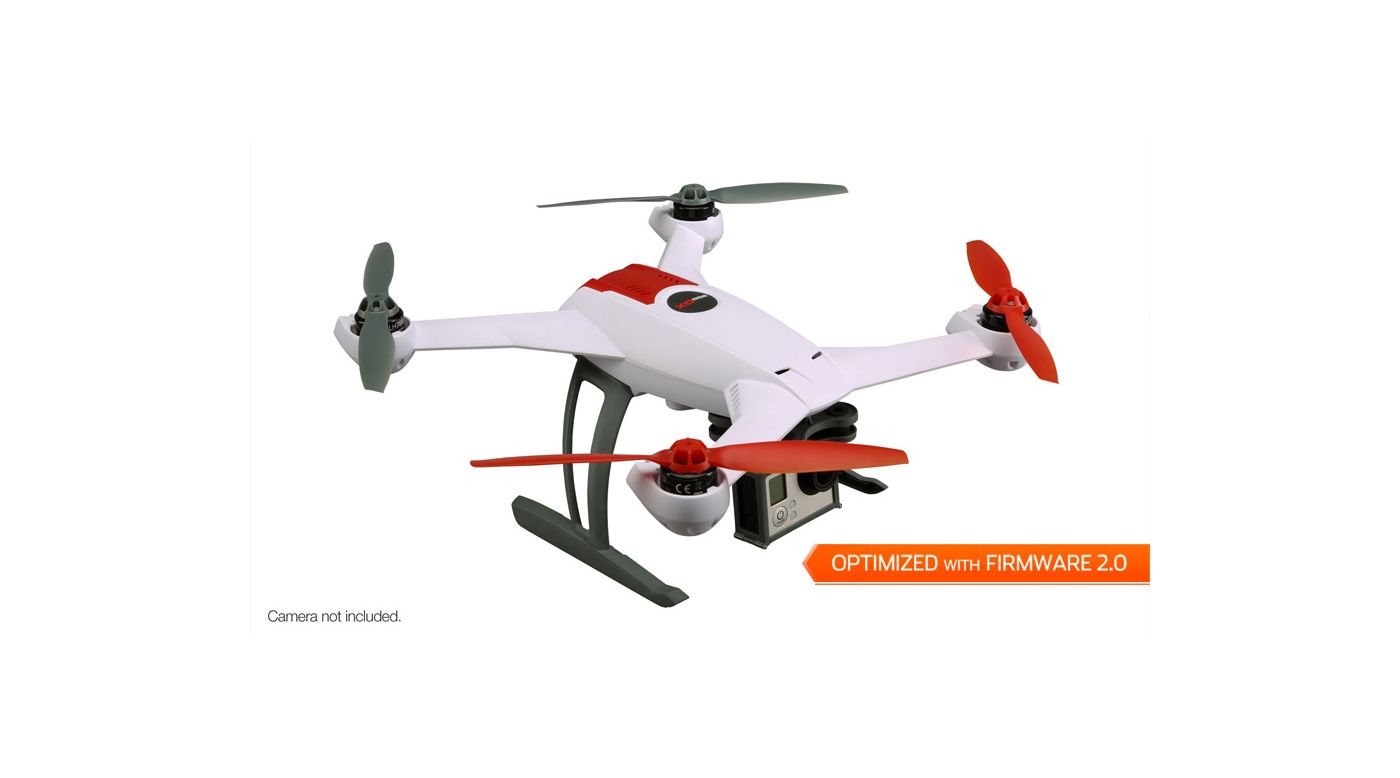 The Blade® 350 QX quadcopter has been updated with Firmware 2.0 to provide the best experience. This firmware update facilitates a new flight mode configuration as well as a refined starting procedure. Additionally, the firmware update improves GPS and compass performance during preflight and flight.

Refined Start Procedures
There are now two options to start the motors:

Compass and GPS Error Detection
The Firmware 2.0 update prevents GPS and compass errors from causing adverse flight conditions. The status LED blinks orange if the compass senses a magnet or metal object nearby.

New Charger
This version comes with a new 12V DC accessory charger that plugs into a 12V auxiliary power port, like the one found in your car. This charger functions exactly the same as the original charger but has a 12V DC accessory power connector instead of DC alligator clips.

This version of the 350 QX has been optimized with firmware Verion 2.0. Firmware 2.0 facilitates a new flight mode configuration as well as a refined starting procedure and includes GPS/Compass error detection. Additionally, version of the 350 QX includes and an improved charger. SAFE™ (Sensor Assisted Flight Envelope) technology provides unprecedented protection with the SAFE Circle and more.

SAFE™ (Sensor Assisted Flight Envelope) technology is a revolutionary electronic flight envelope protection system. It also offers smoother flight capability that battles windy conditions for you and multiple modes so you can fly with the level of protection and assistance that suits any given moment of the flight.
Learn More

Move the cyclic stick on the transmitter right or left, and the 350 QX will move right or left relative to the pilot regardless of which way it's pointing (Smart Mode only).

Never worry about flying too close to yourself with this invisible pilot barrier (Smart Mode only).

Aerial Photography mode gives the 350 QX softer self-leveling characterisitcs to ensure the best footage possible from the onboard camera. AP mode also activates position holding capablilities allowing the 350 QX to lock into a desired GPS and altitude when the sticks are released.

While in Smart Mode, SAFE technology engages the innovative SAFE Circle™ which prevents the 350 QX from flying too close to its pilot. When in a hover, GPS and altimeter sensors keep the quadcopter in a consistent stable position. The Stick Relativity feature allows the 350 QX to follow the directional inputs from a pilot regardless of the orientation of the quadcopter.

In Stability Mode, SAFE technology limits the flight envelope of the 350 QX and enables self-leveling characteristics for consistent level flight even when pilot input is abruptly removed from the control sticks. In Stability Mode, GPS Position Hold is active when the pilot stops providing stick input.

The 350 QX utilizes AS3X flight characteristics to deliver a robust flight experience. While flying in Agility Mode, the 350 QX can perform aerobatic maneuvers with extreme stability thanks to SAFE technology. Agility mode can only be activated by a DX6i transmitter or higher.

GPS and altimeter sensors in the 350 QX provide the ability to remain in a specific position for stable aerial footage and peace of mind.

During flight, with the flip of a switch and without any stick input from the pilot, the 350 QX will automatically return home to where its motors were started.

Thanks to four 1100Kv brushless motors and ample power from a 3S 2200mAh 30C Li-Po battery, the 350 QX has more than enough power to carry a GoPro® camera*.
An anti-vibration camera mount** is included with purchase.

*Camera not included.
**Designed for use with GOPRO® products. GOPRO® is a registered trademark of Woodman Labs, Inc. in the United States and other countries.

For owners of the original 350 QX (BLH7800/BLH7880) an optional upgrade solution for the firmware will be available by early April for a nominal fee. More information will be available on bladeheli.com in late March once details are available

Nothing, everything you need is included!*
* If you wish to charge the included battery from an AC power source, you will need the optional power supply

How to install the copper shielding

Technical questions about this Blade product should be directed to Horizon Hobby's Product Support Department: